For a Social Cause and Artist Talk 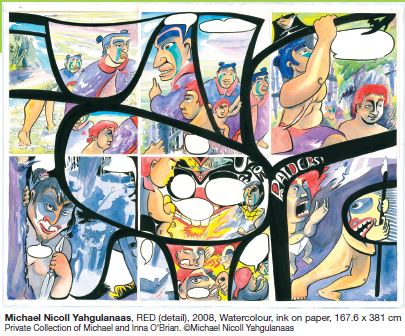 For a Social Cause brings together three disparate graphic novels to explore how this genre has been used to raise awareness about the human condition. Poignant and sequenced illustrations tell tales of strife, triumph and loss that convey moral lessons to those who pay attention.

Lawrence Hyde’s Southern Cross: A Novel of the South Seas, is a dramatic black and white wordless graphic novel of a young family trapped on a Micronesian island during an atomic bomb testing alluding to the unthinkable aftermath. Haida artist Michael Nicoll Yahgulanaas mixes traditional Haida imagery with Japanese Manga in Red, a tale about a warrior-leader who is consumed by vengeance. Brampton’s own comic strip enthusiast Ricky Lima and French graphic artist Nicolas Londeix team up to create Happily Ever Aftr to bring a modern twist to a conventional narrative of romantic conquest.