Finding and Keeping a Doctor

A young woman with a painful sore throat waits her turn at the triage desk in the emergency department of Headwaters Health Care Centre in Orangeville. Without a family doctor,…

A young woman with a painful sore throat waits her turn at the triage desk in the emergency department of Headwaters Health Care Centre in Orangeville. Without a family doctor, the emergency department or an after-hours clinic are her only options. The waits at both can be dispiriting, and using the ER as a walk-in clinic is not uncommon. As many as one-quarter of Dufferin and Caledon residents – 25,000 to 30,000 people – are currently considered “orphan patients” (patients with no family doctor).

Remarkably, the community in Dufferin and Caledon is “under-serviced,” according to the criteria set by the Ministry of Health and Long-Term Care. The designation is based on physician-to-population ratios. The ministry’s formula for a fully serviced area is one doctor – including all specialists – to 1,385 patients.

It’s a designation you might expect for a northern outpost, but not for this relatively prosperous community which has an impressive new hospital and which is within a short drive of one of the country’s largest cities.

In fact, our region is among 101 under-serviced regions in southern Ontario.

For the first quarter of 2006, the ministry reported 660 vacancies in southern Ontario’s designated complement of general and family practitioners (GP/FPs). Dufferin/Caledon reported 11 vacancies, a shortfall of 20 per cent in its full complement of 55. But that figure has now grown to 14 vacancies (due to retirements and doctors moving from the area.)

The 2006 figures also showed Wellington County with a shortage of 11 GP/FPs, but that is only 10 per cent of its complement of 108; the Town of Erin was short just one out of six.

The province has undertaken several initiatives to redress the shortage, including the establishment of Family Health Teams and increasing the income potential of family doctors through bonuses and incentives, increasing the number of university placements available for medical students, and improving opportunities for foreign-trained doctors.

But with stiff competition among so many under-serviced regions, the local community has not been cooling its heels waiting for the provincial measures to pay off.

The Greater Dufferin Physician Search Committee is a volunteer organization that is hard at work attempting to entice doctors to the region.

“We are a tool for the medical community and for the hospital to help recruit doctors,” emphasizes committee chair Louise Kindree. “We’re not the ones who sign on the dotted line to hire them.”

Established in 1997, the committee originally served both Caledon and Dufferin, but a few years ago, the Town of Caledon withdrew its financial support, in favour of what Norm Lingard, manager of economic development, calls a “made-in-Caledon” solution. That was in part because Caledon is served not only by Headwaters Health Care Centre but by other hospitals in Brampton and Etobicoke, notably the new Brampton Civic Hospital, scheduled to open this year. Caledon has just recently constituted a volunteer search committee.

In Dufferin, under the auspices recruitment chief Dr. David Scott, a retired surgeon, the committee publicizes local medical opportunities, serves as a welcoming committee to potential doctors, assists the medical community in supporting new physicians, and carries out a retention strategy.

The committee also runs the patient registry. Now in its fourth year, it connects patients with available family doctors. It currently includes the names of some 2,000 families and individuals, who can expect a wait of up to six months.

Six more students are scheduled to attend this June’s Rural Medicine Week. Previous events, such as a canoe trip, a barbeque at a horse farm and a dairy farm visit, will be repeated. And students will have more free time to research their own interests in the community.

The search committee also sponsors a program for students from the Dufferin/Caledon area in their third year of medical study. For two weeks the students shadow doctors and visit local health organizations. The hope is the students will be impressed by the job potential within their home community.

Rebecca Glassford, a rural Caledon resident, attended last year’s program. “Prior to completing the program I was rather averse to returning to small town life,” she says from Vancouver where she studies. “The program has made me reconsider. All other things being equal, I would now rather work in a rural setting over an urban one.”

Kelly McGuire had not considered her preference before participating in the pre-med program. Raised in Orangeville and Inglewood, she currently enjoys a similar small town environment at Nova Scotia’s Acadia University. “After participating in the program I have a great feeling about pursuing medical work in a small community,” McGuire says. “I love being part of a small group of people with a common goal.”

In the future, Glassford and McGuire might return to participate in the rural residency program. Medical residents divide their time between assisting in a family practice and having specialists supervise them in various hospital sectors.

The recruitment committee’s other strategies include attending medical job fairs and providing tours to fully accredited doctors interested in relocating. The committee also lends its support to the ongoing struggle to recruit nurse practitioners. (“It’s just as hard to find nurses as doctors,” says Kindree.)

Recruitment for potential doctors begins even before students leave high school. Four times a year ten local grade-ten students, selected for their good marks and an interest in a health-care career, spend a day shadowing doctors and touring the hospital.

However, enticing doctors to the area is only half the battle; retention is equally challenging.

Doctors who practice in under-serviced areas may find high patient loads and demanding on-call duties lead to burnout. Further, their spouses may not be able to find suitable employment in a rural area. The Dufferin committee sometimes finds itself pursuing local career opportunities for doctors’ spouses as vigorously as it pursues doctors.

Climate, lack of recreational/cultural opportunities, limited educational choices and extracurricular opportunities for children, and distance from family and friends are also factors that cause doctors to favour urban centres.

One of the search committee’s early triumphs was to set the wheels in motion for the establishment of “turnkey” medical clinic; that is, a clinic that already has staff, equipment, even patients, ready to go. The committee identified that such a clinic would be attractive to doctors because it saved them their start-up costs. Says Kindree, “The search committee generated community interest for a new clinic and then, because we are not a fundraising committee, the hospital took over.”

The Highlands Health Clinic, completed in 2003, is now home to six family physicians in a group practice that will support ten. Eight specialists also have offices in the building. 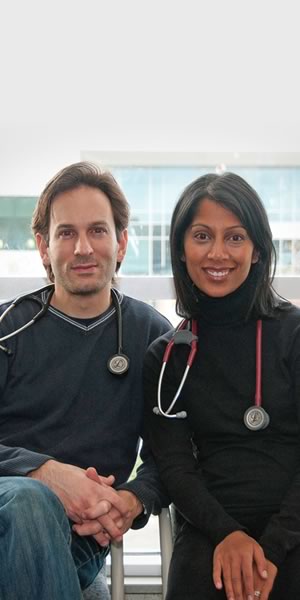 When you call the Highlands Health Network clinic in Orangeville to schedule an appointment with Dr. Milone, you never know who you’ll get.

Last September, husband and wife family practitioners, Dr. Stephen Milone and Dr. Stephanie Lopes Milone, became the newest recruits and took on 1,200 patients each in their part-time practice (both doctors also have positions at the hospital).

The couple had attended an area golf day for medical students, and returned for a two-month internship. Their reasons for settling here reflect those of other young doctors attracted to the area – proximity to extended family, a good work environment, and community and recreational amenities for children.

Another relatively recent arrival, Dr. Leisha Ostrowski, added affordable housing prices and proximity to the airport as important in her decision to locate here.

To sweeten the pot, physicians coming to the community qualify for the Ministry of Health’s under-serviced area program incentive of $15,000, a moving allowance of up to $3,000 for new graduates, and some tuition reimbursements.

The search committee has recruited eight family physicians over the past three years, five who previously participated as medical students and residents. Louise Kindree says that success was due to what is perhaps the most effective recruitment strategy of all – the help of current doctors.

About fifty family practitioners and other specialists, about two-thirds of the region’s doctors, have signed on as “preceptors,” mentoring and sharing their expertise with medical students.

“We have become a hospital of choice for rural community teaching,” Kindree says. “The day that we see one of our pre-med students sign on as a full-fledged doctor in the community we’ll know we’ve succeeded.”

Caledon has allocated $25,000 this year for the activities of its new recruitment committee. Dufferin County has dropped its budget for its committee to $20,000 from a high of $40,000 four years ago.

Dufferin/Caledon’s combined population of 110,000 is projected to grow to more than 130,000 by 2016. That 10-per-cent increase translates into an equal increase in the proportion of doctors that will be required to service the area.

Kindree estimates that within the next five years, the county’s growing population will require an additional twenty family practitioners. With those kinds of numbers looming, it will be a long time before the search committee can pack its bags and go home.

Need a doctor in Headwaters?

Patient forms are available at the inquiry desk at Headwaters Health Care Centre, clinics, doctors’ offices and on-line at www.headwatershealth.ca (click on “find a doctor”). Fill out the form and mail as directed. One form per family. Don’t wait until you require medical attention to apply. 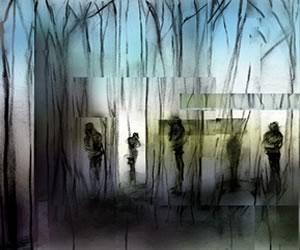 Mental illness is a lonely, often hidden disease – all the more so in Dufferin County where services are fractured and funding is, abysmally, the lowest in the province.