On March 1, 1821, Donald and Christian Cameron, with baby Agnes, arrived at their new lot in the woods of Caledon. Years later, sensing his end was near, Donald set down some memories of their first few years in the wilderness. It is a tale of hardship, heroism and endurance.

A simple line in Donald Cameron’s memoir, written thirty-seven years after that March day, captures the enormity of their first moments:

“We landed with all that belonged to us. Molloy [the ox cart driver] bid farewell and left us, and I began to clear away the snow where we were to lay our bed.”

Yet the same paragraph offers a glimpse of the spirit that kept pioneers like the Camerons going. “Since Providence has provided us a lot in the wilderness, my dear wife said, we can go on without a house or shed.”

Despite the courage expressed by Christian, shelter was a priority and within ten days the Camerons had built what Donald described as a “middling good” log cabin. Bark served for shingles and the floor was made of peeled basswood logs. Donald felt particularly blessed to have the bundle of hay they’d picked up on the way to Caledon. At least they had something to sleep on.

But by late spring the hay had become a mixed blessing; mice loved it and they in turn attracted snakes. Still the cabin was better than sleeping under the open sky, even though the roof leaked; and even though it had no door, which meant that along with the mice and snakes, other wildlife tended to wander in – not the wolves they could hear every night, but squirrels, raccoons and especially porcupines. The Camerons also had to fear the bears that still roamed the Caledon hills.

The lack of a cabin door was a problem, but it came second to the necessity of obtaining food. So, at the first thaw, Donald left his baby and newly pregnant wife to walk twenty-eight miles to Vaughan Township. Why? For potatoes, a pioneer staple. They could be planted almost anywhere the sun reached. They were hardy, unappealing to wildlife, productive, and stored well over winter.

Vaughan had some twenty-five years of settlement history by 1821, so seed potatoes were in good supply, and after a week’s absence Donald returned with a few bushels. He had been lucky to catch a ride from Vaughan almost as far as Bolton, but from there to his lot, several miles north of present-day Caledon East, he carried the potatoes through the bush on his back, all 200 pounds of them. 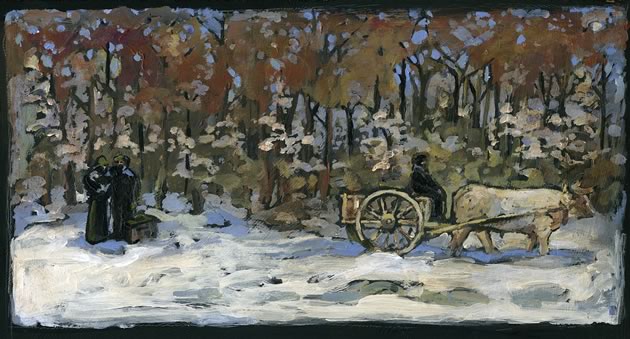 Donald set down some memories of their first few years in the wilderness. It is a tale of hardship, heroism and endurance. Illustration by Shelagh Armstrong.

No sooner had he left Christian with the potatoes to plant than Donald took off again from the doorless cabin, this time for Lake Erie to retrieve their only cow which they had left at Long Point months earlier.

The slog to Lake Erie, all on foot, was a 300-mile round trip – an adventure spiked on his return by a cloudburst that flooded the Humber River so that he had to force the cow to swim across while he held on to its tail. Christian must have been happy to welcome him home from his arduous trek, although his memoirs don’t record what she endured in her husband’s absence.

By autumn of 1821, it is likely the cabin finally had a door, for Donald never mentions it again. Instead, his account offers a slim snapshot of early pioneer life with winter coming on.

“We were very poor,” Donald says, “but not destitute.” He had sold the watch his father had given him when he left Scotland, so the family had a bit of cash for provisions. By late August they had lined up a barrel of flour, some salt pork, turnips, corn, and powder and shot for game. And potatoes, lots and lots of potatoes.

They also had the cow, although it did not necessarily guarantee a milk supply. In fact, Donald had tried to sell her in Long Point, but there were no takers among the other cash-strapped settlers.

Although he doesn’t mention other livestock, it’s probable the family had a few pigs as well. Pigs were a pioneer’s ready choice because they grew quickly, reproduced easily, foraged on their own in the bush, and were smart and tough enough to look after themselves – except from bears. (Feral pigs could also become dangerous, but that’s another story.)

As it turned out, the spring of 1822 found the Camerons intact, having warded off one of the worst of winter’s threats to the pioneers’ survival: starvation. But it must have been a gloomy, smoke-filled season, for their light and heat came from a fireplace that was little more than a pile of stones with no chimney. Nevertheless, as Donald says, “The Canadian forest was a grand school,” for that winter he figured out how to make shoes from scraps of leather. He must have learned a little midwifery, too, when Christian delivered baby Sarah.

For the Camerons, 1822 may have been the best year. The potato crop was huge. Donald grew some wheat (which he carried by foot to Vaughan for milling) and he even found work, earning enough to upgrade their stores with such things as sugar, needles, thread and cloth. In the fall, wild fruit and game were abundant, so they were secure for the winter. The following spring Donald bought two steers to train as a team. The investment in a team of oxen had the potential to reduce the work load at home and, rented out to the growing influx of newcomers, to generate income.

But, sadly, the Camerons’ fortunes plunged that year. One of the steers died and a newly purchased calf ran away and was killed. Then plans to improve the cabin were set aside because Christian, pregnant once again and worn down by the hardships of the bush, fell gravely ill. She became progressively weaker and, in August, she had a stillborn child and died shortly after. She was only thirty.

Donald now stood at the edge of an emotional and practical black hole all too familiar to the early pioneers. His memoir is sparse in this period, but he acknowledges that God alone knew his state of mind, which must have been bleak. Through the winter of 1823–24, Donald placed Agnes and Sarah with a neighbour three miles away. He stayed in the family cabin, but every morning and every evening he walked to the neighbour’s home to see his children and to pay for their keep by doing chores. With the two return trips he travelled twelve miles a day, sometimes through waist-deep snow. “It seemed impossible,” he records in his understated prose.

In March, with classic pioneer expediency, Donald abruptly proposed marriage to another neighbour, Elizabeth Armour, and she accepted.

Their life together was a fruitful and happy one, Donald records, but it was not to be in Caledon. Elizabeth was not content in the wilds and wanted to move to the more developed Vaughan. Weighed down by the experience of the previous three years, Donald was easy to persuade. That summer he sold his Caledon holding to the first bidder.

“It was a good change for us,” Donald comments, “and I may say from that time to this day, we have had plenty to eat and to drink and to spare.”

Nevertheless those early, difficult days in Caledon remained deeply rooted in Donald’s soul. After his death in August, 1858, his eldest son, Archibald Cameron (with Elizabeth), added this observation to the memoirs:

“Toward the close of his life, in memory he revisited the scenes of his early trials and lingered fondly on all the ways by which the Lord had led him.”

The Camerons left Scotland in June 1819, reaching Montreal in late August. At Lachine, Donald contracted what he called “lake fever” (malaria). After his long recuperation they travelled by ship through Kingston to Toronto en route to their original destination, the Talbot Settlement near St. Thomas. But at Toronto, Donald’s recurring fever halted their journey till the spring of 1820. Underway again, now on Lake Erie, their ship put in at Long Point and sank in the harbour. Here, Donald became sick again and missed another growing season. In late 1820, the Camerons abandoned their Talbot objective, returned to Toronto and, after wintering in Albion Township, finally reached their lot in Caledon Township in March, 1821, a journey of almost two full years.

Their Souls at Rest

Donald Cameron (b.1793) married Christian McLevin (b.1794) just days before they left Scotland for Canada. When Christian died, Donald buried her on their property, Lot 16, 6th Line East, Caledon Township (the northwest corner of Airport Road and Escarpment Sideroad). In 1855, he moved her remains to what was then called Mrs. McKinnon’s Burying Ground (the Old Stone Church on St. Andrew’s Road). Donald is buried with Elizabeth in Vaughan. A transcript of his memoirs is in the archives at Peel Heritage Complex.