All in the Family

Family businesses are at the heart of the Headwaters economy.

Family businesses are the heart and soul of small towns and rural economies. And here in the hills, family businesses span the spectrum, from large construction and transportation operations to smaller retail and manufacturing firms.

Some, like Mundell Lumber in Erin, have roots that go back several generations to the late 1800s, but the vast majority are in the hands of the founders who, as our population ages, are ready for a transition to the next generation. But, as Tom Deans points out in his book, Every Family’s Business, this is no easy process.

According to the Business Development Bank of Canada, about 30 per cent of Canadian family-owned businesses pass on successfully to the second generation. A meagre 10 per cent move to the third generation, and succession rates after that are below 5 per cent.

So how do businesses survive for generations? Why, when you walk down the main street of Erin, for example, do you find a collection of small businesses such as Steen’s Dairy, Holtom’s Bakery and Mundell Lumber, that are still thriving well after the founding generations have ceded control?

It helps if your business neighbours are also your friends. Dana Mundell, current owner of Mundell Lumber, recounts how, as a young boy, he used to cross the street to visit his friends at Steen’s Dairy, where, in the office at the back, he saw a poster with a quote by Abe Lincoln, “opportunity often comes disguised as hard work.”

He absorbed by osmosis the attitude of hard work from his friends, who are still his friends today: “We socialize together.” This social network of main-street entrepreneurs helps to nurture their businesses.

Being involved in a family business, even from an early age, is an opportunity to learn, to absorb information and to cultivate values. John Burnside of R.J. Burnside recalls helping out around the office from the time he was six years old.

“I had a job every Saturday morning vacuuming and cleaning toilets,” he says. “I got to eat donuts and hang out with my dad.” From that he learned “the unquestioned value of having personal integrity, honesty and a good reputation.”

At Omega Lift in Bolton, Greg Pannia, son of founder Antonio, started working part time in the stock room when he was fifteen. He then moved on to other departments as part of a deliberate plan overseen by his father to learn the business.

“As the responsibility grows you get to be involved in the bigger decisions of the business,” he says. “You start running things a little bit on your own. Hopefully, by the time he retires, if he retires, you can run things day to day without having any real shock factor.”

Supportive friends, helpful neighbours, a chance to learn on the job. Successful family businesses depend on these. But another important theme that emerges in conversations is the need for communication.

“When there’s a problem, deal with it right away,” says Brenda Holmes of All-Mont, whose father Wim Eichhorn established a garage-door business in Orangeville twenty-five years ago. “Don’t let it simmer and brew.”

It also helps if everyone has a job to do and knows what’s expected of them. Anthony Acchione of Orangeville’s Allto Construction says it’s important “to establish roles right away” so family members know who is responsible for what.

But regardless of how synchronized and smooth the day-to-day operations of a family business may be, there remains the challenge of how to orchestrate a successful transition to the next generation.

George Ledson of Cavalier Transportation Services in Bolton has been working carefully on a succession plan, but he admits that sometimes he wishes the problem would “take care of itself after he’s gone.”

On this and the following pages are profiles of just some of the family businesses that make their headquarters in the hills. 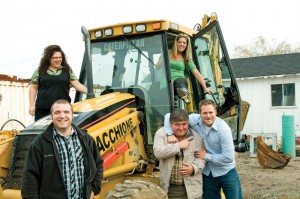 Allto Construction and its sister company, Acchione Excavating, was founded in 1969 by Larry Acchione. There are four children involved in the business. Lisa Thompson is CEO. Angela Segreto does administrative work. Anthony Acchione is vice president and oversees operations and the youngest, Chris, is a construction supervisor.

Anthony Acchione has been involved in the business for ten years and says everything he knows about the job, especially how to estimate job costs, he learned directly from his father. “You don’t learn this in school,” he says. “It was all hands-on, on site.” He says the key to making things run smoothly among family members is that “we each have jobs to do – and we do them.”

When the time comes for his three boys (twins, 7, and a 3-year old), Anthony says, “If they don’t want to go into the business, I’m not going to push them.” The key, he says, is “you have to love the business.” 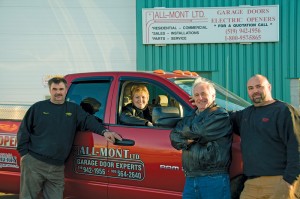 All-Mont Ltd. is a dealership that specializes in residential and commercial garage doors, primarily Garaga and Amarr, as well as electric openers and loading dock equipment. Founded by Dutch immigrants Wim and Grace Eichhorn in 1983, All-Mont is now moving to the second generation as offspring Frank, 43, Brenda Holmes, 39, and Marco, 35, are actively involved in the business. (Another son and daughter were involved but have moved on to other things.)

On a day-to-day basis, Brenda Holmes says, the family has been lucky. “There have been no major issues. We all know our place and what each other does.” While she runs the office and does the ordering and scheduling, her brother Frank does sales and installations and her other brother Marco focusses on installations. As for the third generation, one of her nephews is working there, but it’s not clear if he wants to be involved permanently.

Holmes says that her father is slowly retiring from the business and, coincidentally, the family is now in the process of discussing – with the help of an accountant – the details of the transition to the next generation. 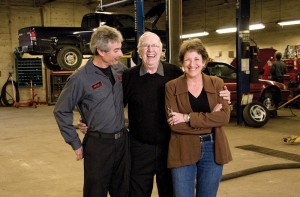 In 1963 Bob Erskine and his partner, Doug Hazelton, founded a gas station and car repair shop in Orangeville. Over the years it has borne the names of Gulf, Fina and Petro-Canada. Bob’s son Mark apprenticed there as a technician and eventually took over the business, though he shut down the gas part of the business.

Now 50, Mark Erskine says the most important thing he learned from his father was service. “Service was my dad’s number one,” he says. “We strive to keep up the good name that was established forty-five years before.”

Mark’s wife Terri helps out with the business one day a week, while his father, 78, continues to be involved as a shuttle driver. 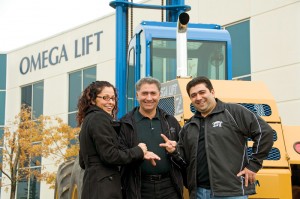 Omega Lift manufactures rough-terrain forklifts in Bolton. It has contracts to supply forklifts to the Canadian and American military, as well as other government militaries around the world.

The company was founded by Antonio Pannia, 57. His daughter Cathy, 30, is controller; his son Greg, 35, is operations manager.

“When we’re here, it’s business, and when we’re at the dinner table, it’s family,” Greg says. “You have to give your honest and open opinion when it comes to business. That way whoever is making the decision on a particular issue has your business input. If you put feelings into it, it’s going to get a little crazy.”

Greg has been involved in the family business for about fourteen years. He has learned that “not only do you have to have a thick skin, but your responsibility doesn’t stop with the job description.” Family members, he says, tend to rely more heavily on one another than they would on regular employees.

As for the next generation, Greg’s oldest daughter is only four, but if someday she expresses an interest in joining the company, his advice would be first to get an education and then to “think hard about it. Once you make a decision to work with family you have to follow through with it.” 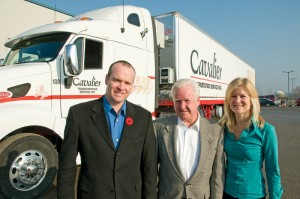 From left : Brian and George Ledson and Vicki Stafford. Photo by Pete Paterson.

George P. Ledson started in the trucking business over fifty years ago. In 1979, with twenty-two years’ experience working for others, he founded his own firm in Bolton. Now, at age 70, Ledson oversees a North America-wide business that operates almost 200 tractor-trailers.

Ledson says that, while his children have a real interest in the business, succession planning is not easy. In fact, it’s a process that the company has had underway for at least a couple of years, involving meetings with lawyers and accountants. There are issues of tax planning, insurance, allotting shares and other complexities that make it an “ongoing process.” 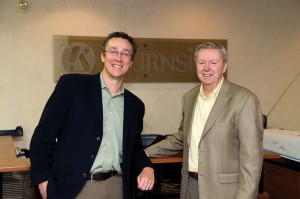 From left : John and Bob Burnside. Photo by Pete Paterson.

In 2006, John Burnside moved back to Orangeville from Chicago to head up R.J. Burnside, the firm his father, Bob, had founded thirty-eight years earlier. John had worked previously at the firm for eight years as an engineer. With two master’s degrees and experience as a management consultant, he brings a broad perspective to the firm.

The engineering consulting company specializes in hydrogeology, water and solid-waste management, transportation and building engineering, environmental assessments, as well as other areas.

For a member of a younger generation taking over a family firm, John acknowledges, it can be a challenge to establish credibility. Although, he adds, “I have the advantage of being trained and having worked here as an engineer, so I understand the business, and people here remember me and the fact I’ve done most of the roles.”

John says the transition for him has been smooth. His advice to others is to start the succession-planning process early.

About the Author More by Tony Maxwell

Tony Maxwell is a freelance writer who lives in Mono. 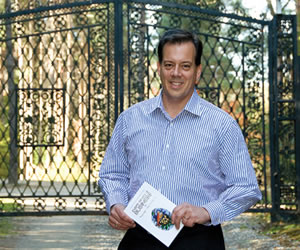 Passing on the family business can be fraught with emotion and strife. It doesn’t have to be, says Tom Deans.