Two self-taught Caledon gardeners have created a kind of boutique garden centre, where the emphasis is on natural, organic, drought-hardy – and gorgeous.

During those long winter months when the rolling contours of my property were reduced to a dreary white slate, I took comfort knowing that somewhere beneath that blanket of snow a Very Crazy Daisy patiently awaited the spring.

“Crazy Daisies are frilled,” Lorraine Roberts, co-owner of Plant Paradise Country Gardens, explained after I snatched up one of the last remaining pots last fall, “but my Very Crazy Daisy petals curl up as well as being frilled.” Lorraine grows many of her perennials from seed and some of the Crazy Daisy seeds produced this unique freak variety, which she now propagates separately. 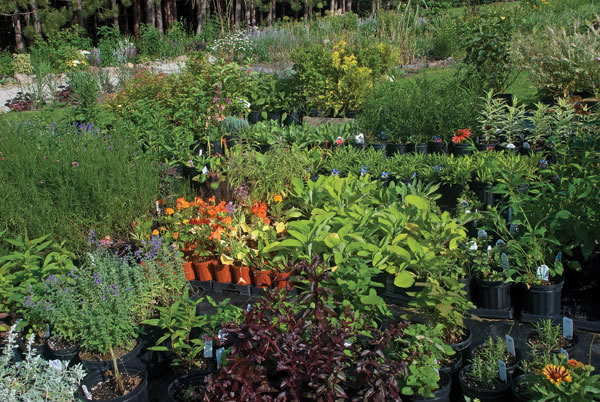 The Roberts place the extra potted plants in the growing fields on black groundcover mats. In the foreground are the burgundy leaves of Sedum “Purple Emperor,” and to the left is Nepeta “Walker’s Low.” Annual nasturtiums (a protector plant) are blooming just left of centre and the tall bloom to the right is Echinacea “Twilight.” Photo by Rosemary Hasner | Black Dog Creative Arts.

On the grounds, the expansive display gardens include a perennial border, a wildflower meadow, a shade garden, a pond garden and a cutting garden – all so enchanting that the name “Plant Paradise” arose naturally from visitors’ repeated comments that the gardens were just that.

Customers are handed paper and a pen on arrival and encouraged to wander the gardens, jotting down the names of plants that interest them. Robb or Lorraine usually accompany them, answering questions and pointing out reliable favourites, such as ‘Bonfire’ and ‘Fireglow’ euphorbia, heucheras, echinacea hybrids, alliums, sedums, day lilies, and even a thriving patch of prickly pear cactus (Opuntia macrohiza).

Their stately delphinium collection (mostly Delphinium elatum, hardy to zone 3) is so spectacular and popular that Plant Paradise hosts an annual Delphinium Day. On busy days customers are content to stroll around until the Roberts are available.

“We don’t want to get to the point where we need a large staff that may not be able to answer questions,” Lorraine says. They have one part-time employee who helps mix potting soil, but Lorraine examines and pots every plant herself.

It’s hard to believe that in 1999 when the Roberts moved from Toronto to the 24-acre property there was not a flowerbed in sight. The self-employed musicians – Robb a guitarist and Lorraine a flutist – loved the outdoors and their first project was to develop a trail system through the seven acres of managed hardwood forest that backs on to Centreville Creek at the bottom of the property.

“We always grew vegetables, but when we moved to this large property we decided to create perennial beds and Lorraine bought plants from nurseries,” Robb says. The plants did not thrive and a frustrated Lorraine speculated that the plants, started in artificial, chemically-fortified conditions, couldn’t take the shock of the real world. So, she began to grow her own perennials from seed, with no chemical stimulants.

For the first couple of years, during the winter months, she nurtured approximately 1,200 seeds in their basement, hauling them outside each day to receive natural sunlight. When the plants were large enough they were moved outside to begin toughening up in covered cold frames. Eventually they were transplanted to the beds, where the Roberts had enriched the clay soil with compost, some forty tons of it.

The passion for gardening consumed more and more of their time and, in 2005, assessing the direction of their musical careers, the Roberts decided that, rather than take to the road on tour, they would stay in Caledon and consider a new venture. 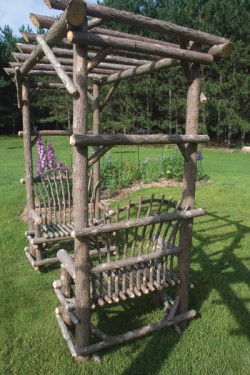 Plant Paradise also sells a line of rustic furniture, some that Robb creates during the winter with wood from the property. Photo by Rosemary Hasner | Black Dog Creative Arts.

Robb hammered tables together and set them up in the driveway to sell overflow plants from the nursery beds. A few signs and local newspaper advertisements drew hordes of people for the May weekend sale. The decision was made.

The couple began working in earnest, erecting a greenhouse, increasing seed production and starting bare-root plantings. Die-hard organic gardeners, they continued to steer clear of chemical aids that cause plants to grow quickly at first, but often prove a disappointment in the long run.

“Synthetic fertilizers are like swear words to us,” Lorraine states emphatically. But that doesn’t mean her plants don’t eat well. Lorraine believes that if a plant receives the nutrients to build healthy roots, it will be a stress-free plant. The trick is all in the soil, amply enriched with compost or composted manure. For vegetable gardens she recommends compost or worm castings (which she sources from Bolton-based VermiGrow).

Maintaining healthy soil is one component of the “xeriscape gardening” the Roberts’ practise. Xeriscaping involves choosing plants appropriate to their site and creating a landscape that can be maintained with little or no supplemental watering. Lorraine says that once her plants are established, she never waters them – even in the driest summers – because they are strong enough to fend for themselves. By way of confirmation, their deep perennial borders are a profusion of lush, continuous bloom.

Although she has no formal horticultural training, complex botanical names trip easily from Lorraine’s tongue. “I went to the UofL – the University of Life,” she says with a smile. “I intimately know the plants because I’ve grown them from seed. I’ve read the books, I know the statistics, the hybrids, et cetera, so it makes sense, it’s not just memorizing names.”

The Roberts admit, though, that it has been a steep learning curve over the years. Take for example the first time they spread corn gluten on their perennial beds to control weed seeds. (Corn gluten prevents seeds from germinating – so use it only where you are not encouraging plants to seed themselves.) “We learned the hard way that corn gluten should be watered in immediately,” Robb says. The day after it was applied a flock of wild turkeys descended on the beds, pecking away at the corn gluten – and the plants. (Cats and wild animals also like corn gluten.)

“Protector” plants are another of Lorraine’s garden essentials. “Bad”  bugs – conspicuous by their absence at Plant Paradise – are repelled naturally by dill and garlic. At the same time, other plants attract the beneficial insects that feed on predators. The plants that attract “good” bugs include feverfew, Shasta daisies, alliums, alyssum and even dandelions.

“If you intersperse your garden with protector plants you will have fewer problems,” Lorraine says. “A diversity of plants creates an eco-habitat that brings balance and harmony to your environment which makes it very easy to grow organically.”

Plant Paradise opens around the middle of April, as soon as the ground is workable. The hardy perennials come directly out of winter beds – not from warm greenhouses – and can be planted immediately. Lorraine admits, with frustration, that some customers are sceptical about planting before the May long weekend – the traditional frost-free date to start planting. 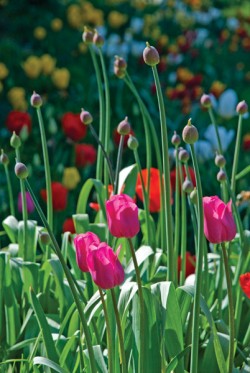 Spring is also the time to witness the breathtaking tulip display at Plant Paradise. Starting with 1,200 bulbs along the roadside in 2000, they now have some 4,500 tulips in the display gardens, offering a continuous show of bloom from late April to Mother’s Day.

As for the future, the Roberts are focussed on how to best service customers while staying attuned to environmental concerns. The lights and cash register in the check-out pavilion already run on solar power. And Robb has been working to develop solar-powered water features, as well as a system to collect the hundreds of gallons of rainwater that annually pours over roof surfaces.

“Our technology is twenty to thirty years behind other countries,” he says, “because we’ve been spoiled with electricity and lots of water, but with increasing costs we have to change. Now is a good time to start.”

The Roberts were also recent recipients of the Canadian Wildlife Federation’s Backyard Habitat Certificate for outstanding effort in helping wildlife through the creation of habitat and wildlife gardens. Among their various initiatives are a wood duck box in their pond and two screech owl boxes on the woodland trail.

The word is out that Lorraine is the go-to person for organic perennial gardening. She will speak at Canada Blooms this month and is offering a series of free seminars at Plant Paradise this spring. For details, visit www.plantparadise.ca.

Lorraine hasn’t picked up her flute in years, but she says she doesn’t miss it. The garden has given her a new form of expression: “I’m a plantaholic. It’s a work of art to see the beauty of nature unfolding in a flower. It’s intoxicating. The joy of gardening lies in its unpredictable and evolving nature – day to day and year to year. A day lily lasts only one day, but it is beautiful and you need to stop and enjoy it while it’s there.”