Ken Jewett: The Old Man and the Tree

Ken Jewett: One of our 2009 Local Heroes

The maple leaf may be synonymous with all things Canadian, but actually finding a true native maple to plant can be a daunting challenge. Ken Jewett, founder of Maple Leaves Forever, is out to change that. 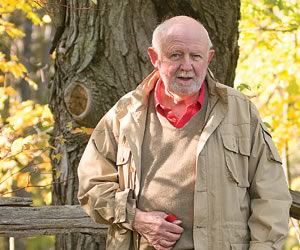 Ken Jewett: The Old Man and the Tree

Ken was given his father’s hobby farm at age twenty-one, and it was there that his passion for planting trees began. (Ironically, he was working in sales for Abitibi paper at the time.) At age forty he started Marsan Foods, a manufacturer of frozen prepared meals. The company blossomed, and has been featured as one of the fifty best-managed family businesses in Canada.

It was after he retired that Ken returned to his interest in maple trees. “The original motivation for Maple Leaves Forever,” he says, “was an Ontario government program in the 1800s that subsidized farmers for taking maples and other hardwoods from their woodlots and planting them along the roadsides.” The program resulted in the tree-lined roadways so common to the landscape of these hills.

But those trees are starting to disappear. Maples can live for up to 400 years, but pollution, salt and construction take a toll on roadside trees. As well, Ken explains that some experts feel the tree’s natural preference is to grow in a crowded, shady forest – and their longevity is reduced when they are strung out in a line. Regardless of the cause, Ken says, “Here we are in the early 2000s, and all those maples from the 1800s are starting to die.” Most are not being replaced.

A true Canadian maple is one of ten species native to different parts of the country, such as big leaf maples in British Columbia, sugar maples in Ontario, and red maples in Quebec. Instead of these, garden centres typically sell a variety of cultivars and hybrids, or trees of unknown genetic origin, shipped in from the United States where warmer temperatures make them cheaper to produce.

At Maple Leaves Forever, a registered national charity, Ken and his two staff work with seed collectors and nurseries to provide a certified supply of “seed zone identified” native seed, mostly for sugar, red and silver maples. Trees planted in the same climatic zone as their parent trees are thought to be hardier.

The organization also acquires native seedlings, saplings and calipre stock from its network of certified nurseries. It then makes the trees available to landowners, municipalities, conservation authorities and community groups for half the nursery selling price, with Maple Leaves Forever funding the balance of the cost.

In 2008, 8,500 maples were planted through the program. Restoration on rural roadsides, laneways and hedgerows in southern Ontario has been the major focus so far, though Ken says that one day he would like to see the operation extend across the country.

“You’ve got to have a dream,” says this champion of our arboreal identity. “It doesn’t have to be in business, or making money, but it needs to be something where, in order to get there, you’ve got to be committed.