Before there were boards and commissions and tribunals and official plans, and before there were consultants and mission statements and surveys and regulations and codes, the local municipal council handled almost everything. And fast.

Deputy-Reeve Crawford was in a spot of trouble at the June, 1883 meeting of the Albion Township council in Lockton. In late May, a sudden flood on the Albion-King Town Line had torn out the bridge over a creek. The situation, in Crawford’s opinion, created a clear and present danger, so he had ordered a new bridge built.

In head-spinning time by today’s standards, a contractor was hired, support beams laid and planks nailed down. In just two days, the danger was eliminated and normal traffic restored. It was a speedy and practical response to an urgent need, but there was a political flaw. Deputy-Reeve Crawford had acted on his own.

“It needed doing and I did it!”

On the books in Albion Township was a requirement that no member of council could authorize expenditures over ten dollars without first consulting other councillors. “Crawford’s Bridge,” as his critics called it, had cost nearly seventy dollars.

Exactly what was said at the June council meeting will never be known. If mud was tossed, clerk James Donaghy did not record it. Still, there are hints. A bill for five dollars from William Clark was summarily rejected and Councillor Brown was appointed to inspect the bridge before any other bills were approved.

Evidence of heat comes too from letters to the editor arguing that by acting outside the ten-dollar limit Crawford was personally responsible for the difference. The deputy-reeve’s reply was that it was more urgent to deal rapidly with the washed out bridge than to travel around the township looking for consensus among other councillors.

“It needed doing and I did it,” he is alleged to have said. Judging by the tone of subsequent letters to the editor, his argument prevailed, not just with council but with the citizens of Albion too. Action, it seems, was preferred over consultation.

No End to the Responsibilities

Despite the common contemporary feeling that government had little involvement in people’s daily lives during the nineteenth century, the fact is, here in the hills and elsewhere, citizens relied heavily on their local councils.

Predictably, much of that reliance related to infrastructure. After Albion’s council dealt with the deputy-reeve’s transgression at the June meeting, it went on to authorize improvements to five different roads, repairs to three bridges and construction of a new one. At the July meeting (held at Perdue’s Hotel in Caledon East), council voted to repair seven more bridges and, with an apparent change of heart, reversed itself on William Clark’s five-dollar account for the work on Crawford’s Bridge. 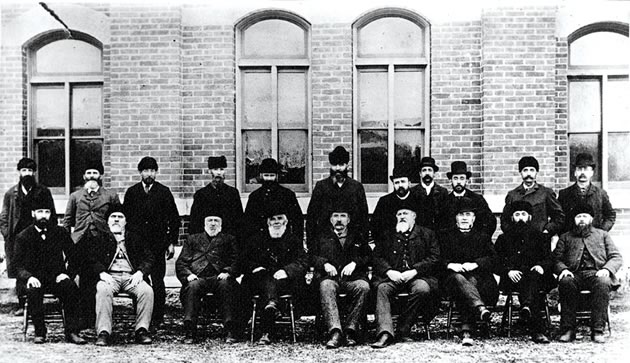 Dour men in beards: At its November session in 1888, Dufferin County council adjourned briefly to gather outside the court house to be photographed. It was the first time since the new county’s council was established in 1881 that anyone had thought to capture the “County Fathers” on film. Of that first council, the Orangeville Sun enthused, “They are, perhaps, the ablest-bodied Council in Ontario. There are 13 members, and their united weight is 2,704 lbs, or an average of 208 lbs each! The Deputy-Reeve of Melancthon takes the lead, he weighing 268 pounds… Verily, the race of giants is not passed away.” Photo courtesy of Dufferin County Museum and Archives.

In the June and July meetings of every other council around these hills, the minutes suggest precisely the same thing was going on: fixing, building and getting things done.

It was not all roads and bridges, however. Promotion of commerce also came under local government’s vast umbrella.

In the summer of 1883, for example, Reeve Henderson of East Garafraxa organized yet another (unsuccessful) petition to the Credit Valley Railway for a station on its line through the township. In Erin Township, Reeve Burt (who had two deputy-reeves) worked to get more council support for local fairs. In Melancthon, after seven years without a single store in the entire township, council got its wish and celebrated the opening of a general store in Melancthon Corners.

But commerce also had a downside for municipal politicians. For example, at its May, 1883 meeting, Caledon Township council, received delegations from Alton and Caledon East pleading for the removal of community slaughterhouses to sites where the offensive smells would be less invasive. Both enterprises were run by influential employers, but by the end of the meeting council had appointed two of its members to become health officers pro tem, empowered not to consult but to “have the same removed.”

Occasionally, councillors had to respond to unusual, even bizarre situations – such as the one that confronted Colwell Graham in 1883. Then in his fourteenth year as reeve, and having been treasurer for eight years and a councillor for nine, he thought he’d heard it all, until a local citizen told him that otherworldly creatures were haunting a culvert on 15 Sideroad and council had better do something. (It turned out to be a still.) Less edgy but still unusual was Albion council’s order to S. Beamish to remove his furniture from the middle of the intersection of the Fourth Line and 35 Sideroad.

More common, but indicative of the all-encompassing role of municipal politicians, was the number of disbursements at council meetings on behalf of “indigents,” what today would be similar to social assistance payments. Caledon Township’s elected body made eight such payments in May, 1883, including one “to Mrs. Brown, $5 for care of a foundling,” a baby abandoned in a woodshed near Mono Road. A strange matter for a municipal council, but there was no other official body to take charge.

Being a Councillor: Worth All the Work?

For the most part, the people who undertook council responsibilities – and made the effort to get elected – were citizens with a keen appreciation of the benefits that come with local control. Prior to the incorporation of Orangeville in 1863, for example, the municipal power of the town’s 1,200 citizens was fragmented across three townships, Mono, Caledon and Garafraxa, and three counties, Wellington, Grey and Simcoe. Getting its own local government meant Orangeville could do things on its own and for itself.

In urban settlements like Orangeville, local politicians were often businessmen who realized local control was crucial because rural township councils tended to govern instinctively in favour of a rural lifestyle, a point which may explain why Bolton’s first council made no effort to hide its relief at the village’s separation from Albion Township in 1872 (yet Shelburne, whose boundaries sit astride Melancthon and Amaranth Townships did not incorporate as a town until 1977).

Certainly it was not the level of remuneration that encouraged citizens to run for council in the nineteenth century. One dollar per meeting was a typical compensation, although ad hoc appointments to such positions as health officer, fence inspector, and various committees could sweeten the pot a little.

Perhaps the strongest indication of the inherent rewards of municipal work is the number of reeves who returned repeatedly to serve their constituencies. Examples abound: Thomas Swinarton, twelve terms for Albion Township; Colwell Graham, fourteen in Mulmur: John Gillespie, eleven in Amaranth, to name just three.

Numbers like these suggest the rewards of serving on council must have been worth all the work. Deputy-Reeve Crawford would surely say so. Not long after the quick construction of “his” bridge, news wires carried the story of an American family who met disaster at a bridge washout. They were travelling in the dark and the bridge where they fell had gone unrepaired for weeks.

Also in the Minutes…

Almost hidden in the flurry of disbursements during Albion council’s minutes for June, 1883 is approval to pay the account of Dr. Allison of Caledon East. The bill was $16 for his medical care of A. Jamison, an “indigent.”

There are no details but the amount is significant and suggests that the highly regarded physician put in a great deal of time and effort not to mention expertise on the case.

Sadly, further along in the minutes another account is approved for payment, this time to Henry Brown: $7.50 to build a coffin for A Jamison.

No Detail Too Small

In Amaranth Township, by-law 33 was very specific on the issue.

It permitted free roaming of “cows, heifers, steers and oxen that are not breachy [prone to break fences], pigs over forty pounds except boars, and all sheep except rams.”

Owners of roaming livestock not covered by the list were subject to fines of fifty cents for the first offence, one dollar for the second, then two dollars, “and so on for each and every subsequent offence with costs.”

The by-law was enacted in 1861 and stood for decades except for an amendment passed in 1882.

As of May 7 that year, a roaming pig had to be “rung” (have a ring in its nose to keep it from rooting).