Eat Your Heart Out, Dr. Seuss!

Alpacas like llamas, prudently dole out kisses. After a quick assessment, they’ll smooch you right on the lips. 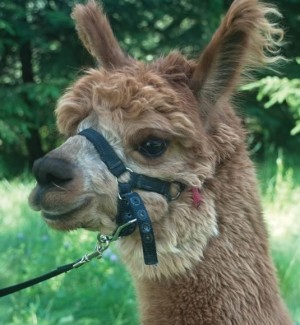 Patience, Limerick and Anabella nimbly crowd in and give us a sniff. A stud named Larceny, with a Billy Idol haircut, watches eagerly from his stall. These are the ’paca girls and ’paca boy, a small alpaca herd that Mulmur’s Kai-Liis McInnes dotes on. And it’s easy to see why. With their long necks, topknots and luxuriantly lashed eyes, they exude a goofy charm that makes entering the barn feel like walking into the pages of a Dr. Seuss picture book. Outdoors, it’s all exuberant foolery under the morning sun as they flirt, roll in the mud and, in a word that might have been coined by the good Dr. S. himself, “pronk” (hop straight up and down).

For Kai-Liis, it all began rather abruptly in pottery class several years back. She recalls working intently on a bowl while discussing a local farm dispersal with another student. She casually mentioned she wouldn’t mind owning a llama. Several days later came a phone call, “The llamas are on their way!”

Hesitant at first, Kai-Liis soon acquiesced, “Oh why not!” Suddenly she found herself rushing about the barn at Heed Farm and hastily blocking in a stall with an old clothes dryer to create makeshift accommodations for geldings White Cloud and Everest.

Unfortunately, White Cloud did not live long and Everest, so named for his love of high ground, became lonely. He was sulky, standoffish and not remotely interested in the farm’s Icelandic horses and donkey. Kai-Liis reasoned he might appreciate a chum closer to his own kind. And so she acquired alpacas, two pregnant females and a male. She swears she saw Everest smile the day his new paddock mates arrived. He loved them.

The herd soon expanded. Although alpacas are known as easy keepers, Kai-Liis could barely believe it when the first alpaca gave birth successfully. A call came while she was out teaching an evening seminar. “You’ve got a baby,” announced her daughter Sara. Racing back, Kai-Liis arrived at the paddock gate to find Everest and his three alpaca friends standing quietly in a circle, looking down. There, in the moonlight, was the baby – in alpaca-speak, a “cria.”

Every year there are one or two more alpacas as Kai-Liis carefully grows the group. And every year, as the season warms up, Kai-Liis hosts a shearing party. Raised for their fleece, Heed Farm’s alpacas yield up gorgeous textiles in black and white and a variety of earthy tones. Along with an experienced shearer, friends and fellow alpaca owners convene for the day-long exercise, holding and soothing the animals as the shearer does his job, then skirting (removing dirty wool) and sorting, bagging and labelling the fleece, ready to ship to the processor. 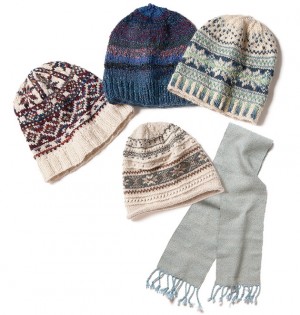 Kai-Liis McInnes creates knitted hats and scarves of her own design, inspired by Scottish and Scandinavian patterns, using pure alpaca fibre she hand-spins, often blending it with other fine wools. Photo by Pete Patterson

Fleece sent out raw to the processor, Shears For You near Palmerston, comes back graded and cleaned, some as skeins of yarn, but most of it as “roving,” bundled fibre for use as felting or stuffing, with the best of it ready for hand spinning. On one of her several looms Kai-Liis works up scarves and other pieces. She also knits a variety of hats, sometimes blending in merino or other wool, using her own designs which are largely based on the Fair Isle patterns of her Scottish heritage and Scandinavian motifs.

As well as a fibre artist, Kai-Liis is a prolific painter, frequently inspired by her animals, nature and her extensive travels. During a recent trip to Mongolia she rode yaks, Mongolian horses and a camel. It was the last that made her realize just how closely her alpacas – with their jaunty wool topknots, straight ahead gaze, softly pursed lips and upturned smiling muzzles – resemble the other members of their wider “camelid” family.

Although alpacas are mountain creatures and used to harsh conditions, the herd at Heed Farm has barn access during the day and spend the nights in their stalls. They generally hide from wind and humidity and Kai-Liis likes to keep the youngsters far from the coyote packs she often hears howling after dark, as well as the cougar rumoured to be roaming the area.

Smaller than llamas, alpacas aren’t as defensive of their territory. And Kai-Liis says they only spit at each other, not at people. In a fit of pique or a tussle over food, they raise their tails and point their noses in the air to indicate displeasure. On the other hand, like llamas, they prudently dole out kisses. After a quick assessment, they’ll smooch you right on the lips. 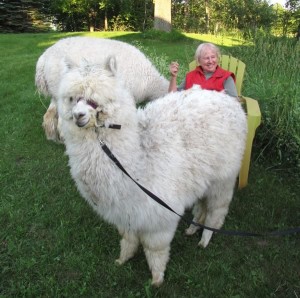 When Everest first met a neighbour’s child, a young girl originally from Peru, he gave a big smile. The little visitor marched right up to him and announced, “I’m Inca.” He responded by reaching down and giving her a great big kiss. And then he did it again.

Heed Farm is the namesake and legacy of Kai-Liis’s aunt Helmie and uncle Edmund, a Pulitzer Prize-winning cartoonist who emigrated from his native Estonia to Connecticut.

“Larceny has the same inquisitive look as Uncle Edmund,” says Kai-Liis. If Edmund could see Kai-Liis today, in her rustic country house, original art in every nook and cranny, an enormous stuffed bear collection looking out from every surface, and out in the barn, horses, a donkey, several cats, two dogs, and a herd of pronking, cartoon-like alpacas, he would be well amused.

Kai-Liis McInnes creates knitted hats and scarves of her own design, inspired by Scottish and Scandinavian patterns, using pure alpaca fibre she hand-spins, often blending it with other fine wools. Photo by Pete Paterson

A Finer Fibre – An Easy Keeper

In the milling world, alpaca fibre is considered a luxury product, standing well on its own for a variety of applications, but also blending beautifully with other fibres. It is creamy soft and durable, grading out several ways to produce a pashmina-like textile at the high end, to cozy batting and felt. Hypo-allergenic and lanolin-free, it is lighter and less irritating than sheep’s wool, but warmer, breathable and water repellent.

Descended from the vicuña, a wild camelid once hunted to near extinction, alpacas come in two varieties: the dreadlocked Suri, whose lustrous fleece hangs down elegantly like a Komodor dog’s, and the more common fluffy Huacaya (wa-ky-ah). Ninety percent of the world’s alpacas are Huacaya. Their gently kinked fleece grows perpendicular to their bodies, producing a finger-in-the-light-socket effect.

A native of the high Andes, wild alpacas are adapted to extreme weather and marginal land. However, it is recommended that domestic alpacas have safe fencing to keep them in and predators out, optional shelter from heat, wind and humidity, and a minimum of an eighth of an acre per animal. They graze about two pounds of forage a day and require about 20 per cent more in quality feed and mineral supplements.

Their reputation as “easy keepers” comes in part because they are light on the land and make a communal manure pile, their “rabbit-pellet,” nitrogen-rich waste making excellent compost. Stoic and, according to Alpaca Canada, more disease-resistant than other livestock, alpacas do require occasional worming, farrier work and annual vaccinations.

There are only about 20,000 alpacas in all of Canada, a population adequate for farm-gate craft sales, but not for a commercial fibre supply. Alpaca Ontario is hoping to change that through owner education related to both husbandry and business management, as well as by increasing consumer awareness.

On the business side, producers get to the point of shearing, but grade and sort off site, sending revenue out the door. And there is no standard-ized pricing for fleece, with rates fluctuating from $10 to $45 dollars per pound.

Animal pricing also varies widely, though that’s not surprising perhaps, given that Canada’s original breeding stock was chosen during a helicopter “fly-over” of a herd in Chile. Alpaca Ontario now requires that show animals be approved through the Canadian Llama and Alpaca Association registry, which verifies with DNA testing.

Another concern is the lack of veterinarians familiar with camelid care, so Alpaca Ontario is working with professional veterinarian associations in the province to develop educational programs.

Alpaca Ontario is also encouraging farmers to develop a “fleece first” attitude; that is, to actively breed animals for the quality of their fleece. It is hoped that thoughtful breeding can also improve the length of time that animals will continue to produce high-quality fibre. Alpacas can live about 25 years, but produce their best fibre in the first five.

“The Incas had much of this figured out 3,000 years ago,” says Melody Macdonald, Alpaca Ontario’s treasurer. “We’re catching up.”

The organization’s annual spring show in Orangeville has been helping to make that happen. This year, judged categories included ten colour classes for both the Suri and Huacaya breeds. Out of some 150 Alpaca Ontario members, 92 farms were represented at the show and an estimated 4,500 visitors came through the doors on its busiest day, making it the largest show in Canada for the third year running.

See alpacaontario.ca for events through to the Royal Winter Fair.

COMMON THREADS FIBRE SHOW & SALE In conjunction with the Textiles and Stitches Across Time exhibits running this summer at Dufferin County Museum & Archives, Heed Farm is hosting the Common Threads Fibre Show and Sale, a chance to meet the alpacas and take in some arts and crafts. Kai-Liis McInnes, Mardi Steiner and Lyla Stockdale will demonstrate heritage crafts of spinning, felting and knitting. The show takes place Saturday, June 25 and Sunday, June 26, from 11 am to 5 pm, at Heed Farm, 836100 4th Line Mulmur, 1 km north of Hwy. 89. See kai-liis.com for details.