Show Us the Money!

There were new markets, an expansion in available goods, new opportunities and, above all, a new lifestyle: people here had become connected to the outside world.

By 1873 the Toronto, Grey & Bruce Railway had laid track from Toronto to Owen Sound on a route through these hills that was shaped as much by financial squabbling as it was by engineering challenges.

When the Toronto, Grey & Bruce was granted its charter by the new Province of Ontario in March, 1868, the main idea was to get a rail line from Toronto (actually, Weston) to Owen Sound. It also planned a branch line from a mid-point such as Mono Mills or Orangeville over to Lake Huron. Not only would the TG&B connect important lake ports to Canada’s developing rail network, it would also open up a swath of the province that had been comparatively isolated.

For the people of these hills, rail access would be life-altering. For merchants, a rail line – more important, a local station – would mean a whole new level of inventory expansion and control. For industry there would be expanded markets. And to farmers a rail line would be night become day.

Using horse and wagon to transport bulk commodities such as wheat for more than 12 miles was simply not economical. So farmers in, say, Albion Township, always had a cash-flow problem. If one had a bumper crop, all his neighbours did too, resulting in far too much wheat for the mills in Bolton or Caledon East to handle. But with reasonable access to a railroad, their world would change.

So it’s not surprising that news of a railway stirred excitement in these hills in the late 1860s. But sober reflection played a role too. To buy land for a route and to build lines and infrastructure, the TG&B needed money. And to get through, over or around the escarpment, there were engineering decisions to make.

How to Get to Orangeville?

As it turned out, the engineering issues were solved fairly quickly. Building the first leg from Weston to Bolton on relatively flat land was easy, and between Orangeville and Owen Sound the topography did not offer a huge challenge. However, the Bolton-Orangeville section, with the Humber River to the east, the Credit to the west, and Caledon Mountain in between, was a potential engineering nightmare. But it was money that decided the route. 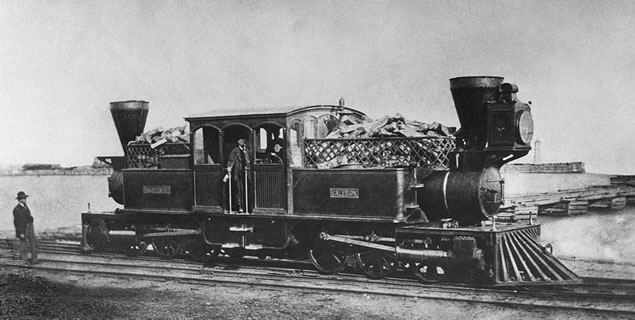 The double-headed ‘Caledon’ was built in England in 1871 for the TG&B and was the first of its type in Canada. Although it attracted a lot of attention for obvious reasons, it turned out to be too underpowered to meet its main purpose: climbing Caledon Mountain. The articulated design gave it added maneuverability – and a bad habit of jumping off the tracks. Photo Courtesy Dufferin County Museum and Archives P-2574

The easiest way would have been to avoid the mountain (and Caledon Township) by running east of the escarpment to Mono Mills and on to Orangeville. But this obvious choice had sent the price of land skyrocketing along that route. And that, combined with a mighty howl from Caledon Township, caused the planners to reconsider.

In the early planning stages of the TG&B, Caledon had committed major funds to ensure the rails would go through that township. It had also encouraged pricing restraint among landowners. With those incentives, the company did indeed chose the westerly route from Bolton, effectively shutting down forever Mono Mills’ hope of overcoming Orangeville as the northern gateway. (The decision would also lead to the construction of the famous, later infamous, Horseshoe Curve to surmount the escarpment.)

Like other small railway companies in the 19th century, the TG&B was formed by a small group of entrepreneurs who sold stock in the company, issued bonds, negotiated government grants, and then dangled the future in front of municipal councils.

Caledon Township tossed $45,000 of ratepayers’ money into the pot, a trump card that not only altered the route but helped secure stations at Charleston (Caledon Village) and Alton. Although cynics called them bribes, the contributions by municipalities were officially known as “bonuses.”

A bonus was risky because it was promised before track was laid or the route even chosen, but it could go a long way toward ensuring the rail line – assuming it actually got built – would accommodate the contributing municipality.

For some townships the decision was reasonably straightforward. Albion put in $40,000 because Bolton, its key community, was certain to be on the line. The bonus from Amaranth was $30,000, because it would benefit from the branch line toward Lake Huron and from the important Orangeville station at its southeast corner. Even thinly populated Melancthon coughed up $1,200 in 1871 when it learned the rails might head north through Shelburne.

Inevitably, there was controversy. Vaughan Township benefitted enormously from the new rail line, but did not contribute a cent because it knew the TG&B had to go through its territory to get from Weston to Bolton. Citizens of Mono Township set up a cry of protest when, even though it was bypassed (along with Mono Mills and Primrose), the township council still “bonused” $45,000. Councillors argued that the line ran near Mono’s border, but this was also true for East Garafraxa which didn’t put up a dime.

Orangeville had a similar population to Amaranth’s, and raised eyebrows by putting up just $15,000. (In its defence, the village was still recovering from its abandoned efforts to build a tramway to the Grand Trunk line in Brampton.) A major dustup involved Luther Township whose council offered a $500 bonus if the line made it to Grand Valley by 1870. When the first train chugged through a year late, Luther refused to pay. In response, the rail company built the Grand Valley station a mile out of town.

Was the ‘Bonus’ Important?
In 1870, it took $2.5 million to build, equip and staff thecompleted TG&B. Just under $9oo,ooo (about 35 per cent)of that was raised through bonuses. The municipalities inthese hills contributed about $175,ooo; Owen Sound and GreyCounty about $3oo,ooo. The rest was raised from Wellington,Bruce and Huron counties and the City of Toronto.

Did the Money Make a Difference?

Mono Township complained for years that its bonus had been a wasted investment, but the towns and villages of these hills (except for Mono Mills) along with the surrounding countryside experienced a mini-boom. There were new markets, an expansion in available goods, new opportunities and, above all, a new lifestyle: people here had become connected to the outside world.

Ironically, it was the TG&B itself that failed to thrive. For one thing, the branch line from Fraxa (by Orangeville) never did make it to Lake Huron, ultimately terminating in Teeswater. However, it was the decision to build a narrow gauge system (see sidebar Did You Know) that more than anything ruined the TG&B as a corporate entity.

In 1883, the system was leased to the Ontario and Quebec Railway and just a year later it was absorbed into the mighty CPR. By this time all talk of bonuses from municipalities to win railway lines had long since passed. In fact, councils hardly ever talked of local passenger railroads again – until the 1960s, and then it was only to say goodbye to them.

The “Wheelbarrow Line” Goes Down

The TG&B became the butt of cynical jokes when it chose to build a“narrow gauge” system (featuring a track width of 3’6″/1,o67mm). Thereason was money. Narrow gauge used smaller, less expensive rollingstock and was cheaper to build. But the loads it could carry were alsosmaller, and it was incompatible with the standard gauge (4’8″/1,435mm)used by most other Canadian railways. (To get TG&B trains from UnionStation to its terminal at Weston, it was necessary to install a third trackinside the Grand Trunk’s standard gauge tracks.) When the TG&B wasabsorbed into the CPR in 1884 the entire line was rebuilt in standard gauge.