Staying the Course for 175 Years: A story of determination and independence in the face of daunting challenge and bewildering change. 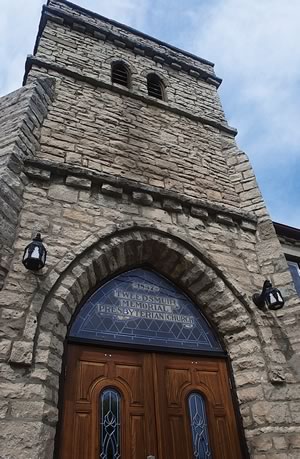 From logs to stones: Bethel

The origins of the pioneer churches that dot these hills hang on two pegs: a scattered population of settlers hungry for communal, religious leadership, and a resourceful clergyman willing to come to the bush to provide it.

In the case of Tweedsmuir Memorial Presbyterian Church, the second of these historic pegs was a blur of energy better known as the Reverend Alexander Lewis. He not only ministered in Caledon and Erin over his long career, but starting in 1837, he founded congregations in Mono Mills, Mansfield, Mono Centre – and Orangeville, where a log church named Bethel was built in 1840 on land behind the present town hall.

Although the redoubtable Rev. Lewis also served as postmaster of Mono Mills, land commissioner for the Crown and magistrate for the District of Simcoe, in 1858 he still found time to oversee the building of a new stone church for his Bethel congregation on land where Orangeville’s post office now stands.

While this historical chapter was playing out locally, theological differences had caused the Presbyterian Church around the world to split into several branches. The Bethel congregation that moved to the stone church was known as Auld Kirk or Old Bethel, indicating its allegiance to one of the four branches of Presbyterianism that prevailed in Canada.

From stones to brick: St. Andrew’s

No sooner had Old Bethel settled into its new quarters when another Presbyterian congregation, calling itself Zion, built a church just a short stroll away. Zion was allied with a different branch, so Orangeville now had two Presbyterian churches, separate, yet side by side. And although Presbyterians in Canada officially resolved their differences in 1875 and reunited under a single umbrella, both Orangeville congregations remained intensely loyal to their own arrangements.

However, in 1877 Zion’s frame church burned to the ground and that fire resulted in two important developments. One was physical and permanent: Zion started building a grand house of worship that still stands on Broadway. The second was spiritual: In 1880, following extensive negotiations (especially over how to pay for the magnificent new church), the congregations of Old Bethel and Zion became one, under the name St. Andrew’s. The arrangement seemed ideal and enduring. And it was – until 1925.

On June 10, 1925, in a legislative undertaking unique in the world, the Parliament of Canada passed an act creating the United Church of Canada, merging Methodists, Congregationalists, Unionists and Presbyterians into the largest Protestant denomination in the country.

The merger, voted on church by church, was supported by all but about 30 per cent of Canada’s Presbyterians. At St. Andrew’s, the resisting vote was 40 per cent. So although St. Andrew’s became a United Church, it did so minus a significant number of members, most of whose roots went back to Old Bethel. On June 11, the dissenters officially left St. Andrew’s and within a month established the Continuing Presbyterian Church in Orangeville.

Because they needed a church, and because the community suddenly had two United churches, this new/old congregation tried unsuccessfully to buy what was now St. Andrew’s United. It then struck out again in an attempt to buy the former Orangeville Methodist, now First Avenue United.

(In an ironic repeat of the Presbyterian experience from the previous century, the two United congregations carried on separately for years until, like the Presbyterians, fire brought them together. When Orangeville High School burned down in 1948, First Avenue United Church became the school’s main emergency quarters as its congregation finally merged with St. Andrew’s under a new name: Westminster United.)

Meanwhile the Continuing Presbyterian congregation was quietly moving on. For a year they worshipped in the Gem Theatre on Broadway where the Roman Catholic owner, Sam Merlina, gave them space rent-free. (Their hymn books were loaned by the Baptist Church.) In rapid order members raised $3,000 to buy the former Orangeville Business College (next to today’s CIBC) and renovated it for $975. In April 1926, the Continuing Presbyterians became a storefront church.

From storefront back to stone: Tweedsmuir

The storefront arrangement was conceived as a temporary blip on the way to a “real church,” but in 1929, while the congregation was still pausing to catch its breath, the Great Depression turned fundraising into a seemingly impossible dream and blindsided everyone’s hopes. Everyone, that is, except the Ladies’ Aid at Continuing Presbyterian. In 1934 they announced that no matter what anyone else had in mind, they were going to raise money for a new church. 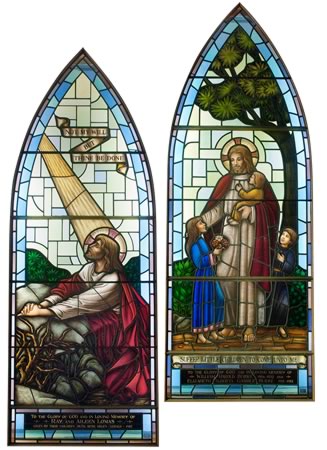 These beautifully crafted stained glass windows on the south wall of Tweedsmuir Church come from Waldemar Presbyterian (Burke’s Presbyterian), which was built in 1887, but is now closed. The Waldemar congregation joined Tweedsmuir in 1995.Photo by Rosemary Hasner, Black Dog Creative Arts.

It took seven years – seven Depression years with the entire congregation deeply involved – but by May 1941 a fine stone building stood on the corner of Orangeville’s John and York streets. (The Ladies’ Aid bought the pews.) And it had a new name: Tweedsmuir Memorial Presbyterian Church (see sidebar).

For the second time in Orangeville’s history, a Presbyterian church had been built with stone, this time from a dismantled cement plant that once stood by the railway station. The same source of stone was used again in 1959 when the expanding and very busy congregation enlarged the church and added an education wing, and then again when the narthex was enlarged in 1979.

Such steady development and expansion at Tweedsmuir counters the contemporary notion that church life is fading. It is true that closed church buildings abound in these hills – of the 19 Presbyterian churches built in Dufferin County in the 19th century, for example, only five host Presbyterian or United congregations today – but at Tweedsmuir Presbyterian, 175 years after the Bethel pioneers first prayed together, the trend is definitely in the opposite direction. There is still more stone stored in a farmer’s field outside Orangeville, just in case.

Located in beautiful downtown Orangeville at 6 John Street at the corner of Broadway and John Streets right across from the Royal Canadian Legion building.
6 John Street, Orangeville, Ontario, L9W 2P1, 519-941-1334

John Buchan, Lord Tweedsmuir of Elsfield (b.1875), served as Governor-General of Canada from 1935 until his death in 194o. The author of The Thirty-Nine Steps and other fiction, he was highly regarded and much loved by Canadians in his role as G-G. Buchan was a staunch, lifelong Presbyterian, and when Lady Tweedsmuir was asked permission to use his name for the new church in Orangeville, she graciously agreed. The church elders, incidentally, had silent hopes the permission might also trigger some cash for the building fund, but her generosity was limited to a pair of silver candlesticks.

Although there are other active congregations in the hills with origins in the 1830s, such as St. Mark’s Anglican in Orangeville and St. John’s Anglican east of town on Highway 9, as well as St. Patrick’s Roman Catholic in Wildfield, the only original church building that can claim 175 years is the Melville White Church (above) on Mississauga Road, south of Belfountain. It was built in 1837 by a Presbyterian congregation that had met in private homes from about 1831. Melville White Church became a United church in 1925, after first absorbing the disbanded Congregational Church of Greenlaw, but was officially closed in 1964. More recently, it is enjoying new life as a site for weddings, art shows and community events.

To celebrate the 175th anniversary of the White Church, several events are planned later this year.