Local Hero: Cody Gillies’ feet finally got a break after more than 885 kilometres.

Cody Gillies: One of our 2012 Local Heroes

There is a certain humble wisdom, born from hard experience, in the eyes of young people who accomplish extraordinary feats. Of our local heroes over the years, it’s been there in Dufferin paralympian Brad Bowden. You could see it in Caledon’s Jade Scognamillo, teenage marathon swimmer of both lakes Erie and Ontario. Now it burns just as bright in ultra-distance runner Cody Gillies.

As described in the summer issue of this magazine, Cody set himself a monumental task this year. Dubbed The End-to-End Challenge, his plan was to run the full length of the often treacherous Bruce Trail, some 885 kilometres between Tobermory and Niagara, and to do it in record time. In addition, he set a goal of raising $25,000 for the pediatric unit at Headwaters Health Care Centre in Orangeville. The start date was September 25.

What kept him going? “Well, if this had just been about breaking the record, it would have been impossible. But from the first donation – it was $20 – I knew I had to do it. The promise was to finish. It took me a while to realize that there’s no way I could have finished without the community support.”

Cody has no trouble picking a low point during his ordeal. “Day five. I could barely even walk because my hip was locked up. It took me five hours to cover 23 kilometres.” He took a half day off, and after a binge of – horrors – McDonalds’ food, was back on the trail. “But,” he says, “my mind had changed. The rest didn’t matter. All that mattered was putting one foot in front of the other.”

But there were high points along the way too. The best was near Milton, with ultra-runner Kendra Olsen. “It was the last five k of the day, and it felt like a training run. I just felt normal, looking around at the stars.”

Challengers wait in the wings, and Cody’s record may be short-lived. Generous in victory, he offers help. “If anyone wants to attempt it, I would love to go out and spend a couple of days on the trail with them.”

Two weeks after the run, Cody’s hips were still sore, but he has gained back the ten pounds he lost, and his swollen ankles have returned to normal. He gushes with praise for all those who helped make it happen, saving special notice for girlfriend Allison Kennedy. “She took two weeks off work to follow her sweaty, stinky boyfriend. Amazing.”

“The real gift I’ve taken away is that I learned how hard I can push. It’s 80 per cent mental, 20 per cent physical. Now for the rest of my life I can use this as a yardstick.”

Mono Cliffs Inn in Mono Centre will host an evening celebrating Cody’s achievement on Friday, January 11, 2013 starting at 6pm. The fundraiser includes dinner, a presentation from Cody, and an open-floor discussion. 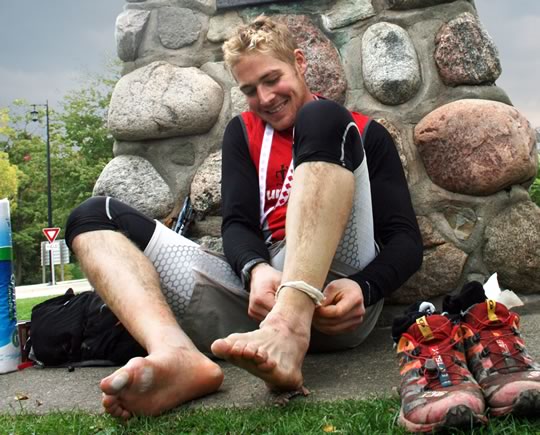 Local Hero: Cody Gillies’ feet finally got a break after more than 885 kilometres. 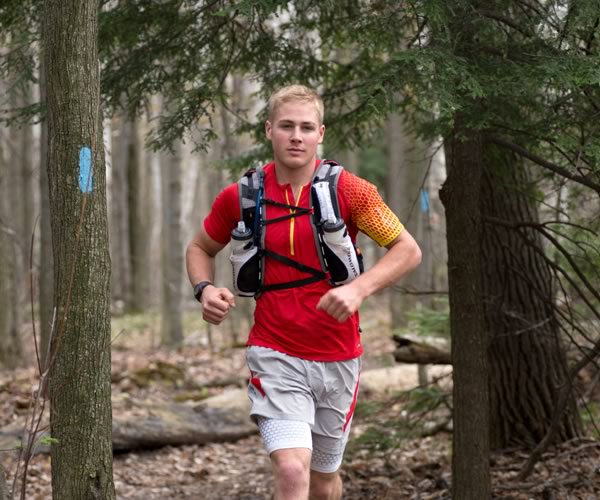