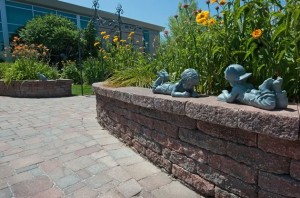 The flower beds at Jesse’s Sensory Garden at the Caledon Centre in Bolton (below) are raised to wheelchair height. The garden provides a safe, barrier-free place for all ages and abilities. Photo by Rosemary Hasner / Black Dog Creative Arts.

Wander through a garden, any garden – large, small, manicured, au naturel, pampered or neglected – and experience a sensual feast. See, touch, smell, hear and taste Mother Nature’s offerings. A sensory delight to be sure, but more significantly the experience can be therapeutic, helping to balance circadian rhythms, lower blood pressure, reduce stress and increase absorption of Vitamin D.

The notion that gardens enhance well-being and stimulate the senses has been embraced by two local service agencies. Both Community Living Dufferin and the Caledon Centre for Recreation and Wellness have created sensory gardens designed specifically to be accessible to everyone, regardless of age and ability.

Jesse’s Sensory Garden at the Caledon Centre in Bolton was created in 2002 as a result of the passion and inspiration of Lisa Farquharson. Lisa’s two-year-old son Jesse, whose vision was impaired by retinal cancer, was learning to use a white cane and needed a safe, barrier-free place to walk, as well as access to the centre’s recreational facilities. So Lisa spearheaded the project with the help of volunteers, friends, extended family and enthusiastic sponsors.

In 2006, when construction of the centre’s new wing required moving the garden, it was carefully dismantled for the duration. Two years later, when the building project was complete, the garden was just as carefully reassembled and reopened in a new, larger and more visible location.

“The garden is designed to accommodate everyone – all ages, all abilities – and we have a variety of people who come and use it,” said Catherine McLean, who was the Caledon Centre’s supervisor for customer service. “It is a calm and relaxing place. A lot of our patrons will come and do an aquafit or fitness class in the morning and then sit outside and have a coffee with friends.”

Sensory gardens differ from most gardens in some significant respects. In Jesse’s Garden, for example, hard, even pathways make the area accessible for people using wheelchairs, walkers and assistive equipment. To stimulate all the senses, flowerbeds are raised to wheelchair height and contain only non-toxic, edible plants that vary in colour, size and scent. Textures, such as the soft, furry leaves of woolly lamb’s ear, encourage touching and exploration, and the scent of lavender released by a simple brush across the flower stalk is immediately rewarding. The tranquil sound of wind chimes and a babbling water feature with colourful fish provide aural and visual stimulation. 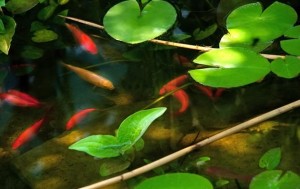 Safety is also important. The garden is located in a protected space surrounded by fences and natural barriers. Last summer, day campers with special needs frequently used the garden as a place for games, lunch and storytime. The children also planted annuals and made garden stones for the flowerbeds.

“Some children who come here have autism and tend to be ‘runners,’” Catherine noted. “They like to run and if they are contained, they just run to the barriers and are still safe.”

The sensory garden at Community Living Dufferin’s state-of-the-art facility west of Orangeville is still working out the kinks after its first summer last year, when drought-like conditions made new gardens a challenge for even seasoned gardeners. CLD creates opportunities for people with developmental disabilities through recreation, support services, creative programs and jobs at QPAC, its internal packaging plant, which specializes in custom assembly contracts.

When the facility was built in 2009, the area the garden now occupies was designed to feature only a cement pad and a tree. Sheryl Chandler, CLD’s executive director, suggested some grass – and the project snowballed from there.

“I had an idea in mind, but I’m not an architect,” Sheryl said. Through Theatre Orangeville, which shares the building with CLD, she was introduced to Bohdan Petric, a local artist who contributed to the outdoor design at Toronto’s Holland Bloorview Kids Rehabilitation Hospital.

“He was right on board from the moment he arrived,” she says. After assessing the strong west wind that swirls around the protected area, Bohdan suggested a circular stonework pattern to mimic the wind, along with raised beds and a sun shelter.

Because a garden had not been included in the initial budget, Sheryl secured the financial support of several local companies and foundations. A foundation was also set up to generate annual funds to enhance plantings.

When the garden officially opened in 2012, it quickly became a favourite spot for relaxing lunches and summer camp activities, as well as a tranquil oasis where people whose senses felt overloaded could take a break from the sometimes noisy indoor recreational environment. 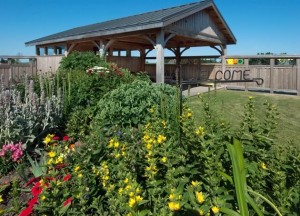 The sensory garden at Community Living Dufferin’s facility west of Orangeville (above) includes an art exhibit and offers an oasis away from the sometimes noisy indoor environment. Photo by Rosemary Hasner / Black Dog Creative Arts.

One unique aspect of this sensory garden is the unexpected art gallery created by the people CLD supports. A kiln, purchased for recreational use, became the catalyst for them to create a collection of clay masks and birds that have become features of the garden. “We did the basics, but the people we support are claiming the space for themselves,” said Sheryl, adding the artists take great pride in seeing their work displayed.

During a summer camp young adults with disabilities spent hours in the garden enjoying music and making clay jewelry, which they sold at Christmas. This summer’s plans include creating scented sachets with lavender from the garden.

The garden also became the venue for a photography exhibit. Previously, the CLD group called Click Connect had exhibited its work at the Alton Mill, but the garden provided a perfect space to display photographs for family and friends.

And the garden isn’t finished yet, said Sheryl. “We want to add a water feature, tall grasses for their soft feel and movement, and we’re looking for ways to produce sound – maybe on big cylinders that they can gong.”

Naturalist and award-winning writer Edward O. Wilson believes human beings have an “innately emotional affiliation … to other living organisms,” a phenomenon he dubbed “biophilia.” In a broad sense, this means we human beings need gardens, not only to keep us well, but also to help make us well and improve the quality of our lives.

If Wilson is right, physicians might do well to start offering this advice: “Take a walk in the garden and call me in the morning.” 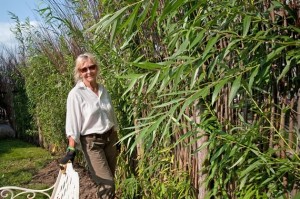 Willow trees are powerful symbols in many cultures, and the healing properties of willow leaves and bark have been known for thousands of years. So it is fitting that a wall of living willows has become the latest addition to the Serenity Garden at Headwaters Health Care Centre.

In the fall of 2010, members of Headwaters’ Shelburne Hospital Auxiliary created the stunning garden that can be admired through windows lining a busy hallway between wings. But in the background the view also included the loading dock, garbage cans and the parking lot.

Since 1998 the gardens at Headwaters have been evolving under the guidance of Lynn Sinclair-Smith and a group of dedicated volunteers. Garden guru David Warburton was instrumental in designing the original gardens and in 2011 he suggested commissioning his associate Barbara Guy Long to create willow panels to mask the Serenity Garden’s unsightly backdrop.

Barbara is a multimedia artist who, among other things, creates willow wattle installations. Wattling is an ancient art that involves weaving long, thin, flexible branches through a foundation grid to make such items as fences, trellises, walls and furniture. Barbara’s willow installations currently grace spaces throughout Canada, the United Kingdom and the Bahamas.

Barbara’s contribution to the Headwaters’ Serenity Garden began with the idea of using willow branches to create three or four wattle panels. “These were panels that I had woven quickly at my home, and they were still very green, so in the right soil conditions I thought they might grow,” she said.

Plugs of live willow were also inserted in a trench along the wattle structure. Not only did the plugs begin to grow, but some willow branches in the panels also took root. The result was so successful that Barbara created more panels to form a backdrop for the entire garden. She also built two other three-panel structures: one to mask a utility panel and another, created under her guidance by participants in a wattle-weaving workshop, behind the new specialist clinic adjacent to the hospital. In their first summer, the willow stalks grew more than 10 feet tall, waving in the summer breezes and creating a vibrant, living wall.

Barbara’s history with willow dates back to 1994 when she attended a workshop on building willow chairs. “It wasn’t the chair that inspired me as much as the medium,” she said. “It was the feeling of the willow in my hands that drove me on.”

Years later Barbara met Judith Rosenberg, founder of Spark of Brilliance, an organization that provides opportunities for people with mental illnesses to enhance their recovery by engaging in the expressive arts. Soon the two embarked on a project dear to both their hearts.

Barbara harvests her willow stalks at Ignatius Farm, part of the Ignatius Jesuit Centre north of Guelph, and she nurtured the dream of creating a living structure in a grove of willows on the centre’s grounds. In 2003 her dream became reality when she and participants in a Spark of Brilliance program built the Living Willow Room. The structure’s wall, 20 feet high and 20 feet around, consists of live willow saplings bent over to create a dome with harvested willow stalks woven laterally through them.

At first, Barbara said, some of the participants Judith brought to work on the structure were too timid even to leave their vehicle, but “When they got out and started working with their hands, it was just magical.”

Dedicated to the Guelph community for quiet and contemplative use, the Willow Room has since become a regular stop for hikers and cross-country skiers, as well as a place for celebrating birthdays, dancing, writing and just relaxing.

“There is a spiritual feeling inside the room,” said Barbara, “A feeling of safety. It has been described in many ways – some people say ‘God.’ I don’t know what it is, but when I go there I feel good, too.” 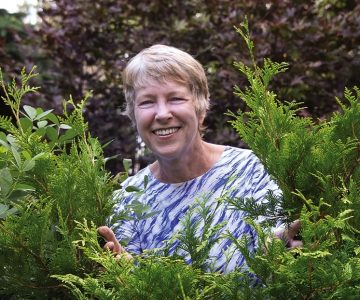 Lynn is the organizing and fundraising brains behind the Friendship Gardens, the vast network of trees, shrubs and flowers that grace the hospital grounds. 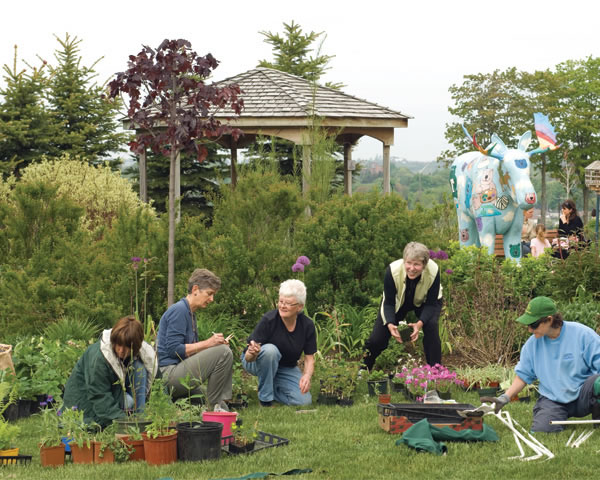 A group of extraordinary gardeners have created a natural balm for Headwaters patients.