Just about everyone in these hills, with the notable exception of the local constabulary, chuckled when the story of Bob Cook’s latest escapade made the rounds in 1906. At the Grand Valley fall fair, Bob got into a fight. Not all that rare an event at a fall fair and certainly not rare for Bob, whose tally of assault charges that year was already up to four. But this particular scrap landed him in the village jail. When he escaped a few hours later, Bob took a bar from his cell with him – then mailed it back to Grand Valley, express collect.

Days later, some of the chuckles turned to frowns when Bob upped the ante on Broadway in Orangeville. Three local constables had tried to arrest him for the Grand Valley incident, but succeeded only in enhancing his reputation when all three were left in the dust, one of them cut by Bob’s knife. After hanging out in plain sight for a few days in rural Amaranth, Bob discreetly headed for the lumber camps of Northern Ontario.

But he didn’t stay long enough it seems, for on his return to Orangeville in March 1907 the police tried again. Once more, the arrest failed. Bob had upgraded his knife to a pair of revolvers that frightened off the arresting constable. The escape was effective, but again Bob had to leave for distant parts. This time he added a twist to his developing saga – before boarding a train for Saskatchewan, he married 19-year-old Florence Reid.

In Oxbow, Saskatchewan, where the newlyweds eventually disembarked, yet another “escape” was added to the list. The Mounties were waiting and quickly arrested and jailed Bob – but then threw open the prison door when Orangeville declined to pay the rail fare to bring him back. To no one’s surprise Florence returned, though not right away, and she came alone.

By the time Bob returned to Orangeville in 1909, he had added an escape from jail in Boise, Idaho to his resumé, as well as scoots from lockups in Colorado, Minnesota and Alberta. Whether all these jailbreaks really happened is moot. By now newspapers across the country were exaggerating his escapades. In 1912, for example, Toronto’s Globe noted Bob was “considered the most widely known jail breaker in the United States and Canada.” His story was acquiring a romantic glow, but the reality was becoming much darker. 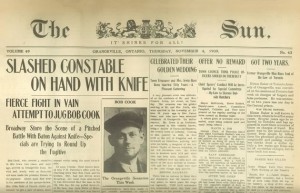 Upon his return from the West, Bob went directly to the Orangeville home of Florence’s mother to pick up clothing he had left behind. The visit turned into a violent confrontation, with smashed furniture and fists hammered through walls. Within hours, a warrant for his arrest was handed to a pair of officers from the team that had failed to bring him in two years earlier. Chief Constable Sam Speers and Constable James Halbert approached him in a clothing store on Broadway. Bob parried Halbert’s baton with a knife while Speers stood by. The constable emerged from the struggle with a serious wound to his hand, the chief constable continued to stand by, and Bob strolled down Broadway twirling the baton.

For the next two weeks there was mass excitement. A heavily armed posse rushed around Orangeville and into the rural townships responding to “Bob sightings,” much to the amusement of local citizens and the delight of the Orangeville Sun, whose “Robert the Bold” headlines drew national attention. The town council offered a reward – and began evaluating the worthiness of Speers, who was not reappointed chief constable in 1910.

Meanwhile, Bob’s soon-to-be-ex-wife, Florence, went right to the top, confronting Ontario’s attorney general, Hon. J.J. Foy, who promised to send provincial officers to help. As it turned out, the reinforcements were unnecessary because although Bob had taken off once more, he soon managed to get himself arrested again, this time in Sault Ste. Marie. In March 1910, in the Orangeville court where Bob had stood many times before, he was sentenced to two years’ hard time in Kingston Penitentiary.

There was no escaping Kingston Pen, so Bob didn’t reappear in Orangeville until January 1912. Unfortunately, he was soon back in the limelight. With a partner, he stole three sheep from a Caledon farm and sold them to a butcher near Toronto. Because the theft was a desperately amateur affair, the two were caught almost immediately and Bob went back to the Pen. For three sheep he got seven years.

In mid-1915, with the help of J. M. Deagle, a prominent citizen of Cataract, Bob was released under a First World War dispensation that allowed him to enlist for service overseas. It was thought soldiering would be ideal for a man like Bob, and it was. He fought in several battles during the Somme offensive and was recommended for a medal, but in 1917 was invalided out with a serious hand injury.

Even this meritorious service was not without an escape. Bob first enlisted with the Wellington Battalion, but deserted after getting into a fight with an officer. As usual, he took off, but signed up again in Winnipeg.

Bob’s mangled right hand seems to have diminished his penchant for brawling and he faded from public view – except for a couple of arrests in 1924 for operating illegal stills while Prohibition reigned in Ontario. When the first still was discovered near Bob’s farm west of Orangeville, a Prohibition official noted it was the largest he had discovered in several years.

Then in 1927, Bob’s story took a complex, controversial and much more sordid turn, and although it included one more escape from the Orangeville jail, the tale ended with Bob’s conviction for abducting and seducing a minor. Although Etta, the minor in question, testified she was a willing participant who wanted to marry Bob, she was only 13 years old at the time of the trial. He was sentenced to 10 years and 30 lashes.

Down but Not Out

A side of Bob no one had ever seen was revealed as he walked to the gate of the Kingston Pen to serve his sentence. With tears running down his cheeks, he hugged his mother and said, “I’ll never see you or my poor old father again.” Indeed, by the time he was released both parents had died.

Nevertheless, even that long sentence had an “escape” element. In 1935, Bob got out early thanks to a general pardon that was part of King George V’s Silver Jubilee celebrations.

And he barely missed a step. By 1936, he was back to making illegal whisky and brawling. A still on his farm earned him a five-month jail sentence, but he got a pass on an assault charge because the brawl was so tame. It seemed perhaps that “Robert the Bold,” at age 58, was becoming “Robert the Mellow.”

If the test of a man’s character is how others see him, the fact Bob’s neighbours organized a petition calling for a reduction of his ten-year penitentiary sentence is revealing. It’s curious too that every time he departed for Kingston, a crowd of well-wishers gathered at the train station to see him off. Modern psychologists would also have an opinion, for Bob’s friends – and even Orangeville police officers – consistently described him as “mostly normal,” though given to episodes of extreme behaviour. “His temper was like fits,” said a boyhood friend.

On his trip to the Pen in 1927, Bob himself said, “I tried my best but things never worked. My farm was mostly swamp. After the war, us soldiers were ignored in spite of what was promised … Those sheep, all I did was drive the wagon. And now Etta, I wanted to marry her. I’ve always played the man. Now everything’s shot.”

A Right to Representation?

When Bob was sentenced in 1912 for stealing sheep and in 1927 for seducing a minor, his lawyers were delayed in getting to court but both times the judges refused to wait for them. The harsh sentences were thus handed down without defence counsel present.