For Canadian boys passing through England during World War I, the Perkins Bull Hospital for Convalescent Canadian Officers offered family warmth and the comfort of “home sweet home,” something all of them desperately needed.

Choosing a thank you gift has challenges. The gift should be thoughtful, of course. It has to be appropriate. And ideally it should stand out a bit, get noticed by being special. In 1918, with the guns of the Great War finally silent, a young Canadian officer named Grant McKeough was trying to find a gift that met these criteria, but he faced an even more intimidating challenge. The man he was so anxious to thank was one of those people who already had everything and seemed to be one of those who had already done everything too!

That man was William Perkins Bull and the reason McKeough – and hundreds of soldiers like him – wanted to say thank you was that Perkins Bull and his wife Maria had carved out a circle of sunshine for Canadian boys in the terrible gloom of World War I. They had set up a hospital, one like no other.

A Canadian Home in England

The reason the Perkins Bull Hospital for Convalescent Canadian Officers was so unanimously treasured by the men who stayed there was that the project didn’t start out as a hospital. It began as a home away from home. The house that held this home was “Wynnfield,” a mansion in one of the ritziest areas of London, England, and the former residence of Sir Ernest Shackleton, the famous explorer.

By the time World War I began, the owner of Wynnfield was William Perkins Bull, a Peel County boy who through sheer talent and effort – and with the ideal mate – had become very wealthy. Raised on a farm in Chinguacousy Township, he was now a lawyer much in demand, an owner of huge swaths of real estate and an entrepreneur with worldwide business and financial interests. In 1912, Perkins and Maria had moved their young family from Brampton to England to better administer their extensive international connections.

When war began in 1914, Perkins immediately offered himself to fight, but at age 44 with six children he was, understandably, ruled ineligible. But never one to stand on the sidelines (equally true of Maria), he soon found a way to contribute to the war effort in a way that incorporated his wealth, the grand size of Wynnfield, and the boundless energy that characterized the Bull family.

As London filled with military personnel in training, on leave, or convalescing, Canadian officers – who did not always get the welcome they deserved – found it increasingly difficult to find places to stay, so late in 1915 the Bulls offered their home. Five of their six children were in boarding school, so they bought extra furniture to fill the empty rooms and let it be known there was now a place for Canadian boys to relax, refresh and feel at home. In no time at all, Wynnfield was filled to overflowing every night.

A Hospital is Added

Although Perkins had opened the family home to Canadian officers with his characteristic energy and enthusiasm, the original idea had been Maria’s. Intelligent and resourceful, the former Maria Brennan from Hamilton was a perfect match for Perkins Bull. And her compassion and kindness meant she was adored by every soldier who stayed at Wynnfield. Taken together, those qualities made her next idea seem natural, indeed inevitable: establishing a convalescent hospital for Canadians. 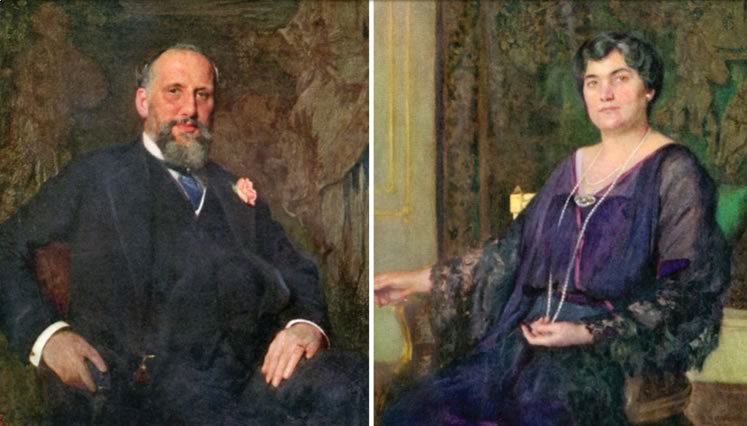 Peel historian, lawyer and businessman William Perkins Bull and his wife Maria founded the hospital in their mansion in London, England, as a home away from home for their countrymen wounded in the Great War.

Generally there were three stages to medical care in the Great War: casualty treatment at the front, longer term hospitalization behind the lines, and convalescence either at home (easily done for British officers) or in smaller, dedicated facilities. The Perkins Bull Hospital was one of the latter. As Maria listened to more and more stories about life at the front from the young men staying in her home, it became clear her welcoming arms had to spread even wider.

Thus, in 1916, the Bulls leased an empty but aging mansion next door to Wynnfield, upgraded all the mechanicals and outfitted the place to convalescent hospital standards. The refit was a typical Perkins Bull venture, for besides hospital furnishings they added a dining table that could seat 44! Not only would patients recuperate here, they would be recharged as well.

The hospital opened officially on July 16, 1916, and stayed open months after the war ended for the simple reason that convalescence and the need for a home away from home did not end suddenly with the signing of the armistice in November, 1918. On a regular basis between 30 and 40 wounded men would stay an average of two to three weeks before rejoining their regiment. Next door, Wynnfield continued its role as a Canadian social centre and frequently took in an overflow of patients when the hospital was full.

Among the features that made the Convalescent Hospital so loved and admired by patients and guests was the mind-and-body, heart-and-soul care it provided. It was affiliated with the Queen Alexandra Military Hospital, so medical issues were addressed by professional staff. But judging by the letters from hundreds of men who passed through on their way back to war, it was the opportunity to reconnect with gentleness, warmth and humanity that had the greatest impact.

Crucial to that were young Canadian women called VADs (Voluntary Aid Detachment), volunteers whose principal duty in addition to everyday housekeeping was to socialize with recovering patients. Dressed in uniforms Perkins described as “dainty, becoming and practical,” they were a reminder to men inured to the slaughter of this bloodiest of wars that the sun still shone.

As always, people who make things happen are criticized by those who watch what happens. Perkins and Maria were no exception. Among the first to complain were the Bulls’ neighbours in upscale Putney Heath who sniffed at the notion of so many young men in the neighbourhood, all socially uncertain and colonials to boot! (Perkins Bull’s memoirs say their home was “socially boycotted.”)

It didn’t help either that the Canadians did such things as play baseball on the Bulls’ lawn, especially on Sunday mornings when proper people went to church. The carping mellowed, however, following a profound endorsement just six months after the hospital opened when none other than King George V and Queen Mary came to visit and make their encouragement of the project known. (Afterward, fresh game from the royal estate at Sandringham would periodically find its way to the hospital kitchen.)

Funding issues also generated negative comments. Although the hospital bore the name Perkins Bull, significant financial support had come from the Canadian government, as well as from private donors and such associations as the Masonic Lodge. Still, the Bull family had spent huge sums of their own money and gave up their own home to make this most beneficial project happen, with no personal gain or ulterior motive involved.

What is more difficult to accept, at least by present-day sensitivities, is that the Bulls’ great venture was for officers only. But that was not out of character for the culture of the times, especially for the military. A century ago, officers and enlisted personnel rarely associated socially, and the Bulls’ naturally gravitated to their own class.

In a letter to a Canadian official in 1917, Perkins summed up succinctly what he and Maria were trying to do. “We simply try to make the boys forget the war,” he wrote, “and forget that they are not in Canada.”

How they accomplished that, with effort and attention to detail and a myriad of special favours, is a tribute to their energy and their generosity. Fancy dress balls, theatre tickets, nightly dinners around the huge table, lawn parties with live bands, all at the Bulls’ expense, represent the grander side of things. But it was the quieter, more personal actions that perhaps best explain the depth of gratitude from the Canadian officers who passed through.

Typical is the case of Perkins taking the time to chase down lost luggage for soldiers who’d gone back to the front, dealing at length with the CPR over a lost carton of maple sugar, arranging to have Canadian newspapers on hand to help stir the feel of “home,” or quietly paying a London hotel bill for a Canadian officer who had either forgotten or ignored it. Add to this the flurry of personal letters he and Maria wrote to parents of the officers, sometimes reassuring, sometimes in sympathy, or other letters using their connections to correct a personal problem facing one of their “boys.”

The Bulls’ efforts on behalf of Canadian officers came from the heart. And the officers’ gratitude was returned from the same source. The hundreds of letters of thanks are proof of that, as are such gifts as the “Loving Cup,” a silver tankard presented to Maria and engraved with the names of many of the officers who stayed at the hospital, and bronze and ceramic bulls presented by an officer who scoured antique shops throughout England and France (the Bulls were collectors).

And what of young Grant McKeough, the officer who thought so long and hard about a truly special thank you gift for someone who already had everything? He found it in France: the casing from a 100 pound artillery shell. Perkins Bull was, in his own words, “tickled to death” with it. Now he really had everything!