Two of a Mind

Wayne White says that when he was a kid, “The Lions Club made it possible for me to play hockey.” That experience introduced him to the idea of giving. “Ever since,” he adds, “I’ve wanted to give back to the community.” Wayne and his wife Wanda, both retired elementary school teachers, are doing just that – in breathtaking fashion. 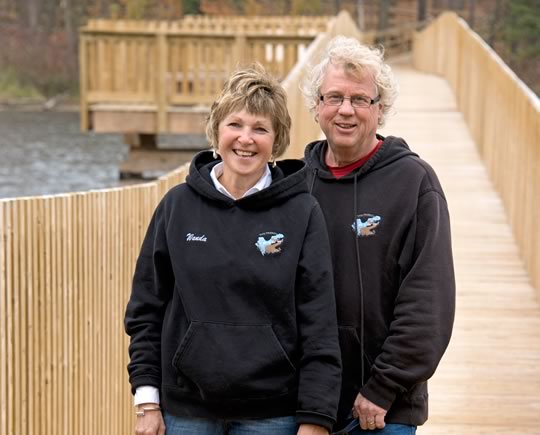 “When you put your mind to it, you can do anything.” Photo by Pete Paterson.

A list of their recent joint and individual volunteer activities fills a typed page. Given their background in education, it’s no surprise the list features numerous youth initiatives. Wanda, for example, has volunteered in kindergarten classes, and Wayne coaches volleyball. Together, they help with several outdoor education programs. The pair has also developed a very close relationship with Santa and Mrs. Claus, impersonating them every year at Headwaters Health Care Centre’s Candy Cane Fair. Wanda has served as president of the local chapter of Big Sisters and even crochets hats for newborns at the hospital – 338 last year alone.

Service clubs have also played a big role in their lives. Wayne has been a member of the Orangeville Lions Club for 30 years, at one time serving as district governor. Wanda was the charter president of the Amaranth Lions, where she was instrumental in starting and running the Orangeville Dragon Boat Festival.

But Wayne and Wanda are quick to point out that they don’t really care which club sponsors activities. The two are always willing to lend a hand at other events, such as the Rotary Club’s Ribfest and Make Orangeville Shine initiative.

The couple says their most rewarding work has been their involvement with Friends of Island Lake, which has spearheaded the planning and construction of the popular trails and bridges that will someday circle this body of water on the outskirts of Orangeville. Wayne currently chairs the group and Wanda is events co-chair, but the two aren’t afraid to roll up their sleeves and get their hands dirty. They have worked on everything from preparing lumber for installation to collecting scrap metal for fundraising.

They also believe their work on the trail will be their most lasting volunteer legacy. “With many volunteer things you don’t really see the results. For instance, our work with kids or the Headwaters Human Library touches our hearts, but with the trail it’s tangible,” says Wanda. Wayne agrees: “The trail will always be there and we take pride in that.” Also proud is Wayne’s mother, who bought a bench on the trail to celebrate their good deeds.

Such a huge community contribution would be a major undertaking for anyone. It is perhaps even more extraordinary when you consider that Wanda has Stargardt macular degeneration and has been legally blind since her early 20s. Perhaps the experience has been educational. Wanda says the biggest thing she has learned about herself over the years is “When you put your mind to it, you can do anything.”