A Memoir. Even the sound of the old ATV holds a memory of him, puttering in on it from his little house next door every morning.

Once upon a time, the American writer Cormac McCarthy said that if you aren’t writing about death then you aren’t writing about anything worth writing about. I guess the idea there is that we define life against death. Everything we do, everything we value and hold dear – and the reason we hold it dear – springs from our mortality. In a great little book by Roland Barthes, called Camera Lucida, he looks into photos of long dead people and wonders why he is alive “here and now” – leaving unasked the question of why his beloved mother is not.

This spring marks five years since my grandfather died. People traditionally observe anniversaries in multiples of five for some reason. I don’t know exactly why. The 63rd anniversary of a company just feels less interesting than the 60th. So this is in keeping with tradition: Five years ago, in April, my father found his father dead behind the barn. It was evening. I remember a deep iodine sunset – through which, by coincidence, I went out on my first licensed motorcycle ride. There are always little coincidences.

It was fitting, the way it happened. A heart attack, while taking trash out to the burn pile (environmentalism was for a later generation). The coroner suggested it happened so fast he probably died before he hit the ground. A quick exit.

In his final years, he would sometimes tell us just to toss him over a hill out back when his time came and forget about the whole matter, but I think that was probably illegal. It could have been he believed in being gone once you’re gone. A clean break. But by the end the whole farm was haunted by his presence – not literally, of course, but made up of his living memory. Perhaps what he meant was that our actions make us up, and our bodies are disposable.

This was his farm for decades and, like some Sunday school parable, his handiwork was palpable in every part of it. He chored as much as he could until he died. As his body grew older he slowly put more and more of himself into his work, building up this living landscape of memory. Even the sound of the old ATV holds a memory of him, puttering in on it from his little house next door every morning. He and my grandmother traded the farmhouse for that little one when my dad took over and started having kids. 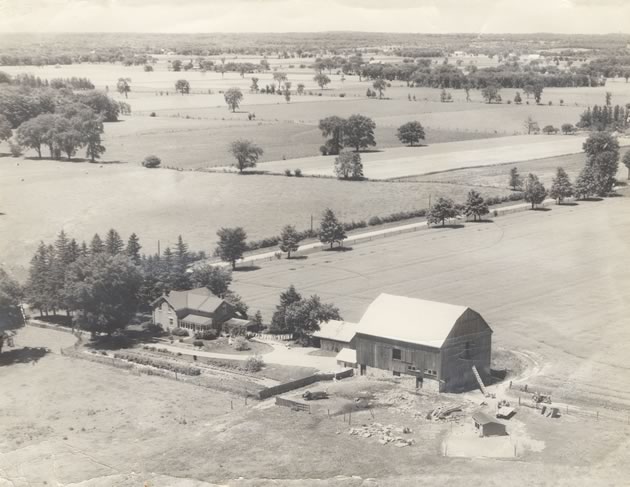 An aerial photo of the Hostrawser farm near Cheltenham as it was in the 1950s.

I’ve pulled out all these pictures from the photo cabinet for research, from the time before we had these nice, organized digital cameras. Shots of motorcycle races are mixed haphazardly with birthdays. Wedding shots are mixed with shots of the living room as it was being renovated in the ’90s. When the wallpaper was torn down we found graffiti my dad and his friends had made as teens, back when the old paper was first put up. For fun we all traced ourselves onto the walls before re-papering them. A family of silhouettes, as if all of us had stepped out of the picture and wandered off like ghosts. 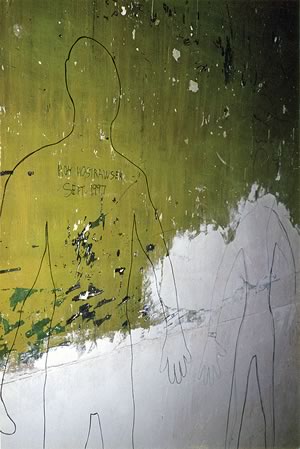 One of the silhouettes traced on the living room wall before it was repapered in the ’90s – “as if all of us had stepped out of the picture and wandered off like ghosts.”

None of us kids will inherit the farm. The quota has just been sold and the land will follow in time. My grandfather expected this, having moved here mid-century from the lands now under the Chrysler plant in Brampton. He figured the small dairy farmer would get squeezed out. Rising production costs, more complicated equipment, more stringent regulations – eventually it becomes too expensive to compete. But, that said, I can’t shake my guilt entirely.

It wasn’t until he died that I began to realize just how much we are shaped by our past. I gazed backward from this bright future I have imagined for myself to see my past collapsing behind me. It wasn’t until then I really absorbed what it meant that his farm would be ploughed under, the barn pulled down, and the house abandoned and demolished. Every time I see his picture I wish I could ask how he felt about that. But the photos seem to look past me.

When a loved one dies, people appear and begin to tell their stories. It came up eventually that my grandfather had once offered my little brother twenty dollars to touch an electric bug zapper. My brother got the money and my grandfather thought it was just about the funniest thing he’d seen. I never saw that side of him. Later, as I began to explore the photos and stories he left behind, I realized that, despite all those years and years of seeing him come down the driveway each morning, I hardly knew him at all.

So five years, then. In the time since his death, I have made a point of growing close to my surviving grandmother. She shows me glimpses into the past, into his life and her own. It’s a frustratingly small window, but it helps. It helps to see what I missed, if only so I can miss it. I think the greatest gift in a loved one’s death is grief. It’s a whole lifetime of emotion in one moment. I didn’t realize, that night in April, what I had lost, but I recovered something in my decision not to miss out knowing my grandmother. I owe my mindfulness to him.

A story: On his first day of high school, my grandpa climbed to the top of a hill on the playground and dared anyone to bring him down. He fought every boy who tried and beat every one. Or so it goes.

About a month or so before he died, he started getting me to help him take the trash back for burning, when I was around. It took him forever to lift himself off the ATV, his legs stiff and filled with hardware. He would have me dump the barrels with him to save himself effort. One day I hugged him – briefly, awkwardly. I wanted to make sure I did that at least once before he died, knowing it would be sooner or later. He didn’t seem to know how to react. There was no special moment. The hug was stupid and I knew that. I like to think we said more, really, every day when we waved to each other as he puttered out the lane after chores.

The minister who presided at his funeral mentioned to us that she had barely known him despite my grandmother’s being in the choir. He came to her first service and shook her hand afterwards, saying it was nice to meet her but “you’ll never see me again.” And she didn’t.

He was like that. I don’t think that my grandfather had much time for angels. His life was earthly. It was the earth. He lost an eye and a fingertip and had two knees replaced and his hip rebuilt and was run over by a tractor during his career. After the tractor incident he told my grandmother he had just hurt his back and didn’t let the truth out until it hurt too much for chores. Only then did he go to the doctor.

The last part of his body that broke was his hip. I remember him sitting bored in his recliner in the TV room as it healed, watching the screen flash. The desolation of it crushed me. Easter came and at the family dinner the conversation veered toward the topic of the future. He said he didn’t expect to make it to another of these dinners. He must have finally accepted it at some point, and like that – so it seems now – he just died. I think I choose to believe he was not a man of faith because going to heaven would mean leaving the farm. 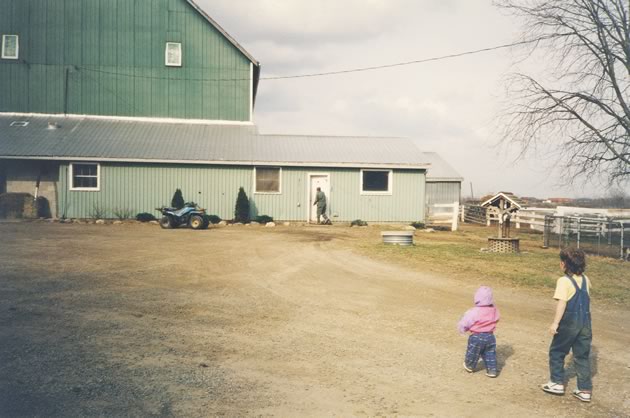 The writer’s grandfather steps into the milk house on a long-ago spring day, while his siblings look on.

But, of course, our memories are always our own. Remembering someone is a series of choices – thing diminished or elaborated, things clutched tight to our heart. An entire life disappears, leaving only moments to be sorted through – a stack of pictures without their context. In choosing what moments to pluck out and keep we’re actually building ourselves. In that sense, McCarthy is right after all. Life is a thousand goodbyes, each one more precious. Every choice I make is the death of one possible future. One possible me. Five years after that evening, I realize I am at peace with this.

I will not be a farmer like my grandfather was, or my father is. The farm will be sold to ruin and my family will move away and move on. Nothing of this history will survive, except for what we take with us. So this is my choice: The ghosts in these doomed old walls won’t be forgotten. I have taken up as many of them as I can.

About the Author More by Jack Hostrawser

Jack Hostrawser is a past recipient of the York University President’s Prize in short fiction and has been featured in Steel Bananas, Existere and The Quilliad. He sometimes chases tornadoes and is being taught patience by an old motorcycle. His family farms on McLaughlin Rd. near Cheltenham.
Show 9 Comments