A hundred years ago, our community newspapers in this rather quiet patch of rural Canada tended to bury the outside world in the back pages. But when Canada followed Britain into war, everything changed.

On June 28, 1914, Archduke Franz Ferdinand, heir to the throne of the Austro-Hungarian Empire, was assassinated in Sarajevo. It did indeed become a “shot heard round the world,” but for the weekly papers in these hills, the event was simply too remote to disrupt the focus on local concerns. The notorious Bertha armyworm, for example, had appeared in plague-like numbers and was threatening to chew down crops all the way from Georgian Bay to Lake Ontario.

If that weren’t scary enough to country people, there was the news that Melancthon farmer George Coutts had lost 17 cows in two weeks to a disease that looked like anthrax. Other local issues ranged from the village level (Palgrave could not attract a teacher to its local school despite the exceptional salary of $700 a year) to the regional level (37 Lodges had marched in the 1914 Orangemen’s Parade in Shelburne, but officials were in a dither because five Lodges, without apology or explanation, had failed to appear).

Meanwhile at the provincial level, James Whitney and his temperance-supporting Liberals had just been re-elected to Queen’s Park and prohibitionists across Ontario were – with appropriate sobriety – dancing in the streets. Altogether, there was too much going on at home to fret about matters in far-off Europe.

The early summer of 1914 must have seemed an exceptionally peaceful time in these hills. Even the provincial election, usually worth a brawl or two, hadn’t aroused much feeling. The Orangeville Sun called it the quietest one in memory. The Brampton Conservator got a little more excited and declared Peel safe (from liquor) for another ten years, while the Bolton Enterprise barely mentioned the election results, concentrating instead on the year-end marks at Bolton Public School.

With politics and booze out of the picture, sports news had taken over. Alton’s baseball team was hot. So was Erin’s, so the traditional Alton-Erin competition was on again. Brampton’s lacrosse team, the Excelsiors, had travelled all the way to Vancouver for the Mann Cup and lost in a controversial, protested game. And the most popular sport in the world in 1914 – boxing – earned headlines when Jack Johnson successfully defended the heavyweight crown he’d won from Canada’s Tommy Burns in 1908.

It was, though, the proverbial calm before the storm. Soldiers in the millions were being mobilized in Europe that July, but subscribers to local newspapers here were informed instead that the Shelburne branch of the Women’s Christian Temperance Union had installed a public drinking fountain across from Chalmers’ and Puckering’s store, and that in Grand Valley Ed Broadhacker’s 13-year-old son had recovered from his fall off a load of hay.

When they scanned the national news, readers learned of a new design for the Canadian $2 bill, that the Anglican Church of Canada was planning to change “hell” to “hades” in the Book of Common Prayer, and that a confused whale had been trapped in Charlottetown harbour.

Was Europe Just Too Far Away?

Not that international news was ignored in the local press. The Home Rule struggle in Ireland was updated every week, as were the chronic civil wars in Mexico, but much of what made it to print was wire-service “fill.” The Erin Advocate, for instance, in what must certainly have been a slow news week locally, devoted space to Queen Wilhelmina of The Netherlands and her thoughts on losing weight. On July 10, the Bolton Enterprise covered Franz Ferdinand’s elaborate funeral in Vienna in a three-line blurb that was nearly swamped by a huge ad (with an unfortunate typo) for “Lambert’s Hair Groth.”

The Orangeville Sun ran the same three funeral lines from the wire service, while giving more coverage to a 5¢ bounty on rats being offered in Memphis, Tennessee. None of the weeklies reported on the frenetic diplomatic activity in the capitals of Europe, or explained that every major power there was preparing for war, even though the wire services offered this information.

In the quiet comfort of these hills, it seems that kind of far-off news just didn’t make the cut.

Then, on August 4, Britain declared war on Germany. 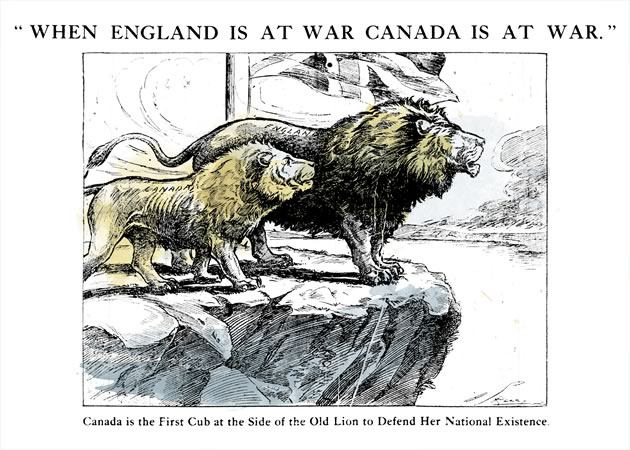 It may have been that the armyworm invasion was less serious than expected. It could be the suspected anthrax in Melancthon turned out to be an infection. Certainly it seems the passion for Mother England in these loyal and true blue hills was just waiting for the fuse to be lit. From the first week of August onward, war news exploded onto the pages of community papers, filling them almost cover to cover.

Brampton’s Conservator, with its advanced typesetting and printing options, filled its August 5 issue with patriotic drawings and lengthy columns under headlines such as “Canada’s Duty,” “Britain Fights” and “Peel is Ready.” The latest available war news filled the front pages of the Orangeville Sun and Orangeville Banner on August 6, with the back pages adding special interest sidebars (“Higher Wheat Prices Likely”), along with local, war-related items such as the fate of Alfred Popelle, an Orangeville man – but German citizen – employed at the Melville quarries, who had been detained and slated for internment.

Meanwhile, the Shelburne Free Press introduced a new front page column: “War News in Brief.” Little did its readers suspect that the column would grow far beyond “brief” and become a staple for the next four years.

The fact that local editors/publishers could extract and present so much current war news from the wire services is a tribute to their skill and hard work. And they still had to make editorial decisions about other news they felt important. Three days into the war, for example, the Bolton Enterprise ran a large column describing how the Serbian army had checked the Austrians, but the same page carried somewhat greater coverage of the hell/hades debate in the Anglican Book of Common Prayer.

The Erin Advocate could still manage to find offbeat news worth printing (Pancho Villa, the Mexican bandit – or hero – was always popular, perhaps because he was so successful in making the American army look foolish), but the Advocate always kept its readers abreast of what Canada’s “boys” were doing and what was going on in Europe.

Viewed from a hundred years later, it is interesting that the war was already being called “great” in that first week of August. But “great” in those early days meant exciting, heroic and magnificent.

In its Caledon East column, for example, the Enterprise told of two local men awaiting their call-up to the 36th Peel Regiment and mused whether they would return from the war with a Victoria Cross or similar medal. That tone soon changed. In the Orangeville Sun, the weekly front page summary of war developments was initially headlined “War Whoops.” It soon became “War News,” and as war weariness set in, “The War Today.”

As early as August 20, 1914, Sun publisher John Foley wrote this in a sobering, far-sighted editorial: “Let us get rid of the silly idea that there is glory in war. This will be a titanic struggle – the greatest war in the history of the world.” Apparently the local press could be very far-sighted too.

The Public’s Right to Know or …?

Early in August 1914, the government issued an appeal – not a directive – to Canada’s newspapers asking them not to print any information about the makeup, readiness or movements of local regiments. Days later, when 230 officers and men from Dufferin and Peel (part of the 36th Peel Regiment) were ordered to report to the new training camp in Valcartier, Quebec, practically every paper in the hills not only published this fact, but even gave specific details about who was reporting, complete with name, rank, age, home area, military experience and even marital status!

They May Be the Enemy, but …

Proof that local weeklies simply couldn’t resist human interest stories available from wire services showed up in the Free Press and three other local papers about a month into the war. Smack in the middle of opinion columns and field reports vilifying “The Hun” as inherently cruel and inhumane, these papers were pleased to publish statistics compiled by a German professor on the methods used by young men to propose to their brides, and followed this with a second item, congratulating Berlin for being first in the world to put numbers on houses.