If you’ve ever dreamed of making off with all the money at the bank, these people are for you. They’ve got the perfect cover too – it’s an inside job.

Added together, Danila Maric, Hilda Cartwright and Lucy Sanzo and have worked at Scotiabank for more than a century. Together with some of their coworkers, they volunteer to operate Scotiabank’s Team Community Program. Last year Orangeville’s First Street branch contributed an eye-popping $326,000 to support local charities and not-for-profit organizations. What’s more, all three branches of Scotiabank in the region (two in Orangeville, one in Bolton) participate in the program.

It works like this: The bank matches funds raised by its employees for local causes. The limit is $1,000 per employee who volunteers for any given fundraising project, up to a maximum of $5,000 raised by teams of five or more employees. It’s important to note that the Scotiabank volunteers must help raise the money that will be matched. One way this is achieved is through the bank selling tickets for an event at the local branch and/or at the door on the day. Organizers need to approach the bank well in advance. The volunteers then confirm whether they can be available, draw up the paperwork, and get approval from the manager. Danila says, “The money actually comes from Toronto.”

She credits manager Janet Eichholz with the growth of the program at her branch. “She’s a big supporter of the community,” Danila says. “She has been the backbone behind encouraging us to do as many as we can.”

Affectionately known by some as the Scotiabank Party Girls, their commitment to the cause is impressive. Lucy says, “We once had three events in one day. We’ve often done two. But if there’s a conflict, sometimes we have to turn one down.” Volunteers at the various branches often attend each other’s functions to provide coverage.

Hilda wishes she had even more hours to give to the program:“It’s why you’re here in this world. It’s a privilege to get to do these things.”

Beyond the positive community impact, Lucy emphasizes there’s a personal reward. “I’ve always been shy,” she says. “Attending these functions brings me out of my shell. I like to help, but it’s helping me too.” All of them remember at least one event that brought tears to their eyes, at fundraisers for causes ranging from Bethell House Hospice to cystic fibrosis to organ transplants to youth programs in Haiti.

Danila says, “I do feel it helps out the community. And it’s nice when people say, ‘You guys are amazing.’ I wish the other banks would step up with programs like this.” Plus, she acknowledges, “Usually the bank gets some publicity, through announcements at the event, the logo on flyers or newspaper coverage. I’d much rather the bank does this than spend money on advertising.”

So the ingredients for a successful bank heist are simple: Infiltrate the organization. Have a good heart, a passion for community service, and a committed team. A liking for party snacks and a big fake cheque come in handy too.

Thanks to some community-minded party girls, we really are richer than we think. 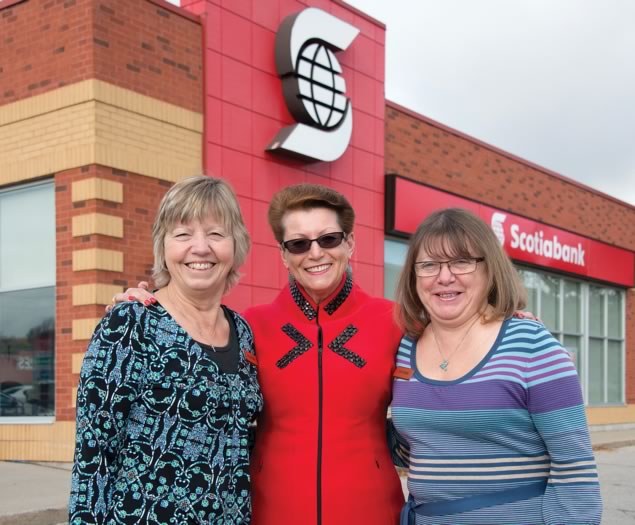