Henry was born in Caledon Township in 1860 and left just long enough to get a veterinarian degree in Guelph in 1886 before moving to Orangeville to practise.

Over a lifetime devoted to harness racing, veterinarian William Henry Riddell became a premier race driver, built a nationally renowned standardbred stable, and still had time to serve as mayor of Orangeville.

September 5, 1934. Every seat in the grandstand at the Canadian National Exhibition is filled. Down front by the finish line, spectators stand three deep. There is a buzz in the crowd as the horses line up to run for the Futurity Cup, the richest harness racing stakes in Canada. Many in the crowd are watching Al McKillop. He has won this race twice before. McKillop is in the sulky behind a speedy trotter named Iroquois. Other eyes are on a filly named Dolly Peters – she’s been burning up the tracks at Ontario fairs all summer.

Some of the fans, seriously tuned in to the standardbred world, are also studying Reta R., a three-year-old from Orangeville they know is almost sure to be in the money. But they are hesitant. These insiders know that underneath her driver’s cap, the hair is white. Henry (a.k.a. Harry) Riddell is 75 years old, and in their minds that’s over the hill for races like this one.
All eyes are on the starting gate. The field is set. A filly named Widower Evans jumps into the lead and McKillop settles Iroquois comfortably behind her. Reta R. and four others line up behind. When the horses round the half-mile track for the first time, the insiders begin shaking their heads for the field is strung out now and Reta R. is running dead last. But Harry Riddell (pronounced “Riddle”) knows what he’s got in front of him. At the far turn the field bunches, so he takes Reta R. way wide and blows past all of them, crossing the finish line three lengths ahead of Dolly Peters. (Iroquois finishes last.)

The insiders are impressed now but still wary. The Futurity is a three-heat race. Reta R. seems up to the task, but can Riddell do it again today? Twice? In the second heat it seems as if the aging veterinarian has a point to prove – right off the start he puts his little filly out front and leads all the way home. Then, just in case there’s any lingering doubt – about him or the filly – he does it all over again in the third. Harry Riddell has just shown a CNE crowd why he’s called “The Dean of Ontario Harness Racing.”

“The Dean of Ontario Harness Racing”

“Dean” was not an official title but rather a tribute by which Riddell became known not just for his amazing skill in the sulky (even at age 75), but more so for the many ways he promoted – some say revived, even rescued – Ontario harness racing in the 1920s and ’30s. Although his skill was legendary in the sport, the more fundamental and lasting element of Riddell’s legacy is what he did over several decades to improve the quality of standardbred horses in Ontario and beyond.

In World War I huge numbers of Canadian horses of every breed had been conscripted to the battlefields of Europe and never came back, so pressure to rebuild stock after the war often meant less attention was paid to breeding and lineage. Standardbreds in particular were pressed into service because they are hardier, more manageable and versatile than their high-strung, high-maintenance thoroughbred cousins. Among other reasons, that led to a decline in the quality of the breed by the 1920s, with a parallel drop in interest in harness racing.

Riddell committed himself to reversing that trend by seeking out proven breeding stock from around North America for his growing stable in Orangeville, stock with documented and proven lineage. By the time he drove Reta R. to victory at the CNE in 1934, Riddell’s stable had successfully raised the bar. At that very same “Ex,” a stallion from his stable (the sire of Reta R.) not only won a three-heat race but took first prize in the show ring. Adding to that accomplishment, three other Riddell horses took prizes for best in breed.

In 1938, during a ceremony honouring Riddell with a plaque at the gates of Orangeville’s Exhibition Park, MP Earl Rowe (later lieutenant governor of Ontario and himself a prominent horseman) praised Riddell’s contribution to harness racing, pointing out how freely and generously the Riddell breeding stock had been made available to standardbred stables around Ontario, thus elevating the level of the sport throughout the province.

But Earl Rowe was also talking about another side of Riddell’s generosity. To burnish the image of standardbred racing and raise its profile, he regularly established eye-popping purses from his own bank account. And the days surrounding that 1938 ceremony provided a classic example.

Between Dominion Day on July 1 and Orangemen’s Day on July 12 (in Orangeville, these were pretty much occasions of equal importance), Riddell sponsored three days of harness racing with a purse of $3,400 entirely from his own pocket. (To put that in perspective, the CNE’s purse for the Futurity Cup won by Reta R. in 1934 was only $100 more.)
Crowds totalling about 15,000 flooded into Orangeville throughout the celebrations. There was a baseball tournament, a track meet, four bands, a midway and an Orange Parade with 68 lodges marching, but it was racing that stole the show.

Drivers brought their standardbreds from top stables in New York, Quebec and all over Ontario, and put on a competition that, at least temporarily, moved harness racing from the sports section to the front page of major newspapers. Harry Riddell, “The Dean,” had scored again.

A man loyal to our hills

Despite repeated offers from stables in New York, New Jersey and elsewhere, Riddell never left these hills. He was born in Caledon Township in 1860 and left just long enough to get a veterinarian degree in Guelph in 1886 before moving to Orangeville to practise. By 1906 he was on town council and in 1910 began a three-year term as mayor.

Riddell’s public spirit was almost as great as his love for harness racing. He took a particular interest in improving the waterworks system and other infrastructure in Orangeville. He was a baseball fan and had a particular passion for lawn bowling. Nothing, however, surpassed his commitment to standardbreds.

Riddell never married. Perhaps there just wasn’t time – not if, by his own claim, he’d covered 50,000 miles or more in a sulky over his career. At a dinner in his honour, shortly before his death in 1943, he acknowledged that although he no longer drove in races, he was still training some 20 standardbreds at his stable. Even at the end, Harry Riddell was working on his next 50,000 miles. 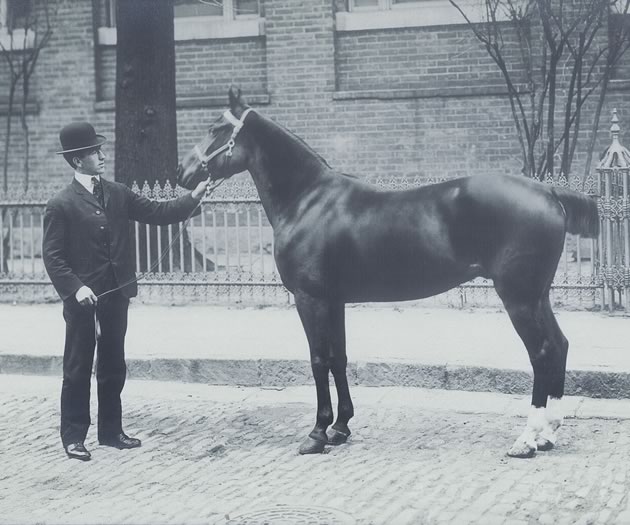 Van Riddell was the most promising foal of 1943 in Harry Riddell’s stable. As Riddell lay dying in November that year, he extracted a promise from its owner, the Hon. Earl Rowe, to race the foal in the Hambletonian, a feature race in the U.S. for three-year-old trotters. Three years later, in 1946, despite an already successful racing career, Van Riddell ran poorly in the Hambletonian. Local lore has it the colt was sick that day, but to honour his friend, Earl Rowe dutifully kept his promise. 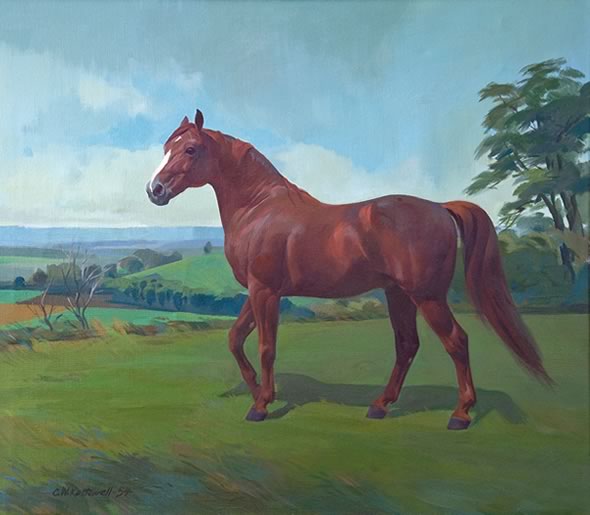 This painting is by Charles W. Kettlewell who painted Queen’s Plate winners through the 1950s and ’60s.

When the Fairgrounds Shopping Centre greeted the 21st century on the site of the former Orangeville Raceway, it marked the end of a century and a half of horse racing in Orangeville. As early as the 1850s, Orangeville enjoyed horse races every Friday and Saturday night on a straight track that ran from near present-day Forest Lawn Cemetery to a finish line near the current location of McDonald’s on Broadway.

In 1877, a half-mile oval track was built on the exhibition grounds that featured races at every fall fair and Dominion Day celebration and other occasions. The Orangeville Raceway, an Ontario “B” track, opened on the site in 1970. For nearly three decades it ran some of the most popular Sunday afternoon race cards in Ontario.

Like most horses in Harry Riddell’s stable, Reta R. was a trotter. Standardbred horses race as trotters or pacers (in separate classes). A pacer moves both legs on the same side forward in unison. Trotters move right fore and left rear legs together and then left fore and right rear. Most pacers wear hopples – straps that connect the front and rear legs on the same side – to help them keep stride without limiting their speed in a race. To trot or pace is generally inbred and instinctive in a standardbred, but to maintain the respective gait at top speed without bursting into a gallop or canter requires much training. Failing to maintain the gait during a race is called “breaking stride” and disqualifies the horse. 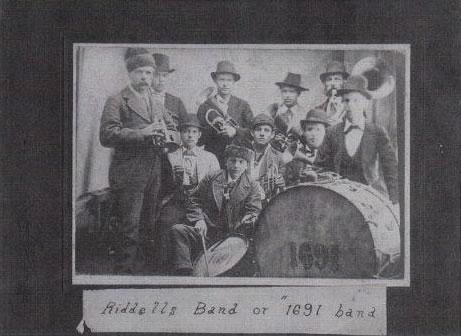 Another side of W.H. Riddell: Riddell, in the homburg, far right, was the conductor of the 1691 Band, also known as Riddell’s Band, as shown in this photo, ca 1870, from the Dufferin archives.