Parachuting Candidates into the Safest Seat in the Country

For almost 40 years after Confederation, the Conservative Party treated the riding of Cardwell – Albion, Caledon, Mono and Adjala townships – like private property. It led to some wild and woolly election campaigns.

According to the late Alex Raeburn, grand old man of Caledon and an astute observer of politics, the Conservative Party knew it could run a fence post in the riding of Cardwell and win the seat. And that certainty, he added, despite sending a few quite worthy outsiders to Ottawa, caused no end of trouble. Raeburn’s observation, perhaps a touch cynical on the surface, is solidly supported by the electoral history of the riding. From 1867 until the riding was dissolved in a redistribution before the election of 1904, campaigning in Cardwell boiled over in noisy debates, slugfests, stone throwing and even a homemade bomb!

Described below are the MPs, most of them from outside the riding, who went to the House of Commons after the dust settled. 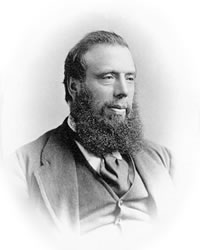 A businessman and farmer from Cookstown who tended to Cardwell on occasional visits (skipping Adjala whenever he could), Ferguson was a former deputy grand master of the Orange Lodge of Canada. He was a no-holds-barred anti-Catholic and once filibustered for eight hours straight in the House of Commons against separate schools. His margin of victory in Cardwell in the election of 1867 was thin, perhaps because the Catholics in Adjala and Albion were instinctively opposed to him.

Even his fellow Orangemen were embarrassed by his behaviour. In fact, the Barrie Examiner called him a drunken rowdy whose absence from any lodge meeting was always welcomed. Ferguson was Caldwell’s MP and, at the same time, the Ontario MPP for Simcoe South where he spent most of his time. He withdrew from politics in 1872 after suffering a head injury during an election brawl (which rumour says he’d started). 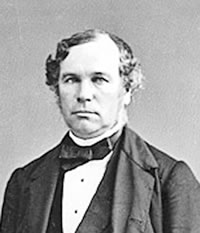 Cameron represented the riding of Peel from 1867 to 1872 and in the election of 1872 ran simultaneously in both Peel and Cardwell. He lost Peel despite the Brampton Conservator’s over-the-top support, but Caldwell was a sure bet.

The Liberal candidate in Cardwell was Lambert Bolton, reeve of the village bearing his name, whose supporters smeared anti-Cameron graffiti on commercial buildings around the riding. (It didn’t help.) In the 1874 election, Cameron defeated another local, Orangeville sheriff Thomas Bowles, the grandfather of future prime minister Lester Pearson.

A well-educated lawyer, Cameron was a mover and shaker in Canada West (Ontario) long before Confederation. Early in his career he was backed by the Anglican Church, and when he lost that connection through shady dealings with church funds, he successfully wooed the Orange Order into his camp.

His early death in 1876 at age 59 (hugely in debt) seemed part of the sad pattern of financial scandal and controversy in his life. Although his talent seemed destined for greatness, it never panned out. Cameron was essentially a citizen of Toronto. He had a law office in Brampton for a time but never took up residence in Cardwell.

McCarthy was Cardwell’s MP for just two years, but is perhaps the highest profile politician ever to represent the riding (where he was rarely seen). He was parachuted into Cardwell (from Barrie) for the 1876 by-election at the urging of John A. Macdonald.

After Cardwell, he went on to represent Simcoe ridings and became known in the House as an “object of terror” to the Liberal Party. Indeed, the main adjective for McCarthy was “fierce” – fiercely anti-Liberal, anti-Catholic and anti-French-Canadian. And fiercely pro- British. McCarthy’s influence on national politics following his short stint in Cardwell meant his impact on the riding was actually greater after he left it. 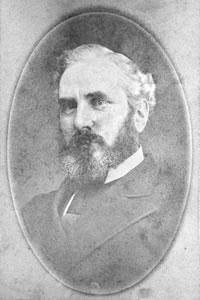 Here is a classic example of a political party’s frustration. Thomas White was intelligent, competent, industrious and an excellent communicator, a staunch Tory from Montreal whom John A. Macdonald wanted in the caucus and in the cabinet. But he couldn’t win elections.

White lost in Hamilton, then in Prescott (eastern Ontario) and then twice in Montreal. So into the play came good old Cardwell where in 1878 he defeated Orangeville’s mayor (and magistrate) Joseph Patullo – who at the time was coping with fallout from his apparent failure to close a brothel in town.

In addition to being an excellent MP and cabinet minister, White was a close personal friend of John A. and this may have helped secure his re-election two more times in Cardwell. Still, he was a “parachuter.” (After his 1878 win in Cardwell, the Conservative Party held a torchlight parade – in Montreal!)

Rumbling about outsiders was growing in the riding and following White’s sudden death in 1888, the uneasiness blew up – literally – in subsequent elections. 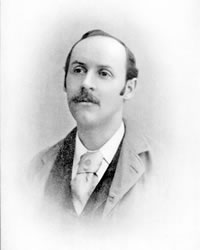 Robert was Thomas White’s oldest son. He was a dyed-in-the-wool Montrealer (and a Quebec MP for 15 years) dropped into Cardwell for the by-election of 1888. When he arrived in Bolton to begin the campaign, he frankly admitted he had no idea where he was.

His chief opponent, ironically, was another Conservative: Caledon veterinarian “Billy” Stubbs, officially an Independent Conservative, and the leader of a contingent fed up with party men from afar. Stubbs had a swath of Liberals in his camp, delighted at the opportunity to promote the split among the Tories, but he failed to attract a second anti-White faction, also Conservative, who wanted Robert “Fighting Bob” Evans of Bolton to be the Tory on the ballot. The campaign was a glorious mess marked by drunken brawls and a serious assault on Stubbs in the midst of a debate.

Loyalty to Conservative headquarters prevailed among Cardwell voters, however, and White not only won, but, as if to prove the party’s grip on the riding, was re-elected in 1891. This second time, the fight – still Tory versus Tory – was even worse. White was forbidden to use any Orange Lodge building in the riding. A rally in Hockley was shut down when the hall was stoned and another in Palgrave was terminated by a homemade bomb (no injuries). Understandably, R.S. White was never happy representing Cardwell and resigned before the next campaign in 1895. 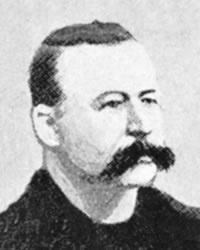 It took almost 30 years, but Caldwell finally got a truly homegrown MP. “Billy” Stubbs (one day to be a relative by marriage of Alex Raeburn) took the by-election of 1895 and was re-elected for a full term the next year.

During both campaigns the Conservative Party was in agony over the Manitoba Schools Question – whether to have publicly supported Catholic schools there as they are in Ontario today. Officially, party policy was in favour, but many supporters, led by D’Alton McCarthy, were opposed. Stubbs was a “McCarthyite,” as they were known, but ran as an Independent Conservative.

Both Stubbs’ victories not only split the local Conservatives, but caused havoc among Cardwell’s Orangemen because in each case the Conservative Party candidate he defeated was not only a local man, but like Stubbs himself, a master of a local lodge. 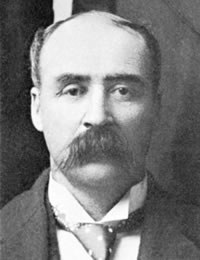 With Sir Wilfrid Laurier and the Liberals solidly in power, the Manitoba Schools Question resolved and D’Alton McCarthy gone (fatally injured in a carriage accident), the Conservative Party reunified and in 1900 chose a very uncontroversial Caledon farmer, Robert Johnston, to run against the independent-minded “Billy” Stubbs. Cardwell Conservatives recognized a loyal party man (and lodge master), and following an uncharacteristically peaceful election campaign, returned to form by duly marking ballots for Johnston. He served quietly until Cardwell riding was broken up prior to the federal election of 1904.

The Old Order Changeth Not?

Redistribution put Albion and Caledon into the riding of Peel, Mono into the new riding of Dufferin, and Adjala into Simcoe South. All three ridings continued to elect Conservative MPs for years: Peel until 1962, Dufferin until it was redistributed in 1925, and Simcoe South until redistribution in 1924. It seems Alex Raeburn’s fence post metaphor was not far off the mark.

Sir John A. Macdonald, who came from Kingston, represented three different ridings while he was PM: his home base the riding of Kingston four times, the riding of Carleton (near Ottawa) once, and the BC riding of Victoria six times!   William Lyon Mackenzie King, who was born in Berlin, Ontario (now Kitchener) grew up in Toronto and then lived mostly in Ottawa and the Gatineau hills, represented the Ontario ridings of York North and Glengarry once each while PM, and the riding of Prince Albert, Saskatchewan (John Diefenbaker’s riding) no less than four times. That same Saskatchewan riding elected Sir Wilfrid Laurier in 1896, but he resigned from it to represent Quebec East, which he had also won in that election! Like Cardwell riding’s MP, David Hillyard Cameron, in 1872, Laurier ran in two ridings at once.

Outside the Main Parties

When “Billie” Stubbs won Cardwell in 1896, he was one of four Independent Conservatives elected that year. The same election returned one Independent Liberal, two from the McCarthyite Party and two Patrons of Industry. Although the Protestant Protection Party ran five candidates in 1896, none were elected.