Debra Moore: One of our 2016 Local Heroes

Debra Moore’s life has been touched repeatedly by breast cancer. Her mother died of the disease in 2002. An aunt and a close friend survived it. 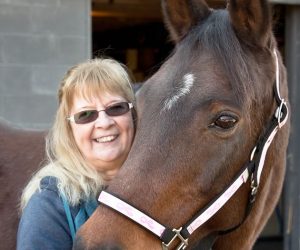 In response to that trauma, Debra, who is also a bit of a horse nut, along with her sister Lynda Hannam, founded the Trail Ride for Breast Cancer. Over the past seven years the annual event has raised $103,000, primarily for the Canadian Breast Cancer Foundation.

The ride takes place each summer in the main tract of the Dufferin County Forest near Mansfield, a spot Debra describes as perfect. And, she says, forest manager Caroline Mach has bent over backwards to be helpful. There’s plenty of space for parking and unloading horse trailers, no mean feat when you consider the event has drawn as many as 195 riders. There are also permanently marked trails, now including a pink one that specifically recognizes the ride. “Nothing better than that,” says Debra.

A full-time office manager who also helps run her husband’s trucking business, the Mono Mills resident boards her own horse, Sam, near Tottenham. Of her motivation for starting the ride, she says, “I always wanted to do some kind of fundraising. I wanted something equestrian, but something you didn’t have to pay through the nose for.” The $55 entry fee includes lunch and a $25 tax receipt from the Princess Margaret Cancer Centre in Toronto.

And beyond the cash, the event also features a stuffed-animal drive, with the proceeds donated to local emergency and family organizations.

Assisted by her 31-year-old daughter Becky and sister Lynda, as well as about 40 volunteers on the day of the ride, Debra oversees an event with many moving parts. Liability insurance for the day costs between $1,600 and $2,200. Participants in the seven-mile ride are divided into groups who depart every 15 minutes.

Various awards are available – from best-dressed rider (in pink, of course) to draws and door prizes. This year’s event was supported by at least five dozen equine-connected sponsors, and the list is growing, says Debra. “Now I even have sponsors contacting me out of the blue.”

Though she admits that in the early days, “we flew by the seat of our pants,” Debra is justifiably proud of the ride’s reputation as a safe, fun event. “Whether you’re a beginner or experienced, there’s something for everyone,” she says. “There are some challenges, but no scary stuff.”

The oldest rider to date was 89, the youngest just six. And participants have come from as far away as Peterborough, Goderich and Port Dover. Debra believes the growth is part of a wider increase in the popularity of trail riding.

“If you had told me when we started this that we would raise $103,000 in seven years, I wouldn’t have believed you,” she says. The first year, the event attracted 47 riders and raised a mere $1,400. But as the event has grown, so has Debra’s fundraising target. Her sights are now firmly set on hitting a total of $150,000 by the tenth ride. A lofty goal – but why not? After all, she believes, it’s for a lofty cause.