There’s a thread of heroism in these hills that’s hard to fit into one story, yet this strand appears again and again in the tapestry of our place. This is about how you – and likely all of us, in one way or another – are heroes. 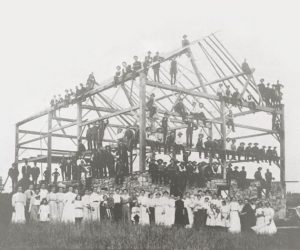 In agricultural days gone by, if someone’s barn burned down, the community came together and held church suppers, dances at the arena or euchre nights at the Orange Hall to raise funds. Then they turned up, en masse, to help with the rebuilding.

These days, most of us are more likely to have a smart phone and a social media account than a farming background. But the spirit of that act, of turning up to support, remember and rebuild, is alive and well.

Take for example the tragic story of six-year-old Spenser McFadyen. On a Saturday morning in March 2014, the SUV Spenser was travelling in was involved in a head-on collision on County Road 109 in Amaranth. Spenser died.

At the time of the crash, Spenser was on his way to play hockey in Orangeville.

A relatively unknown little boy. A horrible accident. The world might have moved on. Yet the following Saturday, at what would have been Spenser’s last game of the season, more than 700 people got up early to pack the Alder Street Recreation Centre at 8 a.m. They were there to support Spenser’s teammates and to watch as his year-end trophy was presented to his father. To Spenser’s family, they were all heroes.

When Orangeville businesswoman Temine Ash was diagnosed with a fast-acting form of leukemia in early 2016, a life-and-death race was on to find a suitable bone marrow donor for the mother of two grown boys.

The urgency of Temine’s case meant that even once a donor was found, she didn’t have eight months to spend in the queue for treatment at Princess Margaret Cancer Centre in Toronto. Instead she would have to travel to Cleveland. Though the provincial government funded the cost, Temine required a 24/7 caregiver – her husband Mike – for a minimum three-month stay south of the border.

Temine and Mike’s friends and family started a GoFundMe campaign to help offset not only Mike’s hotel and travel costs, but also the couple’s loss of income and their continuing household expenses back home. As of early November, 285 people had donated more than $46,000, and the GoFundMe page is still open.

With the transplant behind her, Temine is now back home in Orangeville. Though there is now cautious optimism about her prospects, she is susceptible to viruses and infection, and requires a special diet. The support of the community enables Mike to continue providing the care she needs as her immune system recovers.

Our sinners can be saints too. When wildfires swept through Fort McMurray, Alberta last spring, fundraising efforts to help those affected took place throughout Headwaters. One example: The LCBO at Broadway and Townline in Orangeville raised between $7,000 and $8,000. (Across the province, the LCBO raised $2.9 million for Fort Mac, a sum matched by the federal government.) Alongside their efforts on behalf of Fort Mac, that same LCBO location raised $12,500 for the United Way, which supports local causes.

Our efforts are not always about the passion of the moment. We’re also tenacious. Thousands of us hike, bike, run, cycle, golf, attend dinners and galas, or give time or money to the big-name, long-haul causes such as keeping the hospital running, curing disease or offering humanitarian aid. Think of those who have stepped up to support our new neighbours from Syria.

Others, like those who participate in the Ferguson Memorial Walk, show up year after year with a more personal motive. In 2009 Orangeville resident Heidi Lee Ferguson was killed by her estranged husband. The memorial walk was created in the aftermath. The September 2016 edition attracted 175 participants and raised $15,000 for Family Transition Place. Since it began five years ago, the walk has raised more than $78,000 for the shelter.

We don’t just step up in the face of tragedy though. Sometimes we do it in the name of hope. Take the case of nine-year-old Justin Di Nino. Justin has an extremely rare form of brittle bone disease. The condition, which affects only five per cent of those with the disease, is so severe that Justin had more than 30 fractures before his first birthday.

In the winter of 2015, Justin and his dad Brian had to spend four months in Montreal so Justin could undergo two high-risk surgeries to correct a curvature in his neck.

A group of Caledon East neighbours organized a fundraiser to help ease the family’s financial burden while they were away. Within a week of tickets going on sale, the 250-seat event – an evening of dinner, dancing and other activities – was sold out. The event far surpassed the fundraising goal of $15,000.

Reaching out to care for Justin didn’t end there. The twin son and daughter of Luca Gobbato, president of construction firm GBC Design + Build, are in Justin’s class at school. When Luca heard Justin, who uses a wheelchair, couldn’t manage the stairs in the Di Ninos’ two-storey home, he set about building an elevator.

Luca teamed up with the Baeumler Family Foundation (headed by Bryan Baeumler of home renovation TV fame) and a number of tradespeople. The foundation funded the cost of the elevator itself, while GBC and the other trades chipped in labour. The project was completed in June 2016.

Those are a few examples of a community that spontaneously comes together in times of need. There are countless others. So here’s to you, folks of Headwaters. Keep on raising those barns.

How you can support these causes

Supports youth by helping pay the cost of hockey equipment and registration.