Hit Your Rhythm with Drumming

How to join a drumming circle and reap the benefits of drumming, which include decreasing stress and anxiety.

“Does anyone remember the cereal jingle ‘Cuckoo for Cocoa Puffs’?”

It wasn’t the question I expected at the West African drumming session I was attending as part of a weekend yoga retreat. Frankly, I’d been nervous about the drum circle that would introduce me to a traditional hand drum called a jembe. What if I had no rhythm? What if my drum beats sounded like something from a toddlers’ music class? But leaders Laurin Wolf and Jason Maraschiello, owners of Kala Yoga in Orangeville, soon had me at ease – courtesy of those cereal jingles and other playful tips on drumming basics. 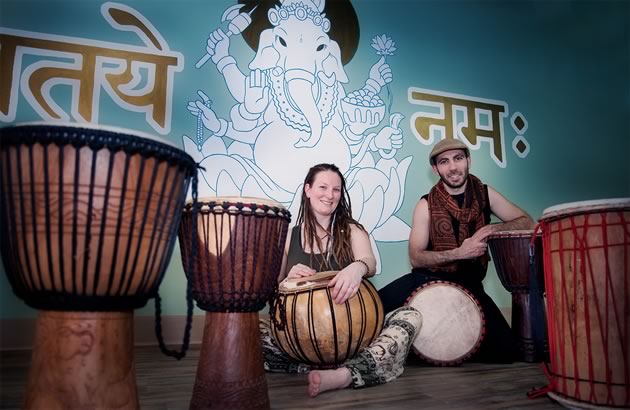 I had heard a lot about the benefits of drumming, which include decreasing stress and anxiety – it’s said to be more effective than Prozac. It seems the rhythmic beat on these most ancient of instruments, common to aboriginal cultures around the world, reaches deep back into the human psyche to retrieve something essential about ourselves and how we relate to others.

Certainly as the cacophony of contemporary life escalates exponentially, hand drumming has been embraced with increasing enthusiasm by Western culture, and not just among musicians.

One look at my Facebook feed makes it clear just how popular it has become. There are my friends, looking relaxed in drum circles or beating out rhythms at campfire singalongs, along with snaps of their kids on percussion instruments of every sort – all enjoying the very antithesis of the virtual world, spending time with others and sharing a love of music and rhythm.

I was game to give it a try.

“Drumming is awesome because anyone can do it – kids and adults alike,” says Jason. “In fact, the drummer’s oath, developed by Drum Café, is ‘If I can breathe, if my eyes blink and my heart beats, then I have rhythm.’” As a teenager Laurin played for Drum Café, an international drum troupe that takes drumming into corporate boardrooms, offering interactive performances as team-building, mind-clearing exercises.

Laurin and Jason teach drum sessions at their yoga studio along with a roster of rotating teachers. One of those teachers is Laurin’s father, Tom Wolf. He has been drumming for more than 40 years, and clearly passed on his love of music and rhythm to his daughter.

Laurin and Jason also perform as The Mantra Movement, with Laurin on Native American flute, Jason on didgeridoo, and both on drums. Their goal is to use sound, movement and deep vibrations to invoke healing and deeper connections, within oneself and with others. (You can sample their music at themantramovement.ca.)

“What I love about drumming is the peace it brings,” says Laurin, who previously suffered from migraines and panic attacks, and now also teaches a variety of yoga and meditation classes.

Back at the retreat there was no time to feel uneasy about banging out the wrong rhythm or note. The leaders easily introduce newcomers to the jembe, which is held between the knees, angled away from the body. Different types of strikes and their corresponding sounds are explained – the bass, tone and slap, all made with varying hand positions.

“In a group session it’s easy to forget being self-conscious because everyone is playing as one and you’re part of an entire experience,” says Jason. “That’s good because it allows participants to let loose the mind and play from the heart.”

Jason continues the techniques learned from his mentors Tom Wolf and local drum-maker Jamie Andrews, using catchy phrases to help instill the rhythm in students. These include jingles and sign-offs such as “Have a nice day.” Most important, though, is for participants get out of their heads (guilty as charged) and let their hands explore the different patterns and tone. Opportunities for solos are never forced, but if someone is inspired to belt out a catchy rhythm, it will be welcomed with big smiles and a supportive background drumbeat.

During a recent drop-in drum session at Kala, a nine-year-old leaned over mid-song to ask her mom, “Can I get my own drum?” It’s a question echoed by almost all jembe newbies. And the answer is a resounding yes – get your own drum. Jamie Andrews of Jembe Solutions is happy to help with that. His house is within spitting distance of the yoga studio and contains a studio for lessons as well as an entire floor dedicated to a workshop for building and repairing drums. 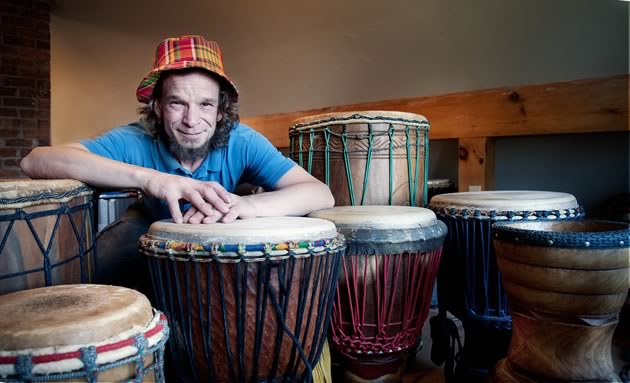 Drum-maker Jamie Andrews invites customers to try out various drums at his workshop because it’s important the character of the drum suits the drummer. Photo by Rosemary Hasner / Black Dog Creative Arts.

“It’s about finding the drum that works for you,” says Jamie. On my first visit I feel like I’ve stumbled into Harry Potter’s Diagon Alley to shop for a magic wand. As Jamie explains it, different people are drawn to different things in selecting their own jembe. For example, many vegans and vegetarians opt for a synthetic drum skin rather than animal hide. The type of wood used and the size are also important to the fit for each drummer. Jamie books personal interviews so you can try a variety of drums to find the one that best suits you.

In addition to being a talented drum-maker, Jamie can be found leading drum circles in schools through a Dufferin Arts Council program and elsewhere in the area, as well as participating in casual drumming get-togethers. They’re a great way to get out and connect with other drummers and perhaps even learn some neat new sounds.

Like Jamie, Matthew Fleming is an advocate for the power of percussion. He also visits school classrooms through the DAC program and particularly enjoys bringing music to kids via percussion, including drums, wood blocks and shakers. I was keen to talk to him because I felt sure my own school-age kids would be big fans of hand drumming – if it worked to manage my mood, chances are it would help them realize that entertainment could be found outside of video games.

“Playing percussion instruments is an activity that is good for everybody, including those with physical issues of all kinds,” confirms Matthew. “I can show kids how to do the simplest and most fun things with a drum, and everyone is comfortable, having a great time.” He adds, “I’ve learned as much from the kids as they’ve learned from me.” 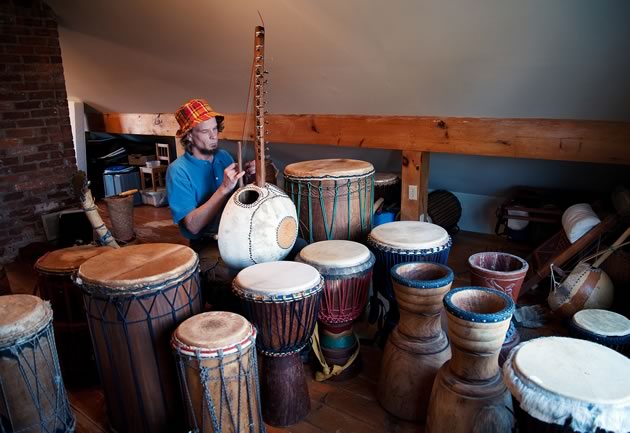 Jamie Andrews at work at his craft in his Orangeville studio. Photo by Rosemary Hasner / Black Dog Creative Arts.

Talk about learning – when that drum session at the retreat concluded, I wasn’t the only one who thought I’d received a powerful life lesson. I felt alive, happy and brimming with energy. In the aftermath, I find myself tapping out rhythms on the dining room table, or on the steering wheel at a red light. Rhythmic phrases echo in my mind like delightful earworms, and practice sessions at home range from five minutes while the kids are in the bath to an hour that whizzes by in a blur of exploration.

It turns out I shouldn’t have worried about what I looked or sounded like while learning to drum – as we all instinctively knew as toddlers banging on pots and pans, drumming is natural, joyful and just plain fun.