“Radulov! Radulov!” shouts a breathless but exultant 60-something guy, whom we know only as Johnny, as he pumps a gloved fist over his helmeted head. He has just scored a highlight-reel beauty on a jinking, rink-long rush and jokingly compares himself to the Russian-born superstar of the Montreal Canadiens (traded this year to the Dallas Stars).

Johnny may not make those inspired moves again all season, but who are we to argue. He gets whoops of appreciation and a hockey-player round of applause: stick heels hammering against the boards at the bench. “I love this game!” he grins.

“We” are Johnny and Billy, Donny, Kenny, Joey and G-Man, all of us 55-plus men – sometimes “plus” by a decade or more – with boys’ names for an hour and a half, three mornings a week. We play municipal seniors’ pickup hockey for the exercise, the banter, the camaraderie and the sheer joy of the game. And because we are Canadians. Old Canadians.

“My wife doesn’t get this,” a red-faced philosopher in a faded Flames’ jersey sighs and spits. “She just doesn’t understand why I do this. I play. I laugh. I get ragged on. I yell stupid stuff. Listen to these idiots! No one cares. I’m 12 years old again, playing ball hockey in my parents’ driveway. I love this! I love being a guy!”

It’s September, early enough that the leaves have yet to turn and the Leafs have yet to disappoint. Everyone is a season older, but a lazy summer has dulled memories. In our minds we are young and fleet and tireless.

This feeling will last one game – perhaps not even that – but for now, life feels good and hopeful and boundless. Mouldering gear has been pulled from basements, washed, aired in the August sunshine, folded neatly into cleaned bags and hoisted onto shoulders to head out to the garage or driveway to replace golf clubs in the trunks of cars and the backs of pickups.

Orangeville Parks and Recreation’s 55+ Shinny program, now in its fourth season, refers to hockey without referees, designated teams or skill qualifications. You show up, divide up, and play. It costs $5 a game, even cheaper if you spring for a season’s pass (usually mid-September to mid-April) – about $150, including HST, for Orangeville residents, and about $180 for satellite dwellers such as me. 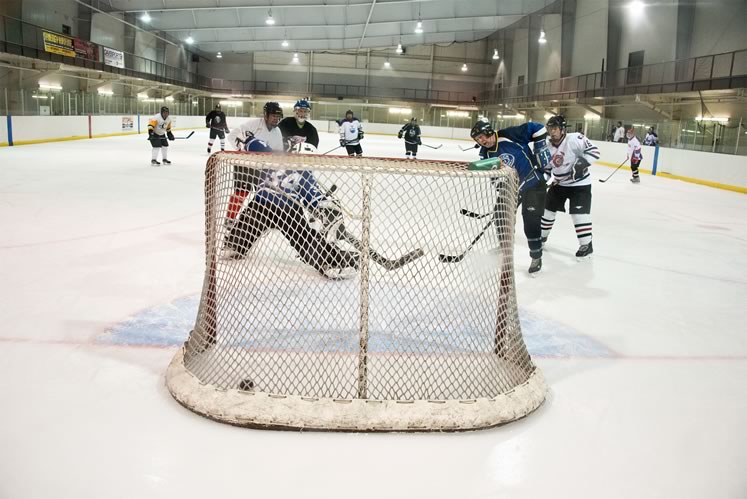 Three mornings a week in Orangeville, a group of never-say-die, hockey-mad men suit up in mismatched sweaters and play their hearts out. Photo by Pete Paterson.

Every year seniors’ shinny starts slowly. Until mid-October or later, when the golf season is in its final frosty stages, there are a lot of three-on-three contests, with gasping, red-faced, midgame breaks. But golf winds up, word gets out and friends call buddies who know someone who might come out, and numbers, regulars, accumulate. Goalies are always well-padded needles in haystacks, but for some games two might show up between the pipes, presenting much more of a challenge than the dangling plastic targets they replace. With goalies in nets, a real hockey game can break out.

Last year numbers swelled for a spell and some started bleating about not getting enough ice time, so Parks and Rec moved to limit the number to 20, first-come, first-served. But in reality, 20-plus rarely happens.

The woman at reception in Alder Recreation Centre gives a wave and a cheery “Good morning” as we enter, half-past-eightish on Mondays, Wednesdays and Fridays. Workdays. The game is for retirees bolstered by older shift workers and the un-, under- or self-employed. Games play out from 9 to 10:20 a.m. on the Alder Street rink, with a little warm-up beforehand. Some mornings, especially early in the season, it seems like a very long hour and change.

Acquaintances and teammates I know only by first name (rarely by last name or in such context as career, family or locale) enter the dressing room, rack their sticks, dump their bags, hang up their coats and strip. It is not a pretty sight. Bodies sag, bulge and crease. Hair is greying, thinning or absent – or has migrated to shoulders and back. Some knees and elbows might be wrapped, rubbed with liniment, or braced. I ask myself, “Who are all these dilapidated old guys? That’s not me, surely.”

The hockey gear we don is similarly well-used: mismatched hockey socks, shoulder pads dating from when Justin Trudeau’s dad was PM, jerseys in a smorgasbord of fading liveries from beer-league teams of yore – Atlantic Auto Body, Thackwray’s Home Hardware, Excelsior Hose Co., The Deck Pub and Grill. Sometimes even “hand-me-up” jerseys appear, from sons who have shelved the game for family life and maturity.

Teams are “lights” and “darks,” according to the hue of the jerseys. Most guys bring both shades, but after a few games, habits form and team cores become set. Irregulars will ask, “What jersey do you need me in?” If before or, infrequently, during a game, the teams are demonstrably unbalanced, alphas might put their heads together at centre ice and suggest, “Tony [or someone else], can you go dark?” No one hesitates to comply, but I’ll note whom I’ve been swapped for. The rule is unspoken, but we all know the score: set self aside – a little advantage for us, a little disadvantage (me) for them – in the cause of an even contest.

Though the range of skills runs from pretty-damn-good to me, there is no judgment or comment. We come, we play, we try. We all pay the same amount, and all skill levels are welcomed and encouraged. There is no discrimination. Everyone on his day, or even after a lucky deke or fortunate shot to a top corner, can get hoots, high fives, bum pats and an “Attaboy!” or “Way to go!” No one keeps score or bears grudges, and all adhere to the pickup credo: Last goal wins! I’ve been hearing that since my dad tied my skates. 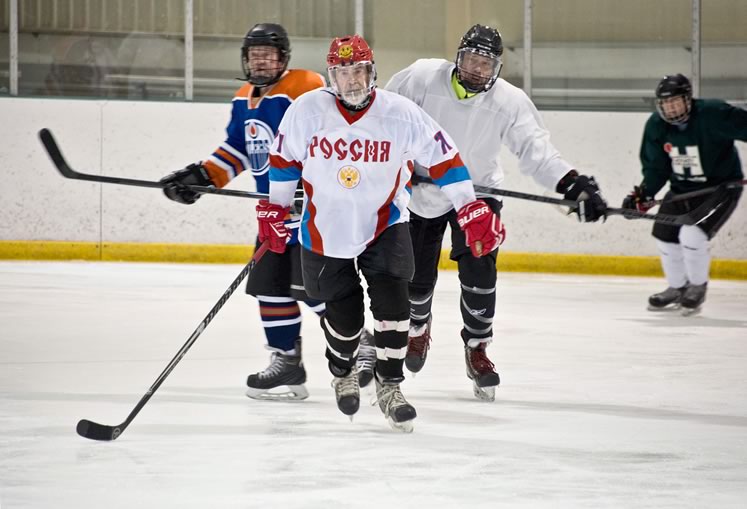 Entering the new year, there will be appreciable changes. A smattering of fresh, unsullied gear will appear: Boxing Day-bargain gloves, sticks or shin pads. Into January and February numbers might thin, until absentees return sporting Caribbean or Arizona tans, telling tall tales from the links or the casino.

An injury or two might occur over the course of a season. I’ve bruised ribs and broken a thumb, because I don’t pay enough attention to where I’m going. Nor do I heal as quickly as I once did. When someone does go down, action stops. Immediately. There is genuine concern and a chorus of “You okay?” Everyone wants everyone else to leave the rink as healthy as they arrived.

The games are non-contact with no slapshots permitted. Common sense and consensus say you don’t shoot into a crowd, but it is okay to blast away when you’re going in alone on a goalie. Most comply, and I know whose shots to jump away from. Let them score! No one is monitoring my plus-minus. I hope.

I played organized hockey as a boy for teams such as Baby Bunny Nuts and Pickin’ Chicken. My abiding childhood memories are of happily playing road hockey, all day, every day, in all seasons. I wasn’t very good then, and nothing has changed since. At my age I’m unlikely to get any better, though I still nurture hope.

In fact, none of us is improving, but even in decline, some of the old boys I play with and against are pretty good. When one of them slaloms by me, I want to call for a urine test or check his ID. Is this guy really 55-plus and making me look 80?

There is no age check, of course. Honour system. You show up, pay up, and play. Suiting up, no one appears to be an underage ringer. Out on the ice, where some use me for a pylon, I’m not so sure. But the dressing room afterwards confirms that a fast, talented winger is indeed in his paunchy dotage. I admire the good players. I study and attempt to emulate them, but reality and fatigue usually intrude.

Players have personalities set over a lifetime. There are the selfish ones (only a few) who hog the puck and seldom pass, seeking glory. There are the over-competitive sorts, often mild fellows off-ice, who will hack or lean too hard in the corners. My attitude is “Take it, if you want it so bad!” but anyone who is consistently rough faces group approbation. “Easy! It’s just a game” usually does it.

My favourites – everybody’s favourites – are the good players who don’t flaunt it. Those who play back, surveying, going easy, moving the puck forward and distributing perfect passes to the lesser lights who score easy goals in return for a smile, an appreciative nod or a glove bump. I’m that good player, when I dream. 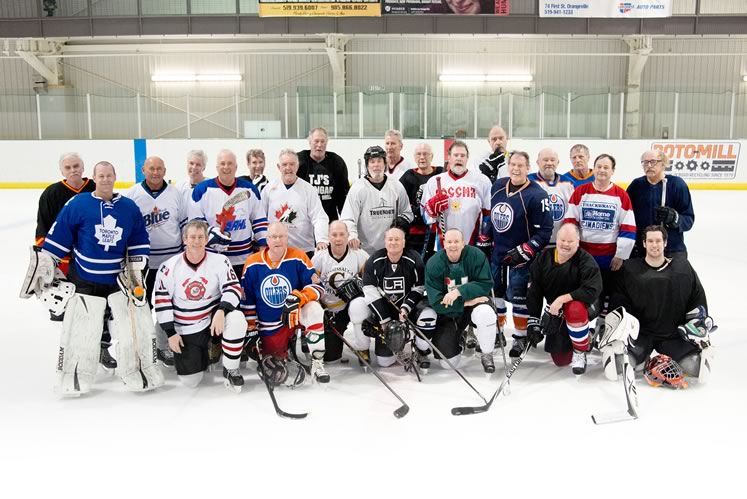 In 55-plus shinny, there are no refs, no coaches, no fans, no strategy. There are defibrillators, I believe. There are no set positions (you replace whoever comes off, do a shift and go to the end of the line on the bench), no criticisms, no demotions, no scores, no winners or losers – just like when we were boys playing in our parents’ driveway. And imagining we were Radulov.

Leaving the rink after a game, happy and tired, a bag of wet gear on our shoulders, getting on with our aging lives, all that is missing is our mom’s voice, floating over the front yards, calling us in for dinner. 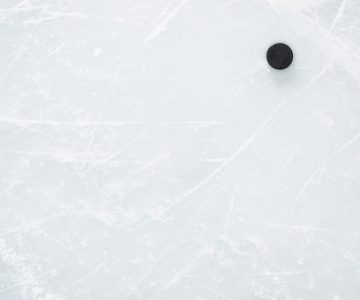 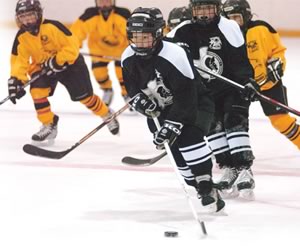 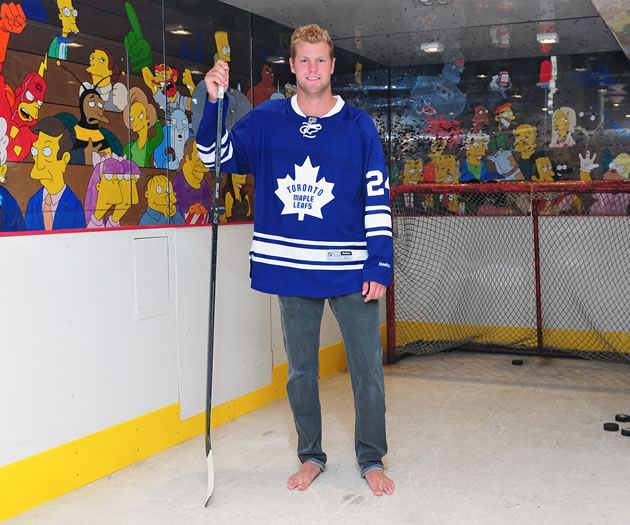