A Hug from the Nation

Quilts Of Valour – Dufferin: Some of our 2017 Local Heroes

On a Saturday morning in early November, members of Quilts of Valour – Dufferin were gathered at the Royal Canadian Legion hall in Shelburne. A couple of sewing machines were set up, and dozens of colourful, intricate quilts – more works of art than bed linen – were spread out on the tables around them. 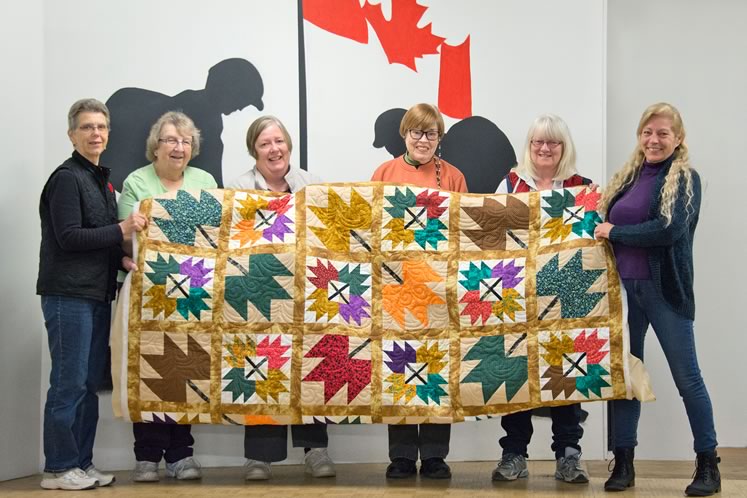 Group members were getting ready for an event. At the Orangeville Legion hall that evening, 14 quilts were presented to veterans. And over the next ten days, 16 more were presented at the Shelburne Legion and Dufferin Oaks Long Term Care Home.

Judy MacLeod, the group’s organizer, caught the sewing bug early. “I used to sew my Barbie outfits,” she says. Judy started holding monthly meetings at the Shelburne Legion in 2014, and so far the ten or so members have created and presented 75 to 80 quilts.

The Dufferin group is modelled on Quilts of Valour – Canada, which has provided quilts to nearly 10,000 injured members of the Canadian Armed Forces over the past five years. But this local group aims to reach all veterans in the county, not just those who have been injured.

Each quilt takes an average of 25 hours to create, though some of the more intricate ones can take twice that long. The patterns vary, but they often feature a maple leaf theme.

The group is trying to work from the oldest veterans to the youngest, with a particular focus on those from World War II. “We want to get to them before we lose them,” says Judy. Though the legions in Orangeville and Shelburne have been helpful in identifying recipients, not all vets are members.

Because the group is self-funded, members welcome gifts of quilting materials, not only fabric scraps, but also batting and backing materials. The quilts often go to vets who live in care facilities, where they are washed in industrial machines. So the quilts need to be sturdy, not only in construction but also the fabric used.

Members of the group are inspired by a wish to show their appreciation for the bravery and commitment of members of the Canadian Armed Forces, past and present. Judy’s grandfather and three great uncles all served in World War II, and all came home. She says each of the quilters has some kind of personal connection to the Armed Forces, though Diane Woodward points out her motivation is twofold: “I want to do it for the vets. And I love quilting.”

Chris Skalozub’s voice trembles when he talks about the quilt he received. The president of the Orangeville Legion, who served as a medic in the 1970s, says that with grandchildren in the house, his quilt will not go on a bed. Instead it will hang safely in a place of honour on a wall. “It’s an heirloom that will be passed down in the family,” he says. “It’s so beautiful. I look at it in awe.”