Sugaring off is a time-honoured ritual in the hills.

On some days at the end of winter, the sun radiates a certain warmth that takes the edge off chill winds. We humans feel it on our cheeks. Maple trees feel it in their roots. Deep under the frosty earth, the starch stored by the tree before the onset of winter starts changing to sugar, drawing water into the roots and beginning the flow of sap up to the leaf buds.

As the season wanes, steam starts to rise from the many sugar shacks scattered around these hills. Many of the shacks are old wooden sheds that look as if the maple trees grew up around them, but here and there are some newer buildings. All are decrittered, swept, cleaned and warmed up for a few weeks every spring. 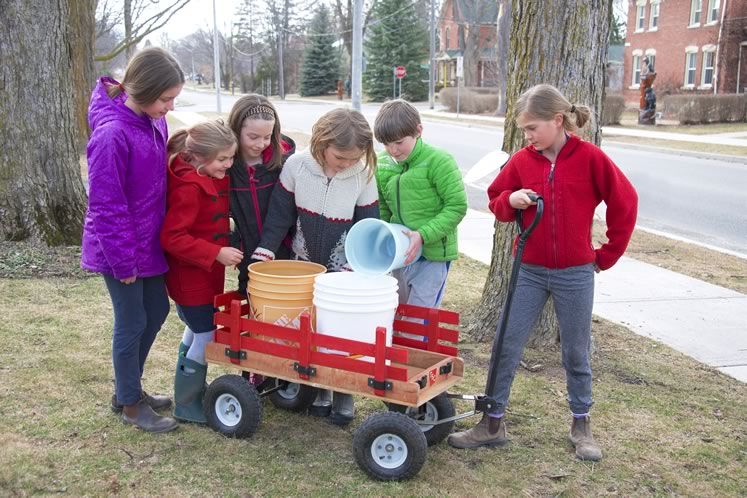 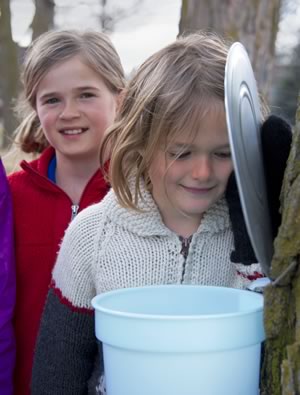 Sugaring off is a time-honoured ritual in the hills. Photo by Pete Paterson.

But not all sugaring off takes place in the bush. Sometimes this springtime ritual happens down the block. On Zina Street in Orangeville last spring, a kid carefully set a spile into the hole that Angus Murray had just drilled. As the sap splashed out at the last tap of the hammer, several other youngsters clustered around, catching drops on their fingers and tasting the faint sweetness. “That really got their attention,” said Angus, “the drilling and tasting. We went from tree to tree and they each got a turn.” In all they tapped a dozen trees in front yards up and down the street, ending up with about six litres of syrup that Angus’s family dubbed “Zina Gold.”

Like the kids, Angus lives on Zina. He’s an outdoor educator and guide, taking novices to challenging places such as Mount Kilimanjaro in Tanzania, Vinson Massif in Antarctica, the Nahanni River in the Northwest Territories and, this fall, Everest Base Camp in Nepal. “I’ve been doing it for 30 years,” he said, “primarily for Outward Bound Canada.”

The inspiration for the kids’ adven-ture on Zina Street began with the maple trees. At least 150 years old, some of the ancient stalwarts on the street had begun rotting. They had to come down, and that started Angus thinking. “The trees were tapped long ago by early settlers to the area,” he said. “They collected the sap, and when we make syrup today, it’s a direct connection to them and to the Indigenous people who had been tapping maple trees for thousands of years and taught the settlers how to do it.”

Last year was the first year for Angus’s project, and this year more neighbours were interested, so he planned more taps this spring. He was also looking for a better way to boil down the sap. “A pot on a propane burner in my driveway is not the most efficient system,” he laughed. “I’m looking for some kind of a finishing pan.” His search remains active and he hopes someone with an old pan no longer in use will donate it to the Zina Street project. 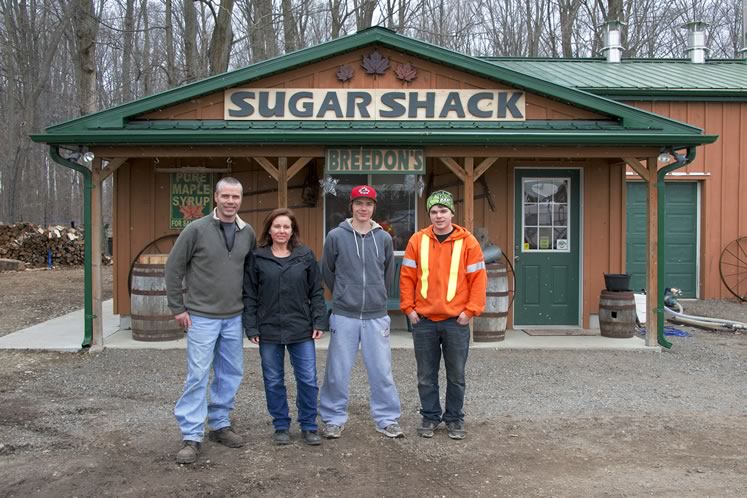 The Breedon family (left to right), Kent, Dawn and two of their four sons, Carson and Curtis, in front of the farm shop. Photo by Pete Paterson.

The evaporator at Breedon’s Maple Syrup near Loretto is a long way from a pot on a propane burner. Kent and Dawn Breedon started the family business on their farm in 1995 – and the operation is at the other end of the spectrum from the Zina Street efforts. Kent and Dawn, along with their four sons, Cameron, Collin, Curtis and Carson, tap more than 5,000 maple trees in the old woodlot on their own 50 acres and on another 30 rented acres. In the bush, a web of plastic tubing 65 kilometres long connects the taps either directly to the sugar shack or to sap collection tanks that are emptied regularly.

In the Breedons’ operation, sugar “shack” is a bit of a misnomer. Inside the building it’s all gleaming stainless steel, white tile and echoes. Kent explained that a two-step operation produces the syrup. “We start with reverse osmosis up there,” he said, pointing to a collection of tanks and pipes on a high shelf where the sap comes into the building. “It takes some of the water out and concentrates the sugar. That way we don’t have to do as much evaporation.” 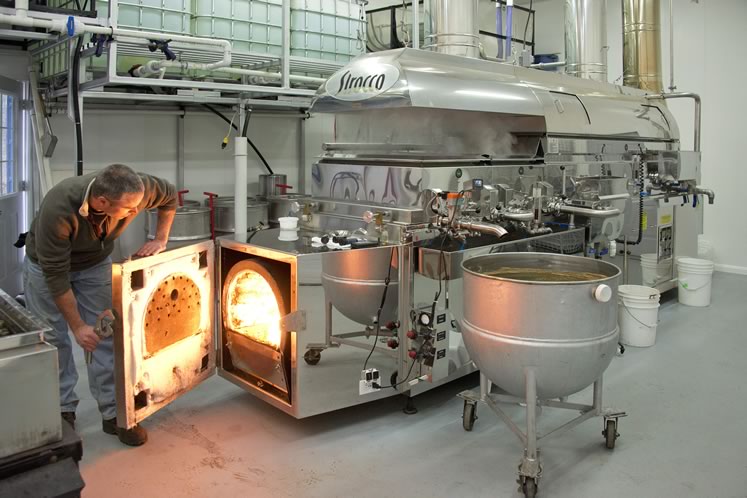 Kent checks the fire in the sleek commercial evaporator. Photo by Pete Paterson.

The evaporator itself all but sparkles in the white light. The name for this model is apt: Sirocco, the Mediterran-ean wind that can reach hurricane force. The sound from its firebox is like a strong, steady wind. “It’s fired with wood pellets,” said Kent, “auger-fed from one-ton bags in the other room.” A hood over the evaporating pan directs most of the steam up the chimney, but wisps curl up around its edges. It’s a lot of steam. Producing a litre of syrup requires boiling off about 40 litres of sap. When the liquid in the Sirocco reaches a temperature seven degrees above the boiling point of water, a valve opens and the syrup pours into a vat. From there, it’s filtered and bottled on a semi-automatic filling line. 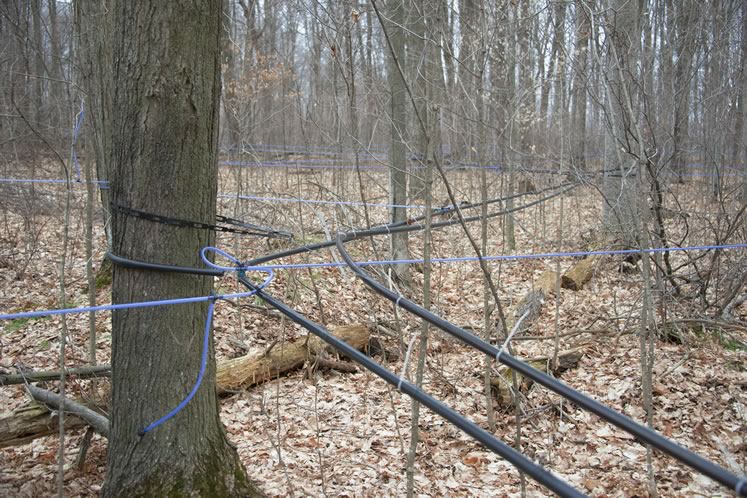 Sap from 5,000 trees flows into 65 kilometres of plastic tubing in the Breedons’ sugar bush. Photo by Pete Paterson.

A portion of the bottles goes to other retailers. “There are 28 stores nearby that we supply and that’s about it,” said Kent. But much of their product stocks the shelves of the Breedons’ on-farm shop, and they encourage visitors to their farm. “We have regular school tours, like the French class from Banting Memorial High School in Alliston, the Montessori school, and we have busloads of people in the fall who come up to see the colours or take the steam train in Tottenham.”

For tourists, the Breedons tap some trees the old-fashioned way, with spiles and buckets, and they have a cast-iron pot suspended over a fire to boil down the sap. People like to see the way things used to be and it tends to make them all the more impressed with the efficiencies of commercial production. 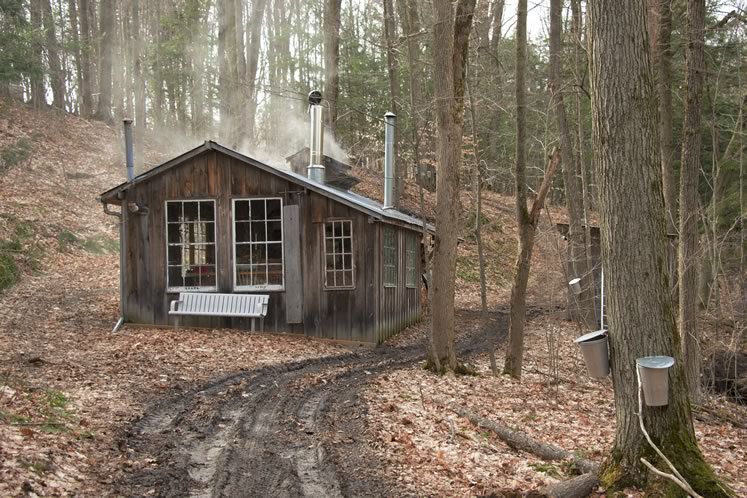 With spiles and buckets, Pete Paterson taps about 250 trees on his Caledon property, boiling the sap into syrup in his rustic sugar shack deep in the woods. Photo by Pete Paterson.

The maple bush behind Pete Paterson’s place in Caledon

Somewhere between the two extremes of the neighbourhood harvest on Zina Street and Breedons’ large operation is the sugaring off that takes place in the maple bush behind Pete Paterson’s place in Caledon. It started almost by accident. Pete, a long-time photographer for this magazine, explained: “In 1991  I drove to Ottawa, and at a flea market just west of the city, I found 20 old-fashioned cast-iron taps.”

The next spring, he figured he’d put his purchase to use and tapped the trees near his house, boiling down the sap on a propane burner. “I soon realized that I was spending $20 on propane for a litre of syrup, so I bought an old evaporator from a guy on Innis Lake Road that wasn’t being used anymore.” 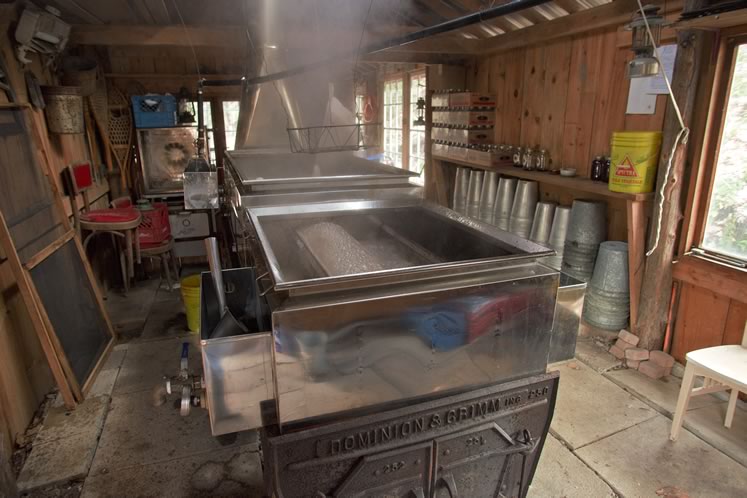 Somewhere between the two extremes of the neighbourhood harvest on Zina Street and Breedons’ large operation is the sugaring off that takes place in the maple bush behind Pete Paterson’s place in Caledon. Photo by Pete Paterson.

Three years later the evaporator sprang a leak, but by then Pete was committed, with a sugar shack in the woods, boxes of spiles and piles of buckets and lids. He bought a new evaporator and put it to work the following season.

The work actually begins long before the trees are tapped, and for the past few years, I’ve given Pete a hand now and then. In the summer and fall, we take down the standing dead trees, split and stack the wood near the sugar shack and let it dry till the sap starts running. “I’ll tap about 250 trees on average,” said Pete, “but I have gone as high as 450 and that’s a lot of work.” Other friends help too. Ideally, tapping is a three-person operation: one to drill the hole, the second to set the spile and the third to hang the bucket and lid.

If it’s sunny when the buckets go on, we can stand quietly in the woods and listen to the jingling music of sap dripping into empty buckets. Trudging through melting drifts to collect them when they’re full, slipping down hills and in muddy ruts, falling occasionally, is wet work, but we manage to keep the sap from spilling – most of the time.

I’m often soaked through when I go into the sugar shack to check the fire. As I swing open the cast-iron doors of the fire box, the heat warms my face and starts my pants steaming. I throw in a few chunks of wood, and in a few minutes the sap hits a furious boil in the evaporation pan, with the steam billowing over the pan, then rising up and out through open hatches in the roof.

After that most of the work is just waiting, feeding the fire when the boiling begins to slow, sitting and watching the billowing steam, trying not to look at the thermometer attached to the evaporator. It creeps up to 104C, then stays stuck at each of the next three degrees for a very long time. At 107C at last, there’s a flurry of activity – drawing off the syrup, pouring it through a filter, filling and sealing the jars. Then the evaporator fills with sap from the tank outdoors and the waiting begins again.

“Depending on the weather I can get a litre of syrup from each tap,” said Pete, “but as soon as the spring peepers start singing in the pond, that’s it for the season.” That’s when the temperature stays above freezing all night. The leaf buds begin to grow and the sap has an “off” taste.

Maple syrup is a delicious treat – some call it a superfood – but as far as I’m concerned just being out in the woods as the snow melts away, watching for and listening to the arrival of spring, collecting what nature provides – that’s the real enjoyment.

Spring is the sweet season in the hills, and everyone from local restaurants to conservation areas is in on the delicious act. 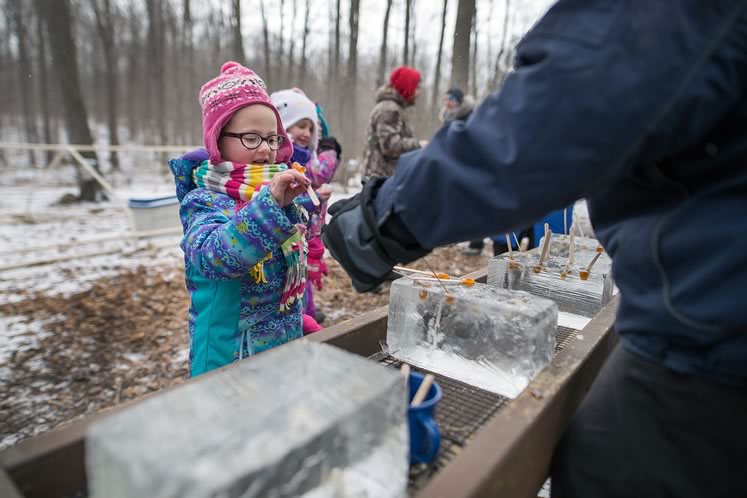 Catch some of the fun at the Sugarbush Maple Syrup Festival at two local conservation areas. Syrup-making demonstrations and lots of family-friendly activities take place at Island Lake and Terra Cotta Conservation Area into April. See details at maplesyrupfest.com.