If you want to try a plant-based diet, tap into the local vegan community for recipes, favourite restaurant meals and insider shopping tips.

When a stack of three fluffy, golden-brown pancakes arrives at the table at Deja Vu Diner with a heavenly waft of vanilla, it announces itself as a decadent breakfast treat. But these pancakes also happen to be entirely vegan, made without eggs or milk. And thanks to a spike in plant-based eating, they’re selling like, well, hotcakes. 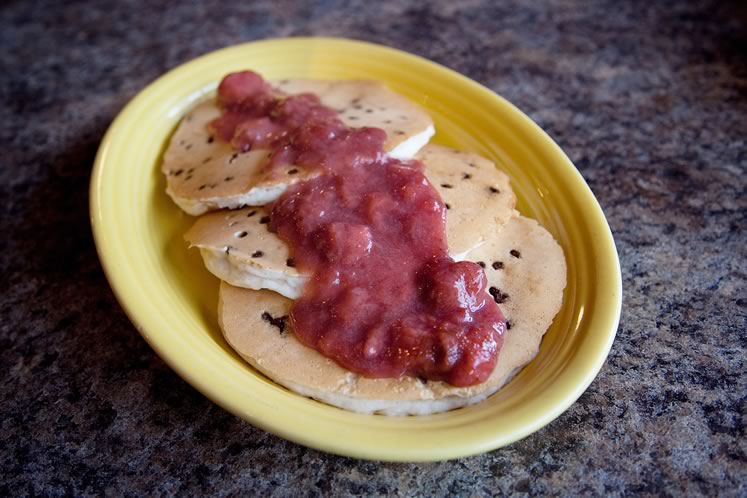 While this old-school diner in Orangeville’s west end still serves plenty of sausages, steak and bacon strips at breakfast, owner Jennifer Betz knows firsthand how challenging it can be for a group to dine out when someone is skipping animal products. She wanted to make it easier for them.

“My daughter is a vegan, and it was often hard for restaurants to accommodate her in the past,” Jennifer says of Hannah, 18. “Sometimes our only options were to leave or for her not to eat.” So when Jennifer took over the diner, she wanted to have at least one vegan item on the menu.

Water and vegetable oil replace the usual milk and eggs in her pancake recipe, along with real vanilla for a touch of richness. Beyond maple syrup, the optional vegan pancake toppings include non-dairy chocolate chips and homemade strawberry or blueberry topping – essentially vegan jam made without gelatin (which is derived from animal collagen). Jennifer offers soy milk to add to hot beverages and has recently starting selling the Beyond Burger – a choice she says makes her daughter extremely excited.

If the Beyond Burger sounds familiar, it’s because even fast food chain A&W has added it to its menu. The patty is made by California company Beyond Meat with pea protein isolate, coconut oil and beets (for colour) to meet the growing demand for great tasting vegan fare.

A recent Dalhousie University study found the number of vegetarians in Canada has risen to 2.3 million from 900,000 15 years ago. There are also 850,000 vegans – who in addition to avoiding meat also eschew dairy, eggs and honey (they may also avoid leather and other animal products in their wardrobes and homes). Together, the number of vegetarians and vegans accounts for close to 10 per cent of the population – even in rural communities such as Headwaters, where cattle, dairy and poultry farms dot the landscape.

Many of the topics author Frances Moore Lappé explored in her classic 1971 book Diet for a Small Planet remain relevant, including the negative impact of meat production on the environment and the possible benefits to both the environment and world hunger if we gave up meat. Recent studies reveal more than 80 per cent of the world’s farmland is used for livestock, which provides just 18 per cent of global food calories and 37 per cent of its protein. And scientists say even the most sustainable meat and dairy farms still do greater environmental damage than any plant production.

More recently the health benefits of plant-based eating, including a lower risk of heart disease and stroke, have boosted the practice. What was once considered counterculture or hippie is now embraced as “clean eating” by everyone from Super Bowl-winning quarterbacks to movie stars. Our era’s veggie guru is author Michael Pollan. In his 2008 book In Defense of Food, he refined some of Lappé’s ideas into a new mantra: “Eat food. Not too much. Mostly plants.”

The authors of the new Canada’s Food Guide, released by Health Canada in February, are likewise urging Canadians to fill up half their diet – illustrated by a dinner plate graphic – with vegetables and fruit. They also ditched the word meat as a category header, in favour of “protein foods,” promoting nuts, legumes and tofu alongside beef, chicken and meat products.

Orangeville yoga studio owners Jason Maraschiello and Laurin Wolf are dedicated vegans who amplify their choices over social media. The couple started the Orangeville and area vegan Facebook group almost three years ago. They had been part of a similar group in Guelph and wanted something comparable after they moved to Erin. “Starting this online group was a way to cultivate awareness of vegan options in our expanding community,” Jason says, adding he’d even love to see “vegan ribs” offered at local Ribfests alongside the main attraction one day.

The group hosts occasional vegan potlucks and has become best known among vegans and the vegan-curious for sharing recipes, vegan ingredient finds and tips on vegan-friendly local menus (favourites include Orangeville’s Pia’s on Broadway, RJ’s Taste of Asia and Euphoria, and Mono’s Mrs. D Jerk Roti).

Sharah Mooy from East Garafraxa is another convert who brings followers into her kitchen through social media. In response to interest from friends and family, Sharah started the Instagram page @sharing.wellness a little over a year ago after four years of practising vegetarianism and two years eating a plant-based diet. (She, like many others, leans towards the “plant-based” label rather than “vegan” which is considered more stringent.) She routinely uploads recipes, reviews of restaurant meals – she’s a big fan of the veggie burger at Orangeville’s Forage restaurant – and insider discoveries such as the best alternatives to popular kids’ snacks. (Her pro tip: Try the vegan cream “cheeze” from Humble Seedz.) 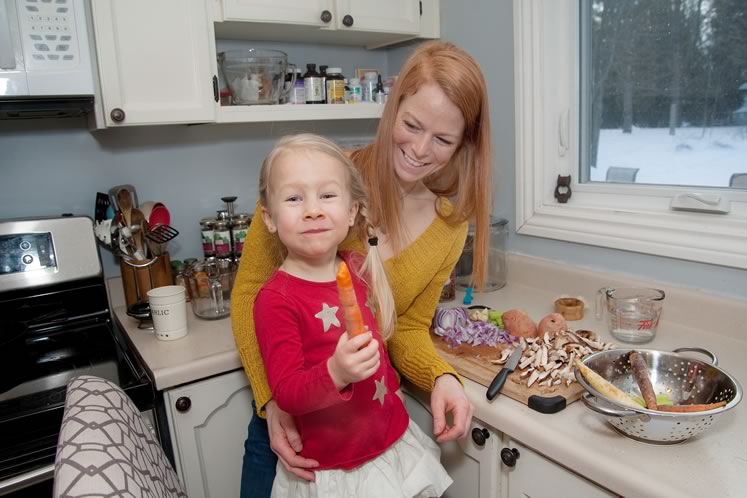 Sharah Mooy and her daughter Elia, 3, prep a plant-based dinner at their home in East Garafraxa. Sharah, who is studying to become a holistic nutritionist, shares vegan recipes and restaurant tips on her Instagram feed. Photo by Rosemary Hasner / Black Dog Creative Arts.

The reasoning behind Sharah’s choice covers all the bases: animal rights, the environment and her family’s health. The move to veganism had such an impact on the mother of two that she changed career streams from finance to studying holistic nutrition. However, she realizes not everyone shares her zeal. “What I choose isn’t for everyone – what works for one doesn’t for all,” she admits. “I also talk about balance, and starting to make a change by slowly cutting out animal products.”

The Meatless Mondays trend is an easy place to start, she says. Trying dairy-free alternatives to see how they sit with your family’s tummies and consciences is another. Sampling vegan baked goods or prepared frozen meals is a simple way to test the waters.

Like Sharah, Mono resident Liz Glenday also opts for “plant-based” to describe her diet. “I don’t call myself a vegan,” says Liz. A fitness instructor who makes handmade items under her BusyLizzy Fitness label, she says she’s been making the shift gradually over 30 years. “I’m thrilled I’m decreasing my impact on animals, but as I eat the occasional egg – for example, in a baked good offered in someone’s home – I’m not a true vegan. But I am comfortable with my choices, the majority of which are vegan.”

Liz cooks a lot at home, but she and her family don’t find dining out a challenge. “Servers get to know me at our favourite restaurants,” she says. “They tell me if there are animal products in a dish, or offer to make my half of a shared appetizer vegan – it’s really considerate.”

Others have tapped into an aspect of veganism that could only happen in the country – rescuing animals from the food supply chain. Ali and Faith Bisram run the Green Living Organic Farm Sanctuary in East Garafraxa. Faith’s turn to veganism came about 18 months after Ali’s, all because of a visit to an animal sanctuary before they owned one. “I remember the first time Faith held a chicken, and then we stopped for dinner on our way home and she couldn’t order the chicken because it wasn’t just a meal anymore – it was Rita,” says Ali. 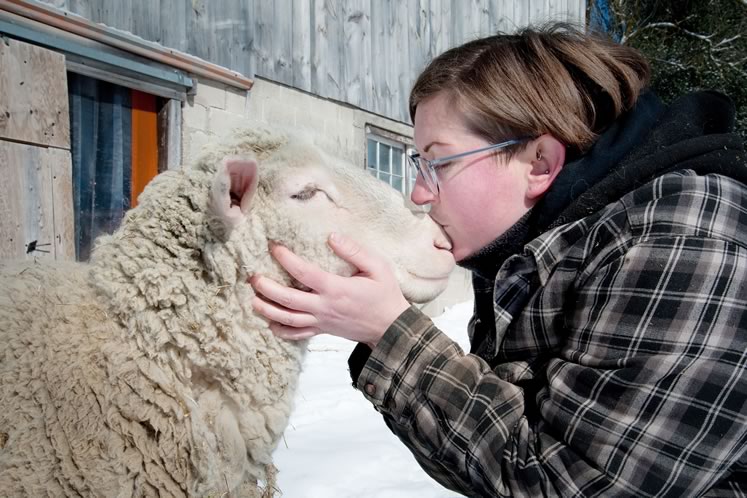 Ali Bisram nuzzles one of the rescued sheep she and her partner Faith care for at their Green Living Organic Farm Sanctuary. Photo by Rosemary Hasner / Black Dog Creative Arts.

The couple cares for 30 rescue animals, a modest number in the sanctuary world. “We are limiting our intakes to better focus on the needs of our senior and special needs residents,” says Ali.

The pair hosted an informal “Veg Fest” at the farm with vendors and members of the Orangeville-area vegan Facebook group two summers ago. Growing and selling organic produce helps offset costs, and their future dreams include offering horticultural therapy. For now they still hold day jobs in municipal government, but they welcome weekend visitors and volunteers, and they are planning a 20th birthday party in May for Cocoa, one of their beloved cows – complete with vegan cake, no doubt.

Headwaters may not yet have a critical mass of entirely vegan restaurants or shops, but it is already home to a dedicated community of people pursuing their beliefs with passion – which is a powerful place to start. As Sharah puts it, “For me, it comes down to being passionate in a constructive way. You can’t control the outcome of everything, but you do control what you eat.”

Add a few plant-based bites to your plate with these local options.
Do you know another must-try? Let us know and share your favourites in the comments below.

Deja Vu Diner | Orangeville
A traditional menu makes room for vegan pancakes, the Beyond Burger and other vegan hits.

The Busholme | Erin
Past menu wins include tofu tacos and Thai peanut tempeh in a quinoa Bowl or sandwich, and all their soups are vegan. Check Facebook for dedicated vegan menu nights.

Fionn MacCool’s | Orangeville
The pub chain has an entire vegetarian section on their menu, some of which can be made vegan. Think crispy cauliflower and whole grain bowls.

Healthy Cravings Holistic Kitchen | Shelburne
Yes, there’s more than one Buddha Bowl outside the GTA, along with a tofu scramble or raw vegan wrap.

Viki’s Vegan Takeaway | Mulmur
Viki Reynolds of Mulmur’s Not So Hollow native plant farm offers vegan, gluten-free dishes such as cassoulet, spanakopita and masala dosa, along with desserts and salads. She opens for the season May 4.

Janice Quirt is a freelance writer who lives in Orangeville.
Show 2 Comments