This serendipitous meeting with a near-sighted beaver was my favorite type of wildlife encounter!

Beavers are amazing animals. They cut down trees. With their teeth! They construct dams that hold back millions of litres of water and build lodges that keep them cozy in the harshest of winters. They excavate canals for safe passage through their territories. I could go on …

But for all the physical and mental abilities that make these astonishing feats possible, know that they are among the most myopic of animals. Rodent Mr. Magoos. I was reminded of this recently when I kayaked beside a swimming beaver on the Grand River.

I could almost reach out with my paddle and touch it. I was expecting at any moment that the beaver would slap its tail on the water and descend into the depths.  But no, it paddled along, unhurried, unconcerned, blithely unaware of my presence.

Soon it clambered up the bank, sat down and began grooming itself. In my kayak, only a few metres away, and in full view, I held my breath. After anointing itself with oil from a gland at the base of its tail, it began to feed on the lush streamside grass.

As it ate, I became aware of a deer hiding in a thicket behind the beaver. The deer, unlike the beaver, knew that a potentially dangerous human being lurked just offshore. It “sneezed” several times, as deer do when frightened. 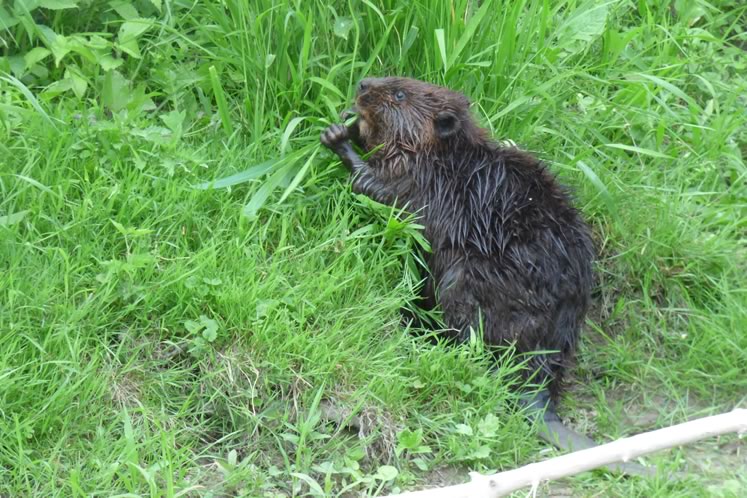 And then a remarkable thing happened. The beaver stopped feeding and remained still, likely trying to determine the source of the deer’s unease. Intriguingly, this means that beavers probably understand the alarm calls of deer.

Soon though, the beaver resumed its feeding and then casually slipped back into the river.

I drifted downstream. This serendipitous meeting with a near-sighted beaver was my favorite type of wildlife encounter: an animal unaware of my presence and thus unafraid, allowing delightful glimpses of natural behaviour.

Scratching an itch and waterproofing fur with oil from a gland near the base of its tail.

Reacting to the alarm call of a deer.

Eating grass on the river bank.

Back to the river.