How local growers are tapping a surging demand for the tiny, tasty stems that pack a nutritional punch.

*Editor’s note: This story was written before the fallout of the coronavirus hit our community. Many of the businesses and organizations mentioned here may be temporarily closed or offering alternative customer service options.

For a window into just how a trendy food can work its way into the mainstream, look no further than the tale of one of Headwaters’ newest crops – microgreens. Sure, you’ll find the lacy, crunchy greens at both earthy farmers’ market stands and fine restaurant menus, but you’ll also find them at everyday grocery stores and inside the bun of a classic burger at local mainstay Champ Burger in Primrose.

Those burger toppings are grown a few miles away at Mansfield’s Big Thunder Farms. Thanks to year-round availability, nutritional trends and straight-up visual appeal, enthusiasm for early-stage pea shoots, radishes, arugula and other greens harvested when they’re just days old is growing rapidly. They are a compact, reliable crop in many experimental vertical farming projects and at innovative university agriculture programs across the country. While Statistics Canada has agricultural data for microgreens only from 2017 – and they remain a sliver of a greenhouse produce market dominated by tomatoes, peppers and cucumbers – farmers reported increasing their yield to 919 metric tonnes in 2018 from 164 metric tonnes the year before. 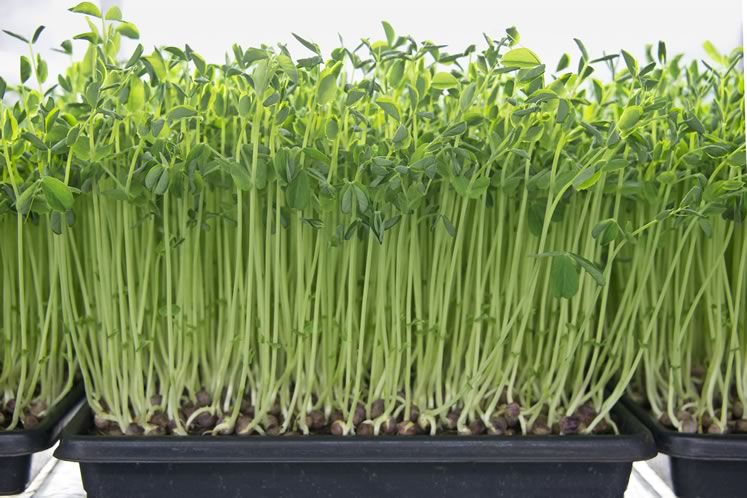 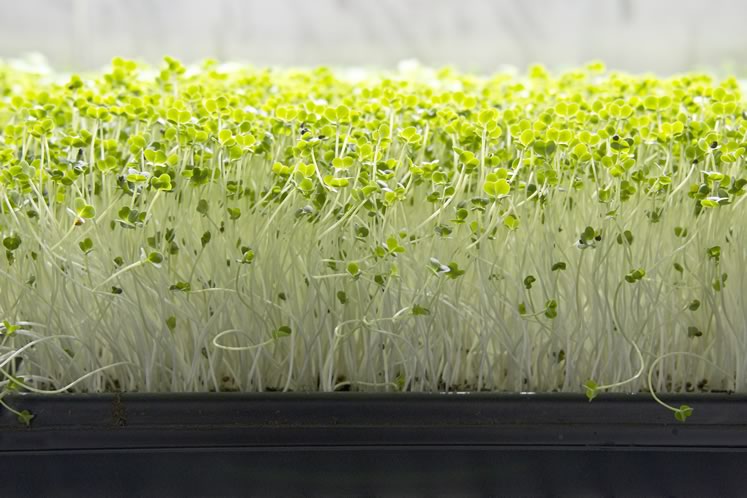 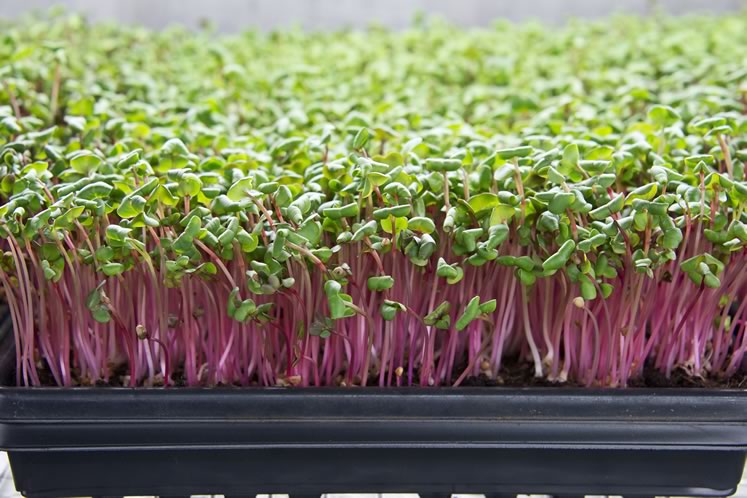 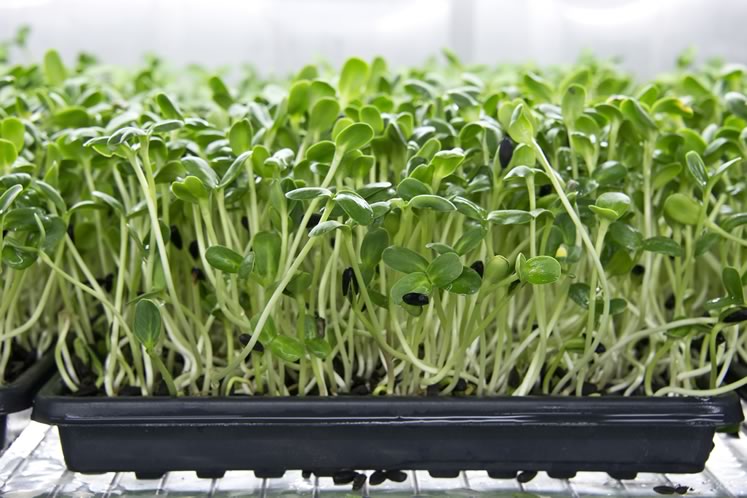 Popularized by California chefs in the 1980s as a trendy health food, microgreens have always been a niche product (not to be confused with sprouts, which are the very first stage of growth before any leaves emerge, and eaten with their seed still attached). But they may one day be a staple, especially if local growers – including Farmstead Fresh near Hillsburgh, Mono’s Am Braigh Farm, Thompson Acres in Grand Valley and Big Thunder Farms in Mansfield – have anything to say about it.

Unlike outdoor crops, microgreens can be grown indoors year-round with basic equipment: shelves, lights and soil. And they’re efficient. Microgreens take eight to 14 days to mature. Seeds are sprouted or germinated in soil trays and then grown until they reach the cotyledon stage, which is when the tiny pair of leaves that emerge from the seed before the first set of full leaves appear. Microgreens are cut and bagged when they are about two to four inches high. Then the whole process begins again.

Microgreens are the only crop Marcel Pijper and Josh Scheerer grow at Farmstead Fresh (formerly Nature’s Nurturing), their year-round organic business near Hillsburgh. They currently grow sunflower, pea shoot, broccoli and radish greens (as well as wheatgrass, but only for juicing) 365 days a year in five 8-by-40-foot insulated shipping containers, where they can control the temperature, humidity, lighting and watering.

“Being on top of all the different stages of production isn’t for everybody, but we both enjoy it,” Marcel says. “There is nothing better than to see a beautiful tray of microgreens on harvest day, knowing that you’ve grown those with your own labour.” 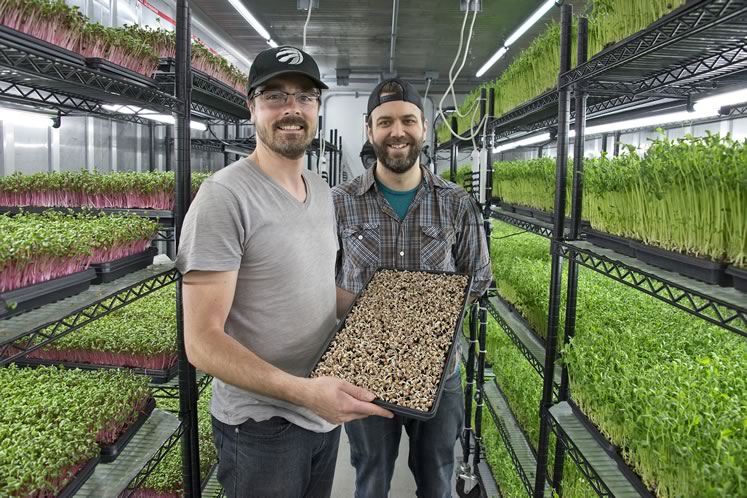 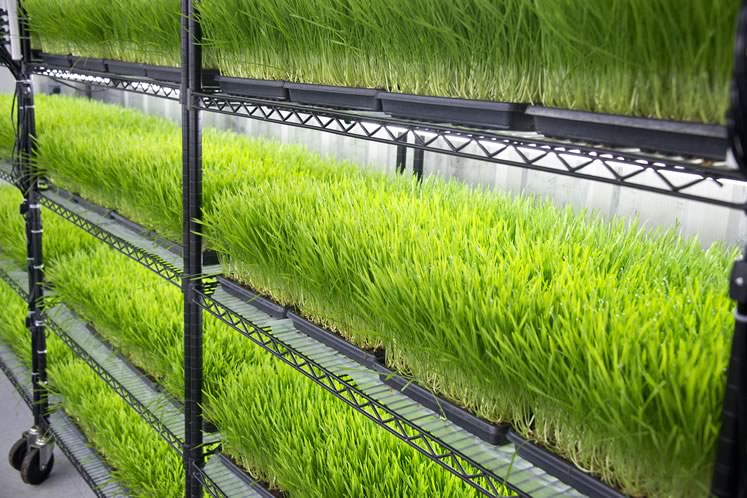 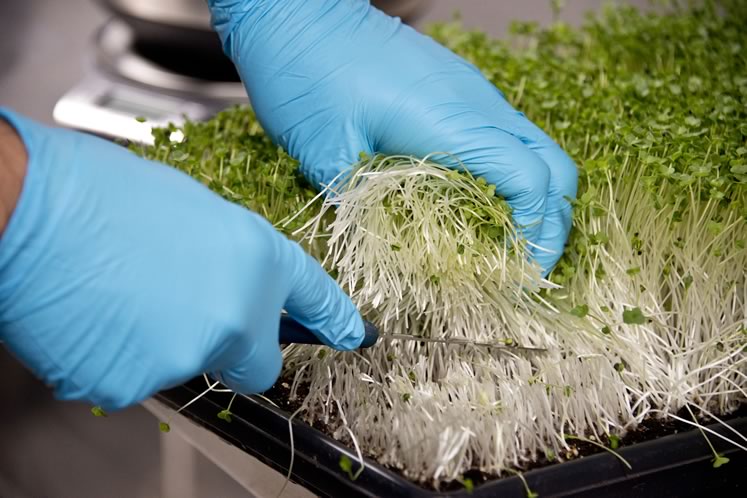 What’s more, the rapid seed-to-sale time means they can adjust to demand and feedback quickly and, for instance, plant more trays of a variety with the best sales. Since becoming Farmstead Fresh in 2019, the pair – they live together with their families on the farm – now focuses on wholesale customers, producing 8.5 tonnes of microgreens last year.

They mostly sell to independent grocery and health food stores in the GTA (including the two Big Carrot locations) and locally to Harmony Whole Foods Market in Orangeville, Foodland in Hillsburgh and Heatherlea Farm Shoppe near Belfountain. They also supply several local restaurants, as well as Bio Raw, a Toronto-based company that uses microgreens in prepackaged vegan salads.

Marcel says their busy season starts in the clean-eating month of January and tapers as fresh local produce starts to appear in June.

Local farm gate and CSA producers are tapping into cycles particular to their markets. In Mono, Jamie Richards of Am Braigh Farm has been leaning on microgreens as a fresh greens bridge during the winter months for about 10 years now, producing about 4.5 kilograms a week. At his farm gate shop you’ll find a mild brassica mix and spicier radish and wasabi varieties, along with pea and sunflower shoots and wheatgrass. “In addition to being a great garnish or salad, microgreens and shoots can sub in for a vegetable when favourites like broccoli and cauliflower aren’t in season,” he says.

Likewise, Stacy and Trevor Thompson of Grand Valley’s Thompson Acres started to offer the diminutive salad greens in their CSA baskets in 2016 because the crop can be started early in the traditional growing season – and because the couple appreciated their nutritional benefits.

The visual appeal of microgreens’ beautiful hues and delicate leaflets are part of the allure as well, says Stacy, who adds them to salads, stir-fries, soups and sandwiches – or eats them all on their own.

“Our kids, ages 12 and 13, take them in their lunch to school,” she says. “At first they were a little hesitant but they are used to trying everything we grow or raise.” Stacy is partial to sunflower microgreens, Trevor likes spicy arugula and the kids enjoy the milder pea microgreens.

How much they produce depends on the time of year. During the CSA months of June through October, they might grow about a dozen 21-by-11-inch trays at a time (every two to three weeks) for about 20 weekly customers. During the winter months the lucky Thompson family consumes one or two trays of their own microgreens every few weeks.

Jonathan and Sarah McCausland of Mansfield’s Big Thunder Farms came to growing microgreens for personal health reasons – which eventually inspired them to shift their whole organic farming business toward the juicy stalks. About five years ago Sarah was involved in a head-on collision, which affected the use of her right arm. Prior to the accident Jonathan and Sarah, both vegetarians, took high-quality supplements to round out their diets, but with Sarah, a teacher, not working, they needed a more affordable option. Thankfully taste was no issue.

“I still remember the first microgreen I ever tried – a tiny fuchsia beet, and the taste was absolutely phenomenal!” recalls Jonathan. “We started eating pounds and pounds of microgreens, like we were horses eating hay.”

Coming from a family of produce growers and retailers, Jonathan found it easy to set up a simple 1,200-square-foot area at home with a vertical shelving system in which he can irrigate the microgreens from below. A year later he started selling microgreens at the Shelburne and Mulmur farmers’ markets and customers started buying them religiously – some stocking up on pounds upon pounds for health reasons, like the local doctor who has been a loyal customer for several years. Other patrons ask for more obscure varieties not typically found in grocery stores or restaurants, such as flax or black seed micros. 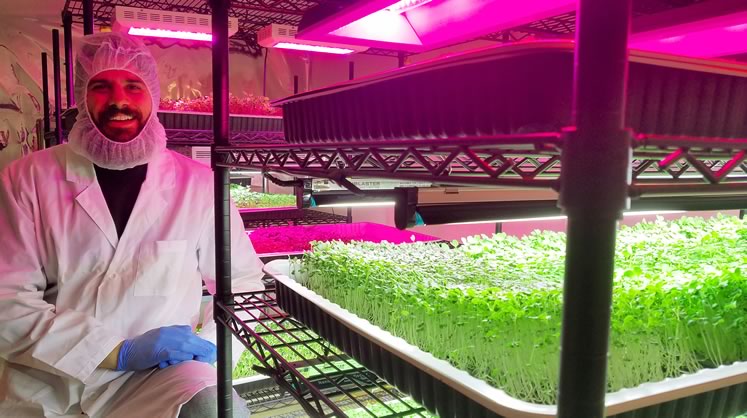 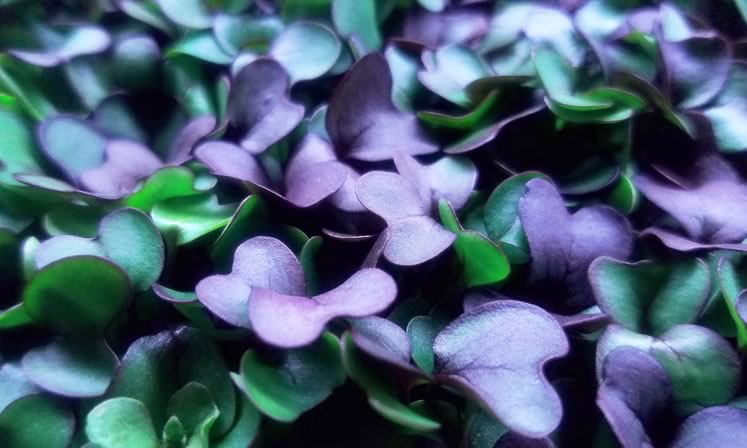 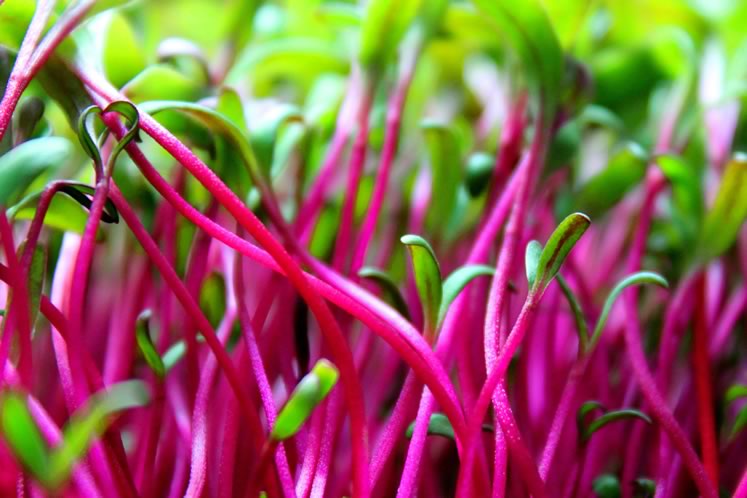 While they still take special orders, Big Thunder Farms now focuses on wholesale, retail and restaurant clients instead of farmers’ markets. Sarah is back teaching and Jonathan juggles growing, packaging and delivering microgreens with taking care of their four-year-old daughter. He grows hundreds of pounds of microgreens each month, and says he has never met an order he couldn’t fill.

One steady order has been the Shelburne No Frills. From the beginning, the store has championed Jonathan and Sarah’s food philosophy, even after a change in ownership. “We love working with them,” says Jonathan. “We all want people to have access to microgreens who typically would not – at a reasonable cost.” Jonathan also encourages people to grow their own, even in a basement with some lights or on a sunny windowsill.

Michael Paparamborda, a holistic nutritionist-in-training, is making the most of this ready availability of local microgreens in his year-old Orangeville practice, The Holistic Maple. He includes them in many of his clients’ daily nutritional plans. “They’re highly nutritious and people don’t need to eat a large volume to get the benefits,” says Michael, adding that diets high in plant foods like microgreens have been shown to reduce certain heart disease markers.

He prefers to eat microgreens raw, adding them to smoothies and veggie dips and topping cooked foods with them as hardworking garnishes. (One of his favourite recipes is sesame maple Brussels sprouts with microgreens.)

No wonder Michael is smitten. This nutrient-dense food has been found to impart four to 40 times more vitamins and carotenoids than the mature plants, according to a 2012 USDA study that tested 25 varieties. To put that into perspective, a quarter cup of broccoli microgreens is equivalent to two heads of broccoli. (Of course, there are other great reasons, including fibre content, to eat the fully grown version.)

If you’ve eaten out in Headwaters recently, you’ve likely encountered local microgreens on your plate – where all that matters is taste. Farmstead Fresh supplies Forage, Rustik and Steakhouse 63 in Orangeville, and Ray’s 3rd Generation Bistro Bakery in Alton. Big Thunder Farm’s microgreens have done turns at Mono Cliffs Inn in Mono, Terra Nova Public House in Mulmur, and Healthy Cravings Holistic Kitchen and Beyond the Gate in Shelburne – and they’ve been adding crunch to Champ Burgers for about three years now.

“When I started growing them, most people hadn’t heard of them,” says Big Thunder’s Jonathan, clearly pleased at the breadth of customers he’s reaching.

Chef Freddy Chartier of Beyond the Gate especially loves deeply hued varieties such as purple radish and purple basil. He enjoys how a variety such as micro radish adds a mustard bite, and he seeks out yellow stalks of micro corn for a hit of colour.

“In France, we always put herbs such as chives, chervil, basil and tarragon in a salad,” he says. “I like to switch in microgreens instead, like micro broccoli. Or make a tomato and mozzarella salad with micro basil – delicious!”

You could try to grow greens outdoors, but Stacy Thompson of Thompson Acres warns that even if animals don’t munch on them, they could easily destroy a crop of the delicate morsels just by walking through them. She adds that it’s a nuisance to have to wash and dry tiny greens that have been splattered with soil from rain or watering. To go the indoor route, you’ll need growing lights or a sunny window area, trays, soil and seeds.

Here’s how to do it: