Audiobooks and podcasts have produced a resurgence in oral storytelling, but for the Dufferin Circle of Storytellers the ancient art never went away.

*Editor’s note: This story was written before the fallout of the coronavirus hit our community. Many of the businesses and organizations mentioned here may be temporarily closed or offering alternative customer service options.

Storyteller Dick Byford and I were sitting in pews bathed in the pale pastels cast by the warm October light streaming through the Gothic windows of the historic Corbetton Church at the Museum of Dufferin. Dick and I were involved in a conversation. A conversation. Not a story.

“Although I’m flexible,” said Dick, “a story told is a path you want to go down. A conversation can go anywhere.”

A story has a beginning, a middle and an end, and storytelling is an oral art. Storytellers speaking to listeners around a campfire or dinner table, or from a stage, as Dick was about to do, craft their words carefully, controlling where the images, insights and emotions inspired by those words will take their audience.

“I love to read, but hearing a story told and reading it are worlds apart,” added Dick. “The spoken word, the inflections, can develop more emotion than the written one. It’s the difference between sending a girl a note saying ‘I love you’ and telling her.”

Seventy or so souls spent the afternoon in the church raptly listening to stories. The event marked the 25th anniversary of the Dufferin Circle of Storytellers, and engaging tales from the mundane to the magnificent filled the church’s high blue vault and the hearts and imaginations of those below. This is what well-told stories do, said Nancy Woods, the group’s founder.

Nancy retired to Mulmur after a career as an English teacher – and storyteller – in Toronto schools. “There is something captivating in someone telling you a story,” she said. “It puts you in listening mode. Listening is an endangered activity. Students needed help in the discipline.”

She assumed there would be storytellers in these hills, and she was right. The group “just sort of gathered,” she said. It was 1994. The members – currently about 15 – began meeting monthly and decided to give themselves a name. “I know I really wanted to include ‘circle,’” Nancy said.

Retired children’s entertainer Eric Nagler of Mulmur is thoughtful and quietly passionate about the storyteller’s art. It is an ancient one that crosses cultures and itinerant storytellers were the original entertainers, valued repositories of ancient tales. “The storyteller was the answer to questions of puzzlement,” said Eric. “Why does the sun rise? Why are there stripes on a chipmunk’s back? People knew how to listen and had a responsibility to pass it on.”

“A group feels the storyteller is the centre of the event, but actually we are creating something between us,” he added. “The storyteller is just the facilitator. Honesty. Express your heart. Words are our vehicle for having a shared experience together.”

Where do stories come from? From anywhere and everywhere. From personal experience, family history, observed scenarios, overheard anecdotes. They can be true, pure fiction, or lifted from a favourite author’s canon.

Orangeville’s Dick Byford, also a retired teacher, likes to quote the words of writer Thomas King: “We’re all stories.” For Dick, this means that everyone’s life is a story, and he loves to hear – and tell – people’s tales. In fact, he is a walking repository of tales, from the adult fiction of Roald Dahl, to the Canadian tall tales of lumberjack “Big Joe Mufferaw,” to personal stories, such as his queue-for-hours-for-standing-room-only passion for the Rocket Richard-era Montreal Canadiens.

For the anniversary event Dick chose a story he called “Getting to Know You.” With permission from the woman who lived the story, he touchingly related the tale of her journey to Europe to learn about a fellow known only as “Guy, the Canadian,” who was “a superb manipulator of dynamite.” Executed by the Nazis, Guy was someone the woman had no recollection of as a man, as a hero – or as her father. Dick ended the story by crafting an image of the woman lying on the floor of the cell where Guy had been tortured before he died. He closed with her words: “My heart was full. I know who my father is.”

Jennifer Johnson is a retired Toronto librarian now living in Mulmur. The story she told was personal, funny, sentimental and rich in visual images. In “First Love: A Girl from Galt’s Story,” Jennifer described herself as a seven-year-old tomboy loaded with toy weaponry meeting a boy with “the most gorgeous mop of black hair over two limpid blue eyes.”

Eric’s story – “What Possessed Me?” – was a strong and thought-provoking reflection on his trip to Bosnia in 1999, soon after the end of the war there. “They dropped four million shells in three years, or was it three million shells in four years?” he puzzled, sparking him to ask with respect to a number of similar ghastly absurdities from that brutal civil war, “What difference does it make?”

Retired land surveyor Chris Sexton splits his time between Thornhill and a property north of Terra Nova. In “A Story about a Song about a Story” he tells a historical tale amusingly related in an Irish lilt and partially sung to his own 12-string guitar accompaniment. “Frankie and Johnny were lovers. He was her man. And he was doing her wrong.” The story behind the lyrics was apparently true, and with some licence, it morphed into the classic ballad about a fatal love triangle long ago in St. Louis, Missouri.

I was struck by the breadth of subject matter in the eight tales told over two hours (with a break for refreshments), and by the diverse manner of the telling – sentimental, humorous, uplifting, poignant, ironic.

Delights ranged from mundane (the joys of having a toilet in the basement as a kid, so you didn’t have to take off your winter boots; the momentous occasion of buying a first bra at Zellers) to the moving personal remembrance of a grandmother’s story about lifting the spirits of “her boys,” the wounded World War I soldiers she was nursing, with a simulated Christmas snowstorm on a hospital ward on Malta.

I was also intrigued by the differing preparations of individual storytellers. Some memorize their stories from written scripts, others work from an outline in their mind, allowing flexibility for the mood or attention span of a particular audience. Still others write and rewrite their story, absorbing it as it evolves, and some just “let it go,” improvising from the kernel of an idea. The Circle meets monthly at a member’s house to rehearse their tales with one another, polishing their presentation and listening to critiques and suggestions for refinements.

“My storyteller’s thing is life lessons, usually about my own missteps,” Chris told me, smiling and still flushed from his 10 minutes on stage. (All the stories told at the event were about this length or a little longer.) “In its highest form,” he added, “storytelling is more than entertainment. An anecdote, but it has a message, a lesson to be learned.”

In Dick’s experience, “storytelling forces you to sort out your thoughts, to be deliberate in thinking through an issue, to take a topic and see what you can do with it. I could have told my story in two minutes. Listeners have to get some information about me, about the subject and, I believe, some insights about themselves. That takes time.”

But is time the friend of oral storytellers? Is there hope for the future of the patient art of storytelling and listening in this digital age, with its 280-character tweets, Instagram moments and abbreviated text messages?

In the view of many, the answer is yes, though the format is evolving. The spoken word, whether for entertainment or enlightenment, seems to be in the midst of revival, driven by podcasts and audiobooks: traditional novels, short stories and poems read – or performed – by A-list actors and sometimes the authors themselves.

As of 2017, 61 per cent of Canada’s traditional book publishers also featured a line of audiobooks, nearly quadruple the number in 2015. In the first six months of 2018, audiobooks accounted for about 4 per cent of adult book sales in Canada. Though small, this percentage represented a 100 per cent increase over the entire previous year.

There has also been a huge increase in digital platforms where enthusiasts can purchase or listen to the spoken word. Subscription services, such as Audible and Kobo, and smart speakers, such as Alexa and Google Home, offer both audiobooks and podcasts.

It’s all about ease and multitasking – listening to Hamlet through earbuds while cleaning the house, or running errands in the car while tuning in to André Aciman’s Call Me by Your Name, narrated by Armie Hammer, who starred in the Oscar-nominated film version.

But the tradition of storytelling remains at its most charming and personal when it is lovingly nurtured by the likes of the Dufferin Circle of Storytellers.

“You can tell a story on YouTube, or via podcast or audiobook, and reach a million people, but you’re speaking to a camera or into a microphone,” Eric Nagler commented as a satisfied crowd departed through the church’s broad, open doors into the lowering autumn light. “You can tell the same story in a small auditorium and reach a hundred people, and that’s when you start connecting … There is very little that is more connecting than telling a story to a live audience.”

Nancy Woods had the final, quiet words for those who might consider storytelling: “Listen to your heart. Tell a story you love, because it is going to be with you for a long, long time.”

Listen up, or tell your own 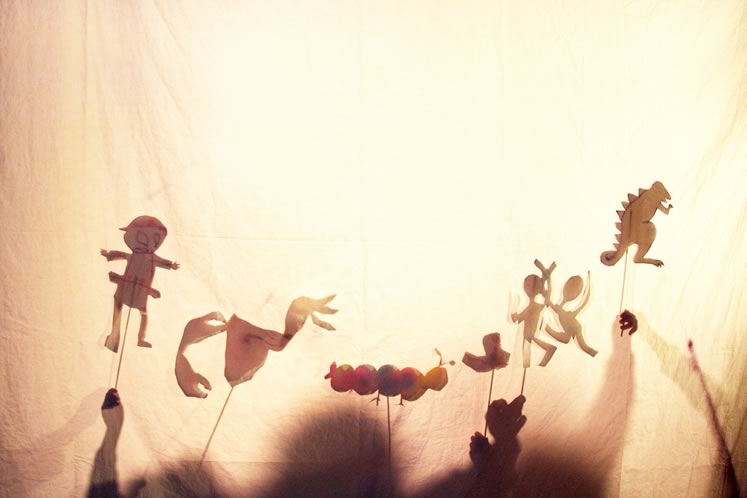 The Dufferin Circle of Storytellers welcomes volunteers, new storytellers and invitations to perform. This autumn, the storytellers will once again tell tales at Corbetton Church on the grounds of the Museum of Dufferin in Mulmur. Mark the date on your calendar: Sunday, Oct. 25, at 2 p.m.

But you needn’t wait till fall to enjoy their stories.

A storytelling open mic evening is planned at the Terra Nova Public House in Mulmur on April 23 after dinner (about 7:30 p.m.). Bring your own stories.

Anthony Jenkins is a freelance writer and illustrator who lives in Mono.
Add a Comment