A backyard rink is just one of the deft holiday moves NHL linesman Shandor Alphonso and his wife, Jacelyn, make for their young boys at home.

Come winter, the distinctive thwack of hockey stick meeting puck regularly reverberates around Zander and Nixon Alphonso’s backyard. This scene, of course, plays out across the country – but not all homemade rinks come with their own professional official in the form of Dad, aka Shandor Alphonso. 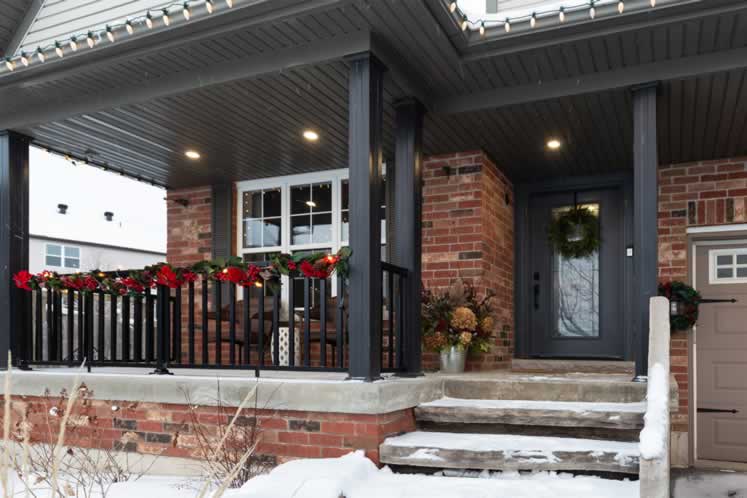 The holiday season starts in November for Shandor and Jacelyn Alphonso and their boys with outdoor decorations and a sparkling Christmas tree. Photo by Erin Fitzgibbon. 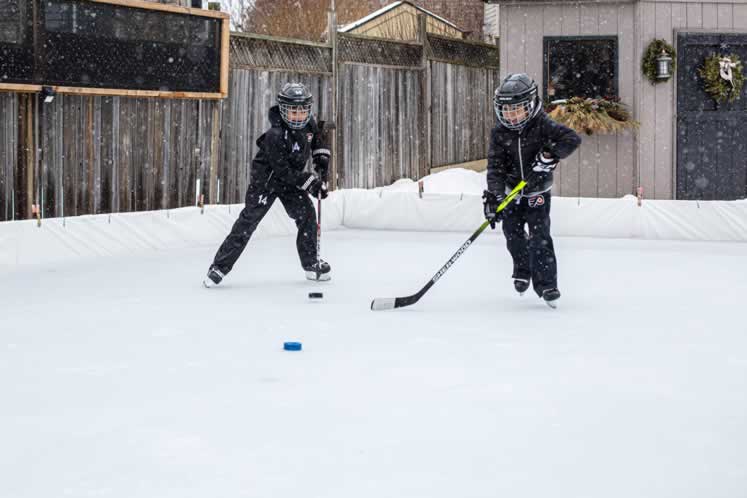 Zander and Nixon Alphonso hit the ice in the backyard of their Orangeville home. Photo by Erin Fitzgibbon. 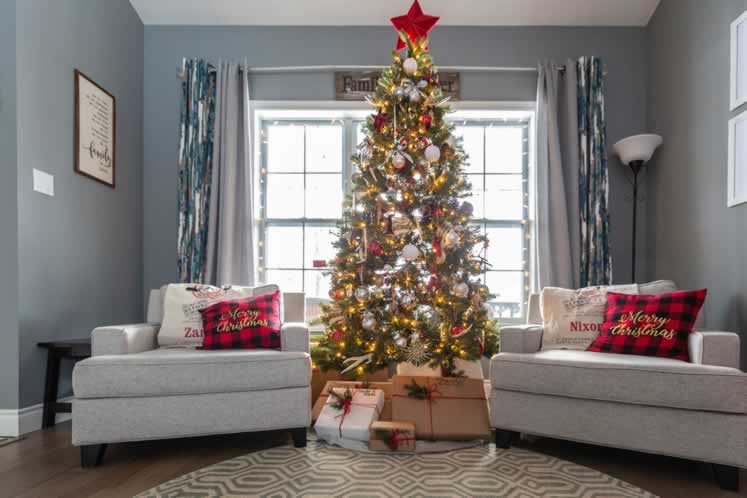 Shandor has been a linesman with the National Hockey League for the past six years, and along with his wife, Jacelyn, has chosen to call Orangeville home. The two grew up on the same Orangeville street and believe their hometown is the perfect place to raise a family. They love the small-town feel but also appreciate the benefits of a nearby city – and its international airport, a must for Shandor’s work.

Before moving back to Orangeville in 2010, the pair lived in Thunder Bay, where they both attended Lakehead University and Shandor played for the university’s hockey team. But when his dream of an NHL career didn’t pan out, he changed course and started working his way up through the officiating ranks. In 2014, after attending an officiating camp in Toronto, he landed an NHL apprenticeship – and his path was set. “I’m grateful to be in the league after my dreams of playing there professionally didn’t quite become a reality,” he says.

What’s more, Shandor is the NHL’s sole active Black official – and one of only two Black officials in NHL history. So he believes his gig comes with the added responsibility of being a role model. “I feel I have a responsibility to inspire young Black athletes in hockey,” he adds.

This impulse clearly starts with his sons, Zander, 7, and Nixon, 5. The boys adore hockey and play in organized leagues as well as on that 20-by-40-foot backyard rink. By comparison, an NHL rink measures 200 x 85 feet. 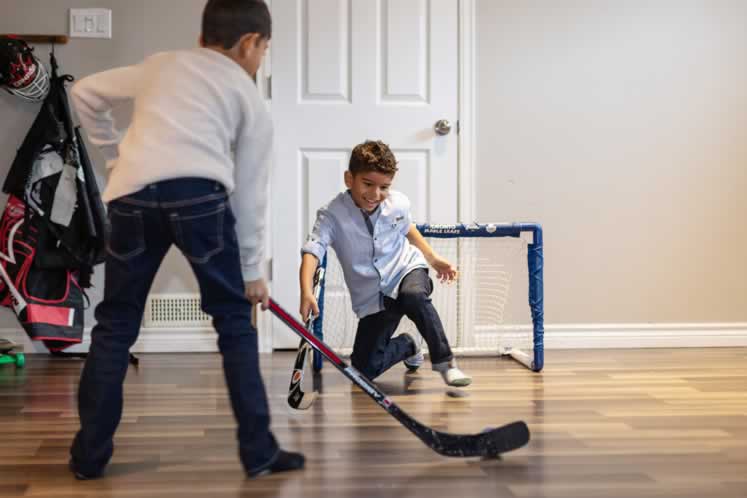 Zander and Nixon practise their hockey moves inside too. Photo by Erin Fitzgibbon. 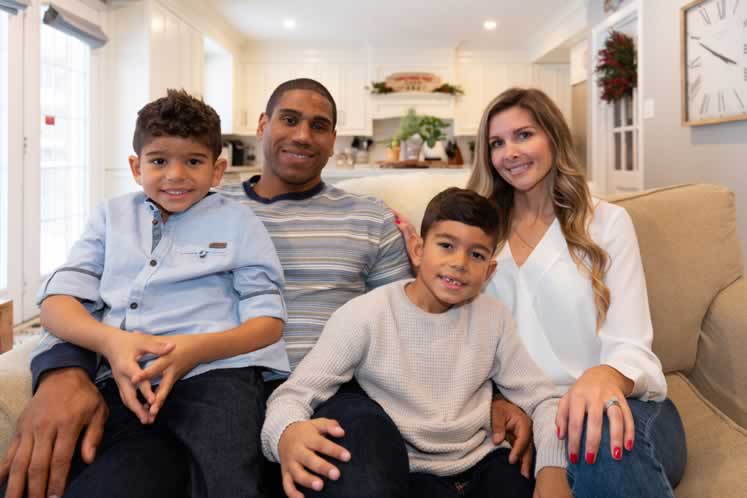 Zander, Shandor, Nixon and Jacelyn cuddle up at home. Photo by Erin Fitzgibbon.

To create that beckoning slab of ice, the Alphonsos hired Orangeville’s Cedarcroft Landscape & Design to install a sports pad. Every winter the Alphonsos lay down a liner and set up rink boards made by the American company EZ Ice. They flood the rink once the temperature stays consistently below -2C. Thanks to the big spotlight installed by Mulmur’s Always Current Electric, the family can continue playing after dark. And lest anyone thinks the NHL helpfully lends out a Zamboni, keeping the ice clear definitely involves manual labour.

“I’m usually the one out there shovelling the snow off the surface,” says Jacelyn with a smile. A busy realtor, she co-ordinates the boys’ hockey practices and maintains the rink when Shandor’s schedule takes him on the road. A typical NHL season sees him travelling all over the United States and Canada to officiate 74 games a year. That’s about three games a week.

Because of the coronavirus pandemic, the start of the 2020–21 NHL season has been delayed until at least January 1. And the end of the 2019–20 season was, of course, wildly out of the ordinary. The usual trade-off for being away so much during hockey season is three months off in the summer, but this past summer Shandor officiated in the post-season for the first time and ended up being away for 32 days during the Covid-delayed playoffs. For those 32 days he lived in the NHL bubble in Toronto’s Royal York Hotel.

After being isolated for so long, coming home to the family’s craftsman-style house, purchased in 2017, was a relief. The feeling of comfort and ease in the home is all down to Jacelyn, who was a real estate stager before becoming a realtor in 2019. She staged for realtor Monica Bond, who suggested Jacelyn get her licence so the two could become a team. “Monica has been in the business for 11 years, so it’s incredibly helpful to bounce ideas off each other,” says Jacelyn. 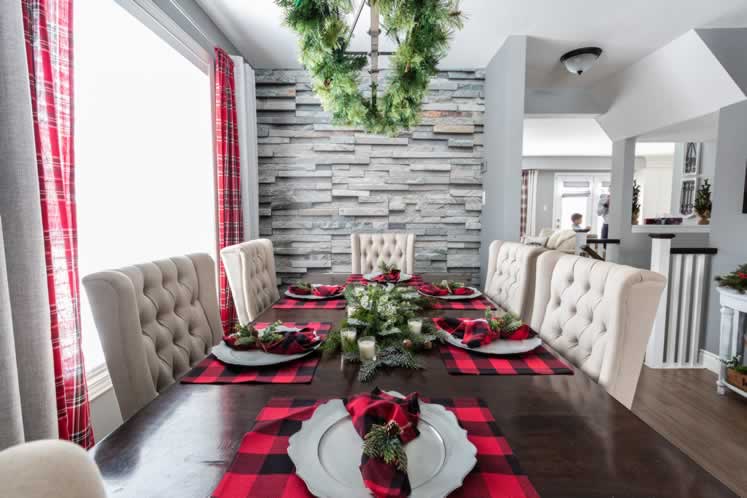 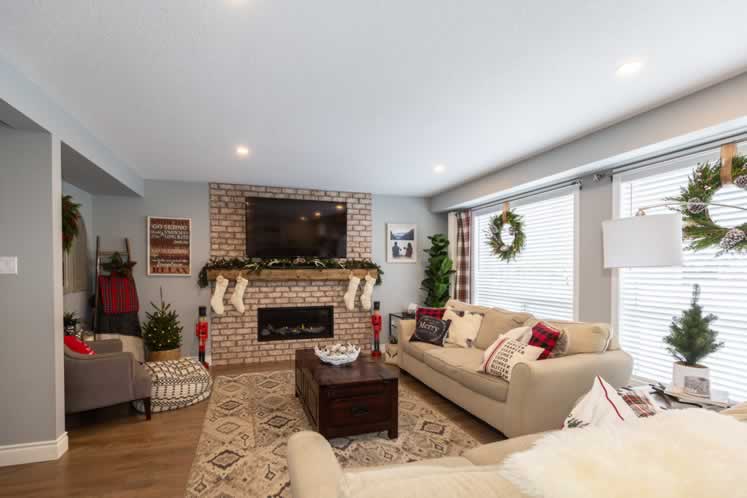 The cozy family room is dressed for the holidays in greenery and seasonal decor. Photo by Erin Fitzgibbon. 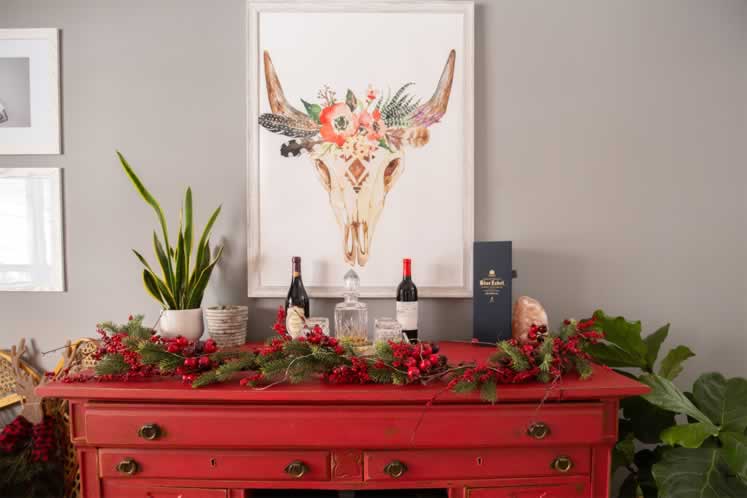 Jacelyn’s most treasured piece is this vintage red sideboard. Photo by Erin Fitzgibbon.

Jacelyn has always loved design and her light touch is obvious throughout the roughly 2,700-square-foot home (built in 2002). Her most treasured piece is a clue to her design motivations. It’s a rustic red sideboard she found at an antique store in Everett, and it serves as a festive bar over the holiday season. “As soon as I saw it I had to have it,” she says. “We had the exact same piece in my family cottage on Caledon Lake growing up. I love mixing old pieces with some more modern pieces. I like the homey feeling it creates.”

Another favourite element is the massive kitchen island, where the family spends most of their time cooking, eating, entertaining (in non-pandemic times) and playing games. The sleek, contemporary kitchen remodel was completed in 2017 by Brampton-based Devans Quality Construction.

As avid entertainers (pre-pandemic), the Alphonsos were drawn to the home’s open floor plan, and Jacelyn pulled the space together with progressive shades of calming grey and cream that allow the reds of the festive season to shine. She selected Benjamin Moore’s medium-grey paint colour “Storm” for the main space, while the TV room and kitchen feature the same company’s “Metropolitan,” a lighter grey. Toys live in the basement and the boys’ rooms. And all the hockey equipment? Into the basement storage room it goes. “Nixon has decided to be a goalie, so now we have even more hockey equipment. It’s starting to get tight,” laughs Jacelyn. 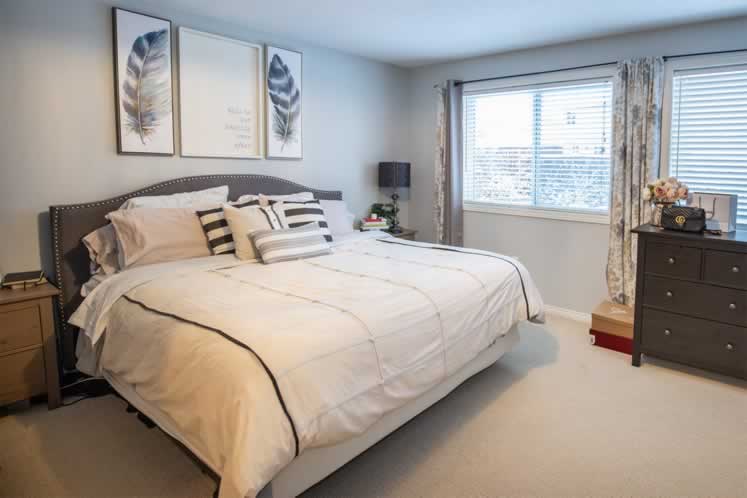 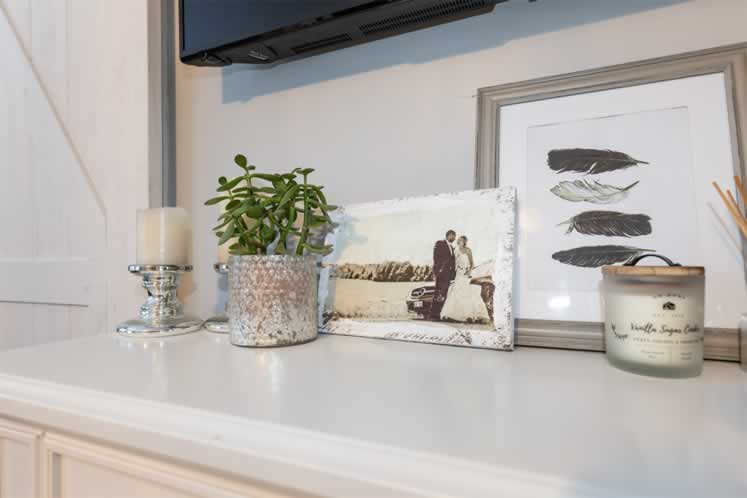 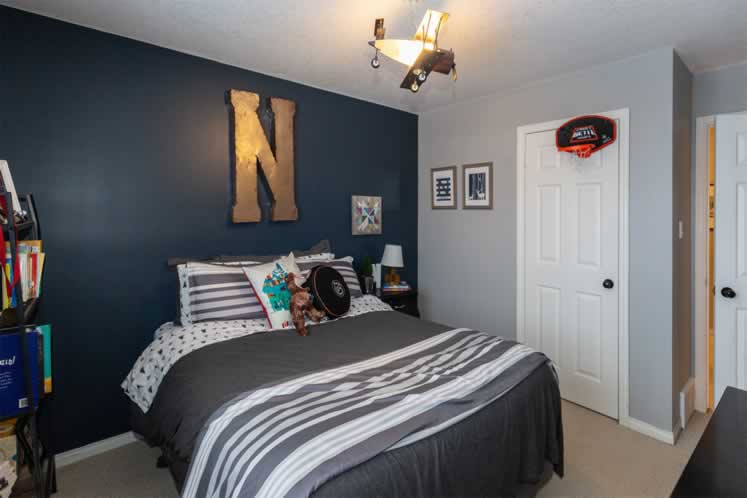 The family also transformed their garage into a gym they all use, though Shandor also does CrossFit at the Athlete Institute. Staying fit is a necessity of Shandor’s job; he’s on the ice for all 60 minutes of a hockey game, while keeping up with the fastest and best players in the league.

Asked what it’s like to be a “hockey wife,” Jacelyn says it’s the question she gets most often. “To be honest, I don’t know any other way,” she says. “Shandor played hockey when we first started dating, right through university, and then transitioned into officiating when he was done playing. This has just always been our way of life; it’s all our kids have ever known. Sometimes they get upset when their dad has to leave for a road trip, but they understand it’s part of his job.”

Those absences have always made the holidays even more precious. Hockey-inspired touches include an Elf on the Shelf named Puck. Riley, their 14-year-old Yorkie, will sport a festive ribbon. And a tree went up just after Remembrance Day. 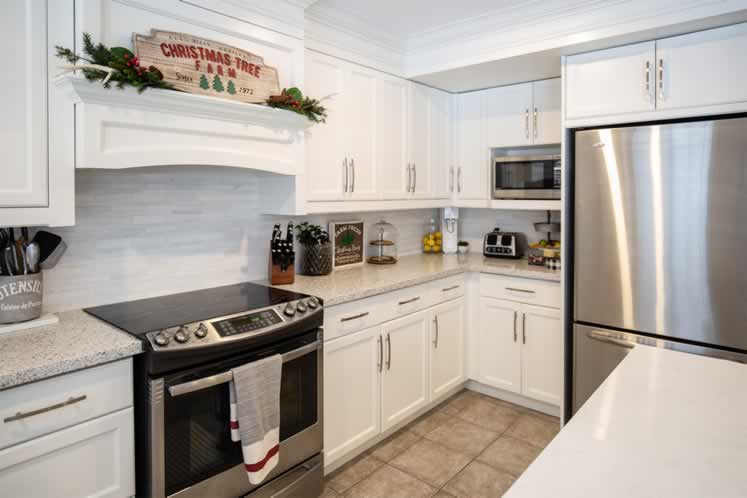 The Alphonsos’ bright kitchen is the heart of this family’s lifestyle. Photo by Erin Fitzgibbon. 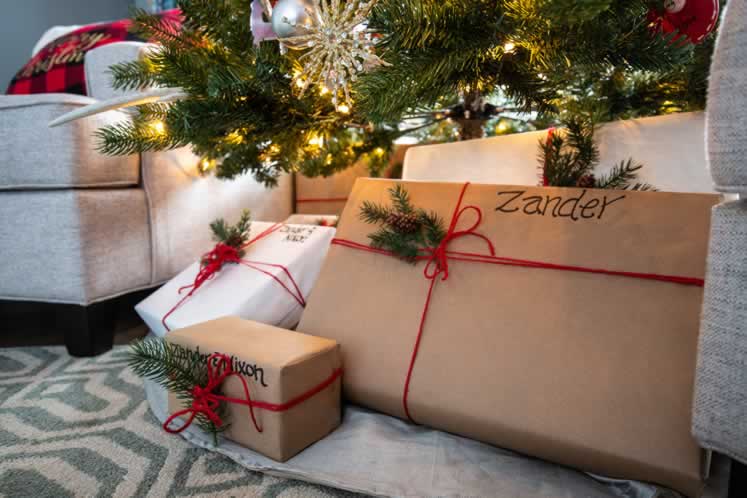 The family’s Christmas gifts are wrapped simply and tied with red string. Photo by Erin Fitzgibbon.

“I just feel like Christmas goes by so fast and I want to prolong it,” Jacelyn says. “We make a gingerbread house every year, and we’ve always gone to see the lights at Kay Cee Gardens and the tree lighting ceremony at the town hall. There’s something just so magical about our town during the winter holidays. It really is like living in a Hallmark Christmas movie here.”

For Shandor, Jacelyn, Zander, Nixon and Riley, the holidays are when the family revels in their own happily-ever-after story. You could say the puck stops here. Until it’s time to hit the backyard rink, that is.