What to plant, read, wear this spring.

Seed packets started cropping up at local retailers while the snow was still knee-deep – a sign that last summer’s kitchen garden trend shows no sign of slowing down. Need a kickstart to your planting plans? We asked Jamie Richards of Mono’s Am Braigh Farm for a few DIY tips. 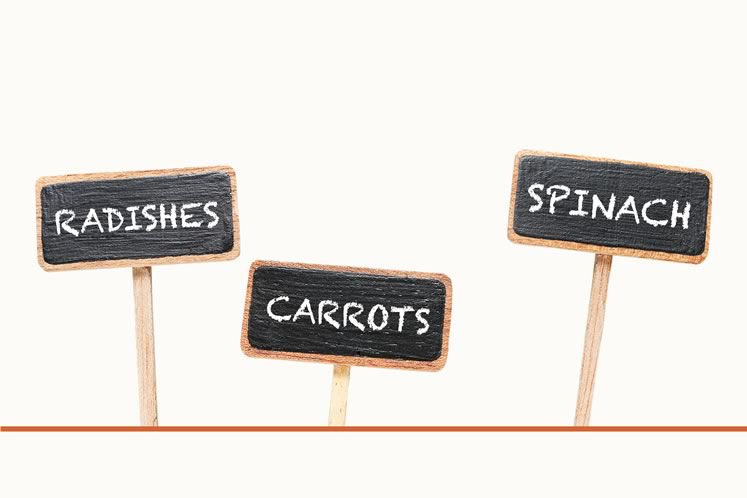 Q  What is the best time to start planting?  Popular wisdom says Victoria Day weekend, but we begin planting the third week of April and continue until the first week of September. Hardy crops are peas, spinach, radishes and carrots; semi-hardy are beets, broccoli and lettuce; somewhat frost-tolerant are onions and leeks; tomatoes, cucumbers and squash are tender – plant accordingly.

Q  Can you recommend a first vegetable to try if we’re looking for a quick win?  Radishes thrive in 30 days during the cooler wet weather of late April and May.

Q  Rookie mistake to avoid?  Spacing counts! Giving plants room to grow will increase yields, plus a jungle is hard to weed and harvest. (Save the seed packet for details.)

For seeds and plants, check out local nurseries such as Dufferin Garden Centre or Mono’s 10 and 10 Garden Centre, or in Caledon, Stephanie’s Country Greenhouse, Rock Garden Farms or Glen Echo Nurseries. Or check out seed libraries such as Erin Seed Lending Library.

The pandemic has been a hard go for families with young kids and teens, so we’re grateful there are some bright lights on the local mental health services scene tailored to this group. Orangeville teacher and parenting expert Jill McPherson coaches via empathetic webinars. For kids who find comfort in creativity, Art as Therapy (Orangeville) offers counselling based on drawing, crafts and other tools. Orangeville’s Dufferin Parent Support Network hosts online parent workshops on topics from self-regulation to anxiety, and the Upper Grand District School Board’s new Mental Health & Me website shares age-appropriate supports. (For resources for new parents, see “It Takes a Virtual Village”.) 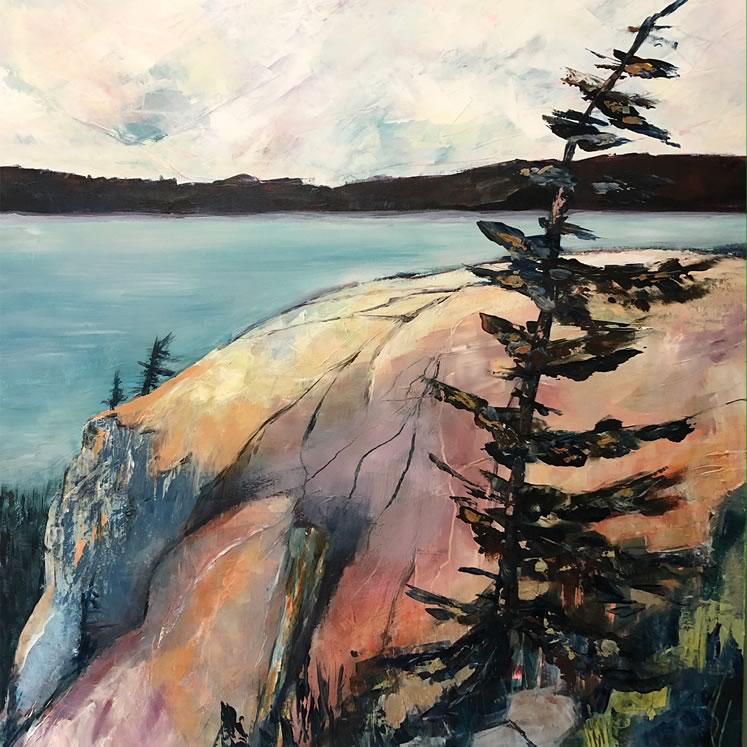 Save the Date: Making art IRL

At Deb Menken’s live Maggiolly Art workshop in Orangeville, called The Abstracted Landscape in Acrylics (Thursday, May 13 and Friday, May 14), participants will work on creating harmonious colour schemes based on Northern Ontario landscapes. Sounds like a balm for the soul. 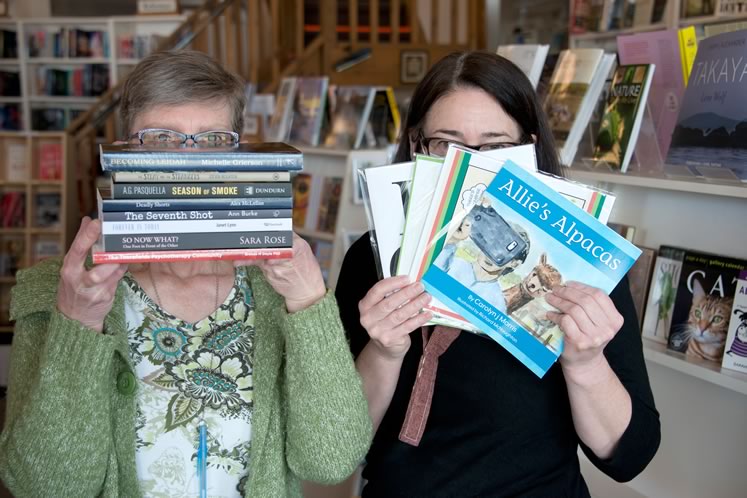 BookLore staffers Brenda Juno and Jan Hettwer peek out from behind a bumper crop of new local books. Photo by Pete Paterson.

Daffodils and tulips aren’t the only things sprouting up with abandon this season. A bumper crop of new local books will keep us busy for months to come, says Nancy Frater, owner of Orangeville’s independent bookstore, BookLore. “As our population is expanding, so are the number of talented authors associated with the area and they all have something to say – from memoirs to true crime, from fiction to kids’ books. Their contribution to the arts scene just makes the Headwaters region richer and unique.”

Mono writer Michelle Grierson’s stormy novel, Becoming Leidah, centres on a mysterious girl born with blue skin and webbed hands and feet in coastal 19th-century Norway. The protagonist of Janet-Lynn Morrison’s new romance, Forever is Today, is inspired by the Orangeville author’s adult daughter, who has lived with autoimmune hepatitis 1 since she was 15. A.G. Pasquella, who grew up in Mulmur and now lives in Toronto, has penned a third Jack Palace mystery, Season of Smoke. Shelburne novelist C. D. Wood’s Pine Ridge: Insidiously kicks off with the tragic death of a zealous pastor. Fellow Shelburne author Alex McLellan also goes a little dark in Deadly Shorts: Death Can’t Be All Bad, a collection of short stories.

On the kids’ front, McLellan’s other new books feature a frog who wants to fly (The Frog Who Wouldn’t), a boy’s plan to banish his bedtime monster (Jeremy’s Monster), and DIY activities (I Can). Prolific pro Carolyn j Morris adds Allie’s Alpacas to her stack of charming titles. And The Stray and the Strangers – by Steven Heighton, who has roots in Caledon – is based on a true story in which a stray dog befriends an orphan boy and an aid worker in a Greek refugee camp.

In So Now What? One Foot in Front of the Other, Mono singer-songwriter Sara Rose opens up about living with loss. Steve Anderson’s Driven to Succeed: From the Infamous Streets of Jane and Finch to the Privileged Seats of Town Hall traces his journey to a career in law and 2018 election as Shelburne’s deputy mayor.

In The Therafields Psychotherapy Community: Promise, Betrayal, and Demise, Brenda M. Doyle shares the story of her time with the controversial Toronto psychotherapy-based commune that started in 1960s Toronto – and extended to five farms and a former schoolhouse property near Orangeville. Ann Burke’s true crime read, The Seventh Shot: On the Trail of Canada’s .22-Calibre Killer, recounts the story of Ronald Glenn West, the Amaranth-raised police officer charged in 1999 for the 1970 murders of two women in Palgrave and Gormley.

Stock up at BookLore, Forster’s Book Garden in Bolton and Curiosity House Books in Creemore. 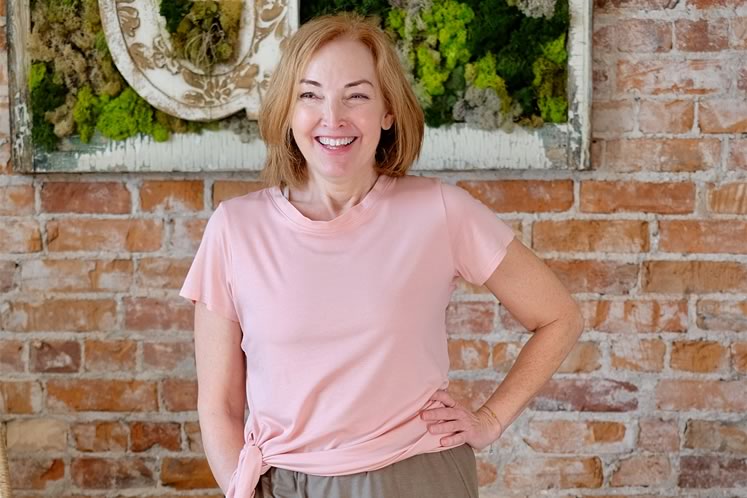 Finding locally stitched clothes is getting easier by the day. Orangeville’s Meikaa Shop offers expandable modern pants for babies and kids – plus spring beanies to match, all made of eco-friendly bamboo. For adults, GoYoga Orangeville recently launched their own loungewear line designed and made by the GoYoga team. We’re eyeing the Hannah Pant, Britt Tie Tee and Maple Tunic for look-good, feel-good spring wear.