The rocky terrain on an escarpment precipice inspired rather than deterred the creation of this expansive Caledon garden.

Set against a thickly wooded backdrop, Susanne McRoberts’ gardens imbue her country property with a Zen-like tranquility. “Experiencing a garden is a sensual experience that feeds my soul,” Susanne says of the gardenscape she has been creating for nearly 30 years. “It’s not just about what you see, it’s what you smell and what’s evoked inside you.” 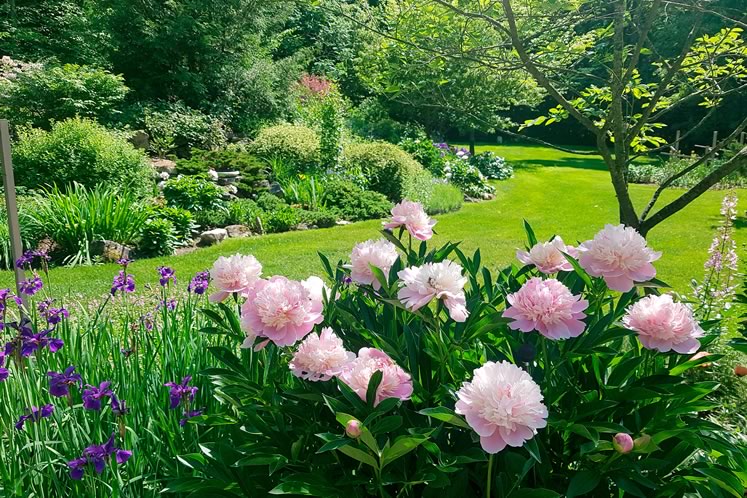 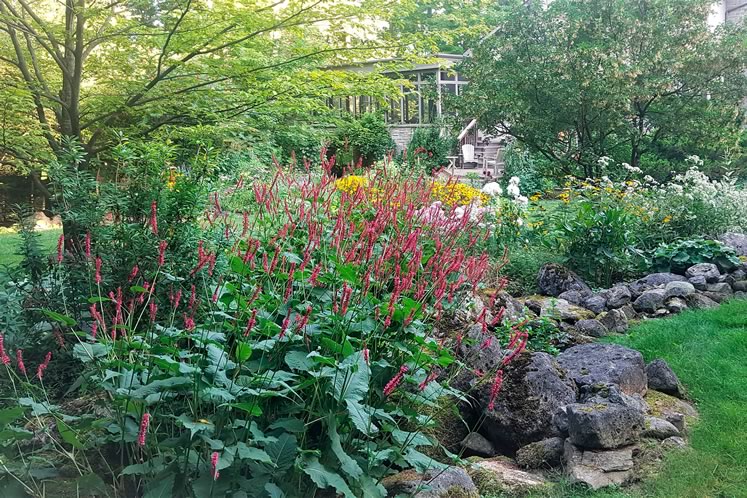 Looking back at the house from the top of the rockery, spiky mountain fleece explodes in colour from midsummer until frost. Other stars include phlox and gloriosa daisies. Photo by Susanne McRoberts.

The seven-acre property is perched on a rocky precipice of the Niagara Escarpment in Caledon and boasts long views of the Credit River valley. Three decades ago, Susanne and her husband, Bob, built their dream home here. Constructed of stone and stucco, its airy, elegantly simple design features enormous windows framing the compelling outdoor vistas. The couple turned their creative attention to the gardens a couple of years after they moved in and today the gardens encompass just over half an acre.

Verdant shades pervade in a seemingly effortless flow, punctuated by both gentle and bold profusions of colour. Pink primula float on a sea of green; long, furry tassels of burgundy amaranth dangle next to round, peachy blooms of dahlias. “I am not particularly rigid about a colour palette,” says the avid gardener. “I use colour to create a rhythm through repetition, harmony and drama that changes as the perennials have their moment during each season.” 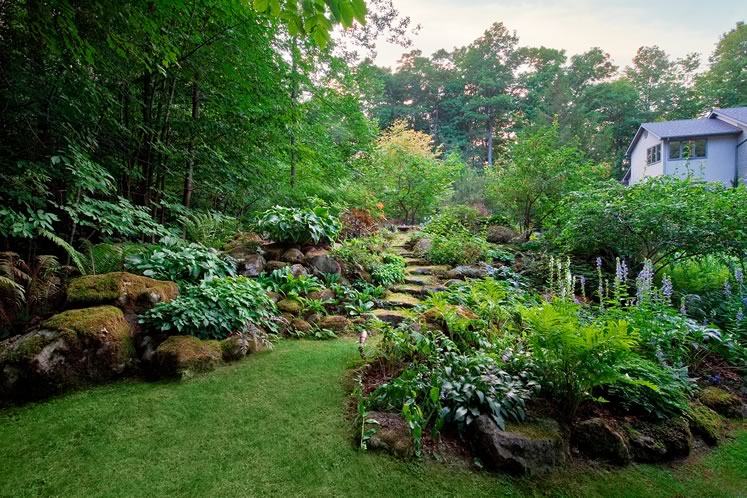 The couple began the project all those years ago by mining their property, hand-excavating their way through piles of limestone and granite rocks using a shovel and a crowbar – a daunting task that might have discouraged the ambitions of many gardeners, but served only to fuel those of the McRoberts. “We had a lot of work to do to get things in order and treated it as an exploration mission,” Susanne says. “It was an exciting way to build things because we didn’t know what we would unearth – I love the unexpected. We took things slowly, working on completing one small 10- to 12-foot section a year.”

Along the way, maintaining a natural aesthetic was of utmost importance. “I wanted everything we designed to fit with what we were given. We were gifted with some incredible attributes on this property – the woodland, the rocks and the moss. The configurations we chose, and the plants we populated the gardens with, were carefully considered – we wanted things to look as they would in nature.”

The natural effect holds even as Susanne combines exotic perennials with native ones to create fanciful vignettes. 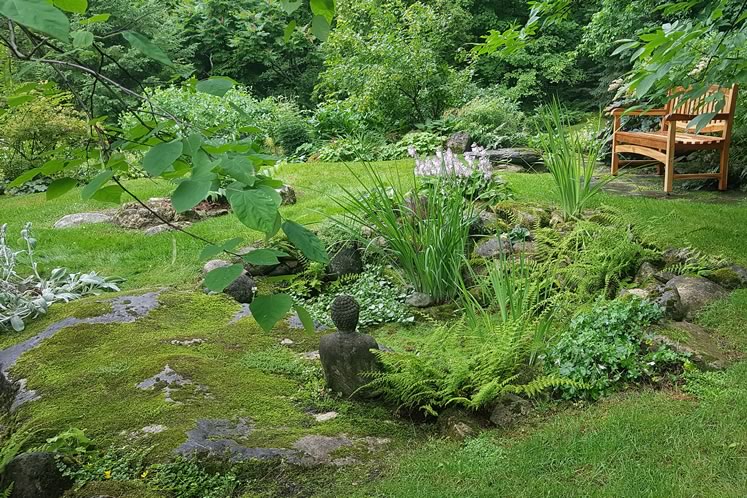 At the top of the rockery, a stone Buddha meditates next to a moss “pond” encircled by Siberian irises, hostas, wild ginger, spotted dead nettle, ferns and alpine lady’s mantle. Photo by Susanne McRoberts.

At the front of the house is a magical spot she affectionately refers to as Top of the Rockpile. An expansive moss-covered berm was the first portion of the garden to be completed. Standout features include a stone staircase built by Bob, and what Susanne calls her “mirage garden,” a hollowed-out natural rock bed lined with moss and dotted with low plants. At first glance, it looks like a miniature green pond. When it came to planting this partly shaded area – the mix includes Japanese painted ferns, native ferns such as maidenhair spleenwort, and hellebores – Susanne says the natural crevices among the rocks drove the design. “The soil is naturally packed with roots and rocks, so where planting holes could be delved, soil was amended with compost and triple mix.” A stone Buddha is tucked into the garden for good measure.

Susanne seeds the abundant kitchen garden near the house with spinach, Swiss chard, kale, green beans, cucumbers and other vegetables. Remaining true to the spirit of the unexpected she so appreciates, she adds visual interest by pairing the vegetables with other plants at various heights, including the very tall amaranth. “There’s something special about the feel of undulation in the garden, when your eyes move up and down, in and out.”

(And in case you’re wondering, no, these companion plantings are not primarily for pest control; the blooms are largely “ignored by the deer who regularly visit my garden buffet,” Susanne says.) 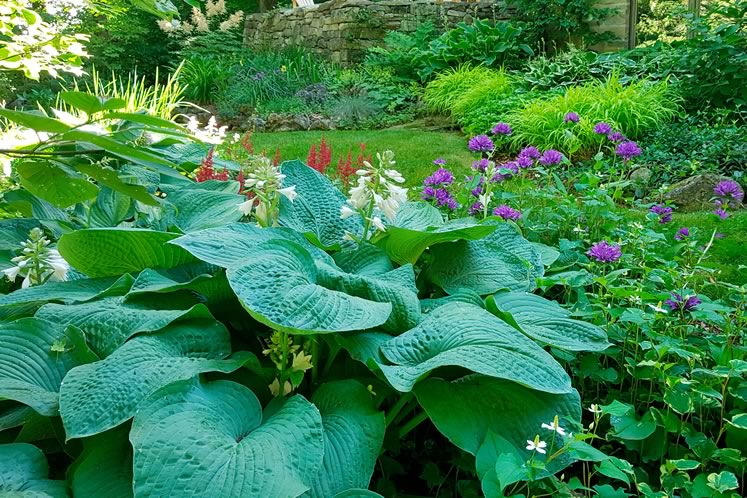 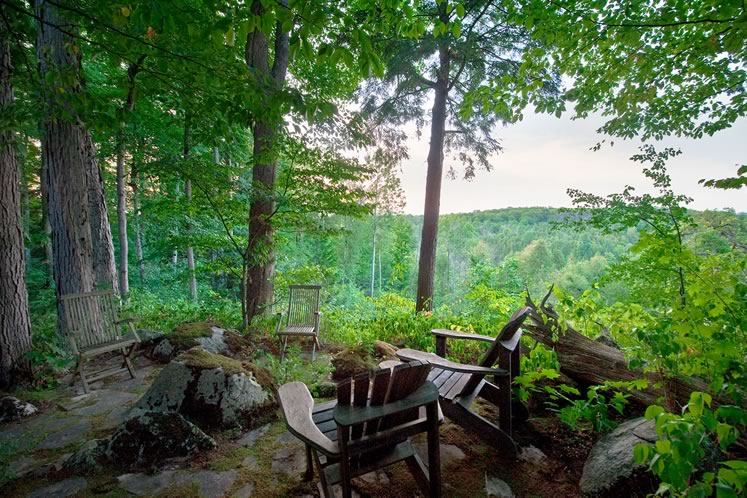 At the back of the property, a rustic patio on the cliff’s edge overlooks the Credit valley. Moss and ferns are among the native woodland plants growing wild between the rocks, including Jack-in-the-pulpit and trilliums. Photo by Rosemary Hasner / Black Dog Creative Arts.

Around the back of the house, the shaded woodland environment is a place of quiet contemplation. Susanne says she particularly delights in immersing herself in this wilder space and experiencing its wonders. A few years ago, a friend made her a large backless bench and installed it for her on a stone patio. From it she can look out into the woods, across the valley or back into the garden. She says, “I also love to lie down on it, look up at the tall trees above, and enjoy everything we have created.”

Susanne’s thoughtful companion plantings rely on two techniques. She plants some pairs to peak at the same time. Others are designed to bloom in succession. Here are five of her favourite combination. 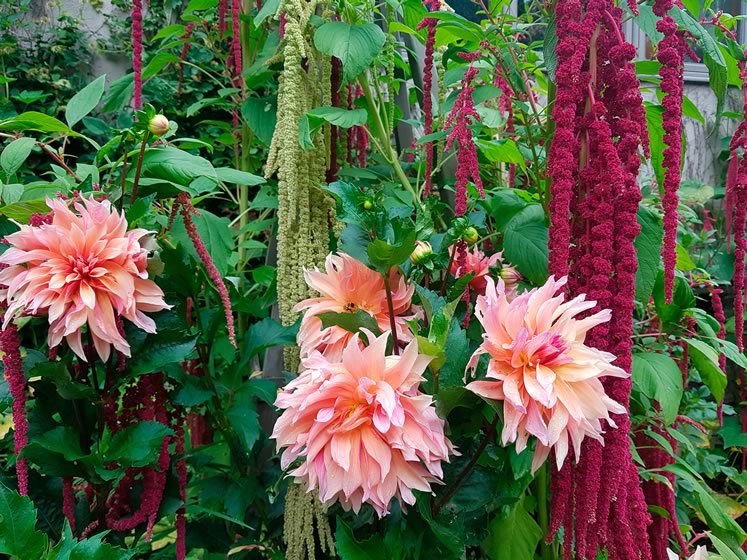 The deep red ‘Love-Lies-Bleeding’ and the light green ‘Viridis’ varieties of giant amaranth provide a jungle-like backdrop to the soft petals of peach-coloured ‘Labyrinth’ dahlias. The amaranth’s dramatic, tassel-like panicles can grow up to three feet long and drip from the branches in profusion throughout summer and early autumn. Be careful not to plant them too close together, Susanne says, as the amaranth could shade the sun-loving dahlias. The two flowers also work beautifully together in fresh and dried arrangements, she adds. 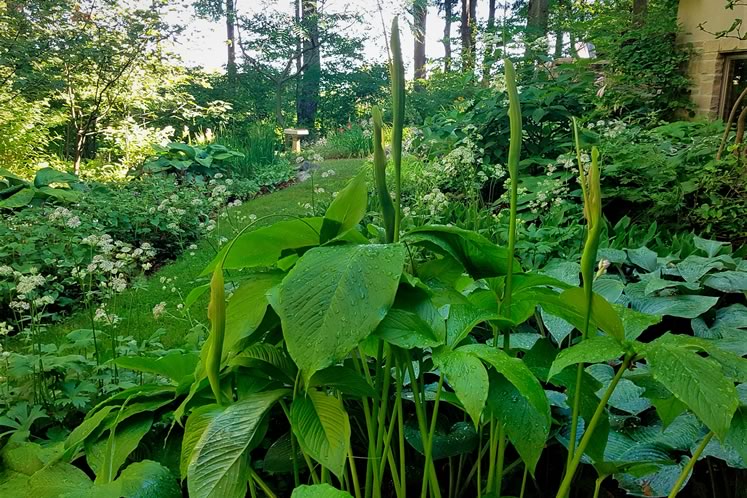 “These work beautifully together and have a complementary contrast,” Susanne says. “Pinellia tripartita ‘Polly Spout’ is a standout specimen plant in the woodland garden. Its deeply divided green leaves resemble those of its cousin, Jack-in-the-pulpit.” An unusually long tongue, called a spadix, extends from its greenish calla lily-like bloom. Because it doesn’t emerge until late spring, Susanne has underplanted it with an earlier-blooming Primula sieboldii that has umbels of dainty snowflake-like flowers. 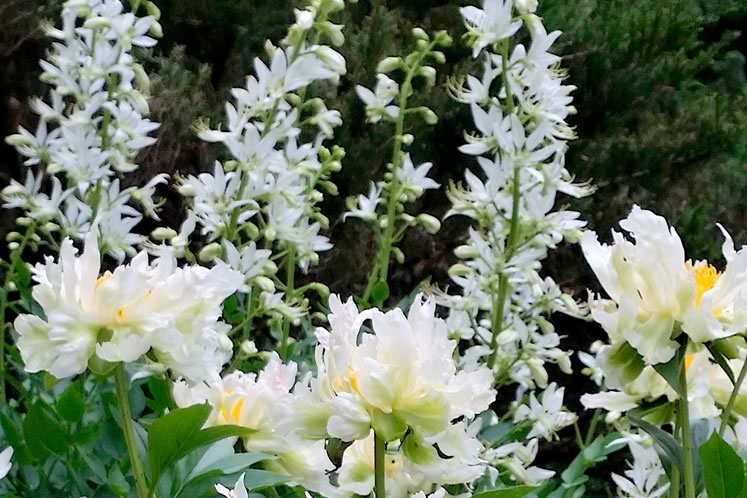 These peak together in June and create a moment as beautiful bedmates, Susanne says. “The gas plant (Dictamnus albus) has tall spikes of delicate white flowers that sit on top of citrus-scented foliage.” White and yellow peonies play well here – Susanne is fond of the ‘Krinkled White’ and ‘Green Lotus’ varieties. 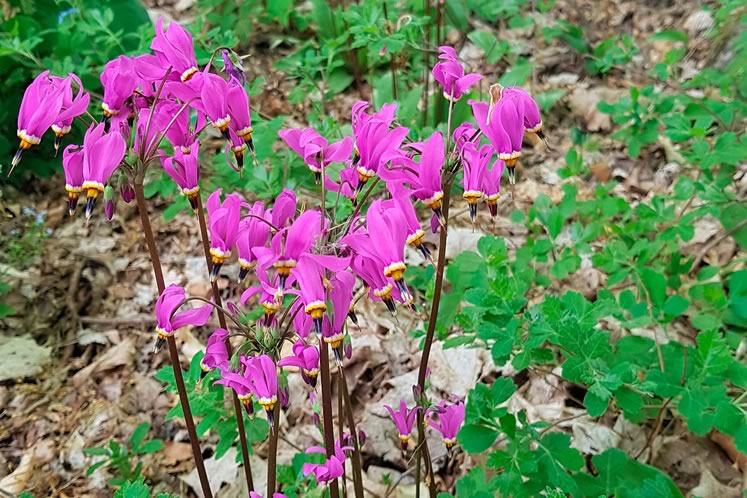 “These maintain a succession of interest over the garden season,” Susanne explains. “Shooting star (Dodecatheon meadia) is a spring ephemeral with pretty pink cyclamen-like blooms that grow up to a foot tall. Planted in a drift, shooting star makes a beautiful show in the woodland garden among the still mostly bare stems of the sumac variety ‘Gro-Low’, a cultivar of the native shrub Rhus aromatica. When the sumac leaves appear later, they mask the dying foliage of the spent shooting stars. 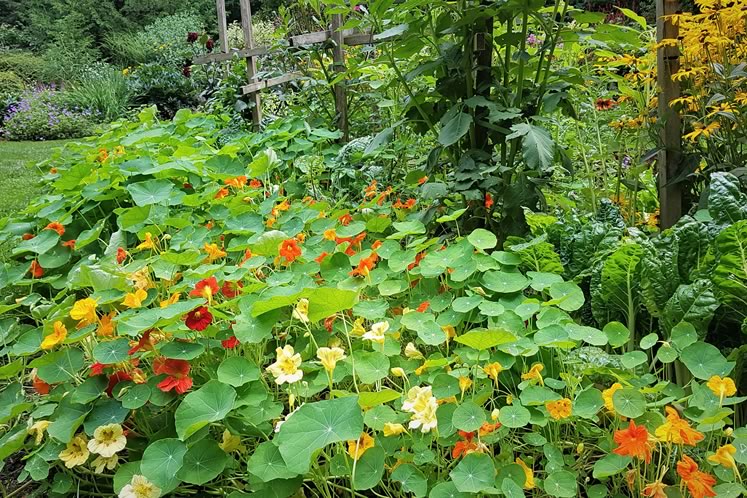 Every autumn, Susanne plants a double row of garlic bulbs along the edge of her kitchen garden. The garlic sits just in front of self-seeding nasturtiums. In the spring, the garlic’s foliage sprouts and by late June delicious scapes emerge. By the time the garlic bulbs have been harvested in late July, the boisterous nasturtiums are spilling over to fill the space. And their edible flowers in shades of red, orange and yellow become an eye-catching foil to nearby vegetables, such as the deep green Swiss chard pictured here. 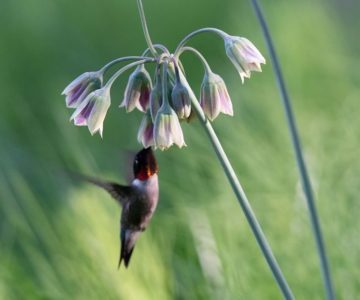 Dedicated local gardener Tony Spencer channels the aesthetic of the famed Dutch plantsman into his corner of the rural countryside of Mono. 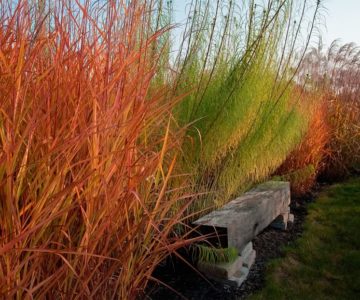 Splendour in the Grass

Mono gardener Misha Dubbeld’s newest garden, full of swaying grasses and anchored by a spillway of field rocks, was carved out of a windswept field. 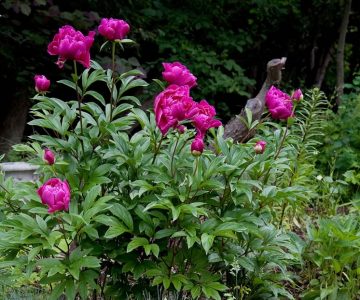