Late spring in the Hockley Valley sees the demise of most of the early bulbs, though a few of the late-blooming narcissi and tulips are still putting on a show. The focus in the garden now shifts towards the early perennials, a prelude to the gaudy extravaganza in June.

In late May, the rock and woodland gardens come into their own. Rhodo­dendrons and azaleas vie for attention along with such other shade-lovers as primulas, woodland phlox, jeffersonias, anemonellas and arisaemas. 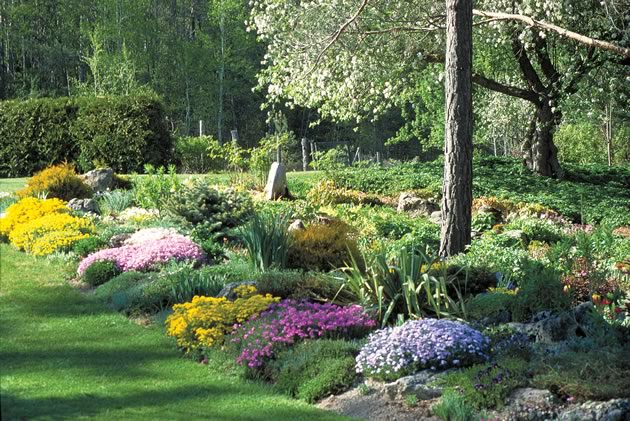 Late spring is the peak time to view the rock garden. Photo by Liz Knowles.

Late spring is the peak time to view the rock garden (above). Several phlox, including P. douglasii and P. subulata, form large mats of white, pink and blue on the sand bed and make a colourful tapestry with yellow Aurinia saxatilis (Basket of Gold). 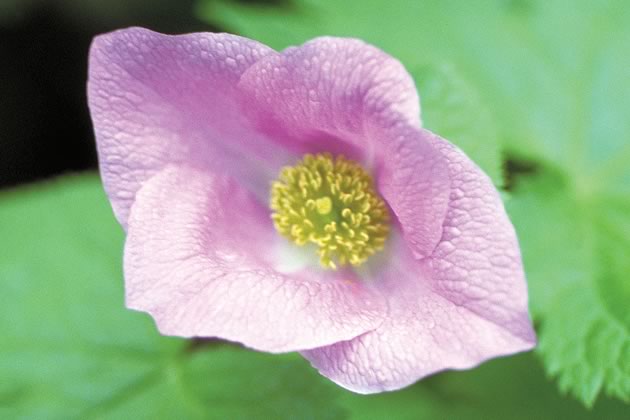 Glaucidium palmatum, a member of the peony (Paeoniaceae) family, hails from Japan. Photo by Liz Knowles.

Two of the stalwarts in my woodland bed originated in the Far East. Glaucidium palmatum, a member of the peony (Paeoniaceae) family, hails from Japan. Grown from seed, my plants come back reliably every spring in a woodsy/humusy soil. They dislike prolonged drought, heat or high humidity and should be sheltered from the wind. Up to 30 cm high, the flowers come in pastel shades of mauve and lavender. There is also a white form. 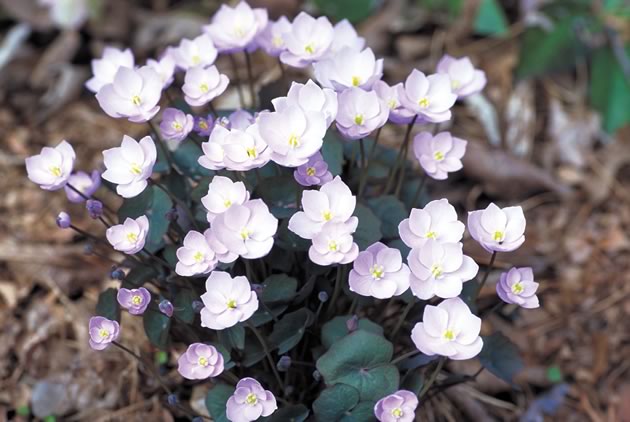 Jeffersonia dubia is a member of the berberis family (Berberidaceae), originally from Manchuria. Photo by Liz Knowles.

Jeffersonia dubia also likes moist, humusy soil. Both plants are sited by a Magnolia stellata bush on the north side of the house. The jeffersonia has seeded around, a sure sign, if you wish to grow it from seed, that it should be sown fresh. Jeffersonia dubia is a member of the berberis family (Berberidaceae), originally from Manchuria. The only other member of the genus, Jeffersonia diphylla grows in the wild from Ontario to Tennessee. The genus is named after the third president of the United States, Thomas Jefferson. 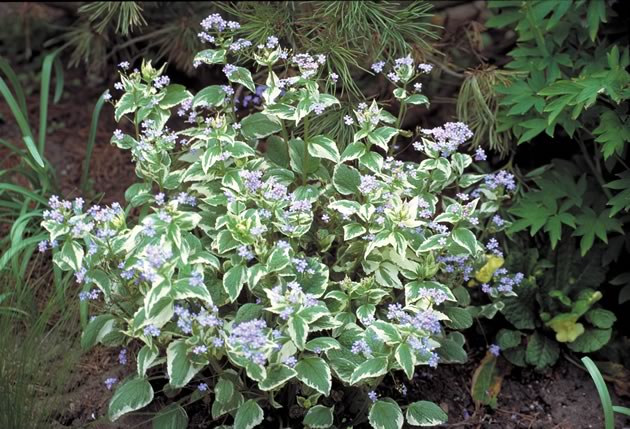 Brunnera macrophylla variegata also likes partial shade. It has distinctive white variegation and pretty forget-me-not blue flowers in May. Be sure to remove any parts that revert to green. It bulks up slowly; if you must divide it, do so in early spring. Another excellent member of the borage (Boraginaceae) family is Brunnera macrophylla ‘Jack Frost’. Recently introduced, it is a superb all-season foliage plant. It has dainty blue flowers and seeds around gently. 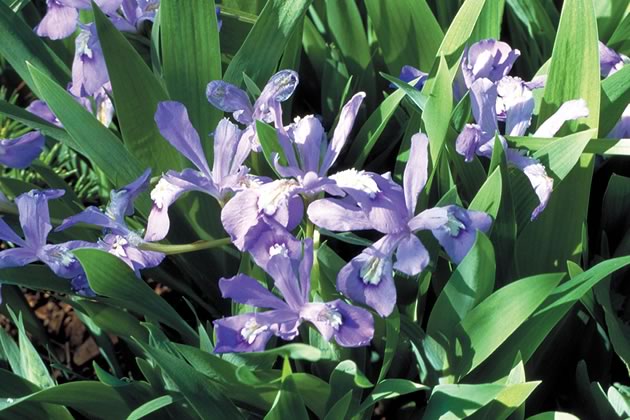 The crested iris, Iris cristata, is another native from the eastern U.S. woodlands. Its blue flowers arise from creeping fleshy stems and fans of strappy green leaves. Photo by Liz Knowles.

The crested iris, Iris cristata, is another native from the eastern U.S. woodlands. Its blue flowers arise from creeping fleshy stems and fans of strappy green leaves. 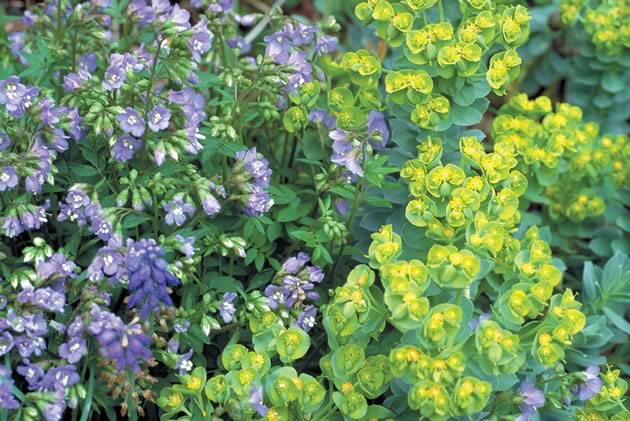 Another winning combination in the perennial border is Euphorbia myrsinites and Polemonium pulcherrimum. Photo by Liz Knowles.

Another winning combination in the perennial border is Euphor­bia myrsinites and Polemonium pulcherrimum. The polemonium comes from the west coast and is easily grown from seed. At 35 cm in height, the blue flowers stand out at the front of the border. Its neighbour from southern Europe can be a bit of a thug. Euphorbia myrsinites, commonly known as donkey spurge, releases copious amounts of seed and most of them seem to germinate, especially in gravel. But its attractions outweigh the extra weeding; its rosettes of succulent stems terminate in chartreuse cyathia – not exactly a flower but lovely nonetheless. Heat and drought tolerant, donkey spurge keeps its looks all year. 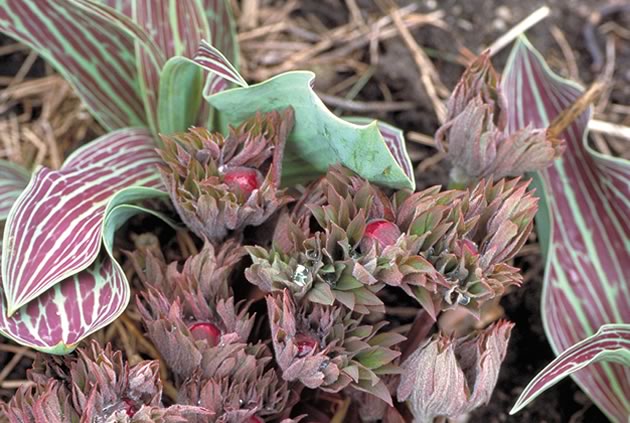 The flower buds of Paeonia officinalis anenomeflora put on a splendid show in mid-May, harmonizing with the brown-striped leaves of Tulipa greigii Oratorio. Photo by Liz Knowles.

In the main perennial border, the flower buds of Paeonia officinalis anenomeflora put on a splendid show in mid-May, harmonizing with the brown-striped leaves of Tulipa greigii Oratorio. In two or three weeks the peony blooms will be 45 cm tall, opening out into single red flowers with orange/yellow stamens. 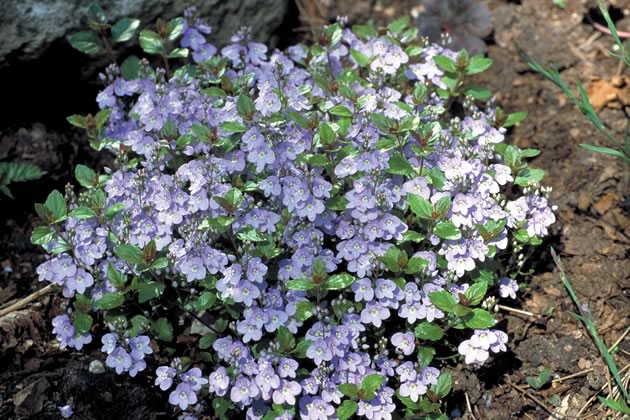 One of the best veronicas in late May is Veronica Waterperry Blue. Photo by Liz Knowles.

One of the best veronicas in late May is Veronica Waterperry Blue. At home in both perennial and rock gardens, it is easy and dependable. The flowers are a charming periwinkle blue with a white eye and continue blooming right through summer and into fall. 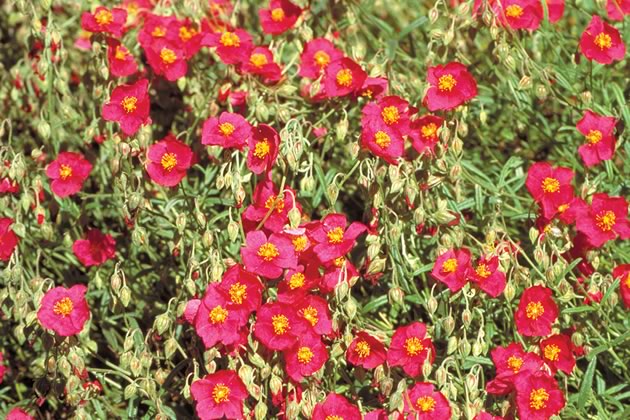 By early June the helianthemums have begun to take over. Known in the Mediterranean, their native habitat, as rock or sun roses, helianthemums thrive on sharp drainage and summer heat. They tend to be short lived; fortunately in the sand bed they seed around generously (a fact that makes some of my English gardening friends jealous!) Flowers come in vibrant pinks, oranges, white and red. Helianthemum Henfield Brilliant is one of my favourites. 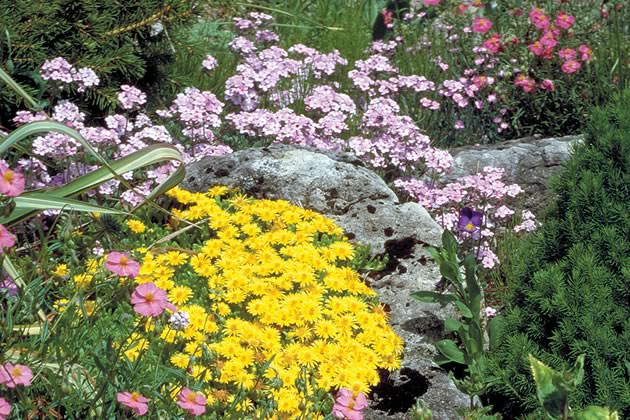 A classic combination teams pink helianthemum ( bottom) with acid yellow Delosperma nubigenum and pink Androsaci sarmentosa. The delosperma is a bone-hardy South African native. Its creeping green sedum-like foliage goes bronze in winter and, like helian­themums, it likes sharp drainage and full sun. A native of the Himalayas, A. sarmentosa (right top) rarely sets seed, it is best divided by removing rooted rosettes. 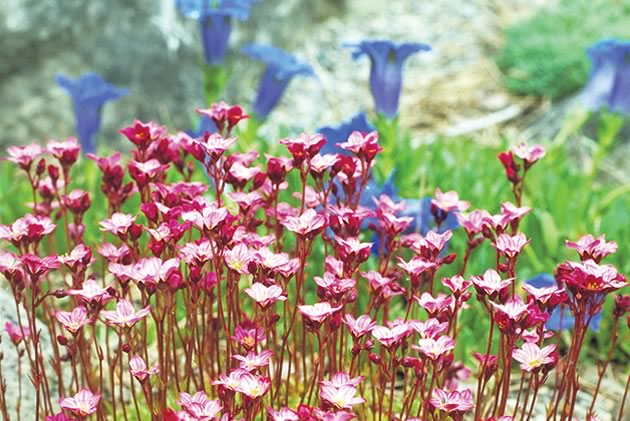 Gentians are an integral part of the late spring garden. Gentiana acaulis pairs up nicely with Saxifraga Purple Robe. For many years the gentian languished in a perennial bed, until I took a friend’s advice, “If it doesn’t bloom, move it.” Since then, it hasn’t stopped blooming. I have subsequently divided and moved it many times. 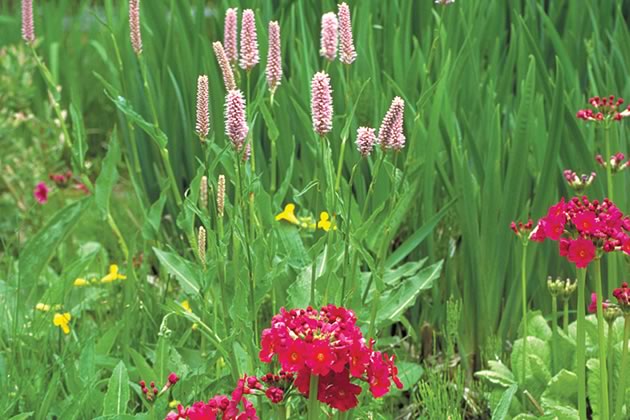 By late spring, the bog garden by the ponds is starting to show some color. Vivid red whorls of Primula japonica vie for attention with the pink spires of Persicaria bistorta Superbum. Yellow flowers of Mimulus luteus complete the picture. The latter, a Chilean native has become a bit of a thug. I routinely remove large quantities each summer; how­ever, since it blooms through to the fall, it is worth leaving some behind. Among the last of the primulas to bloom, Primula japonica’s flower stem bears up to six whorls of red, pink or white flowers. It also seeds around, but I find that I can never have too many of these lovely blooms.

About the Author More by Liz Knowles

Liz Knowles has been gardening in the Hockley Valley for more than 25 years.
Add a Comment