While Marie says she sells a lot of breakfasts, it’s chocolate milkshakes that put Steen’s on the map.

Behind the homey dairy bar, this independent family business processes millions of litres of milk each year.

“In 1945,” Tom Steen tells me, “there were eighty-seven independent dairies in Toronto. Today, in all of Ontario,” he continues, holding up five fingers and a thumb, “we have Steen’s, Kawartha, Hewitt’s in Hagersville, Brum’s in Pembroke, Farquahar’s in Espanola and Lakeside Jersey Dairy in Leamington.”

So to say that Steen’s Dairy on Erin’s Main Street is unique is no understatement. Asked why he, his brother Ken and father Fred, who died earlier this year after dedicating seventy-six years of his life to the business, never sold out, Tom says, “Family pride. I like driving by an employee’s home and thinking, I helped him build that house.” Besides, admits Tom, there was never any doubt about the business staying in the family. “I’m a stick-at-home guy.” 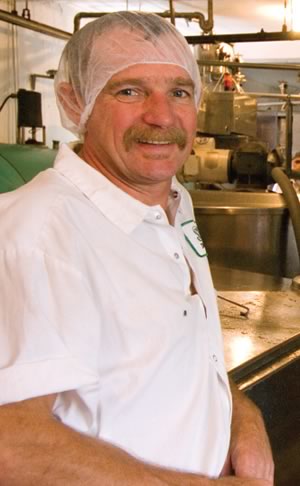 Ronnie Kirk has worked in the dairy plant for 34 years. Photo by Pete Paterson

And some of the dairy’s twenty-five employees, including Ronnie Kirk, have been around for so long, they might as well be family. Ronnie began working for Fred Steen after high school, some thirty-four years ago. Every day, he drives into Erin from Harriston. “Put that in the story,” Tom suggests, “Ronnie’d like it.”

Tom, 56, hustles between the dairy and Steen’s offices in the old Bell Hardware store a few doors north. Trim and clad in an immaculate, blue-and-white-striped shirt bearing the Steen’s Dairy logo that has never changed, it’s hard to believe he drinks four litres of homogenized milk a day. “My Dad, who lived to 94, used to eat butter by the spoonful direct from the dish,” he boasts.

Tom explains that he began with the basics, learning pretty much every part of the business: washing bottles, delivering, picking up milk, making ice cream. He admits that he’s never actually milked a cow and he’s not much for computers – a statement that makes Barb Sherar, Steen’s office manager, chuckle. Tom seems determined that his 26-year-old son Jesse will put in his time too. Having graduated with a business degree in 2004, Jesse is learning the ropes. “He started at the bottom,” says Tom. “He’s working his way up the ladder. It’s the family way.”

There’s no doubt the family touch helps account for why Steen’s has survived when so many dairies haven’t. That and the fact that 50 per cent of Steen’s business now comes from processing a significant portion of the milk sold by Organic Meadow, the largest brand of organic milk in Canada. From his home near Orangeville, Steve Cavell, Organic Meadow’s chief executive officer, explains, “Fourteen years ago Fred Steen agreed to do it even though he didn’t really believe in this organic stuff.” Now Steen’s processes millions of litres of milk per year for the company – on a handshake. “There is no contract,” Steve says.

He adds that it’s fitting that Steen’s processes milk from some of the forty-five farms that form Organic Meadow’s organic co-op. “We’re all about small family farms, so it’s consistent for us to be with a small family owned dairy.”

Steen’s doesn’t actually buy any of its raw milk directly from farmers. They get it through contracts with the Dairy Farmers of Ontario, an agency that markets milk on behalf of farmers. But much of it comes from local farmers anyway and is picked up in Steen’s Dairy trucks. “There’s Albert Millis and John McKinnon near Hillsburgh,” Tom says, “and several farmers in Dufferin.”

After the milk has been picked up, homogenized, pasteurized and packaged, the machinery is thoroughly washed down. The sanitation process uses vast amounts of water and the milky waste water is spread on farmland just east of the village in accordance with Ministry of Environment regulations. In fact, from start to finish, dairy production is subject to federal and provincial regulations and inspections that keep the folks at Steen’s hopping. There are regular hoops to jump through in a food business, a factor that is complicated by Steen’s cramped quarters.

Though most people don’t realize it, the 2,200-square-foot dairy is immediately behind the dairy bar on Main Street, on the bank the Credit River. “People have been telling us that we’ve been maxed out for space for twenty years,” says Tom.

The dairy bar doesn’t have a lot of space either. Its fourteen worn, fuchsia vinyl stools line an L-shaped wooden bar that was installed years ago by local carpenter John Longstreet. Wayne Jackson, who happens to be painting the dairy bar’s exterior walls, explains that it was made from a massive piece of “sugar pine.” Almost 13 feet long, it came from a 24-inch-wide board that Erin’s Mundell Lumber once milled. “I’m told,” says Wayne, “that we no longer have sugar pine. It is more yellow than white pine.”

Marie Maltby has mothered the dairy bar since 1976. She says the only changes in thirty years have been a new window, door and some pine wainscotting installed in 1980. Similarly, the quality of Steen’s milkshakes hasn’t changed either. While Marie says she sells a lot of breakfasts, it’s chocolate milkshakes that put Steen’s on the map.

Hesitantly, she tells me that the secret ingredient is their mixture of chocolate and vanilla ice cream, chocolate syrup and real milk. At this, a young man sitting a couple of stools down pipes up, “They’re the best milkshakes I’ve had and they’re a good deal too.” A resident of Mississauga, he explains that he comes to Steen’s all the time with his wife and two kids. “We order four chocolate milkshakes.”

This exchange prompts a gentleman at the end of the bar to raise his chocolate milkshake to catch my attention. From Toronto, he tells me, “We come by here every week in the summertime for a milkshake.”

“If I received ten cents every time someone told me our milkshakes were the best, I could retire,” Marie quips.

Then she offers two young girls sitting next to me, Sadie, 10, and Paige, 6, a treat from her cow-shaped cookie jar. Every kid who cleans up his or her plate receives a treat from Marie’s special cow. It’s one of dozens of china, stuffed and plastic replicas of cows that sit atop the coolers and freezers and line the wainscotting. Marie’s cow collection comes from customers. “They see a cow and they think of me,” she jokes.

Tom has told Marie to treat me to ice cream so I figure I’d better try a chocolate milkshake. Growing up as I did just outside Erin and living in Belfountain, I already know how good they are, but I don’t let on. As Marie spoons in the requisite scoop of chocolate ice cream, she tells me, “You look at the record of how long some people have worked here. It says something about the place.”