Fattening up the Christmas Goose

The birds seem unaware of the fate that awaits them.

I  can just make out the honking of the gaggle of tall embden geese that poke about in the trim grass outside Wendy and Bill Masters’ century brick farmhouse. The birds seem unaware of the fate that awaits them. Several dozen ducks are already packed and frozen, while a hundred laying hens and fifty Christmas turkeys noodle around in large pens.

The couple and their son James, 20, sit bolt upright across from me at a long table that fills the kitchen. They wait expectantly for the interview to begin. I think, man, I have to break the ice here.

So I ask Wendy if she knows about the duck and stone recipe. My ex-mother-in-law from Alberta, I explain, passed it along to me. Wendy shakes her head, still silent, so I push ahead. You prepare the duck, put it in a roasting pan alongside a rock of about the same size. Roast the bird at 350 degrees for an hour, remove it from the oven, throw the duck away and serve the rock to your guests. Bill chuckles before I’ve finished the punch line. Wendy grins, too, but defends her birds, “Duck can be very tasty.” An accomplished cook, she rubs hers with poultry seasoning and an orange, and fills the cavity with celery and onions.

Ice broken, I realize the Masters are no urban refugees offering up boutique-style produce. They are the real McCoy. On their 450-acre mixed farm in East Garafraxa not far from Grand Valley, they grow corn, soybeans, barley, wheat and, says Bill, “lots of hay for horses and cattle.” Along with the free-range geese and free-run turkeys, chickens and ducks, they also raise cattle and pigs and they keep three heavy horses. “What don’t you have?” I ask. “We don’t raise lambs or goats,” Wendy replies earnestly.

The couple met at church in Orangeville about thirty years ago, married, and moved out to East Garafraxa where they live in the farmhouse next door to where Bill grew up and where his father still lives. The only son, Bill eventually took over from his dad, and it appears that James will continue the tradition. Having recently graduated from high school in Orangeville, he is farming full time these days. It’s a set-up that is likely a relief for seventeen-year-old Nathan. Though Bill remains hopeful that his youngest son will take to farming, Wendy says, “His [Nathan’s] first love is photography.” Twenty-two year old Cynthia works in Fergus.

James, a tall and lanky young man, says looking after the cattle is his favourite part of the job. He helps raise about fifteen beef cattle, mostly Simmental/Angus crosses, and their calves. The beef they produce, like everything on the farm, is natural. Bill explains, “We don’t put any hormones or antibiotics in the feed for our livestock.” James hopes to switch to purebred Simmentals because the classes for purebreds at the upcoming Royal Winter Fair are less competitive than for the crossbreeds. James talks animatedly about Stella, his entry. “She’s good,” says James, “even if she isn’t too feminine, but you can’t have everything.” James blushes when I suggest he keep that in mind when he’s looking for a girlfriend.

The Masters’ farm-gate sales of eggs, frozen ducks, geese, turkeys, beef, pork and soup chickens don’t bring in a lot of money. Wendy explains, “It supplements our income.” And Bill adds, “We wouldn’t have so many animals around the farm except for the kids. The kids love it.” And one of the benefits of farm-gate sales: “We meet a lot of people.” 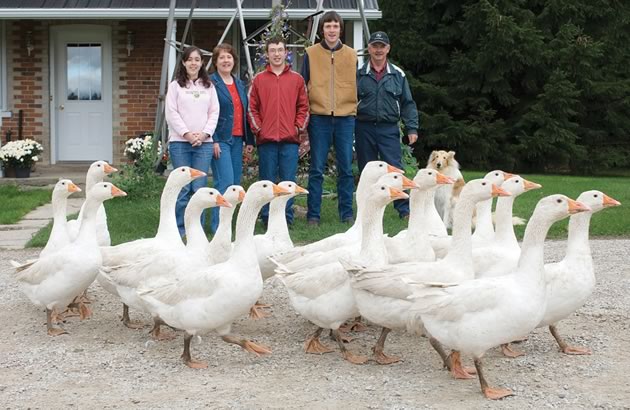 The Masters: Cynthia, Wendy, Nathan, James and Bill – and the geese in happy pre-freezer days.

People like Shelley Black from Orangeville. Shelley met the Masters because their kids attended the same school. She buys chickens, eggs and her Christmas turkey from Knollbrook Farms. How many eggs? She chuckles, thirteen dozen every other week! It turns out she supplies her friends and neighbours with their eggs. Why buy from the farm gate? “I grew up on a farm,” she tells me. “I think the eggs taste better. I know how fresh they are.”

Similarly, Linda Paul is a loyal customer. Even though she moved from Orangeville to Guelph a few years ago, she continues to make the trek to Grand Valley. “I buy capons, turkeys, eggs, beef and pork. It’s all great and the pork hocks are really good for my sauerkraut.” Linda also appreciates the environmental benefits of buying locally. She says, “I was just reading up about the 100-mile diet. It’s really neat that we get our meat locally. It makes us more aware.”

Limited in the number of turkeys and chickens they can raise by Canada’s quota system on eggs and poultry, the Masters sell fifty turkeys each year and produce about eight dozen eggs per day from their hundred laying hens. They have eighteen geese (soon to be placed in a freezer in time for Christmas shoppers) and thirty to forty muskovy and Khaki Campbell ducks that will make fine meals for some people. But not Bill’s sister Barb Davison. “I purchase almost everything from Wendy and Bill,” says Barb, “except duck. I don’t like duck.” I consider offering her my duck and stone recipe, but think better of it. 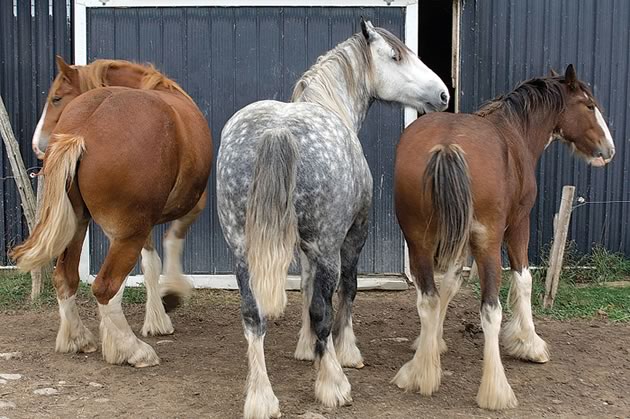 On their 450-acre mixed farm in East Garafraxa not far from Grand Valley, the Masters grow corn, soybeans, barley, wheat and, says Bill, “lots of hay for horses and cattle.”