With the publication of five books in a single year, times are good for writer Hugh Brewster. And with his recent nomination for a Governor General’s Award, the times just got better.

There is an air of excitement when I meet Hugh Brewster in the home he shares with his partner, Phillipp Andres. Brewster has just learned that his book, Carnation, Lily, Lily, Rose, is shortlisted for the 2007 Governor General’s Literary Award in children’s literature. Even the category came as a surprise.

“The other four nominations in this category are text-driven substantial novels,” he explains. Extensively illustrated, Lily was published as a “picture book,” so the nomination for literature is a particular credit to Brewster’s research and writing.

The last twelve months have been a wild ride for the fifty-seven-year-old author. The prestigious nomination caps a year in which he has had an astonishing five books published. Brewster says his life philosophy has been to plant seeds and see what grows. This year’s prodigious output suggests he has cultivated a thriving garden.

Carnation, Lily, Lily, Rose: The Story of a Painting relates young Kate Millet’s experience when artist John Singer Sargent spends two summers in 1885 and 1886 at her family home in England, creating his famous painting. Although Brewster was a fan of Sargent’s paintings, Carnation, Lily, Lily, Rose was not one of his favourites until he attended an exhibition at the Boston Museum of Fine Arts in 1999.

“It was hung and lit so beautifully that the light seemed to come from inside the painting itself,” he remembers. “I suddenly understood what Sargent was doing – trying to capture twilight as well as artificial light.”

The exhibition catalogue said it had been painted in the garden of Frank Millet, a name Brewster recognized from his research on the Titanic. Millet had been one of the doomed passengers. Intrigued by the painting’s provenance, he filed the information in his idea drawer. Eventually the concept of speaking in young Kate’s voice gave the story life. 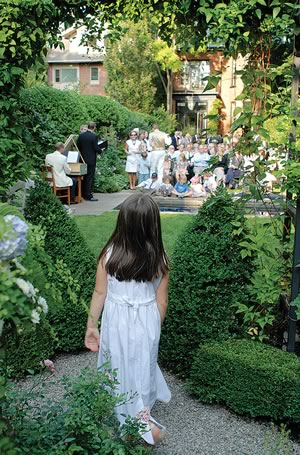 To provide some fanfare for the book, Brewster decided to launch it at a Victorian-style garden party. His friend Brenda Dinnick offered her Rosedale garden and they decided to make the event a fundraiser for Human Rights Watch (Dinnick is the co-chair of the organization’s Toronto committee). Guests paid $100 to attend and, along with tea and a copy of the book, they were treated to a play that Brewster wrote for the occasion, based on the book. Recruiting actors Gwynne Phillips of Mulmur and Kyle Buchanan of Mono, along with other volunteer actor and musician friends, Brewster presented the half-hour play on a sunny mid-September afternoon. “I was totally prepared for disaster, but it was charming,” he recalls.

“If I had just remained a publisher I wouldn’t have experienced any of this,” Brewster says with a hint of regret for not pursuing writing earlier in his career.

Brewster credits his parents’ dislike of television for his early love of books and his eventual decision to study drama and English at the University of Guelph in 1969. He moved to Toronto in 1971 and worked for Scholastic Canada until 1984, the final four years in its New York City office. During this time he helped establish Scholastic’s Canadian book-publishing program.

At the same time, he was working on direct-mail book programs with his friend Al Cummings, who established Madison Press Books in 1979. Brewster eventually worked at Madison as vice-president, editorial director and publisher.

Madison had an early success with the publication of artist Robert Bateman’s first wildlife book – the first art book to top the Canadian best-seller list. A chance meeting with marine scientist Robert Ballard, who later found the remains of the Titanic, gave the business another big boost. Madison Press published a book about the discovery in thirteen countries simultaneously.

Capitalizing on the enormous public interest in the Titanic, Madison went on to publish ten more books on the subject. During the research, Brewster discovered a small storybook that Titanic passenger Daisy Spedden had written for her young son. Told from the viewpoint of Polar, her son’s toy bear, it recounted the family’s true adventures in surviving the Titanic disaster. Despite the story’s tragic setting, Brewster felt Spedden’s story could be the basis for what is known in the trade as a “crossover” book, interesting to children and adults alike. With Laurie McGaw’s award-winning illustrations, the result was the wildly successful Polar, the Titanic Bear (1994). It has now sold 700,000 copies in five languages.

“I was in publishing for twenty-five years before I wrote a book,” Brewster says. In 1996, he stepped in to write the text for Anastasia’s Album, a children’s book about the youngest daughter of Tsar Nicholas II, when the author he had originally hired for the project had to back out. The book went on to win the children’s-choice Silver Birch and Red Cedar awards.

With that success, the genie was out of the bottle and Brewster’s writing career took flight. Anastasia’s Album was followed by Inside the Titanic (1997), 882-½ Amazing Answers to Your Questions about the Titanic (1998), To be a Princess (2001), again illustrated by Laurie McGaw, and On Juno Beach (2004).

Brewster’s particular genius lies in making historical events engaging for children – and their parents – through a kind of literary docudrama that combines fascinating factual details with fictional recreation and a blend of historic and contemporary illustration and photography.

In 2004, Brewster left Madison Press and, with a file of ideas, headed to New York. “Usually you have five ideas and one or two of them sell, but virtually everything sold and suddenly I was really busy,” he says.

Busy indeed. It might seem that he has become a writing machine, churning out volume after volume, but it is coincidence that the culmination of years of research and months of production has brought this year’s five titles to the public all at once.

Following the success of On Juno Beach, Brewster researched his second war story and launched At Vimy Ridge: Canada’s Greatest World War I Victory in late 2006. This illustrated journey from 1914 to 1917 includes archival maps, photographs and artifacts, some belonging to Nan Jemmett of Orangeville, whose father was a stretcher-bearer at Vimy.

Despite his anti-war sentiments, Brewster is increasingly called “the military guy,” a label he dislikes. “We’re all children of the twentieth century,” he says, “Now that we’re beyond that century we look back and see a history dominated by two horrendous wars.”

At Vimy Ridge is a finalist for the 2007 Children’s Literature Roundtables of Canada Information Book Award (an award won by On Juno Beach in 2004).

Brewster’s radar is continually on the alert for potential story ideas. For The Other Mozart: The Life of the Famous Chevalier de Saint-George, published last December, hearing the little-known, eighteenth-century composer’s music on the radio served as catalyst.

“Shortly after I heard his music I saw a program about “Le Mozart Noir” and right away I thought it was a story that might interest young readers,” Brewster says.

The book tells of Joseph Bologne, who overcomes the social stigma of being a black slave’s child to become a virtuoso violinist, composer and conductor and an accepted member of the Parisian aristocracy. Interlaced with historical sidebars and timelines, Joseph’s story makes for fascinating reading.

As if Brewster didn’t have enough on his plate researching music, art and war, the dinosaur book “just came along.” And he jumped at the opportunity. “You can always sell a dinosaur book,” he says with a smile.

Written with guidance from the Royal Ontario Museum curators, Breakout Dinosaurs will be formally launched at the ROM when the James and Louise Temerty Galleries of the Age of Dinosaurs opens in December.

“I spent several years researching the dinosaur book,” says Brewster. “The curators were strict about not including information that new studies might question, so some of my juiciest stuff had to be removed. Nonetheless, they pointed me to the very latest articles and I found some brand new information.”

Brewster designs and compiles most of his books through his company, Whitfield Editions, named for the pioneer village near his home in Mulmur, handing them off to a publisher either on disk or already in the printed form. For Breakout Dinosaurs, he is also the publisher.

The final book in this year’s extraordinary quintet is Sisters in Two Worlds, a biography of Canadian pioneer writers Catharine Parr Traill and Susanna Moodie. Unlike his other recent books, Sisters is an adult book rich with images both past and present that follows the sisters’ lives as they journey from England to Upper Canada’s backwoods.

Also, although Brewster conceived, compiled and edited the book, he is not the author. He was well into its development and had travelled to England with his nephew, photographer Ian Brewster, to research and document the sisters’ history, when he met Michael Peterman, an expert on the sisters, and asked him to write the text. “The book was a real collaboration – as most books are,” says Brewster.

One might suppose that Hugh Brewster is ready for a long relaxing holiday, but he eagerly discusses an upcoming picture book on Dieppe and his preliminary thoughts on another about Grosse-Île, and the immigrants once quarantined there.

Brewster’s university drama background no doubt contributes to his ability to effectively “set the stage” in his books. Like a play unfolding I read the text, experience the photographs, images and archival information, captivated until the final page when my first impulse is to stand up and applaud.