In the summer of 1892, Alton hosted a weekend party for travelling salesmen that was so successful it became an annual affair. By 1909 it outgrew the village and relocated to Erin. Until World War I, the annual “Drummers’ Snack” attracted attention across Canada.

Getting to Alton by rail was not all that easy in 1892, even though the village had two train stations. The Credit Valley depot was half a kilometre outside of town and the Toronto Grey & Bruce even farther. However, that did not deter some fifty “drummers,” commercial travellers, who disembarked at the TG&B station on the afternoon of July 30th. For once the walk to town was not going to be the usual lonely, dusty trudge. This time the Alton Citizens Band was there to greet them, along with half the village. There was going to be a party and they were the guests of honour!

The previous summer, coincidence had brought a group of these travelling salesmen together in Alton. As was customary, they were swapping road stories and sharing sales tips when, perhaps bolstered by some strong ale at the Dixie House, someone came up with the idea of holding an annual get-together. Similar proposals had been bandied about before, but this group had the good fortune to be discussing the notion in the presence of one of Alton’s – indeed Ontario’s – truly amazing entrepreneurs: William Algie. Under the guidance of this intrepid businessman/intellectual, what had begun as idle beer-table chatter became, in the following year, the first annual “Drummers’ Snack”: a celebration of travelling salesmen

There’s no doubt it was an unusual idea. Most commercial travellers were representatives of large companies; some were peddlers toting huge suitcases of goods for on-the-spot sales; a few were out and out hucksters. And all of them, because of their profession, were regarded with some suspicion. Yet Algie and the people of Alton obviously appreciated the contribution these salesmen made in keeping small rural towns connected with the world. That sentiment made the first Snack such a success that the Toronto Globe ran a full-page story about it, and the wire services sent the story around the country.

Although the original intent may have been to make the Drummers’ Snack a trade fair, it didn’t turn out that way. By the time organizers squeezed in band concerts, baseball games, dances, speeches, masquerades, parades, track and field events and a picnic, there was no time left to sell anything!

But if there was any doubt after that first party that everyone wanted things to continue the same way, it was dispelled as the weekend drew to a close. Even as Alton’s band marched the drummers back to the station, along with the entire village, the travellers established a committee to organize the Drummers’ Snack in 1893 and beyond. And so, for the next two decades, the affair continued as it began: a weekend party.

If only because of the national publicity, it was inevitable the event would eventually outgrow Alton, even though the whole village and neighbouring farmers from every direction pitched in. Alton had five hotels, but they were not enough to accommodate the throng.

Providing food and drink was also a huge challenge. In 1892, a makeshift outdoor kitchen, nicknamed the “Cyclone Cellar,” was set up by Mrs. Algie and fed over 400 people. The Kuntz Brewery from Waterloo donated five kegs of beer that, according to the Orangeville Sun, was “duly appreciated.”

However, even free beer and a makeshift kitchen were not up to the expanding crowd, a point underlined in 1909, the first year the Snack was held in Erin’s Stanley Park. That year, the Friday night crowd numbered 2,500 and that number almost doubled by Saturday afternoon. 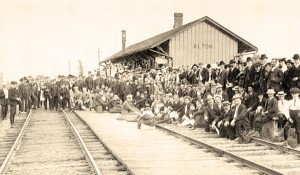 On that opening Friday, Erin’s citizens were out in force at the train station to meet the arriving drummers. Many came with their families, for by now the inclusion of wives and children had become part of the tradition. Although Erin was a larger community, like Alton it did not have enough hotels, so billeting in private homes was common. But Stanley Park was a wonderful locale, a great natural room with space for mingling, field events, games, boating, swimming, horse-tethering and a giant tent to accommodate crowds for eating and the inevitable speechifying.

What Stanley Park made possible, in a manner that Alton couldn’t, was to fill hungry mouths. On that first Friday night, park manager Teeter provided a quick buffet-style bite for over a thousand people before the official opening. Four hours later a banquet was served to two thousand revellers!

Still, the style established in Alton remained firm. Friday night was devoted to speeches and entertainment. After Erin’s Dr. Hamilton officially opened the affair and welcomed everyone, he introduced the president of the travellers’ group, R. M. Asher of Toronto, who rose to say that this was really not the time for lengthy speeches and then spoke for nearly an hour. The highlight of his address was the presentation of a gold-headed cane to William Algie and a gold-handled umbrella to Mrs. Algie, along with fulsome praise for their role in establishing the Drummers’ Snack as a worthy annual event.

On Saturday, Stanley Park hummed with activity and competitions for all comers. They included such events as the Comfort Soap Foot Race, “open to all ladies married and marriageable,” broom hockey, indoor baseball, ladies’ tug-of-war and even a “barnyard race” in which (married couples only) chased live chickens.

For those who did not compete there was all the pretty park had to offer and even horse racing at the Erin Turf Club. No shopping, however, at this gathering of salesmen. Ironically, just as in Alton, the stores in Erin closed so the merchants could join the party.

It was a weary but well-satisfied crowd – that made its way to the train station at 6 p.m. that Saturday – led by the Alton Citizens Band. On the steps of a passenger car, the newly elected president, Ray Hill, turned and shouted a grand thanks to the people of Erin and promised the drummers would return next year.

And indeed they did, and each year thereafter until in 1914 a different drummer, beating the call of war, sounded the beginning of the end for one of the best annual parties these hills have ever seen. 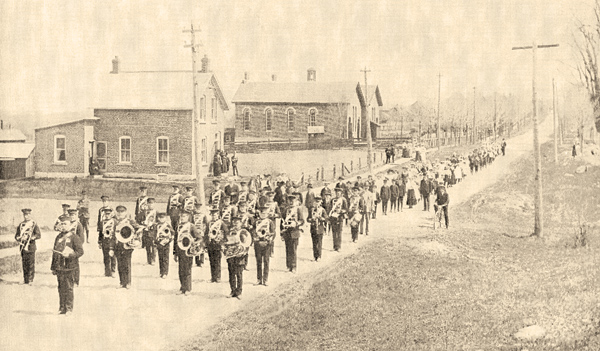 Comment in the Erin Advocate following the 19o9 Drummers’ Snack suggests the people of Erin were truly sad to see their guests leave, for many stores and houses left their flags and bunting in place for days after. Such response suggests that the drummers and their families were well behaved. “We did not see a drunken man on the grounds,” observed the Advocate (although the paper did wonder who rang the park bell at 6 a.m. on Saturday morning).

On being a “drummer”

Before the days of automobile travel, the suspicion of outsiders and hucksters with which people in rural towns sometimes looked on commercial travellers was often tinged with more than a little envy. The salesmen were mobile, had seen a great deal, and appeared to be worldly wise. The truth was that a typical drummer was on the road so much that his personal life frequently suffered. Often called “Knights of the Trunk and Grip” because of the great load of samples they carried, drummers led lonely lives dictated by sales quotas, train schedules, unproductive sales calls and weariness. The now-archaic word “drummer” is believed to have developed from the phrase “beating the drum” for something, as a salesman would do for his product.

Caledon writer Ken Weber’s best-selling Five Minute Mysteries series is published in 22 languages. Ken is also the Historic Hills columnist and puzzle meister for this magazine and has a loyal following here in the hills.
Show 2 Comments