Screaming headlines in Toronto newspapers turned an 1897 trial in Shelburne into a Canada-wide sensation, painting Melancthon as a hotbed of arson, fraud, perjury and intimidation.

In the 189os, Toronto had seven newspapers fighting for readership (and news) in a city of under 2oo,ooo. So it was no wonder reporters swarmed en masse into Shelburne in January, 1897, to cover a trial that promised to be a media dream.

Five Melancthon Township farmers had been charged with a crime wave of arson, insurance fraud and perjury in what the papers described as a campaign of terror. Although the fires had been limited to a few concessions, the Toronto News declared the entire township had become a “Sodom and Gomorrah.”

Not to be outdone, competing papers reported (wrongly) that insurance companies would no longer offer policies in Melancthon and claimed (also incorrectly) that nobody could buy or sell land there any more.

Toronto’s Evening Star ran stories headed “That Melancthon Gang” and “Firebugs Who Grew Rich,” while a Globe headline trumpeted, “A Black Record” (a thinly disguised racist pun, for the two principal “firebugs” were of mixed race). In every city newspaper the trial was front page material and within days, wire services had spread the news across the country. Melancthon Township was suddenly notorious.

What caused the excitement?

A string of unusual fires began in 1889 when James Ballard’s house on the 1st Concession burned to the ground while he was off in Dundalk getting married. The fire roused no suspicions, but a month later his barn burned down too. Both buildings were fully insured. Then in 1891, James’ brother David, just down the road, lost his barn to fire. In 1892 it burned down again. And again in 1893. And in 1894!

When the Ballards found it difficult to get any more insurance, the blazes spread to other properties. As the Globe put it, the brothers expanded their arson enterprise into a gang affair by hooking up with other “vicious and contemptible specimens of humanity.” 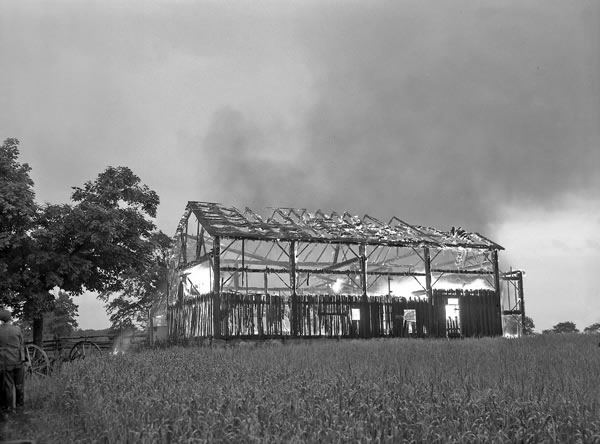 On January 6, 1897, Fenton’s barn caught fire and his son was killed when the roof collapsed on him.Photo Courtesy Region Of Peel Archives

There had indeed been a lot of fires. At the time of their arrest, the five accused were identified with no less than thirty-five different blazes, some set for the insurance, and some, allegedly, simply to spread terror. The situation had become a nightmare that might have gone on indefinitely were it not for Edward Fenton.

Testimony at the trial makes clear that local citizens had no doubt about who was behind the fires, but they nervously backed away from confrontation. Not Edward Fenton. He had the temerity to sue the Ballards for a debt they owed him.

Fenton won his case easily; however, almost immediately afterward, on January 6, 1897, Fenton’s barn caught fire and his son was killed when the roof collapsed on him. A coroner’s inquest determined that the barn was definitely torched yet no criminal charges were laid and no one was formally accused.

However, this time the sad death of Fenton’s son mobilized a response. A detective was summoned from the provincial attorney-general’s office. He joined forces with suddenly awakened officials of the insurance industry.

Within a week, following a cartload of tips from the community, the Ballard brothers, along with Alonzo Smith, James Corbett and Wm. Reid, found themselves in the Orangeville jail, arrested for arson and fraud.

For the Crown, the case was going to be a slam dunk. In addition to a big slate of local witnesses, gang member Hamilton Tisdale plea-bargained and agreed to confess everything. In the Toronto papers, his testimony confirmed the “Sodom and Gomorrah” image.

Why so hard on Melancthon? 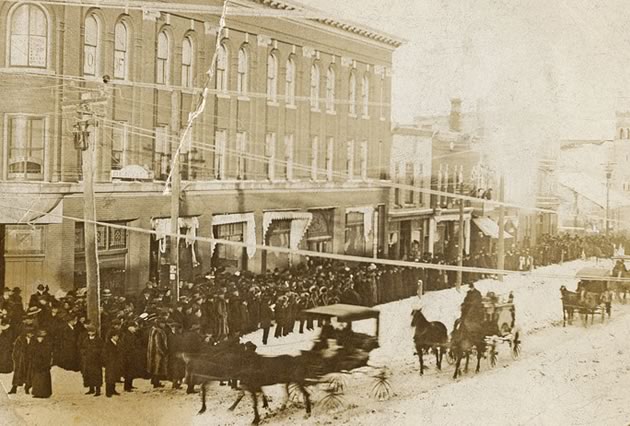 Shelburne’s Berwick and Hannah Blocks were gutted by fire as the Melancthon arsonists went to trial. Photo Courtesy Dufferin County Museum And Archives.

In part, it was a matter of unfortunate timing. Toronto not only had too many newspapers and not enough news, the 189os were a time when “yellow journalism,” popularized by the Hearst chain in the U.S., reigned supreme. The opportunity to sensationalize a wave of arson in a rural township was too much to resist.

It didn’t help Melancthon Township that events in Orangeville, just to the south, had already given Dufferin County something of a reputation for attracting firebugs. In the 188os the Orangeville Advertiser building, whose owner was a high profile temperance advocate, had been attacked by arsonists. In 187o, a huge fire which took out a whole block was attributed to incendiaries. In May of 1891, the town fire hall itself went down, allegedly at the hands of an arsonist!

And, as if Melancthon didn’t have enough bad luck, at the very time the five accused were being arraigned in Shelburne, much of the town’s main street was gutted by a disastrous blaze that became known as the Hannah-Berwick Fire, after the owners of the damaged buildings. For city reporters on hand to cover the trial, the opportunity – and the irony – was overwhelming.

But even without those additional events, there was enough juice in the trial to make it a gift to reporters. Witness after witness made it obvious that the arson wave had been going on for a long time and involved significantly more people than the five accused.

Particularly shocking was how little the gang, especially the Ballards, bothered to conceal their activities. One witness told how James Ballard noticed a barn fire at a neighbouring farm, shouted “Away she goes!” and then announced that he had an interest inside the burning barn: a broken-down threshing machine that he had recently insured.

Others testified that the Ballards gave advice quite freely, such as that “a candle in a barrel will burn one inch an hour” and that a slice of tree stump would smolder for hours, so an arsonist could be well away from a site when it went up.

Still other witnesses described how the gang had tried to recruit them, not as hands-on arsonists but as co-beneficiaries of insurance coverage. All they had to do was offer a building and share the insurance as, according to testimony, James Corbett did in October, 1892. After carefully insuring his house he moved his furniture out one afternoon and that night the house burned down.

Although the papers really pushed the country-bumpkin image – Alonzo Smith was reported to have taken out insurance and burned down his house on the same day – the real bumpkins may well have been the insurance companies.

Adjuster George Forsyth testified he did not become suspicious of David Ballard until his barn burned for the fourth time in four years – each time covered by a different company. And no one seemed to find it odd that the same contents seemed to be lost in each fire. Several barns went down, for example, with a well-insured hay mower inside, and each time the mower was strikingly similar to the one burned just previously.

One item that intrigued reporters was a parlour organ that David Ballard had bought in Shelburne and that supposedly burned up in two different house fires (with the claim paid each time), yet was available – in perfect condition – as a Crown exhibit at the trial!

Fortunately for Melancthon, as testimony piled up, the newspapers gradually made clear that the small group of arsonists, the gang, was not representative of the township’s population. The community and the press together expressed great satisfaction when the jury found the perpetrators guilty. The Ballards and Smith were sentenced to twelve years, and Reid and Corbett to eight.

Weeks after the trial, when the five prisoners passed through Toronto en route to the penitentiary in Kingston, the city’s front pages noted their journey with a lurid review of arson, evil, and the firm hand of justice. This time, however, Melancthon Township was barely even mentioned. 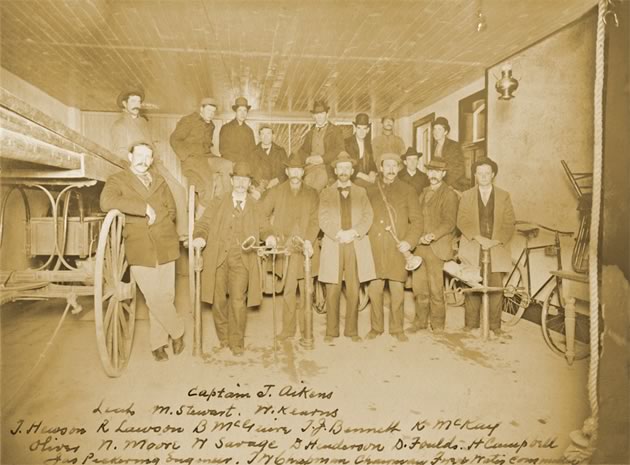 Orangeville Fire Department poses in their “civvies” with their equipment in 1896. Photo Courtesy Dufferin County Museum And Archives.

Before the days of strict building codes and modern firefighting, huge blazes were so frequent that the Toronto Globe ran a regular column called “The Fire Record,” a point form summary of Ontario’s biggest and most recent fires. On January 28, 1897, when this column reported Shelburne’s Hannah-Berwick fire, it also listed large, multiple-building fires in Gatineau Point, in Kingston and in the Grey County village of Maxwell. All four of them occurred on the same day.

Out in the country, farmers in the 189os were pretty much on their own if a building started to burn, but most communities of size here in the hills had volunteer fire brigades. Equipment often included a hand-pulled or horse-drawn pumper (some pumps were steam-powered) and a hose and ladder wagon. Some brigades, like Shelburne’s, had a “chemical engine,” rather like a huge extinguisher on wheels. A month after the Hannah-Berwick fire, Shelburne’s brigade was reorganized to include six officers, six nozzlemen, eight laddermen, five axemen, ten branchmen, four wrenchmen, three hydrantmen and two chamber chargers.