Art by the country mile

The Hills of Erin Studio Tour has grown more sophisticated over the past 20 years, but it’s still the perfect excuse for a casual drive in the fall countryside. 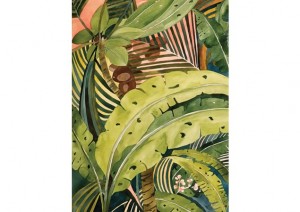 Evolution. The word coils through a conversation with artists Susan Powell and Monica O’Halloran-Schut. They’re talking about the evolution of individual artists and the evolution of the Hills of Erin Studio Tour, which celebrates twenty years this September.

Back in 1988 that first studio tour relied heavily on farm and garden themes, Monica recalls. “There were five locations and six artists, and an attendance of about eighty people.”

Of the six artists in that original tour, Monica, Rosalinde Baumgartner and Jim Reed, will be participating in this year’s tour.

“Rosalinde was doing prints at the time,” Monica says, “then she went back to painting and now she is doing bronze sculptures.” That kind of continual evolution is an essential element of artistic longevity and a key reason people return to view the artists’ work year after year.

Monica’s own sculptural work has shifted over the years to explorations with silver and semi-precious materials. Susan Powell, who has been with the tour five years, has also been experimenting with a new body of work. Deeply affected by a recent trip to Costa Rica, her work has moved from small Niagara Escarpment landscapes to large watercolours depicting lush tropical rainforests. “The paintings make you feel that you are sitting right there in the middle of a hot humid day,” Monica says.

The tour itself has also evolved from the early days and is now one of Ontario’s longest running studio tours, boasting an attendance of over 500 in 2007. This year thirty-seven artists will be at seventeen locations and, with the high price of gas in mind, those locations are grouped more closely than in the past, with hubs in the villages of Erin and Hillsburgh, and at the Burdette Gallery near Orton. 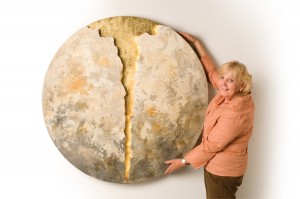 Monica O’Halloran-Schut with River of Life, a piece she recently completed for an American couple. They had seen a smaller, earlier version of the piece and commissioned the larger version for their Seattle home. Monica created the work on a base of building insulation, with the surface rendered in acrylic stucco combined with marble dust, sand, mica, iron and other minerals. The central “river” is in gold leaf. Photo by Pete Paterson.

“We want people to be able to do a cursory drive of the locations and have time to come back and speak with the artists,” Monica says. Those conversations are what really thrill the artists – intimate conversations about the work, about the process, the inspiration behind the work, and its effect on the viewer. Monica also admits that visitors enjoy taking a peek into artists’ homes, seeing how they live and the environment that nurtures their creativity.

The tour runs for two days, allowing time to stop for lunch and continue on at leisure. Increasingly people are carpooling from throughout Ontario, spending the night in local inns and finishing the tour the second day.

“We’ve always encouraged a huge diversity of artists,” Susan Powell says. “We want to represent the extent of what is going on in the community.” Nineteen of the artists are area residents. Unlike many studio tours, with their emphasis on the fine arts of painting and sculpture, the Erin tour features many “old crafts,” including pottery, weaving, basketry, bookbinding and metalworking, providing an opportunity for the next generation to see such crafts taken to new artistic levels.

About a third of the thirty-seven artists are new to the tour this year. Sometimes an artist immersed in his or her work might not have the time to commit to the tour and artists come and go throughout the years depending on their circumstances. This year, for the first time, so many artists applied that the jury had to turn some away.

“Quality, of course, is important, but inventory is also important,” Monica says. “Some artists might have only a few pieces to display, so we encourage them to apply again next year.”

For wood-turner Jennifer McKinnon of Hillsburgh, the studio tour represents her first major public exposure. Four years ago she inherited her father’s lathe and, with her love of wood, she says, experimentation with wood-turning “was a natural progression.” Beech, birch, elm and maple on her property provide the raw material for her functional art objects. In the rural setting, Jennifer says, “it’s easy to find your creativity and the environment makes you less afraid to fail when you choose to do things that aren’t mainstream.”

Glass-blower Arron Lowe, 34, also joins this year’s tour for the first time. Originally from Erin, his mother is long-time resident Audrey Devonshire, owner of Tintagel’s Tea Room and Minerva’s Spa & Boutique. Arron is a graduate of Sheridan College’s School of Crafts and Design and is currently concluding a three-year residency program at the Harbourfront Centre Glass Studio. 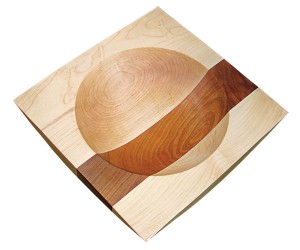 Jennifer McKinnon ~ Capturing the Round

The future is this talented artist’s oyster and he hopes to move on to an international destination, “anywhere where there is access to a studio facility,” he says. But the hills of Erin also beckon and he considers some day settling his studio in this peaceful area. “It’s something about the trees,” he says of the draw back home.

The Burdette Gallery will be host to six tour artists. “The gallery represents many area artists and we benefit by collaborating as partners of sorts,” Susan says. This year’s tour happily coincides with the beginning of the Headwaters Arts Festival. The gallery will also feature an exhibition of works by gallery founder Paul Burdette, who will also receive a lifetime achievement award at the Friday night launch of the Festival Art Show at Alton’s SGI Centre.

In addition to young artists, the Erin tour is now attracting career artists who are represented by galleries and have their own studio space. “These full-time artists have decided that this is the kind of tour they want to be on,” Susan says.

The evolving sophistication of the Erin tour is in part a response to the changing market. “The public is becoming savvy, with a discerning eye for art and an increasing demand for handmade, well-made, environmentally sensitive Canadian products,” Monica says.

“We are maturing as artists and learning how to market our work with intention and integrity and this collaborative allows us new opportunities to present ourselves. We are on the edge of launching ourselves,” Monica says. And then she allows herself a little enthusiastic speculation: “If we do this right and engage partners in other disciplines, we may get to real ‘mortar and bricks’ – a performing arts theatre/gallery – some time in the not-too-distant future.”

Monica O’Halloran-Schut with River of Life, a piece she recently completed for an American couple. They had seen a smaller, earlier version of the piece and commissioned the larger version for their Seattle home. Monica created the work on a base of building insulation, with the surface rendered in acrylic stucco combined with marble dust, sand, mica, iron and other minerals. The central “river” is in gold leaf. Photo by Pete Paterson.

Jennifer McKinnon ~ The Elm Lives On

Jennifer McKinnon ~ Capturing the Round