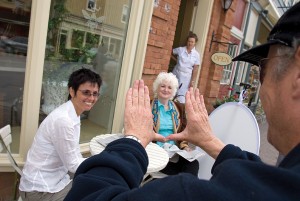 Director John Redfern sizes up a shot of Anita Lauer and Catherine Gildiner outside Creemore’s Bank Café as they prepare to film their entry in this year’s mock documentary festival. The group won the grand prize at last year’s festival with a film called It’s So Country – and they are hoping to repeat their success. Photos by M.K. Lynde.

The streets of Creemore are quiet on this weekday morning in July. The sky is overcast and a light breeze toys with the awning above the front window of the pharmacy. A trio of autograph seekers whisper together in the doorway of the Bank Café. As long as it doesn’t rain, it is a perfect day for shooting a movie. I am on the set with Turtle Pond Productions as the cast and crew prepare for their first day of filming. This is director Jon Redfern’s second movie project. His first, a five-minute mock documentary, or mockumentary, entitled It’s So Country, about the misadventures of two city slickers buying a farm, won the prestigious grand prize at last year’s second annual Creemore Mocks! film festival. Redfern and his team, which includes writer, editor, actor Anita Lauer, and producer, writer, actor Catherine Gildiner, are anxious to repeat last season’s stellar performance.

When I ask Redfern what his mock doc is about this year, he glances furtively at the cluster of curious residents gathering on the sidewalk. “We are not going to divulge the plot,” he says in an indignant whisper. “It is absolutely embargoed.” Then he lowers his sunglasses over his eyes, and tugs at his cap. “Quiet on the set,” he roars, raising his video camera and pointing it at the actors. “Ready. Action. Rolling.” Lauer and Gildiner, who are sitting at a table outside the café, mime an animated conversation until Redfern finally calls “Cut.”

“Why are they drinking beer at 8:30 in the morning?” I ask Redfern once the scene is wrapped and the actors are taking a break to retouch their makeup.

“Well,” he explains, “the script originally called for cappuccino, but then we found out about the Froth Quaffer’s prize.”

Turns out that Creemore Springs Brewery, which sponsors Creemore Mocks! has donated a special prize (one night at a local B&B and dinner at Chez Michel) to the best film depicting one of its frothy products. The grand prize, donated by Chestnut Park Realty, is $500. Second prize of $473 (that’s how many millilitres there are in a can of beer) comes from the brewery, and third prize of $300 has been donated by the Creemore Echo. This year, for the first time, Humber College’s School of Media Studies is also donating a $500 student prize.

The prizes will be awarded at the October 18 Festival Gala at Creemore’s Station on the Green. Only 200 tickets will be sold to what is undoubtedly the social and cultural event of the season in Creemore and surrounding area. Last year’s Creemore Mocks! gala sold out well in advance and organizers were forced to turn away legions of disappointed film buffs from the standing-room only party.

Their lips freshly painted and cheeks rouged, Gildiner and Lauer are ready for another take. Redfern asks the owner of an SUV parked on the street to move it so that he can get some long shots of the café scene. More villagers crowd around the set to watch the actors at work; today’s shoot is a major event in a town this small.

It isn’t often that Creemore is the site of a feature film. Indeed, the last time the village was invaded by camera crews, it resulted in the blowing up of the veterinary clinic by a bunch of werewolves. Two years later when the movie, Skinwalkers, was released, it flew off the shelves of area video stores. Creemorites love to be in pictures.

So the stakes are high this year, and the competition is keen. A rumour is circulating around town that Corey Finkelstein’s mock doc is already in the can. Finkelstein, a local graphic artist, took the People’s Choice Award at last year’s festival. As well, the talented crew led by photographer M.K. Lynde, which won two years ago with a clever spoof about piping Creemore Springs beer directly into village homes, is sure to be in the running again this year.

In fact, there were a total of fifteen entries in the 2007 festival, up from six the year before. “People enjoyed it so much the first year that we had a lot more who were ready to try their hand,” says event co-ordinator Sara Hershoff. A two-time winner with Lynde and massage therapist Laura Yates, Hershoff is taking this year off from entering to organize Creemore Mocks!

Hershoff defines a mockumentary as “a satirical look at anything filmed in a documentary format.” She admits that the category is “completely wide open,” but adds, “We want people to come forward with their stories and we want them to be funny.”

Hershoff insists that anyone can make a short film and that part of the festival’s mandate is to help people master the new media. “Three years ago, we had to explain what YouTube is. Now it’s ubiquitous.” The only rule is that each mock doc can be no more than five minutes and no less than thirty seconds in length. There is no entry fee and the deadline for entries is Saturday, October 11. Tickets to the October 18 evening gala, which will feature the top ten mock docs, are $20; they go on sale – and they go fast – September 20 at the Creemore farmers’ market and the Curiosity House Bookstore.

This year’s Creemore Mocks! will be a day-long festival that includes a free screening of all the entries in the afternoon so that everyone will have a chance to see the films – and to vote on their favourite for the People’s Choice Award.

Prior to the festival, two workshops will be held in September to help aspiring mockumentary makers get started. The first, on September 13, features Durham-area filmmaker Myke Dyer, who will teach the basic building blocks of filmmaking: shooting, audio, story boarding, plot and character. On September 21, an instructor from Humber College’s film school will conduct a hands-on editing workshop showing participants how to master the latest software programs. (The workshops are just $15 each, $25 if you sign up for both).

“Even if you’re not planning to enter the festival,” says Hershoff, “any amateur videographer will find these classes helpful.”

But, she insists, why not enter, even if it’s just for the fun of it. Who knows? Those home movies of dad falling off a horse might just bring the house down. In any case, all entrants are invited to a VIP reception at the brewery and they get free admission to the gala screening.

“It’s a fabulous party,” says Hershoff. Steven Thomas, artistic director of Theatre Collingwood, will act as emcee, and The Funky Truths, who Hershoff describes as “a fun bar band” made up of three area musicians, will have everyone dancing in the aisles.

Organizers have added several non-monetary prize categories, such as best actor and best screenplay. All winners will take home a Mocksie statuette designed by area sculptor Ralph Hicks, who was inspired by the spontaneous beauty of crushed beer cans. Hicks has since dubbed Creemore Mocks!: “the original Cans film festival.”

Back at Creemore’s Bank Café, the Turtle Pond crew has packed it in for the day and are winding down with a soothing latte. Tired after a long morning on the set, they are having a crisis of confidence. Maybe their idea isn’t so great after all? Maybe the ending needs rewriting? Or should they just start over again? Wearily, they discuss the task ahead.

“We’ll have to shoot about forty-five minutes of film altogether,” says Lauer, who learned to edit in I-Movie when she was making last year’s winning mock doc.

“It takes me two whole days and we end up with two to three minutes we can use.”

“Anita edits and I sit with her,” says Redfern.

“You wouldn’t let me come to the editing sessions,” says Gildiner.

“Too many editors spoil the movie,” chirps Redfern.

“Yeah, but you edited out all the funny bits – with me in them.”

Gildiner pouts and sips her coffee. “Anyway,” she continues, “I think the chances are slim that they will give the prize to the same people two years in a row.”

Her expression is downcast. Then she brightens. “Oh, who cares! We have so much fun. We laugh our heads off. We spend all year trying to come up with fresh ideas. All these people,” she gestures toward her friends – Sara, M.K., Laura – sitting at nearby tables. “I wouldn’t have met any of them if it hadn’t been for Creemore Mocks!”

Check out some of the film clips on You Tube: www.youtube.com/user/creemoremocks