A memoir by Jesse Rivers. Every day was marked by two hours and twenty minutes of terror that one of these untamed big kids might move forward, as they did on occasion, to terrorize the cowering young.

After school, the bright yellow bus ran its route in reverse. In the morning, my brother and I were the third stop on a circuitous, hour-and-ten-minute tour through the countryside: navigating snowdrifts and huddling around the too-small heater in the winter; fresh pollen, dust and impatience floating through the gaping windows in the spring. After school, we were the third-last to be dropped off.

Two hours and twenty minutes every day. One hundred and forty minutes of martyrdom five days a week.

Tradition dictated that the older you were, the closer to the back of the bus you sat. In the early days of elementary school, I remember looking – furtive glances really – toward the back of the bus in much the same way as I might now look into a bear’s den. Giants, loud, brash and unfazed by the driver’s supreme authority, lurked back there like so many gorillas angrily leaping around a cage. Every day was marked by two hours and twenty minutes of terror that one of these untamed big kids might move forward, as they did on occasion, to terrorize the cowering young.

As the years passed, the space diminished – both the age gap and the physical proximity. My middle years were spent with a seat in both worlds; too old to huddle in the safe pack of young so near the driver, but not yet old enough to join the ranks of the aged. In the morning, I knew which seat to take, by this time somewhere in the middle, based on how far forward the older kids were willing to push. Two hours and twenty minutes of uncertainty. A bop in the back of the head, a spitball in the ear that pride dictated I must pretend had missed the mark.

But on the trip home, as the years brought me to early high school, I remember the first faint realizations that one day, just maybe, I would become one of the big kids. The sole advantage of being the third-last to be dropped off, the lonely consolation prize, was that toward the end of the trip, in the last fifteen minutes or so, most of the big kids had disappeared. It was then, nervous at first, that a daring young soul could take his first tentative steps toward the back and, if only briefly, defy the disorderly conventions and take command of the bus. Two hours and five minutes of waiting. Fifteen minutes of big-kiddom a day.

The dusty sideroads hadn’t changed much by the time I’d shifted fully to that back seat. But the ruts, potholes, drifting snow and distance from the heater were felt much more keenly. Slogging through Grade 12 and yet-to-be-abolished Grade 13, unable to afford a car, I found the rides interminable. Yet another year. Suddenly, we frightened the younger kids. We tormented the poor, harried drivers. And we smugly shrugged when asked who’d thrown the sandwich.

Two hours and twenty minutes of eternity. A ride that, for fourteen years, had seemed as if it would never end. Day in, day out. An odyssey of repetition for which the only reward, or so it felt, was the much coveted seat at the back of the bus. How many days, I wondered, had my hair, fresh out of the shower, frozen solid to the top of my head as I waited by the stop sign? How much life with my friends, valuable TV time, after-school sports had I given up to sit in those red, brittle plastic seats? How much more could I have done if only a fraction of those two hours and twenty minutes a day could be returned to me? All those hours wasted listening to my Walkman, speculating idly about “the game,” the class field trip, the girl who lived up the road.

Then one day, September came and I didn’t go to meet the bus. The day after Labour Day arrived and instead of hurrying up to the corner of a gravel road anxious to see friends after a two-month hiatus, I found myself driving past school buses on the way to work. I’d moved so far from the front of the bus, it seemed, that I’d tumbled right out the back into the real world.

And today, after a few more years and having moved more seats behind the driver than I care to think about, the kids on the bus are as foreign to me as they were to the terrified five-year-old on his way to kindergarten. Months have sped up. Years are no longer an eternity. But, if I’ve learned one thing since then, if the real world has shown me anything, it’s that I would enjoy nothing more than having two hours and twenty minutes every day to do whatever I felt like: to chat with neighbours, to listen to a Walkman, to argue about the hockey game or, maybe, to think about the girl who lives up the road.

About the Author More by Jesse Rivers

Jesse Rivers rode the bright yellow bus in Erin during the 1980s and 1990s and, after earning a BA in philosophy at Queen’s University, went on to a career as a mariner. He is now putting his philosophy skills to work as mate on a yacht somewhere in the Caribbean. 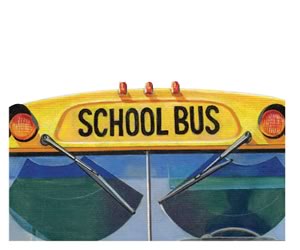 The school bus industry is going global, but the safety of our children still depends on the steel nerves and good sense of the local drivers.