It is difficult to know when enough is enough with a collection. But when it has taken over every available shelf, countertop and dresser, it could be time to re-evaluate.

More than any other season, Christmas seems to bring out the hunter-gatherer in my family.

It is, of course, the season when we pull out the holiday china, platters, reindeers, wreaths, candleholders and other assorted decorations that have become family traditions. But for my mother and me, there were also the “special” collections. Every year, in late November, we would start asking each other if we had them out yet – her specialty was nutcrackers and mine Santas.

My mother was a collector by nature – stamps, coins, eggs, plates, mini-books, elephants, china shoes. It always started out innocently enough: the purchase of an interesting or beautiful object, and then perhaps another to make a pair. With the addition of a third, however, it became a full-blown collection and there was no stopping her.

As for me, it was obvious early on that I’d inherited a bit of my mother’s collector gene.

As a child I took a liking to bottle caps. Any dirty, smelly cap would do. The only rejects were those crushed by a car tire, everything else was fair game. I’d come home with pockets stuffed full of beer and pop caps and meticulously wash them in a pail before adding them to my motley collection. If it is true that “you are what you collect,” I was on a somewhat bumpy path. My mother eventually put the kibosh on the bottle cap collection and I moved on to other more “feminine” collections, such as spoons and tiny ceramic cats.

I’ve noticed that sometimes collections are begun intentionally and other times they seem to adopt us. I have a bell collection that I never wanted. I had received a bell as a gift and made the mistake of saying how much I liked it. On every special occasion for the next several years I inevitably received at least one “interesting” bell, until I finally had the courage to spill the truth and beg for the well-intentioned gift-givers to cease.

It is difficult to know when enough is enough with a collection. But when it has taken over every available shelf, countertop and dresser, it could be time to re-evaluate. Like my mother, I’ve had many collections over the years – small leather-bound books, Royal Doulton mini-mugs, Asian antiquities of various sorts, mud men – okay, so perhaps the collector gene is stronger than I thought. However, I luckily also possess the “stop-collecting” gene and can terminate as eagerly as I commence, letting the collection languish or dispersing it in a garage sale.

Still, Christmas collectibles are in there own special category. As we haul out those boxes of precious ornaments passed down through generations or added to with decisive intent each year, visions of Christmases past and Christmases future dance in our heads, imbuing our festive baubles with heightened sentimentality.

Though even some of those are less precious than others. I have a collection of Wedgwood Christmas ornaments that my mother gave me each year for eighteen years until they mercifully stopped producing them. She fancied the collection so much that she decided to collect them as well. I like the pale blue disks well enough, with their embossed Santa, reindeer, bell, tree or whatever, but the bonus is that their value has increased substantially over the years, so I now think of them less as a collection than an investment. Collections sometimes have that lovely outcome.

(The U.S. Antiques Roadshow recently estimated the value of an original 1964 Santa puppet used in the creation of the animated cartoon Rudolph the Red Nosed Reindeer at $8,000 to $10,000. Now, there’s a lucky bit of memorabilia.)

To be really worthwhile, though, I believe good collections must have rules to make them more challenging – and my Santa collection has strict ones. There can be only one Santa per year and nobody – but nobody – contributes to the collection. Also, the Santa of the year must be unique and of a certain size (although that rule is flexible).

The toughest part of the challenge? If I purchase a Santa too early in the season, I worry about finding another one that is better; on the other hand, as the days tick by, I grow concerned that any truly special Santa will have been snatched up already – and the year’s search will have been a dismal failure. Still, in twenty-plus years, I’ve always been successful, and in recent years I’ve kept my search local, finding the perfect additions in Erin, Belfountain and Orangeville.

One summer I found a charming Santa at the Aberfoyle Antique Market – a small plain toy made of leather and painted red and white. At the bargain price of four dollars it was a deal I couldn’t pass up and, because I immediately made a new rule that purchasing a Santa before October didn’t count, I was also able to pick up another one in my annual hunt.

My mother’s nutcracker collection was in an entirely different vein. It started gradually, a nutcracker here and a nutcracker there. Each one inadvertently had a small flaw that needed gluing or touching up to make it perfect, and it was the repair work that seemed to give her the greatest enjoyment.

When White Rose Nurseries used to sell plain, ten-inch wooden nutcrackers for three dollars, I picked up a few and gave them to her at Christmas. The next year the nutcrackers emerged dressed and painted with a dazzling array of headgear, beards, moustaches and sequined accoutrements. The collection was on.

Unfortunately, White Rose closed within a few years and my mother had the opportunity to create only five of her own masterpieces. She stopped the collection at thirteen when, in her eyes, the display was perfect, and moved on to tiny sitting Santas: their legs had to be straight out, a tall hat was preferable, and each one could be no more than three inches high. Tough rules to follow when you’re hunting for a last-minute stocking stuffer.

For me, collecting is all in the chase. Following the rules, finding a piece, negotiating a price, and the final decision as to whether I really do need just one more. Aren’t three or four or forty or fifty enough? Maybe yes, maybe no.

Artist and author Howard Hodgkin has said, “A collection makes its own demands. I think of it rather as an illness.” Illness or not, once bitten by the collector bug, it’s a fun itch to scratch.

With Christmas around the corner, I anticipate pulling the box marked “Santa collection” from the shelf in the storage room, enjoying each familiar bearded face and looking forward to the 2008 addition.

My mother won’t be calling to check on the status of my collection this year. She died in the spring. Since then, most of her collections have been dispersed. Some sold en masse, some divided and sold separately or given away. Her nutcrackers, though, will be displayed together for one last time this Christmas, before going home with various family members.

I know my collections, too, will come to that end some day, but for now I plan to surround myself with the people and things I love and enjoy collecting new holiday memories – undoubtedly the very best collection of all.

The little Christmas village that grew 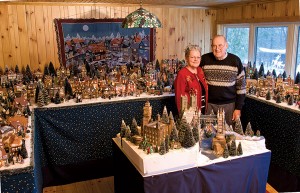 It takes Joanne and Donald Sheridan two weeks to assemble their Christmas “metropolis” of 140 buildings and more than 200 people and 400 trees. Photo by Pete Paterson.

It was 1989 when they first set eyes on a village made by the Department 56 Collection, a Minnesota company that specializes in giftware, collectibles and holiday decorating.

“We thought the village would make a nice display for my jewellery store window,” says Donald, a watchmaker at the time. He thought of selling the villages through the store, but eventually decided to take the collection home. The limited-edition villages, figures and accessories are finely crafted porcelain and over the years the Sheridans have collected Christmas in the City, North Pole, New England, Dickens Village and the Hunting Lodge – creating what is more like a metropolis than a village.

“We have 140 houses, more than 200 people, churches, fences, choir boys, a bride and groom in a horse-driven carriage, and probably a minimum of 400 trees – ten different varieties,” Joanne says. The hunting lodge, surrounded by a forest of trees where wild animals lurk, boasts a waterfall and a mountain large enough for a house to nestle on it. “I have to buy ‘snow’ in bulk every year,” she admits.

The Sheridans have spent a substantial amount of money on their winter wonderland addiction and they are still going strong. “Last year we bought five new houses and some horses,” Joanne says with a laugh. 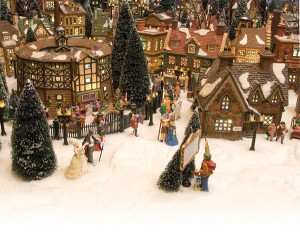 “We have 140 houses, more than 200 people, churches, fences, choir boys, a bride and groom in a horse-driven carriage, and probably a minimum of 400 trees – ten different varieties,” Joanne says.

It takes the couple two weeks working every day to set up the Christmas extravaganza and they spring into action after Halloween. The displays monopolize all four walls of a large sunroom that they added to the house “mostly for the collection,” Joanne says, although she adds the room is not quite large enough and she has to find space in other areas of the house.

Donald built the bases – tall tables on wheels that they slide over the existing sunroom furniture and skirt with festive fabric. Then comes the arranging of the villages and hooking up the electrics – lights in the buildings, street lamps, flashing Christmas trees, skaters that glide across a pond, and a Coca Cola bear that ambles around the hill.

Along with the many friends and neighbours who come by to admire the couple’s impressive efforts, “Every year I have an open house for thirty to forty people I work with at De Havilland Aircraft,” Joanne says. “I’m a Christmas freak. I never decorate at any other time of the year, but at Christmas I go crazy and decorate the whole house. The neighbours call us the Griswolds.”