David Scott: One of our 2008 Local Heroes 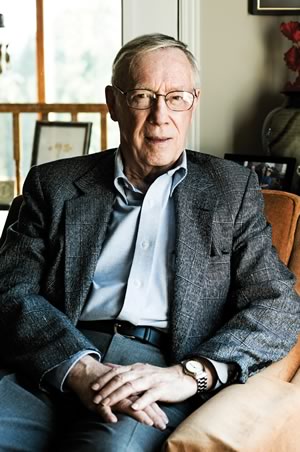 Dr. David Scott has dedicated his life to Headwaters. Photo by Pete Paterson.

He’s not a hero. Dr. David Scott has dedicated his life to Headwaters. In more than five decades of community service, he has been our surgeon, chief of staff at the hospital, a board of education trustee, a member of Orangeville’s planning advisory committee, instrumental in the development of our new hospital and a fierce advocate for social services. And that’s just a start. But he’s not a hero.

Forget that, apart from winning awards, he has them named after him. Set aside the thousands whose lives he has touched. Ignore the immense respect he enjoys throughout the community. David Scott is just your regular, lifelong Orangeville guy.

The second generation of Scotts to practise medicine from an old house on First Street in Orangeville, David graduated from medicine at the University of Toronto in 1956, and general surgery in 1962. He practised general surgery in Orangeville from 1962 until 1997, and continues to provide surgical assistance at Headwaters Health Care Centre. Beyond his duties at the hospital, he has served as chair of the Wellington-Dufferin District Health Council, and on numerous provincial and national health-care advisory committees.

Closer to home, Dr. Scott chaired the Headwaters Area Linkage Committee for many years, bringing together the leadership of all area social services. This group was a precursor to the current Headwaters Communities in Action initiative.

Still setting the standard at age seventy-seven, Dr. Scott was named the 2008 recipient of a provincial Senior of the Year award for outstanding community service after age sixty-five. He was also named the 2008 Town of Orangeville Senior of the Year. He continues to be an instrumental player in the region’s efforts to recruit new physicians, and can often be found taking medical students on tours of either the hospital or the area. In what is perhaps the clearest indication of his ability to inspire a younger generation, one of his own children has also gone into medicine.

Peer recognition came with the establishment of the Dr. Scott Award, presented annually by Headwaters Health Care Centre. It celebrates individuals or groups who make an outstanding contribution to health care in the region.

And as if all that weren’t enough, these days he’s also serving as honourary chair, together with his wife Huda, and local businessman J.D. (Doc) Gillies and his wife Nancy, of the “Building Dreams Together Campaign.” It will fund construction of a new facility to be shared by Theatre Orangeville and Community Living Dufferin, which supports people with developmental disabilities. (Huda, by the way, is no slouch herself when it comes to community service – she has served on the board of Community Living Dufferin since 1970.)

A patient, soft-spoken man, Dr. Scott is nonetheless quite capable of getting his point across and, in typically modest fashion, the prospect of being called a Headwaters hero doesn’t sit easy.

“I’m uncomfortable with this whole ‘hero’ thing,” he says. “This community has been very good to me and over the years I’ve just done what I could. There are all sorts of people who deserve recognition for that and never get it.”