“It hurts every time I hear that another soldier is dead. I know the pain their families are going to experience.”

Valerie McGrady makes her contribution to the community every moment of every day. Her son, Corporal Matthew McCully, was killed when he stepped on a bomb in Afghanistan in May, 2007. He was twenty-five. Now, Valerie wakes up each morning to a collection of cherished keepsakes, and the pain of a lost child. Her unchosen, undeserved contribution begins anew.

Matt (who went by Matt McGrady until he returned to using his birth name at age nineteen) grew up in Orangeville. As a youngster at St. Peter’s Elementary School, his real passion was for clubs, over the years as a member of Cubs, Scouts and Venturers. 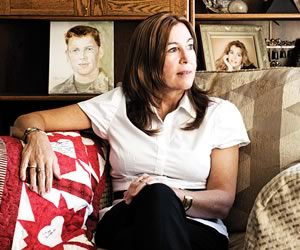 “I encouraged him to join clubs because he was serious and liked to learn,” says Valerie. “I was a single mom at the time and Venturers especially gave him good male influences. The clubs contributed to him ending up in the military. That’s where he learned to be a leader. He was also very neat and tidy as a child. The other kids would make a big mess, but Matt’s toys would all be put away. So he already had that when he entered military life.”

“Matt was eleven when I became single,” she continues. “He was the oldest and became a father figure to my younger kids. Ever since he was little, he liked to know how things work. He’d read books to figure it out, and had a great memory, so if the lawn mower broke, Matt would fix it. He always seemed older than his years.”

Over the summer between grades 11 and 12, Matt worked in a factory, and Valerie says, “He knew he didn’t want that. He saw how hard it was for me getting by. I encouraged all my kids to be something.”

Between August 2003 and January 2004, Matt did his first tour of duty in Afghanistan, serving as a driver and signaller. “The first time was Kabul,” Valerie says. “They were doing more peacekeeping then, and it wasn’t as violent. I was worried, but not that worried.” Records from the time show Matt to have been a self-starter with outstanding technical knowledge. He “was the first to assist other detachments,” putting in extra hours to do so.

“Matt was a little different when he came back from the first deployment,” Valerie recalls. “He respected Canada more. He saw a lot of poverty over there. He also talked about the heat – ‘like a sauna,’ he’d say.”

After his return to CFB Petawawa, in the fall of 2006 Matt was chosen to be part of the Operational Mentoring and Liaison Team. This group trains Afghan soldiers, and its members are chosen based upon their physical, mental, technical and interpersonal skills. “They also have to be people who know the risks,” Valerie adds.

In February of 2007, Matt left on his second deployment. “There was a lot of training before they went,” Valerie recalls. “I was a lot more worried than the first time. I knew the risks, and knew it meant going on patrols into the rural areas.” If Matt was concerned, however, he wasn’t showing it. “He believed in the mission, and he was proud to be a soldier. He really felt that they could achieve peace and security there. I also got that from many of his military friends. They all want to make a difference.”

Matt’s letters and e-mails home were sparse after he left. “I would get upset, but his friends have told me that many of them are the same. They’re not allowed to tell you very much anyway.”

On May 25, the unthinkable happened. As he walked near Nalgham village, west of Kandahar, as part of a joint Afghan-Canadian patrol, Matt stepped on an improvised explosive device. Another Canadian soldier and an Afghan translator were also wounded.

As Matt’s body was returned home and preparations for a military funeral got underway, Valerie says she was “glad for being in shock. It got me through. Otherwise I don’t think I could have stood or talked or functioned.”

“The community really came through though,” she goes on. “We were amazed at the compassionate response, and all the help.” In particular, Valerie notes CFB Petawawa, the Royal Canadian Legion, Tweedsmuir Presbyterian Church, Wal-Mart, Sobeys, Bluebird Café, Tim Hortons, the Orangeville police force and the town’s public works department. “There were also hundreds of local people sitting outside the church, who came to be part of the funeral. Others donated to Scouts Canada in Matt’s name.”

Strangers from across Canada also stepped forward to offer their support. Valerie received dozens of floral tributes, e-mails, cards and letters. A woman in Mississauga sent her a painting of Matt, as she does for every soldier who dies. Two groups sent hand-made quilts constructed of squares created by individuals from across the country.

Now that some time has passed, does Valerie feel any differently about Canada’s role in Afghanistan? Thoughtful for a moment, she says, “I support our troops. I still believe in what they’re doing, and the peace and stability they’re trying to achieve. They’re making progress, and good work is being done. I do wish other countries would come, and not just in the safe areas. They need to take a more active part.”

Now living in Mulmur Township with her husband, Neil Weise, Valerie says mending from such a tragedy isn’t easy. “It hurts every time I hear that another soldier is dead. I know the pain their families are going to experience.”

Matt’s name has been added to a newly refurbished Orangeville cenotaph, unveiled this fall with an honour guard from CFB Petawawa in attendance. Matt’s father Ron McCully, who lives in British Columbia, has been working on establishing a charitable foundation in Matt’s name. Valerie is writing to soldiers who don’t get mail. “Also, when I asked the soldiers what they need, they said they wanted Tim Hortons’ coffee coupons, so I’d like to organize something there,” she says. “It’s my quiet way of healing.” Later, gently, she adds “Matt and I were very close. It’s been very painful.”

Matt McCully’s status as a hero is clear. Valerie McGrady’s sacrifice is no less absolute, no less awe-inspiring.