By late afternoon on November 23, 1967, just about everyone in Shelburne was chuckling. It was laughter borne partly in relief that a bank robbery had ended in their town without anyone getting hurt. But even more it was the laughter that comes with the bemused realization that life is indeed stranger than fiction.

Until this day, the only experience the good people of Shelburne had with bank robberies had come from television or movies or books, where the bad guys had a script; where they had drawings and blueprints; where entries and exits were timed and sequenced and the getaway was mapped out in advance. But if Shelburne’s stickup man ever actually had a plan when he took on the Toronto Dominion Bank some forty years ago, it quickly petered out in a series of makeshift modifications, and the only loss to the bank was the price of a cup of coffee.

In the beginning: A serious drama 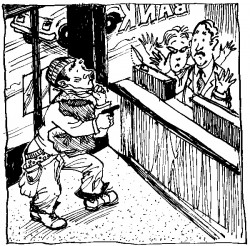 No one was laughing at the bank when the affair got under way, especially not the teller, Mary Matthews. Of the three bank employees on duty at the time, she was the only one at the service desk and hence the first to be confronted by a man of medium height with his head jammed into a nylon stocking. In any other setting he simply would have looked ridiculous – with the stocking’s shaded foot hanging down like the ear of a Bassett hound. But any impulse to laugh was quickly squelched by the sight of the gun in his hand. It was a .25 calibre Beretta and whether or not it was loaded, Mary was not about to find out the hard way.

To conceal his voice, the stocking bandit handed her a note: “Give me all your money.” Hardly original prose, but given his soon-to-be-revealed shortcomings, it is no surprise that creative writing was not one of the masked man’s strengths. As it turned out, his attempt to keep voice identification out of the equation was the first of several planning failures, for just seconds into the heist he felt the need to speak sharply to the bank’s accountant, Eric Shaw.

“Keep your hands above the counter or I’ll shoot!” he ordered Mr. Shaw, who had come to the counter to help Mary Matthews extricate cash from her drawer – and press the alarm button. Revealing his voice in order to silence the alarm was probably a worthwhile trade-off, but it would be the last spontaneous strategy to work in his favour. 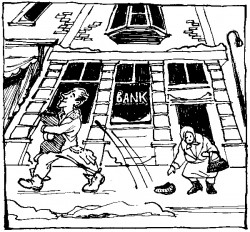 His troubles began with the money. The holdup man had brought a paper grocery bag to carry away the booty, arguably evidence of advance planning for it would draw less attention out on the sidewalk than, say, a canvas bag or a leather satchel. (In 1967, the ubiquitous backpack was still well in the future.) Unfortunately he’d failed to allow for the laws of physics and the thin paper obliged him to support the bag with attention-getting care. Worse yet, it was entirely unsuitable for the many rolls of silver he couldn’t resist taking with him. These he stuffed into his pockets, a choice that quickly dropped his trousers to half-mast.

Although his luck held and no one came into the bank during the stickup, the robber’s butt-first exit through the front door did not exactly set a new standard for keeping a low profile. With legs spread to keep his pants up, one hand awkwardly peeling the stocking from under his hat, the other protecting the bag of cash and vaguely pointing the pistol at the bank employees, the now unmasked man made it to the sidewalk uninterrupted.

Yet it was neither his cargo nor the caricature he’d made of himself that drew attention out on the street. That came when his hat fell off and a helpful lady went out or her way to retrieve it, but he walked away so quickly she was unable to catch up with him. Being a typically responsible citizen of Shelburne, she took the hat into the bank, confident that the people there would know the negligent owner and keep it for him until his next visit. 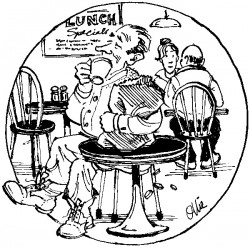 After recovering from dismay at her unwitting involvement in the robber’s escape, the lady reported that he had walked west on Main Street and then turned north. What she did not know – nor did anyone else at this point – was that another unusual step in this increasingly plan-as-you-go event was now taking place.

The holdup man, it seems, had looped back to Main Street where, not far from the bank, he’d sat down in a lunch room by the town hall and ordered coffee! Just what part this ploy was intended to accomplish in this less-than-perfect crime was never fully explained. The charitable view was that the protagonist chose to adopt a pose of cool nonchalance because his “wheelman,” parked near the Gamble car wash (if indeed there ever was a wheelman), had apparently had a change of heart and decided not to play. In any case, the bank robber had not only lost his hat, he’d now lost his ride too!

When in doubt, hitchhike 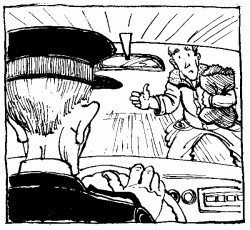 It’s not entirely surprising that our bandit turned to hitchhiking as his next best option for exiting Shelburne. In the sixties, hitchhikers were a common sight, not just here in the hills but everywhere, so it’s understandable he thought he might cadge a lift to make good his escape. After all, he had already written a new chapter in the annals of crime by robbing a bank and then popping in for a coffee nearby.

Still, a hatless man on a cold day, a man with bulging pockets and dangerously sagging pants struggling to protect an overstuffed paper bag, should have expected to attract some attention. As it turned out, the driver of the very first car to respond to his extended thumb had a practised eye for what was normal, and what was not, in downtown Shelburne. It was Chief Lemke in the town cruiser. Sure enough, the bandit got a ride – to the county jail in Orangeville, just in time to face the magistrate before court closed for the day.

At the remand he was immediately granted bail, perhaps because the bank got all its money back (minus the price of the cup of coffee) or possibly because of the reasonable assumption that he was just not the type to engineer a successful disappearance.

Despite the court’s leniency, however, nobody showed up to bail him out. Combined with the dim view a judge later took of the whole adventure, this final nobody-loves-me letdown gave the failed bandit more than ample jail time to reflect on his sins, and on the real possibility that Shelburne’s banks are protected not just by Ontario’s law, but Murphy’s Law as well.

Because the bank robber in Shelburne used a weapon, Chief Lemke was obliged to report the incident as a “violent crime,” even though it ended peacefully and with no particularly negative results (except for the bank robber). Since the Shelburne incident, armed bank robberies have resulted in the names of other communities in the hills being added to the “violent crime” rolls maintained by Statistics Canada, including Orangeville, Caledon East, Bolton and Inglewood. Even so, such incidents remain relatively rare. According to the StatsCan data, these hills continue to be one of the least violent regions in all of North America.