I thought it was normal to pick your dinner from the garden.

When he was in Grade 10, Roberto Fracchioni recalls being invited to a friend’s place for a spaghetti dinner. “I knew it wouldn’t be like my mum’s,” he says, but nothing prepared him for the overcooked pasta flooded with canned tomato sauce. He chuckles as he recalls having no idea what the yellow powder was that his friend sprinkled onto his spaghetti from a blue cardboard cylinder.

Our local version of renowned chef and local food advocate Jamie Kennedy, Fracchioni is making quite a splash for himself. The executive chef at the Millcroft since 2005, he also writes a regular column for a local newspaper, has a show on Rogers Cable called Country Cooking and his monthly culinary classes at the Millcroft are sold-out affairs. He’s a high energy, charismatic thirty-something with a silver-palate resumé that includes stints with some of the province’s finest restaurants, among them Scaramouche, Canoe, Auberge de Pommier and Jump in Toronto and Niagara’s Inn on the Twenty.

Twice voted Toronto’s best restaurant by Gourmet magazine, Scaramouche was Fracchioni’s first culinary job. He had given up his career as a design engineer to study cooking at George Brown College and was still a student when he tapped on the kitchen door at Scaramouche. A fellow who was chopping bones to make “jus” answered his knock, says Fracchioni.

“I explained to him that I wanted to speak with chef Keith Froggett about a job.” The fellow asked Fracchioni a few questions before introducing himself as none other than Froggett, and indicating that he could use help that very night. “So I went home, got my knives, put on my whites and came back,” recalls Fracchioni, adding, “I think he hired me because of my moxie.”

If it were anyone other than Fracchioni telling me this story, I wouldn’t have believed it. But his infectious smile and good nature totally engage me as we sit at one of the Millcroft dining room’s white-linen-clad tables. The spring sun reflects off the surface of the millpond outside the foot-thick window sills that hint at the age of Caledon’s most exclusive inn. Recently purchased by Vintage Hotels, the Millcroft is the newest member of the group’s stable, which includes three Niagara-on-the- Lake inns: Pillar and Post, Prince of Wales and Queen’s Landing.

We sip strong coffee from pure white cups as I ask Fracchioni about his signature dish. “It would be my Easter pasta,” he responds with little hesitation. Called tortéi, the pasta is folded in a manner typical of Casa Dei Fracchioni, his parents’ small hometown about an hour south of Milan. Casa Dei Fracchioni has a population of about eight in winter, according to Fracchioni, but in summer it grows to about eighty. “I think of it as the Muskoka of Milan,” he explains. 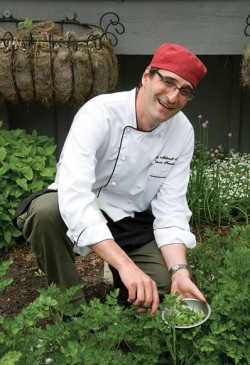 Chef Roberto cooks with “flare” in the Millcroft kitchen, and gathers fresh herbs from the inn’s own kitchen garden. Photo by Pete Paterson.

Fracchioni fills the pasta with ricotta cheese, a little Parmigiano and stinging nettles that he gathers from out behind the Millcroft. “In the early spring the nettles are tender and easy to pick,” he says. But it isn’t the nutritious nettles that pose the challenge, it’s the folding. “I’ve only been able to teach one other cook to make them,” admits Fracchioni. About a finger long, the little bundles come together with a series of twists. “If you don’t get it right, they fall open when cooked.” Because he has to make them himself from sprouting nettles, tortéi has a very short season.

Easter pasta may be his signature dish, but it isn’t his most memorable meal. That distinction goes to the meal that inaugurated his polenta pot. Polenta is just cornmeal, but in the Fracchionis’ part of Italy, it’s epic. Problem is, you must have a good polenta pot, and they are hard to come by.

The centuries-old copper pots were expropriated by the metal-scavenging Italian government during WWII. But a few years ago Fracchioni managed to find one and have it shipped to Canada. He welded together a special oven, called a fogón, in his backyard, then cooked organic polenta and rabbit on a slow heat, with the pot nestled among the hardwood coals in the oven. He invited his extended family to share the feast. “It was honestly one of the best meals of my life,” he tells me.

But polenta aside, it’s Fracchioni’s use of fresh local ingredients that is attracting attention. He picks wild leeks and puff balls from the countryside nearby, but has yet to stumble upon morels. He uses fiddleheads and was delighted to find such a healthy supply of stinging nettles. He gets his greens from John Sutherland at Deerfields Nursery near Hillsburgh, and his “proteins” come from Rising Star Elk Farm near Hillsburgh and Jackson Foods in Orangeville. He uses Orangeville’s Woolwich Dairy cheese and potatoes from Gerry Reid’s farm in Mono.

Still, he saves his highest praise for the produce he sources from the Whole Village CSA on Shaw’s Creek Road in Caledon. (The CSA, or Community Shared Agriculture, produces fruits, herbs and vegetables without use of artificial fertilizers or pesticides.) Using these fresh local ingredients, he says, “guarantees that I will have a better product.” Moreover, he adds, “I sleep really well knowing that I’m supporting Whole Village. They can have a better quality of life.”

And at the end of the night when the last plate has been washed and the Millcroft’s contented guests have wandered off to bed, where does Fracchioni turn for his own sustenance? “I love Seven Stars in Orangeville,” he tells me. And at least half a dozen times a year he chows down on a burger and fries from Superburger near Shelburne. “I adore a nice greasy breakfast,” he adds. Orangeville’s Nifty Nook is also good but often too busy, so he usually heads over to The Pines in Garafraxa Woods for bacon and eggs. “But,” he says, “the eggs have to be fresh and the bacon can’t be reheated.”

Young, energetic, talented: why is this man still single? As he dons his signature homemade red chef’s hat, Fracchioni says it’s hard to have a relationship given the hours he works. “I’m a great boyfriend though – but only on Mondays and Tuesdays when I’m not working!”