To explain why I wanted to try fly fishing, I will tell you a story that Jim Wilson told me. Jim is the owner of Wilson’s Fly Shop at the Forks of the Credit in Caledon, which is where I decided to make my first foray.

Jim told me about a university student he knew who worked summers as a fishing guide. One time this student met a girl in a bar; when he told the girl that he was a fishing guide, she lost interest and walked away. So the next time the student met a girl, he carefully specified that he was a fly fishing guide, and she was enthralled. The mere mention of fly fishing was all it took. The student told Jim, “She immediately saw me as a tweed-wearing, scotch-sipping gentleman.”

I tell you this story not as an admission that I wanted to learn fly fishing to impress women, but for the same reason that Jim told it to me: to illustrate the difference in perception between fly fishing and, what I will call for lack of a better term, “regular fishing.”

Because I love the outdoors, I always thought fishing would be the perfect sport for me. But I had tried regular fishing plenty of times, and it had failed to stick. With its reputation as the haute version of angling, as the preference of fishing’s poets, aristocrats and ardent conservationists, fly fishing seemed much more promising. Probably the real explanation for why I was not a fisherman, I reasoned, was that I had never tried fly fishing. Surely I was a fly fisherman waiting to happen.

At the end of April, a few days after the opening of trout season, I donned my tweeds and headed out to the banks of the Credit River, where Jim set me up with one of his guides, Mike Warrian, to learn how to cast.

Mike demonstrated how to cock back my forearm, wait a few instants for the slack in the line to play out behind me and load the rod, then throw my arm forward to project the line across the river. 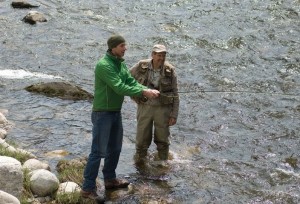 With a few instructions from Mike Warrian, Tim Shuff had the gist of the cast. “It turns out the more difficult part of fly fishing is not how you cast, but what you cast.” Photo by Pete Paterson.

I was disappointed to learn that fly casting is not difficult at all. I had expected a long afternoon of misfires and tangles, followed by the self-satisfaction that comes with mastering a physical challenge. But it turns out that anyone can learn to fly cast. The hardest part is the timing, which is why, as Jim had earlier explained, women generally learn fly fishing faster than men and now make up the sport’s fastest-growing segment.

My maleness notwithstanding, I had the basic cast down in little time, and also learned a variation called the roll cast. I learned how to mend my line – flipping it upstream to keep the sinking lure from drifting too quickly – and within a couple hours had mastered fly fishing’s fundamental skills. I stood on the riverbank thinking, “Great, now what?”

It turns out the more difficult part of fly fishing is not how you cast but what you cast. Mike explained to me that rods and line come in a range of weights, and that we were using a 5-weight for both. He showed me how the reel is spooled with a backing line, which attaches to the flyline, which attaches to a leader, which tapers down to a tippet, which is nearly invisible, like hair, or a single strand of silk.

He showed me the special knot that connects the tippet to the fly. He showed me a box of flies, some of which had bodies the size of pinheads and hooks the size of mustard seeds, which made me wonder what kind of fish they could possibly catch. I realized it requires a vast biological knowledge to figure out which flies a fish might be interested in at a given time.

As the afternoon passed, I fished some and Mike fished some, but we had no bites. Mike surmised that the weather was too cold, and that maybe it was too early in the season.

It was during this fishless melancholy that I realized fly fishing’s most fundamental and disappointing truth: that it is still just fishing. I’d been hoping for a revelation. Or at very least, a fish.

Fly fishing was too much like all the other fishing I’d done and possessed all the same flaws – notably a general lack of fish.

It was then that I understood that my dislike of fishing was not the fault of fishing itself, but of something in me. My expectation of fishing was that it would be like fishing appears on television – all action without the waiting around. I hadn’t ever been patient enough or attentive enough to be a fisherman. Nor had I been willing to put in the time without a guaranteed return.

“We should go just another ten minutes,” Mike said. “You never know. There might be one crazy fish.”

As I stood on the riverbank and watched Mike wade farther out into the river, I thought about how fishing is like bingo or slots – outwardly boring yet also strangely addictive. Mike felt for steady footing, water flowing around his legs, watching every riffle and eddy. He waded the river like a heron stalking a fish: all intense concentration and slow, methodical prowling. It seemed as if he’d forgotten that I was there, forgotten that even he was there, and that if I didn’t remind him, he would just keep going until dark, waiting for that one crazy fish.

Watching Mike reminded me of the first time I’d looked out at the Pacific Ocean and seen neoprene-clad surfers bobbing in the waves, and how I’d envied their intensity and belonging. In that moment I saw the gap between angler and river dissolve, and I wanted to step into those waders and dissolve myself.

Tim Shuff is a freelance writer. 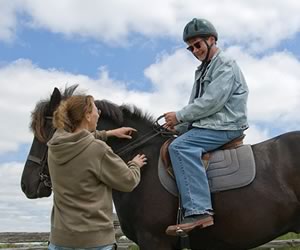 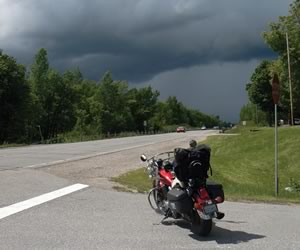