Sarah Bonikowsky of Mono Centre was a member of the Canadian women’s eight rowing team at the Beijing Olympics last year. Sarah’s father, Gary Bonikowsky, recorded the following entry in his journal.

Well, we’re sitting here in the dark, crowded belly of a huge Air China 747 out over the Pacific somewhere, and our Olympic adventure is almost over. We’re on our way home.

I’m still trying to process the events of yesterday and the meaning of their stunning conclusion. Stunned is the only word that seems to describe the state of consciousness that I found myself in as I stared blankly at the Jumbotron for a full two minutes at the end of the race of races. Who could have predicted such an unlikely scenario – the Dutch, who our girls had already handily beat, storming from fourth place in a late charge to take second and knock our team off the podium? It’s the stuff Olympic moments are made of. Only it was the wrong team! Three years of training and it all comes down to 8/10ths of one second! What must my little girl be feeling now? Is she okay?

The day did not start out like this. After their thrilling first place finish in the repechage, we arrived at the course much more relaxed than on Wednesday and quite hopeful of at least a bronze medal. Maybe even a silver if they could upset the Romanians. There was a much different feeling about the course today. I suppose it was what they call the Olympic spirit. All of the heats and semi-finals had been run. This was the summit to which all previous events had been leading. 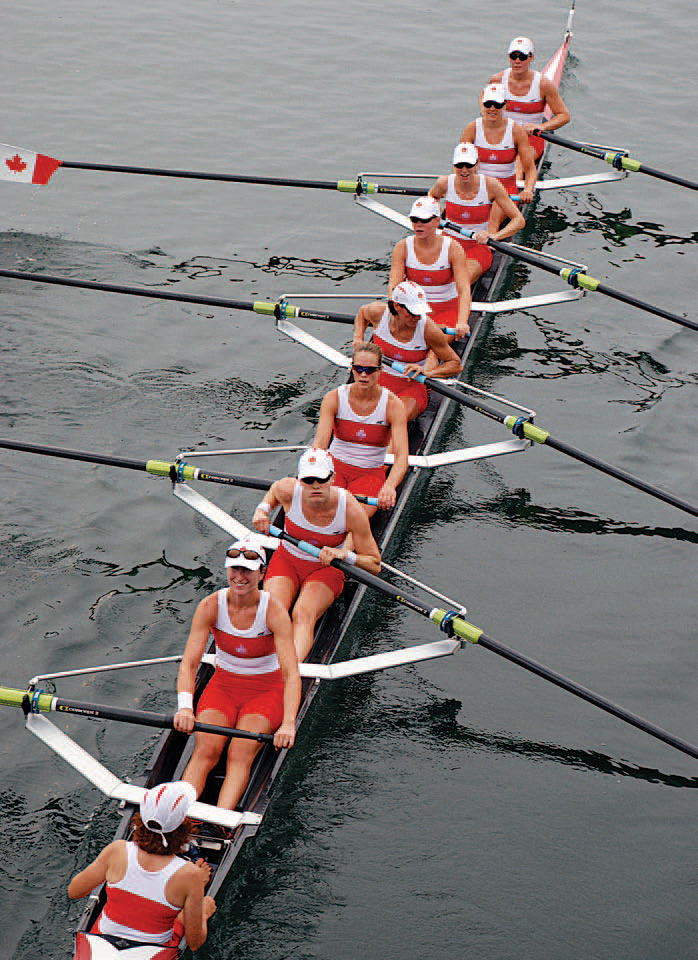 Sarah Bonikowsky, third from top, and the women’s eight rowing team prepare for competition in Beijing.

The first thing I noticed on our arrival was that, for the first time, the distant blue mountains ringing the course were visible through the everpresent haze. We had heard of their presence from Sarah, but this was the first time we had actually seen them. It seemed a good omen – as if they were there to witness the spectacle.
Throughout the afternoon races were won and lost. There was jubilation and there was disappointment, but in a very real sense everyone here was a winner – they were all in the final of the Games of the XXIX Olympiad. On any given day, any one of these teams at the pinnacle of their sport could, in a flash of brilliance, find themselves on the podium. That was the vibe – a general sense of expectation and hope, of coming together to play and compete – and a celebration of the best the sport had to offer. After all, these were the Olympic games.

The racing was close and intense. Unlike the heats of previous days, which were run back to back in relentless ten-minute intervals, this day there was a dignified break between races as medals were awarded, flags raised and anthems sung. This sense of pageantry and celebration had a calming effect, at least on the spectators, and there was a buoyant sense that, on this day, anything could happen. And, for the Netherlands, it did.

As the victors ascended the podium yesterday something unusual happened. In our four trips to Shunyi to watch the racing unfold we had not seen the sun, but now it dropped out of the low cloud layer behind us, bathing the podium and the banner-strewn grandstands on the far side of the course in golden light. The gorgeous, multi-coloured Olympic banners across the way were beautifully reflected in the calm waters of the course now fallen silent. It was the perfect moment in time – except the wrong team was standing on the podium.

I found this somewhat disturbing. In fact, it seemed almost cruel under the bewildering circumstances.

Anyway, these were among the thoughts and images that nagged at my consciousness on the long, silent bus ride back to Beijing. Why had this been allowed to happen? Why weren’t our girls standing up there bathed in sunlight? If I were God, I surely would have arranged things differently. But I’m not, and that’s probably a good thing for everybody else on the planet.

It wasn’t until this morning, walking pensively back to our apartment after emailing my reluctant race report home from Canada Olympic House that the light came on. That post-race heavenly glow was no cruel mockery. It was God saying, “It’s okay. I’m still here. And I meant this for good. Trust me.”

I thought back to that devastating race in the Olympic Qualifier in Munich last fall. It seemed like a disaster at the time. But if the boat hadn’t been strengthened and training intensified as a result for the Late Qualifier in Poland this summer, they probably wouldn’t have even made the Olympic A Final.

But make it they did. And yesterday they put in a world-class performance. Isn’t that enough? 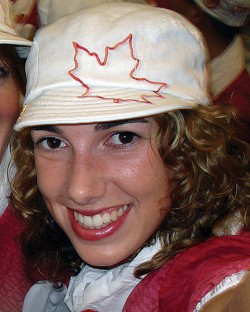 Sarah Bonikowsky of Mono Centre was a member of the Canadian women’s eight rowing team at the Beijing Olympics.

As I sat here trying to reconcile this odd mixture of disappointment and gratitude, I was once again reminded of that passage from Ecclesiastes that I have trundled out so many times as a message of encouragement: “The race is not to the swift…” Well, having viewed that passage from both sides now, I thought I’d better look it up and read it again in its entirety. I was surprised by what I found.

“I returned, and saw under the sun, that the race is not to the swift, nor the battle to the strong, neither yet bread to the wise, nor yet riches to men of understanding, nor yet favour to men of skill; but time and chance happeneth to them all.” Ecclesiastes 9:11.

Of course, what appears as “time and chance” to us, is really God’s “working all things together for good” beyond the scope of our limited vision. And I guess I’m okay with that. Our life’s path, with its unexpected twists and turns seldom makes sense until seen in the rear-view mirror – often way down the road.

Also, I can’t forget that, while we were all focusing on one boat, there were six boats out there in that final race. That’s fifty-four souls out there racing for gold, not to mention their dedicated coaches, and I believe God is personally involved in every one of those lives. This Olympiad may be the best the world has to offer, but there’s always something much bigger and more enduring going on in the background, beyond this world’s glittering stage.

I cannot deny the temporal reality of the disappointment that nips at the edges of my consciousness when I forget to praise for that. But it is temporal. And it is mainly for Sarah anyway. She’s the one who did all the work. We just got to participate in the adventure. But the strength of character I saw in her immediately after the race has largely negated that disappointment. It was the struggles just to get there that were developing true character in her. And while an Olympic medal may have a certain cachet that can last an athlete’s lifetime, true character is for eternity. Her positive attitude in light of the day’s events revealed the heart of a true Olympian…and more.

About the Author More by Gary Bonikowsky

Sarah Bonikowsky of Mono Centre was a member of the Canadian women’s eight rowing team at the Beijing Olympics last year. After very promising trials, the team placed fourth in the fi nals. The next day, Sarah’s father, Gary Bonikowsky, recorded the following entry in his journal.
Show 1 Comment