As always, Mary Cunningham is last into the dressing room of the Hillsburgh hockey arena. That’s why her spot is at the end of the bench near the door. She’s not tardy by nature. On the contrary, Mary’s busy to-do list this morning has already included attending church and visiting her parents to help out and share a quick coffee – all before hockey. Now in fast-forward, she changes into her gear, laces up her skates, then impatiently eggs on her lingering teammates.

“Come on, let’s get out there, the Zamboni’s almost off the ice,” she urges impatiently. Despite the prodding, her long-time friend Betty McEachern is once again last onto the rink.

And so the scene unfolds, pretty much as it has every Sunday morning for the past thirty-five years in this typical small-town Ontario rink. Cunningham, however, and this bevy of pickup players are just about anything but typical.

They’ve reserved the same 11 a.m. ice time since the early seventies, when the original core of the “Hillsburgh Ladies,” some of them now grandmothers, first pioneered the idea of women’s hockey in the Erin- Hillsburgh area back when they were teenagers. Today, players range in age from mid-thirties to mid-fifties, with a few daughters of the original crew joining in when they’re home from school.

While younger, faster, better-coached female players have come along in good numbers since those early days, these women are still on the leading edge. Their sheer love of the game shows young up-and-comers how women can keep playing for many decades, just like men; and more important, how women can, in their own way, embrace the easy camaraderie so entrenched in men’s beerleague culture.

Still, you could say the Hillsburgh Ladies started out as an act of defiance.

“Girls can’t play hockey” is how Cunningham’s boyfriend bluntly put it back in the day. And that was all the motivation she needed to gather up some friends and book that first Sunday morning ice time. Cunningham showed up to her first game in figure skates.

“I remember being so scared that first time out. I hadn’t really played before and I wasn’t a good skater,” she explains. “Being farmers’ kids, we weren’t that rich. We had softball in summer, but we wanted a sport we could do in winter that we could afford. Hockey was it.” 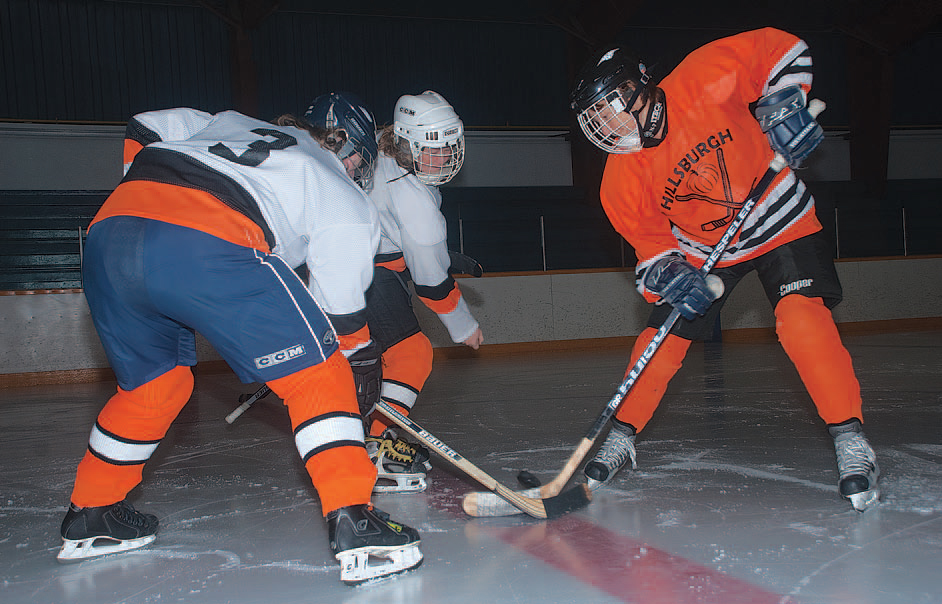 Many girls from those early years still lace up today: Sandra Prowse, Sharon Marshall, Lorri Taylor, Vera Longstreet and Betty McEachern. Without enough players for the usual five a side (plus goalie and a couple of subs), it’s usually three on three – white or orange sweaters. All this means there are few rules and lots of ice time, a perfect scenario for this free-wheeling group and their long-standing philosophy of putting enjoyment, friendship and exercise ahead of competition.

“We were never like many of the girls today who’ve played with the boys and had real coaches from the time they were five or six,” says Taylor. “We went from figure skates to ‘boy’ skates.”

“The problem with us,” adds Longstreet, “is that by the time we could get a coach, we were too old to listen.” It’s impossible to go more than a minute in this group without a good wisecrack. And that’s just the way the Hillsburgh Ladies like it, although Cunningham argues, “It may be a stretch to call us ‘ladies.’”

In fact, these women have to think twice when asked about their official name. It’s not the sort of thing they fuss over. “Hillsburgh Ladies” just happens to be what the rink manager wrote down on the ice schedule thirty-five years ago, and no one has ever bothered to change it. A fitting little anachronism.

“The point is, our Sunday mornings have never been about being competitive. It’s just fun. It’s a Sunday morning skate. It doesn’t matter who comes out or if there’s somebody new that’s never played before. There’s no pressure from us,” says Taylor. In other words, hot-doggers, aggressive types and players who take themselves too seriously need not apply. 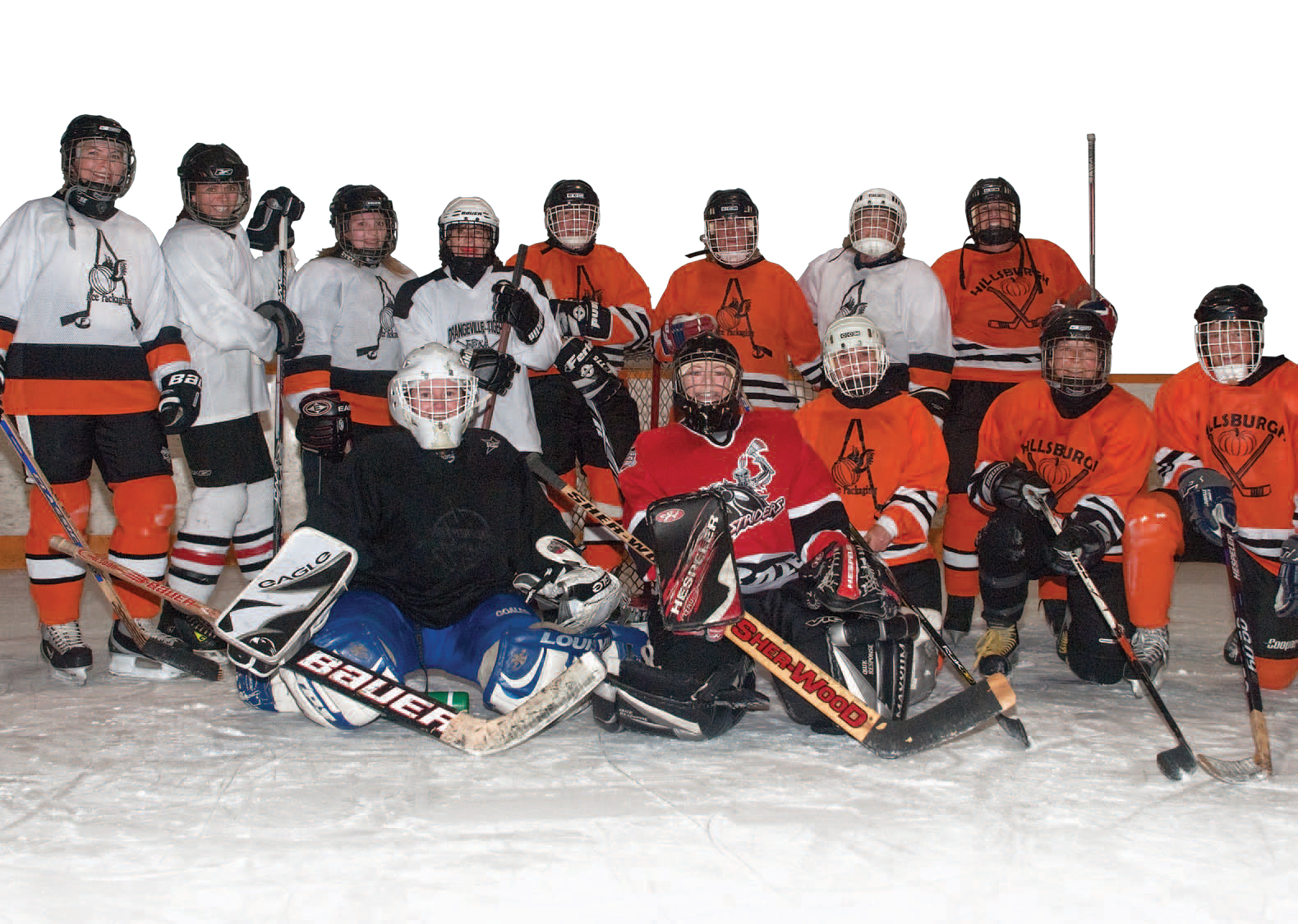 On and off the ice, the Ladies know how to poke fun at each other and themselves, without judging or criticizing. The familial comfort with each others’ flaws, the sarcasm, the laughter – it all seems to be at least as big a draw as the game itself.

“I remember this one game. I’d just joined the team and had only been playing a couple of years,” said Janet Eagleson, also an award-winning fantasy hockey/sports writer. “I decided I wanted to practise my quick start – sort of sprinting with short choppy steps from a standstill. But I just fell flat on my face without a soul near me. Someone skated by silently and tapped me on the butt. Back at the bench, someone finally blurted out, ‘What exactly was that?’ And everyone burst out laughing, including me.”

There’s a strong feeling of trust within the group and it’s not their way to be effusive about how deep their friendships go, though their bonds clearly extend well beyond the arena doors.

“We’ve had people lose family members, have first grandchildren, or deal with breast cancer. All sorts of life occurrences, we offer support or we celebrate without turning it into a big girlie thing,” says Eagleson. When teammate Sharon Marshall was diagnosed with breast cancer, Longstreet and Cunningham held a baseball tournament to raise the $2,000 each required to enter The Walk to End Breast Cancer. (Cunningham is now in her fifth year as a participant in the event.) And when Marshall first began playing again, no one would touch her on the ice, no matter how many goals she scored. Their first instinct was to protect her.

Eagleson notes the team’s connections spill over into their daily lives, too. “You get your hair cut by the stylist on the team. Mary is the bank manager for many girls. One woman’s husband is the meat manager at Hillsburgh Foodland. It’s a community thing, so there are real connections both on and off the ice.”

Underlying it all, there seems to be a genuine appreciation for what each woman brings to the game, both as a player and as a friend. 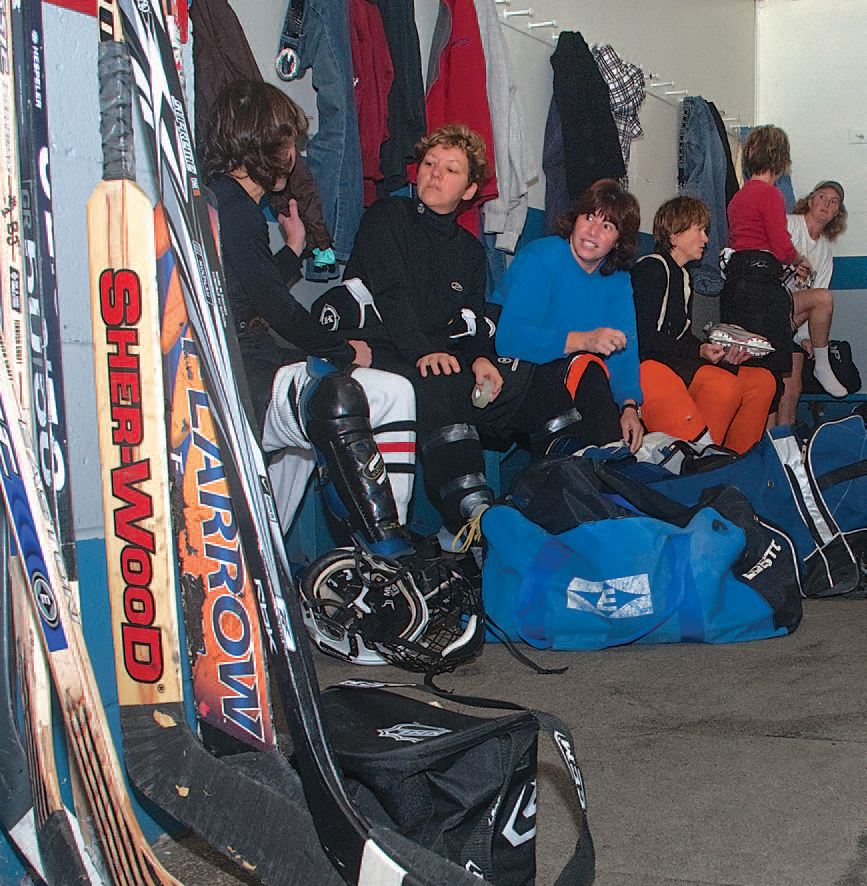 There is total consensus that Cunningham is “the Cheerleader,” particularly for her pre-game pep talks. With her petit stature and no-holds-barred attitude, Chris Langman has become known as “the Rabid Chihuahua” – an interesting visual. Taylor is dubbed “the Encourager,” because she frequently points out good plays by opponents, even as she fends off their advances.

Laid out flat in front of her own goal, Taylor is teased by Longstreet, “the Mouthpiece,” who wants the moment photographed. Chris Tucker, a new player, is “the Laugher” – you’ll often hear her long before you recognize her behind her cage. Sandra Prowse is the team “Cherry Picker” for her habit of sitting in front of the opposing goal, waiting to put the puck in the net. Others are quick to qualify this dubious title with the explanation that Prowse’s badly injured hip and knee make skating difficult. “Yes, that’s true,” says Prowse. “But I did it before the injury too.” More gales of laughter.

On this Sunday, McEachern lives up to the tenacity of her nickname, “the Terrier.” The diminutive 54-yearold executes a very Gilbert-Perreaultlike end-to-end rush in the final minutes of the game, culminating in a wrist shot that beats the goalie’s outstretched glove. Sweet.

The members of this grab bag of true characters travel from as far away as Mansfield, sometimes taking back routes around closed winter roads, to make their Sunday morning skate. Although many play in other leagues, their Sunday commitment is clearly about more than getting extra ice time. Everyone agrees that the sense of camaraderie among the Hillsburgh group is unique, and not something they’d easily give up.

About three times a year, the Ladies all don sweaters of the same colour to compete in tournaments, from Ottawa to Hawaii. “It’s fun to have the opportunity to take our skills to the next level,” says Eagleson. “But even then, our easy-going approach carries over. At tournaments, we’re there to work our tails off, for sure, but it’s still all about having fun. Even so, we’re pretty good when we really start playing together.”

“In some ways we’re getting better with age,” adds goalie Mary Grace Blair, who was once shelled with fifty shots in single game at one of the team’s early tournaments. As Taylor is quick to point out, though, in years following the Ladies made the finals. 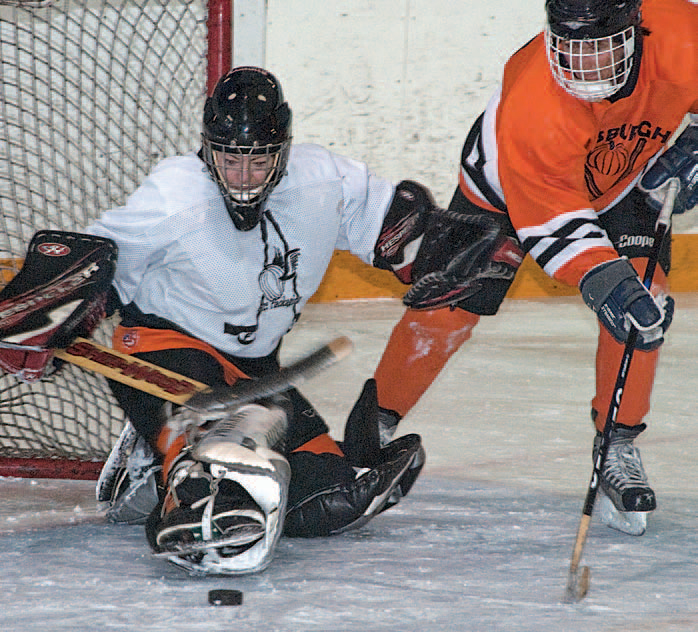 However, Cunningham and her teammates all agree that it’s getting more challenging to compete against the younger players who have had the advantage of better, earlier training. And in tournaments, there just aren’t enough older women players to justify a separate “masters” division, as you might find in men’s competitions. Still Cunningham is not ready to give up yet.

“For me, one of the drivers is to keep up with the younger ones coming through,” she says. “I like to hear them say, ‘No, you’re not fifty-five!’”

“I think we’re the first generation of women hockey players who got involved and kept it up,” says Longstreet. “There aren’t a lot of us and as you get older, there are things you start to give up. But for us, this group is not one of them. We just keep going.”

A buzzer marks the end of yet another Sunday morning pickup game. As the Zamboni rolls onto the ice, the Hillsburgh Ladies snake down the corridor, sticks in hand. The ruckus of locker room talk begins and, as with beer leagues everywhere, a good portion of it is not fit for print. Copious belly laughs ensue. Tucker’s gregarious chuckle rings above the crowd. I lean over to McEachern as cans of golden liquid refreshment snap open around the room. “Nice goal,” I say. She shrugs off the compliment. “What was the final score,” I ask. “Or does anyone actually keep count?”

“No, it’s not important,” she responds with a warm smile, then turns to offer up a cold one. “Care to join us?” Who wouldn’t?

If you’re interested in joining in the Hillsburgh Ladies’ Sunday morning game, Mary Cunningham suggests you show up at 10:30 a.m. to play, or at 11 a.m. to watch and chat with the players to see if it’s something you would enjoy.

To find out more about women’s or girls’ hockey, ask about leagues at your community arena.